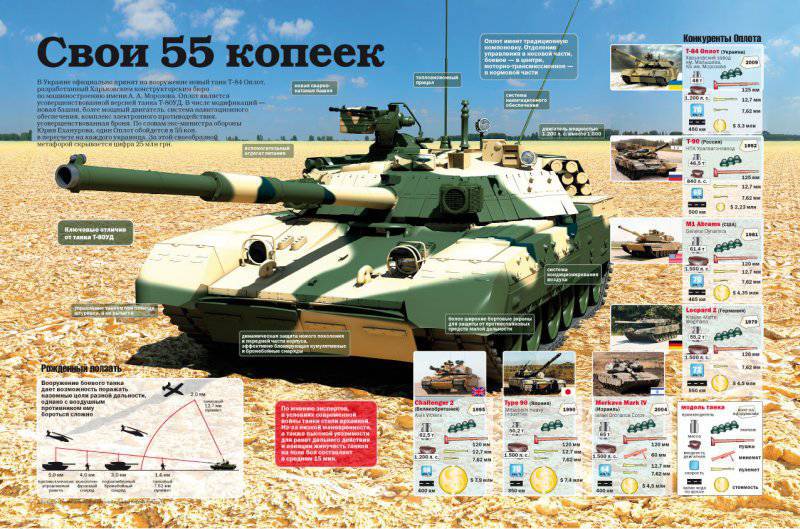 The process of development and production of heavy types of armored vehicles in Ukraine has a closed cycle. As soon as the contract signed in 1999 between Pakistan and Ukraine on the supply of 320 tanks T-80UD, Ukrainian tank building companies have repeatedly participated in tenders for the right to manufacture new tanks for Malaysia, Turkey and Greece. But, unfortunately, almost until 2011, all attempts to sell lots of new Ukrainian tanks did not have a positive result.

At the same time, the State Export Control Service of Ukraine posted reports on its official website, according to which the state was very actively engaged in exporting armored vehicles. At the same time, most of the equipment sold during the 2005-2011 period was in the stockpiles of arsenals.

During this period, Ukraine has sold more than 6 hundreds of tanks (to be exact - 618). Thus, in 2005, 62 vehicles were sold, of which 25 was delivered to Azerbaijan, 16 was received by Georgia, and the 21 tank was sent to Algeria. In 2006, the number of exported tanks was 38 units, of which the Democratic Republic of Congo received 20, the United States of America 1, and Azerbaijan the 17. In 2007, 155 tanks were sold, approximately Kenya and Georgia received an equal number of vehicles (77 and 74 units, respectively). In 2008, Ukraine exported a 34 tank, of which only one was delivered to Georgia, and all the rest went to Kenya. In 2009, the state did not export armored vehicles at all. In 2010, the largest number of vehicles was supplied for the entire period - 216 tanks, of which 115 went to Sudan, America received 1, and 100 were sent to Congo. 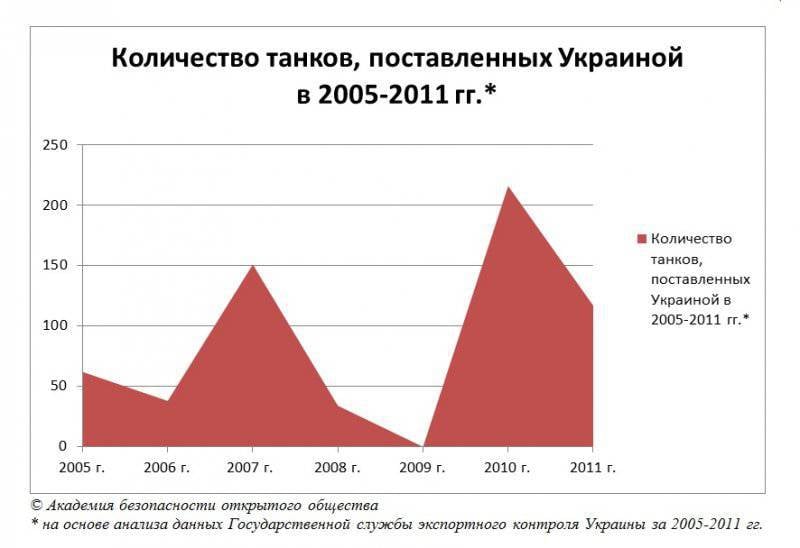 Such a high popularity of T-72 tanks is explained very simply: the machines of this type are one of the main mass battle tanks of the second generation, which have proven themselves well in the world market. At that time, thousands of T-1 units were in the Ukrainian arsenals of more than 72, and besides, Ukrainian tank-building and repair enterprises had good opportunities to repair and modernize them, exporting this particular type of tank was most likely (of course, provided that a solvent buyer existed ). But we must not forget that in the conditions of the rapid pace of write-off of T-72 states neighboring with Ukraine and their promotion on the world market, as well as obsolescence (moral and physical) technology, there is fierce competition in this market segment.

It is necessary to pay attention to the regional distribution of Ukrainian supplies of armored vehicles. Oddly enough, African states have become the main buyers of Ukrainian tanks lately. For example, five countries in Africa - Algeria, Kenya, Congo, Sudan and Ethiopia for seven years were sold 483 tank, which accounted for more than 78 percent of the total supply. So, in 2005, Algeria received an 21 tank, in 2006, the Congo - 20 machines, 110 tanks received Kenya in 2007-2008, 160 tanks were transferred to Sudan in 2010-2011, and Ethiopia received 72 machines in 2011 a year. In second place in terms of exports of Ukrainian armored vehicles became the CIS countries. During this period 133 tank was sold there (21,5 percentage of supply). For example, Azerbaijan bought 42 cars in 2005-2006, Georgia received 91 cars in 2005, 2007-2008. And only two tanks, presumably for the purpose of studying, were bought by the Americans.

Note that in the 2011 year, it was reported that Ukraine had signed two major contracts for the supply of armored vehicles. So, in the middle of last year it was announced that a contract was signed for the export of 200 modernized tanks T-72. Initially there was information that Ethiopia was the buyer, the contract amount was called at the level of 100 million dollars. The State Export Control Service partially confirmed this information. In particular, the fact that the buyer is really an African state. But as for the terms of the contract, there are certain differences from what was published in the press. Thus, the contract involves the export of part of the upgraded version of the T-72 - T-72B1, which need only undergo a major overhaul, and the second part of the machines is an upgraded version of the T-72-1 type. This type of modernization involves the installation of the Kharkov diesel engine 5TDFMA-1 instead of B-84. Thus, there are all the prerequisites for assuming that for the 2012-2013 period, 128 tanks will be exported.

No less large was the contract signed in September 2011 of the year between Ukraine and Thailand for the supply of 49 tanks "Oplot". The value of the contract is estimated at 240 million dollars. It is assumed that the start of deliveries will take place in the year 2013.

Thus, it is possible to make quite definite conclusions that, on the basis of data on well-known contracts, the Ukrainian side should supply 177 tanks for a total of about 300 million dollars.

It should also be noted that in addition to the finished equipment, Ukraine was engaged in the supply of components. In particular, in 2009, the state enterprise “Malyshev Plant” supplied the engine compartments in the amount of 62 units. In addition, the same company received orders from Pakistan for the export of spare parts for special equipment, the total amount of which exceeded 2,5 million dollars. Moreover, already this year it was reported that a large contract was signed between the Ukrainian enterprise and the Pakistani side for the supply of a large batch of Ukrainian-made power plants with the 6TD-2 engine.

In addition to all this, Ukraine was also engaged in the supply of light armored vehicles, which are much in demand in the world market. But in this direction there are certain difficulties associated with a large number of enterprises engaged in its production. So, only in Europe there are more than 30 companies in 19 states that are able to produce armored vehicles of various configurations and complexity. In such conditions, Ukraine, in order to successfully compete in the market, must really produce only the newest or deeply modernized light armored vehicles. At the same time, due to the high demand, there is still an opportunity to promote products for export, which with a great stretch can compete in the world. 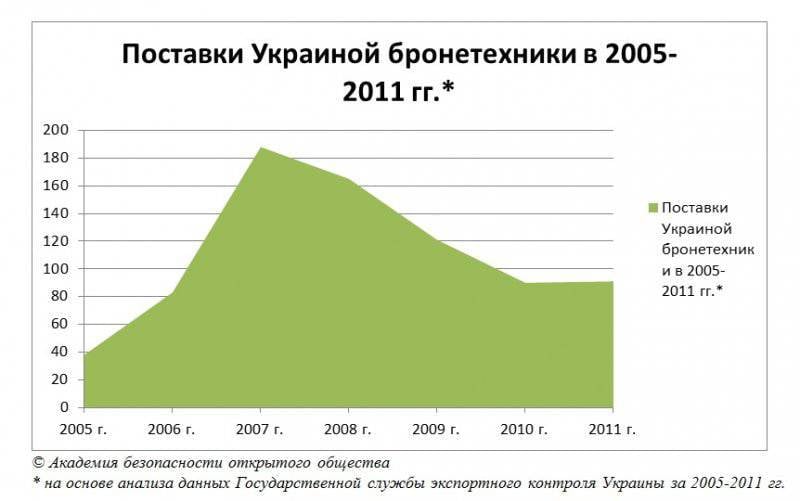 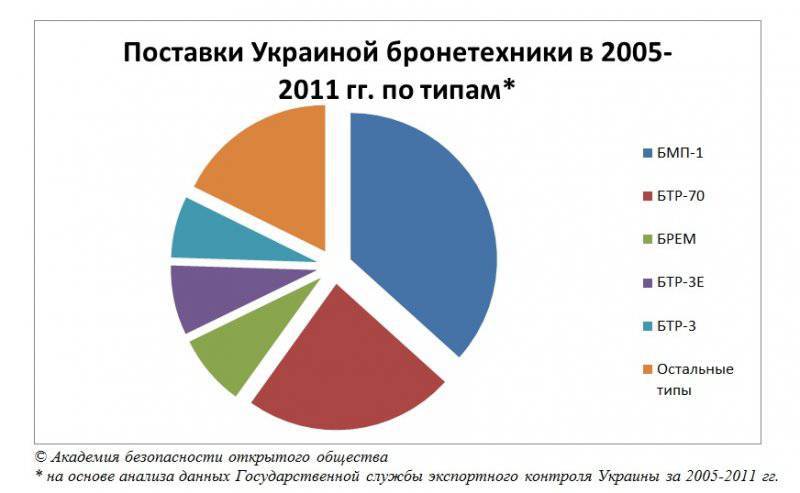 In the same way as with tanks, the main market was the African states, where 246 light armored vehicles were sold, which accounted for about 32 percent of total exports. The second place is occupied by the CIS countries, to which Ukraine exported the 241 machine (31 percentage). Three leaders closes the Middle East market, where 214 units of armored vehicles were delivered (about 28 percent). This is followed by Asia - 64 machines and about 8 percent of sales. In addition, 11 machines were sold to the United States. 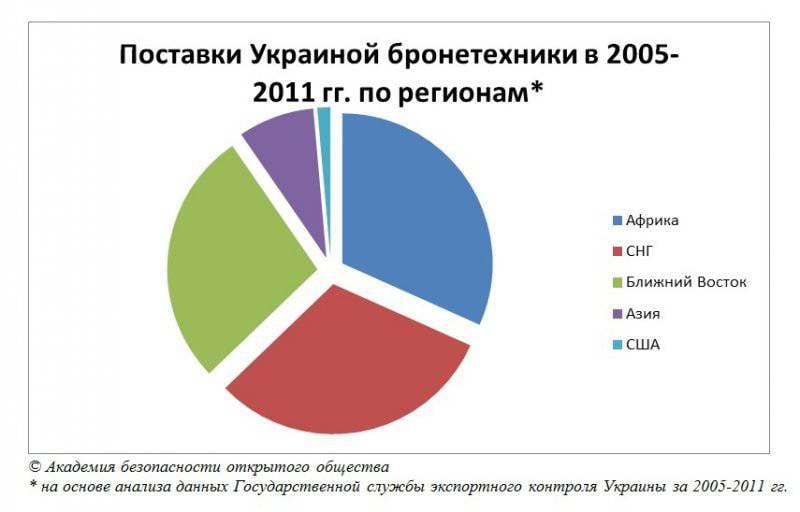 In the field of supplying light armored vehicles, Ukraine also has major contracts. In particular, one of the most ambitious can be considered a contract signed between Ukraine and Iraq, the cost of which is estimated at more than 550 million dollars. According to the terms of the agreement, the Ukrainian side for 3-3,5 of the year should supply Iraq about 400 armored vehicles, the main among which is the Ukrainian development - the BTR-4. In 2011, there was information that Ukraine had signed the second major export contract for BTR-3 Thailand. In particular, in the middle of this year, the media reported that the 48 vehicles BTR-3, the total cost of which is 270 million dollars, is ready for shipment. In total, 223 armored vehicles should be supplied.

Ukrainian enterprises, in addition, were engaged in the modernization of armored personnel carriers. So, in particular, in 2009, the Ukrainian Malyshev Plant and Egypt signed an agreement on the modernization of 200 OT-62 Topaz (tracked armored personnel carriers, which are analogous to the Czech-Polish BTR-50). The Azovmash enterprise, which was connected to the program for the creation of domestic-made armored vehicles as a hull manufacturer, also dealt with independent deliveries of tankers for Kazakhstan and Russia. The company "Rosava" is also actively engaged in the export of tires for law enforcement agencies in many countries. So, in particular, last year it won three international tenders: Romania (the contract amount is estimated at 550 thousand dollars), Syria (230 thousand euros), Turkey (650 thousand dollars). A Joint Stock Company "Dneproshina" is engaged in the production of tires for BRT-3Е1 and jointly Matador produces truck tires used by the defense industry in the countries of the Alliance.

In addition, at the beginning of 2011, a contract was signed between Ukraine and India for the export of a test batch of ZTD-2 engines for the BTR. Thus, it is hoped that in the future Ukraine may take part in large-scale equipment modernization programs for India. An agreement was also signed between Ukraine and Kazakhstan on the production of 100 BTR Ukrainian development. The contract amount is about 150 million dollars. If we take into account the fact that Kazakhstan actively cooperates with many states, then it is quite possible to assume that Ukraine will be able to wage an active competitive struggle in this market.

The Ukrainian state quite successfully exports motor vehicles, the bulk of which is made by AvtoKrAZ. Moreover, these machines are supplied not only as independent products, but also as platforms for various systems and installations. So, in 2009, 272 vehicles were supplied, of which 12 was sent to Egypt, 5 bought Myanmar, 15 - received Indonesia, 86 machines - Kazakhstan, 61 - Turkmenistan and 49 - received Uzbekistan. If we take into account that the average cost of one such car is about 70-90 thousand dollars, the result is a good amount - about 24 million dollars. And this is only for one year. For seven years, automotive equipment has been supplied to various regions and countries, from Poland and Russia to Equatorial Guinea and Nigeria.

Thus, summing up all the above, we can say that Ukraine has certain prospects in terms of the export of armored vehicles. Even in spite of the fact that the state mainly supplies equipment from Soviet times, this has its positive aspects. So, it allows you to get rid of obsolete models of equipment and provide enterprises with modernization packages. But this market segment is extremely narrow, characterized by great competition and small financial acquisitions. However, it is hoped that in the near future the situation will change in a positive direction, if we take into account long-term contracts concluded by Ukraine.