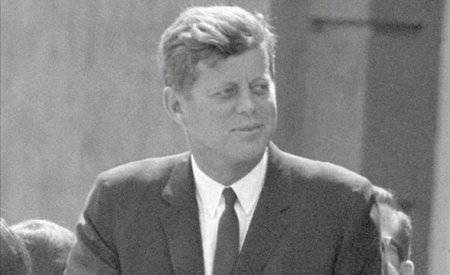 John Kennedy’s actions in the time of the Caribbean Crisis

Skillful actions of US President John F. Kennedy during the Caribbean crisis, which flared up exactly 50 years ago, have been elevated to the rank of the central myth of the Cold War. It is being built on the thesis that Kennedy, thanks to the military superiority of the United States and his steel will, forced the Soviet Prime Minister Khrushchev to capitulate and remove the missiles secretly stationed there from Cuba. As Secretary of State Dean Rusk said pathetically, America and the Soviets "looked into each other's eyes," and the Soviets "blinked first." According to the myth, Khrushchev lost everything, and Kennedy did not give up anything. Thus, the end of the crisis was the undivided triumph of America and the unconditional defeat of the USSR.

Naturally, the Kennedy victory in the battle of the Cold War, ambiguous both in its course and in its results, became a guide for American foreign policy. She deified military power and willpower, without putting diplomacy of mutual concessions into anything. She set the standard of rigidity and risky confrontation with villains, which was simply impossible to comply with - if only because this victory was not.

Of course, Americans have long been inherent in the rejection of compromises with the devils, but they have been compromising every now and then. President Harry Truman even suggested that Communist Moscow participate in the Marshall Plan. His secretary of state, Dean Acheson, later asserted that it was possible to deal with the Communists only by creating “positions of power” for themselves. And it was more or less the case until the Caribbean crisis, when Kennedy hypertrophied the force factor, and his successors were forced to resist even more compromise with these devils.

The perception of the Caribbean crisis - that Kennedy achieved success without retreating a single inch - was strengthened in political thinking and debate, both public and private. It manifests itself today, half a century later, in anxiety over concessions to Iran over its nuclear weapons or the Taliban in the context of their role in Afghanistan. American leaders do not like to compromise, and this is largely due to the reinforced misunderstanding of those 13 days in October 1962 of the year.

In fact, the crisis did not end in a fiasco of Soviet diplomacy, but in mutual concessions. The Soviets withdrew their missiles from Cuba in exchange for a promise by the United States not to invade Fidel Castro Island and remove the Jupiter missiles from Turkey. For reasons that seem obvious, the Kennedy clan has been keeping the Jupiter agreement a secret for almost twenty years and even then presented it as something unimportant. Scholars such as Graham Allison of Harvard University have been telling the truth for years, but their efforts rarely influenced public debates or meetings at the White House on decisive opposition to America’s enemies.

From the very beginning, the Kennedy people did everything possible to conceal the concession on the Jupiter. It began at a meeting of the brother of the President, Attorney General Robert Kennedy on October 27 with the USSR Ambassador Anatoly Dobrynin, at which the plan "Jupiter" in exchange for Soviet missiles was presented. He told Dobrynin: we will remove “Jupiter”, but this is not part of the deal and is not subject to disclosure. The Soviets removed their missiles, the United States removed the Jupiters, and the secret was kept 16 for years, until a short paragraph appeared in Arthur Schlesinger’s book that few people paid attention to.

Four years later, Kennedy's top advisers published an article in Time on the 20 anniversary of the crisis, which recognized the point of agreement concerning Jupiter. However, they did it in such a way as to diminish its importance, saying that Kennedy had already decided to remove the Jupiters from Turkey. Then, completely contradicting themselves, they recognized that the secrecy that surrounded that part of the deal that concerned “Jupiter” was so important that any leak “would have a devastating effect on the security of the United States and its allies.”

These Kennedy advisers were so faithful to their myth of triumph that most of them continued to spread it, although they themselves had long acted contrary to him. Most of them began to oppose the war in Vietnam, which Kennedy would have continued to lead, if not for the attempt. All of them began to be skeptical about the value of military power and military confrontation and became prominent supporters of the diplomatic compromise.

However, it was only in 1988 that one of them clearly and clearly recognized that for several decades he was hypocritical and the price of this hypocrisy was high. In his book Danger and Survival, Kennedy’s national security adviser, McGeorge Bundy, lamented: “This kind of secrecy had its costs. Keeping guarantees for Jupiter in secret, we disoriented our colleagues, compatriots, successors and other allies, "forcing them to come to the erroneous conclusion that" that Saturday it was enough to maintain firmness. " 26 years passed, but it remained in force.

It is amazing that the Russians did not reveal the truth much earlier. Arranged at a good time after the withdrawal of "Jupiter" leak could give Moscow two things. First of all, история the exchange of concessions would call into question the version of the complete defeat of the Russians. It doesn’t matter that Kennedy was already planning to disable the Jupiters and replace them with submarines with Polaris missiles on board.

Secondly, it would cause considerable turmoil in NATO, where it would be perceived as a betrayal of Turkey. Robert Kennedy even told Dobrynin that these fears were for him the main reason why the deal should remain a mystery. Dobrynin telegraphed Bobby’s words to Moscow: “If such a decision were announced now, it would seriously split NATO.” After the withdrawal of "Jupiter" Moscow could deliver such a blow. We can assume that the Soviets would be delighted with this opportunity.

Dobrynin fully realized how this myth negates the readiness of the United States to compromise. He told me about this at the end of 1970, when I worked at the State Department. However, he did not publicly announce this until the publication of his memoirs in 1995. “If Khrushchev had arranged [the leak], the resolution of the crisis would not necessarily be perceived as such an inglorious retreat.”

Why then didn’t the Soviets leak? It is likely - and even most likely it was so - that Khrushchev and his politburo never considered the possibility of a leak, because they could not know how the crisis would be presented afterwards - how weak they would look. On the day when the crisis reached a crescendo, even before he learned that Kennedy would offer to bring out the “Jupiter”, Khrushchev was ready to give up. He told colleagues that the Soviet Union "came face to face with the danger of war and a nuclear catastrophe that could destroy the human race." He did not think about "Jupiter"; he wanted to finish this story as soon as possible and sought to convince his colleagues that the promises of the United States not to invade would be enough to protect the power and prestige of the Soviet Union.

To test this conjecture, I contacted three of the living people who are most likely to know the truth: Sergei Khrushchev (Nikita’s son), Anatoly Gromyko (Andrei’s son, Minister of Foreign Affairs of the Soviet Union during the Caribbean crisis) and Alexander (Sasha ") The Immortals (who at the time of the crisis was an employee of the Ministry of Foreign Affairs, and later - the Minister). Everyone supported this theory, although they admitted that they did not know what exactly Khrushchev had on his mind. The Soviet leaders, they said, truly feared the US invasion of Cuba. None of them were embarrassed by my argument that at the time of the crisis the likelihood of such an invasion was zero. After the fiasco of operations in the Bay of Pigs in US political circles, this idea would have caused laughter. None of them admitted that information leakage was necessary to save the reputation of the Soviet Union. However, later on in the course of the conversation, each of them nevertheless admitted that if the exchange were known, it would have benefited the image of the Soviet Union.

While at 1989 in Moscow at a conference on the crisis, speechwriter and confidant Kennedy Ted Sorensen (Ted Sorensen) praised Thirteen Days as a precise chronicle of events. He was interrupted by Dobrynin, who said that the book does not mention “Jupiter”, to which Sorensen declared that Dobrynin was right, but at the time the deal was still “secret”. “So I decided to remove it from the text,” he said.

And the reporters covering the event decided not to record this exchange with remarks. The theme of "Jupiter" rarely surfaced in extensive foreign policy discussions in subsequent years. Moreover, the compromise is mentioned so rarely that the journalist Fred Kaplan (Fred Kaplan) was forced to interpret this point in his recent review of the latest book by Robert Caro about President Lyndon Johnson. Caro, with all his care, relied on sources praising Kennedy’s determination, and did not mention Jupiter.

For politicians, the idea of ​​a compromise, as a rule, does not delight - especially when it comes to US foreign policy. The myth of the Caribbean crisis has strengthened arrogance. Myth, not reality, became the yardstick of negotiating with opponents. Everyone was afraid of becoming a new Adlai Stevenson, whom Kennedy, their advisers, and their enemies had discredited for openly proposing a deal with Jupiter.

It cannot be said that Washingtonians vied to declare their desire to act according to the myth of a missile crisis, but it was an important part of the city’s life from the beginning of 1960 to 1990, as evidenced by both newspaper articles and conversations with friends. Few people wanted to be substituted, offering even soft compromises with opponents. When we (I then worked at the Pentagon) after the Tet offensive of 1968, on behalf of President Johnson, compiled a famous analysis of US policy in Vietnam “from A to Z”, we were not even allowed to consider possible options for a compromise with Hanoi. And there is no doubt that, at last, only such an avid cold blood drinker as Richard Nixon could leave Vietnam.

In order to offer compromises on negotiations on arms control with Moscow, it took uncommon courage. Even treaties on the trivial reduction of nuclear forces on both sides caused fierce battles in Congress. It is open today to admit that Iran can, under strict control, enrich uranium to militarily insignificant 5 percent — political suicide, although such enrichment is permitted by the Nuclear Non-Proliferation Treaty. And, although the Barack Obama team is negotiating with the Taliban movement, its demands are so absolute - the Taliban must lay down their arms and adopt the Kabul constitution - that no serious exchange of concessions is possible. If all this were serious, the White House should at least entice the Taliban with the prospect of the division of power.

For too long, US foreign policy has focused on threats and confrontation and minimized the role of compromise. Yes, a compromise is not always a decision, and sometimes a completely wrong decision. But politicians of all stripes should be able to openly and without fear explore the possibility of compromise, comparing it with alternatives. Compromises are unsuccessful, and in such cases, presidents can increase their threats or even use force. But they need to remember that even the adamant Kennedy found a compromise solution to the Caribbean crisis - and the compromise bore fruit.