Leonid Ivashov: “Russia through Putin’s lips proclaims a departure from the pro-Western vector” 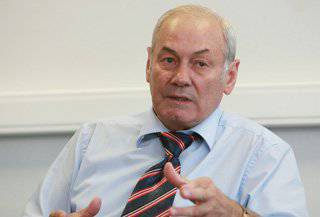 The first thing that should be noted as a result of the visit of a large government delegation and business representatives of Iraq to Russia, headed by the country's prime minister, is the reversal of Iraq’s policy from pro-American to pro-Russian. Americans for the majority of the population are occupiers, destroyers of their country and the main opponents. Today, these sentiments are transformed in the public consciousness into real politics. The Iraqi leadership has done a rather courageous act: despite the pressure, which is certainly present from the US and its satellites, it is trying to withstand and build an independent foreign and especially economic policy. Therefore, there was a natural turn to Russia.

There is a fear that Americans will impose sanctions

This should be attributed to the fact that Russia today through the mouth of Putin proclaimed a departure from the pro-Western vector of development to the Eurasian one. Apparently, all this needs to be linked, and this is quite a significant increment to our common Russian potential. I was at the round table of the Russia-Iraq Business Council with the participation of the Prime Minister of Iraq, and there is an invitation to Russian business from the government and business of the Iraqi Republic to come to replace American and British companies. Here the gates are wide open.

On the other hand, the Iraqi and Russian sides have an understanding that it will be difficult for business to work without security. The risks are too great, so in parallel with the business project, the issue of military security is being addressed. Therefore, Iraq turned to its traditional partner, Russia, in order to purchase modern types of weapons. This is also the courageous act of the Iraqi side. Of course, there is a fear that Americans will impose sanctions, perhaps against Russian or Iraqi companies. This need not be afraid.

In this regard, it is necessary to deal not only with trade, but also with a powerful geopolitical analysis of the processes occurring in the world, the situation in the region, forecasting this situation and launching plans to counter aggressive policies, plans to counter the destruction of the Middle East. Here we need geopolitical analysis, forecast and security planning, which was suggested by me as president of the Academy of Geopolitical Problems at the round table.

In parallel, it is necessary to launch comprehensive cooperation processes. The first is culture, education, joint science in mutually beneficial areas, sports joint events and so on. It is difficult for business to be friends, because it is a competitive environment, but all parallel niches for interaction and cooperation. Then Iraq will become our partner, and then - an ally (primarily in the area of ​​security) in the Middle East.

Syria can be broken, Iran can be stirred up and destabilized

It can be said that the result of the successful visit of the Prime Minister at the head of the delegation was a coordinated position on Turkey and on the Syrian events. It is very important. I will note his statement regarding Turkey. He accuses Turkey of aggressive politics. And Russia is talking about this, and Iraq is already talking about it. Without this visit, Iraq would be more restrained. There is one more thing. Of course, Iran’s support is important to Iraq.

In my opinion, in a joint position on Syria between the lines, the situation around Iran is also read. Syria can be broken, Iran can be stirred up and destabilized, therefore today it is necessary to gather forces ready together with Russia to bring stabilization to the region. This is now done.