WRI-2: how the machines of the nuclear apocalypse failed the "exam" in Chernobyl 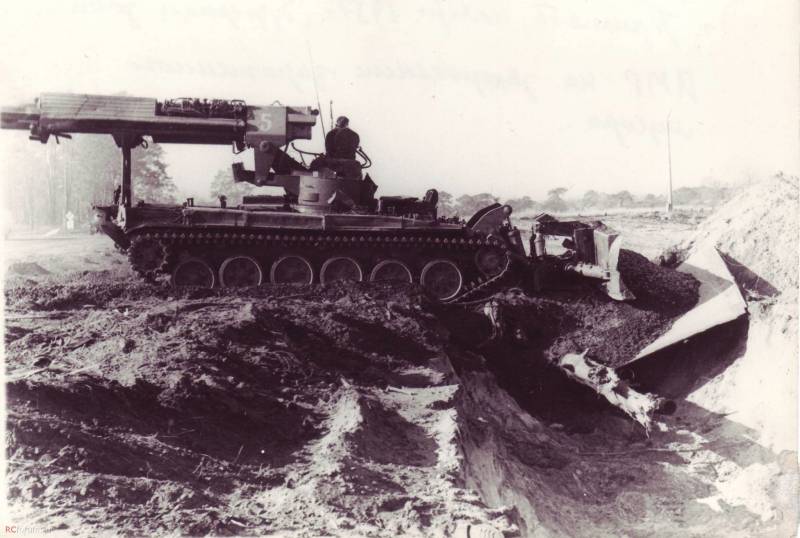 April 26, 1986 at the Chernobyl nuclear power plant. Lenin, the largest stories humanity radiation catastrophe. To eliminate the consequences, more than half a million people and hundreds of pieces of equipment were sent to the accident zone, among which were IMR-2 based on tanks T-72. However, these engineering obstacles, perfectly adapted to work in a nuclear war, gave up slack on the ground with the most powerful radioactive contamination. 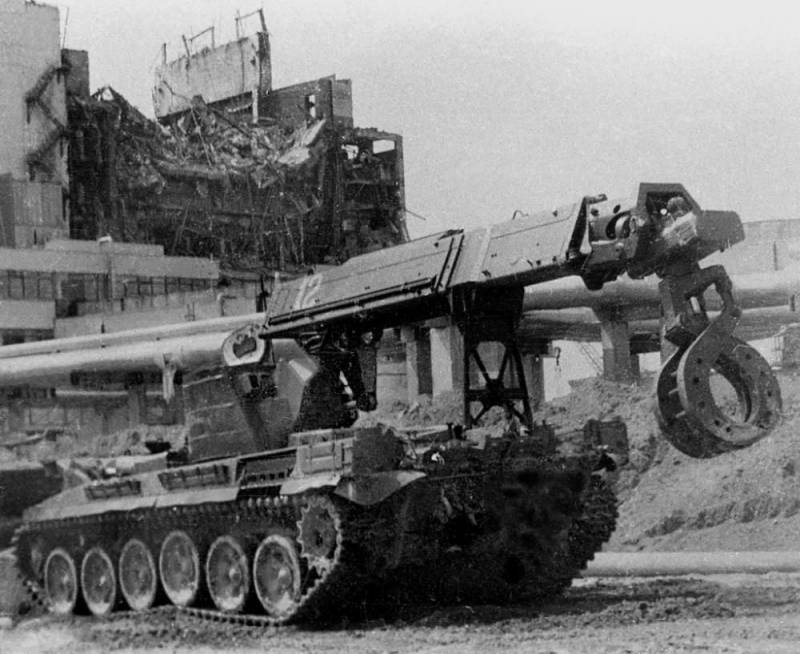 Looking at photographs and videos taken during the liquidation of the consequences of the Chernobyl accident, an association involuntarily arises in my head with some relatively fresh local military conflict - with the same Syria, for example. In both cases, artisanal armor was literally put on stream. Only some strengthened weak armor to protect against bullets and shells, while others - to protect against penetrating radiation.

And indeed, cars hung with lead sheets have become commonplace in the Chernobyl zone. But, if the modernization of lightly armored vehicles or the same trucks can be understood, then why did heavy WRIs go through this procedure? After all, they were considered almost the standard for working in conditions of strong radiation. This is true, but not quite. 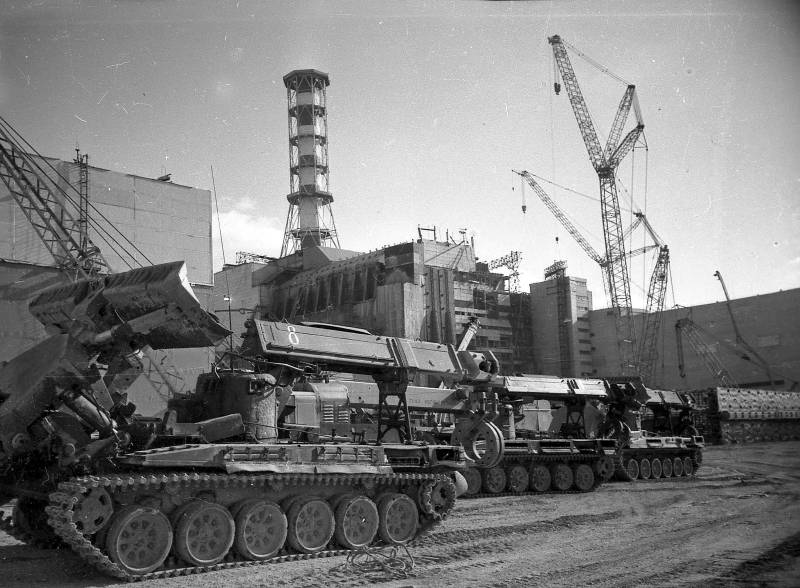 Equipped with lead protection IMR-2 during the construction of the sarcophagus over the destroyed reactor. Source: souzchernobylnsk.ru
When developing any type of combat vehicle, and the IMR-2 is also such, engineers actively use probabilistic laws. At the first stages of work, such parameters as the probability of meeting with one or another anti-tank weapon, the angle of fire, the probability of being hit in various conditions, including with different composition of the combat unit, and so on, are calculated.

A similar situation occurs with radiation. No one imagined that such a large-scale catastrophe was possible, so nuclear war was considered the main threatening factor. As a result, when designing the anti-nuclear protection of the IMR-2, the greatest attention was paid to the lower parts of the hull and the bottom, since the radiation should have come from the soil contaminated with a nuclear explosion.

In Chernobyl, everything turned out the other way around. Obstruction engineering vehicles were involved in clearing debris near the destroyed power unit, building a protective sarcophagus, breaking contaminated houses in nearby villages, uprooting trees in the Red Forest, where a large part of the radioactive fallout fell immediately after the explosion.

In all these operations, the radiation sources were not in the ground, but at a certain height - in the crowns of trees, the roofs of the power unit and houses. Radiation hit the most vulnerable place of IMR-2 - in the upper hemisphere. Therefore, thick lead sheets have become an almost indispensable attribute of this technique, working in dangerous places. But even this measure did not always help: inside the cars, the level of gamma radiation sometimes reached the mark of 15 R / hour (X-ray per hour) and even exceeded it. At the same time, for reference, a background level of up to 30 μR / h (micro-roentgen per hour) on average is considered a safe level of radiation, that is, the norm was exceeded by 500 times or more.

Subsequently, some IMR-2s went through a far from artisanal refinement, which made it possible to raise the level of protection to a factor of 1 times less radiation. 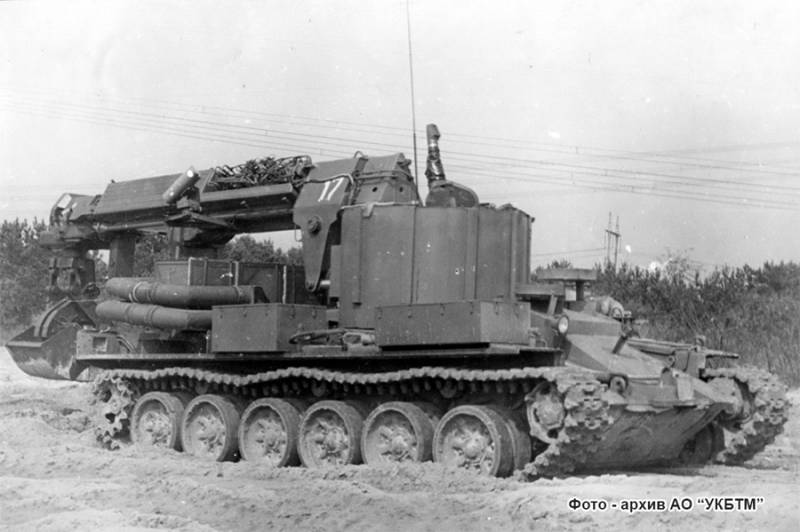 Upgraded IMR-2 with a factor of attenuation of penetrating radiation by 1 times. Source: archive of JSC UKBTM

At certain intervals, almost all equipment used in the accident zone was subjected to a decontamination procedure or, in simple terms, a total wash. Naturally, this was not done so that it could then be taken out and reused outside the radioactive lands. There was even no question of this - only burial or sending to the septic tanks for eternal parking.

The purpose of decontamination was more prosaic: to prevent the transfer of nuclides across the zone and wash away radioactive contamination from the surface and internal parts of the machines, at least to the level at which adhering dust and small debris ceased to produce a high level of radiation, which would be fatal for the crew. With this, the hero of this article had some problems.

The abundance of cavities, niches, moving parts and other external structural elements contributed to the dense jamming of dust, which could not be reached even with brushes and other tools. However, about the same difficulties were with the decontamination of other types of equipment - there are still no perfectly flat surfaces. But the matter did not end there.

In IMR-2, crew hatches are equipped with seals, which, during the operation of the filter-ventilation unit (FVU), which creates excess pressure from the inside, quite well protect against the ingress of all kinds of dust, gases and liquids. But in the case of a disabled FVU, the tightness of the hatch covers decreased sharply. As a result, when the car was washed, dousing it with a special compound, part of it, together with radioactive dust, got inside the car. And often these were not barely leaked drops, but whole streams that could even disable the machine control equipment. 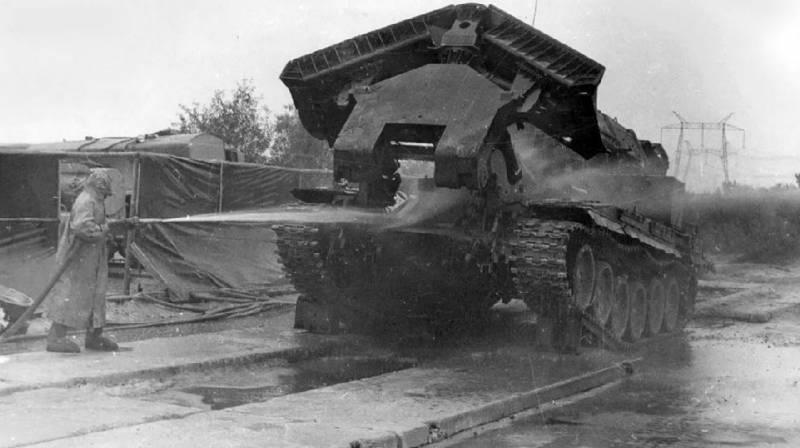 IMR-2 deactivation process. Source: voennoedelo.com
A separate headache was the engine air filter. Its very purpose suggests that it will be a radioactive dust concentrator, since tens and hundreds of cubic meters of contaminated air pass through it. But in the IMR-2, serviced cassette filters were installed, which had to be cleaned periodically. Measurements showed that before cleaning the background from the filter was on average 5 R/h, and after thorough washing it was about 3,5 R/h.

It would seem that the air supply system of the engine of the machine is isolated from the crew and does not irradiate it so much. But do not forget about the attendants, because someone should clean this filter. Thus, as part of studies of accumulated radiation doses among liquidators, it was found that some employees of the technical service, who were never involved in work on radioactive terrain, but served IMR-2, including filters, received up to 9 roentgens per month.

Here, of course, the cassetteless cyclone filters of the T-64 and T-80 tanks, which are scolded and condemned in every possible way, would come in handy. The passage of dust into the engine is incomparably higher, but contact with them must be kept to a minimum.

The wishes of the exploiters

From the foregoing, it becomes clear that the main requirements of both those who directly worked on the IMR-2 and those who collected statistics on the use of these machines are the strengthening of radiation protection and the implementation of measures to facilitate decontamination. In addition, there were a couple of other wishes.

Machines, although rare, could break down right during operation and lose speed. What to do in such a case? Outside - a deadly radiation background, but you can’t stay still either. As a rule, another engineering vehicle went to the aid of the broken ones, but in order to take the suffering in tow, someone still had to go outside and carry out the hitch. Based on this, it would be preferable to automate and mechanize the coupling so that neither the rescuers nor the rescued leave their equipment and are not exposed to excessive radiation. 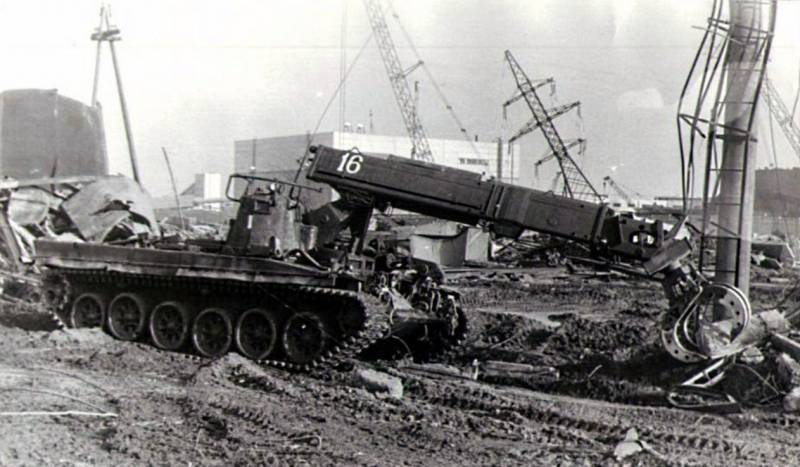 IMR-2 with enhanced protection at the Chernobyl industrial site. Source: drive2.ru
The second wish turned out to be a little specific, but not without reason.

It is prescribed to work in conditions of strong radiation contamination with closed hatches. In the Kyiv region, where the Chernobyl nuclear power plant was located, at the end of April 1986 it was already hot. It didn't get colder in May or June. When conditional +30 degrees Celsius and above are outside, with closed hatches inside the car, temperatures can rise up to 50 degrees. As a result, one of the crew members may feel ill or lose consciousness. To this may be added manifestations of radiation sickness, which also do not contribute to good health.

Therefore, it is desirable to have some kind of device to be able to open the hatch covers of the crew from the outside - apparently they suffered to extract the unconscious bodies of the operators, dragging them through neighboring open hatches.

There is no doubt that the claims against IMR-2 after being used during the liquidation of the consequences of the Chernobyl accident were a wagon and a small cart. But this machine was originally designed to solve completely different tasks: the evacuation of damaged or broken equipment from the battlefield, demining, clearing rubble or man-made barriers, and other things, including in the conditions of the use of nuclear weapons by the enemy. weapons She is like a fish in water.

What happened on April 26, 1986, no one imagined and did not lay in the backlog of engineering equipment, because it was not for nothing that even all kinds of robots and products of the space industry were used. So there is no fault of the IMR here. This once again proves that the creation of a completely universal machine is simply impossible, and some situations require specific solutions.