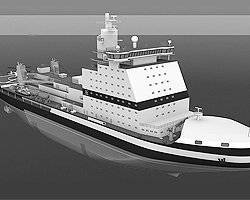 On Wednesday, Prime Minister Dmitry Medvedev took part in the laying ceremony of the keel of the diesel-electric icebreaker LC-25 (Icebreaker 8 with 25 MW capacity) at the Baltic Shipyard in St. Petersburg (part of the United Shipbuilding Corporation). The vessel should be built in five years and replace the old icebreakers of the Finnish construction 70 – 80-s of the last century.


Earlier, two Moscow and St. Petersburg icebreakers had already been laid at this plant, but of a medium type. Laid today, the icebreaker is larger and more powerful: 25 MW vs 16 MW.

“This is the first large icebreaker that Russia itself laid in this century. This is a landmark event. The icebreaker, which was laid down in the Baltic factory in the summer, does not count, because its will build together with the Finns, ”says press secretary of the United Shipbuilding Corporation Alexey Kravchenko to the VIEW newspaper. This refers to a skew icebreaker of an innovative project with a capacity of 7,5 MW, which was laid in July at the Baltic Shipyard near Kaliningrad.

As for the purely Russian icebreaker LK-25, it is intended both for self-guided ships and for operation as an auxiliary vessel as part of complex caravans along the Northern Sea Route. In many ways, the icebreaker is significantly different from the ships of the previous generation.

For the first time in world practice, a combined propulsion system was used, which ensures steady handling and maneuverability both in clean water and in severe ice conditions.

For the first time on ships of this class it is planned to install a cargo crane with a lifting capacity of up to 150 tons to perform underwater technical works in the areas of drilling and oil platforms and in the areas of laying underwater pipelines.

“LC-25 is a two-pack icebreaker. It will operate as a linear icebreaker for pilotage with full ballast. When he drops the ballast, his draft will decrease to about 8 meters, he will be able to work in the mouths of our northern rivers, ensuring the northern delivery, will be able to pierce ice in the right places near the ports, conducting caravans. One such icebreaker will replace two icebreakers - a small-sized and full-fledged linear icebreaker, ”says Alexey Kravchenko.

This new icebreaker can be named in honor of Viktor Chernomyrdin. Rosmorrechflot has already sent such a proposal to the relevant authorities.

Medvedev called the construction of a new icebreaker a gift the fleet and the staff of the enterprise. “We need to revive shipbuilding, the honor and glory of the fleet,” the head of government emphasized. The prime minister also counts on the speedy implementation of other orders for the Baltic Shipyard, which, according to him, “the company will have.”

On Wednesday, the Prime Minister also attended the ceremony of commissioning the scientific expedition ship Akademik Treshnikov. The flag on the ship, to the sounds of the national anthem of Russia, was raised by the captain of the “Academician Trёshnikov” Sergey Lukyanov. December 21 This ship will go to the 58 Russian Antarctic Expedition.

This is the first research vessel in the last 20 years, which was built at the Admiralty shipyards by order of the Federal Service for Hydrometeorology and Environmental Monitoring of Russia (Roshydromet).

In the United Construction Corporation today do not complain about the lack of orders for icebreakers. “Today, an icebreaker was laid on the 25 MW, soon, at least one more such icebreaker will most likely be laid. A week later, an icebreaker of a lighter class will be laid at the Vyborg Shipyard. It will be the Uk-16 icebreaker with an almost 18 MW capacity for operation in the Baltic and servicing in the port area. Three such icebreakers are planned to be built, ”says Alexey Kravchenko.

“We also plan to win the announced tender for the construction of two icebreakers for 7 MW and one icebreaker for 4 MW. They are needed for smaller ports and the southern seas, ”said Kravchenko. In addition, USC builds icebreaking or ice-class vessels. “These are supply vessels that provide raw materials, equipment and materials for equipment that operates on the shelf. No one in the world of such technology, except us, does not build, ”sums up the interlocutor of the newspaper VIEW.

As for plans to build the world's largest and most powerful nuclear-powered icebreaker at the Baltiysky Plant, this is an icebreaker LC-60 of the 22220 project with a capacity of 60 MW. On the icebreaker there will be a two-reactor power plant with the main source of steam from the RITM-200 reactor unit with a capacity of 175 MW. The ship's customers are Rosatom and FSUE Atomflot. Its construction is estimated at 37 billion rubles.

The two-draft design of the vessel allows using it both in the Arctic waters and in the estuaries of the polar rivers. The icebreaker will operate in the western region of the Arctic: in the Barents, Pechora and Kara seas, as well as in the shallower parts of the mouth of the Yenisei and in the Ob Bay area.

Russia, he said, remains the world leader in the construction of icebreakers. “Historically, shipping is under the most unfavorable conditions, so no one needs to teach us on icebreakers, we teach the whole world. In the Krylov Research Institute, the whole world goes to calculate the ice characteristics of ships. Despite the fact that they themselves have, as a rule, more powerful computers, more modern design bureaus and steeper shipyards, more serious scientific capabilities. But on ice issues and shipping in ice conditions, Russia remains a trendsetter, ”says Kravchenko.

The future of civil shipbuilding

“The industry has ambitious goals to achieve new successes in shipbuilding. It is a question of both product quality and productivity, and technology. This is very difficult, but we have no other way, ”Medvedev said on Wednesday.

According to him, the potential has not been wasted, it is in our power to save it. To do this, special attention should be paid to training and the use of modern technologies. In particular, ships must be designed in digital format. “Only in this case our shipbuilding has a future. I hope that this will happen, ”Medvedev said.

According to the Ministry of Industry and Trade, for almost 20 years, the state policy in the shipbuilding industry was limited only to the support of military shipbuilding. However, in 2006 – 2008, the situation began to change for the better when the Shipbuilding Industry Development Strategy for the period up to 2020 and for the future and the Federal Program “Development of Civilian Marine Technology” for the 2009 – 2016 years were developed and approved.

Russia decided to focus on creating high-tech, unique and small-scale craft for a specific customer with a high added value. The state began to regulate the priorities in the development of civil shipbuilding and form orders for the construction of such vessels.

One of the main niches for Russian shipbuilding in the coming and more distant years is the creation of technical means for developing the richest hydrocarbon deposits on the continental shelf of the freezing seas of the Arctic and the Far East. Therefore, it is necessary to create ships and floating equipment for the development and development of deposits, as well as vessels for the transport support of the Arctic region.

“If in the world today there is a decline in shipbuilding orders, many are sitting on starvation, are ruining, then we have the opposite. For example, in China, where 2008 thousand shipyards appeared in 2010 – 2,5 years, a third of them went bankrupt. Whereas almost all enterprises that belong to USC (around 100) have orders for several years to come. We do not even have enough people to fulfill all the orders that are, and then they will obviously be more. Therefore, we are now engaged in attracting personnel, ”- said the representative of USC.

However, the USC does not hide that far from all directions the situation is straightened. For example, in the construction of tankers Russia seriously lags behind its competitors.

“We simply cannot build empty giant troughs in 250 – 300 thousand tons just as cheap as South Korea and China, where the average temperature is + 12. In Russia, the climatic conditions are unfavorable, therefore our enterprises simply cannot work for half a year - the hands of workers freeze. To avoid this, it is necessary to build a tanker in a room the size of 12 football fields. But the heating of such a premise seriously increases the cost of the tanker being built. Therefore, in this niche we are not going to compete with them, ”said Kravchenko.

In addition, Russia needs to develop its own power systems in shipbuilding. “We are learning to build economical and modern engines. We do not hesitate to learn, we attract partners in order to draw from them the technologies that we can then develop on our territory, ”Kravchenko notes.