Facts and rumors about the CTR program - Cooperative Threat Reduction

October 12 2012
10
In the early nineties of the last century, US Senators Sam Nunn and Richard Lugar proposed a draft of a new international program. Its goal was to reduce the risks associated with weapons mass destruction (WMD). After the program was adopted by the US authorities, it was designated by the acronym CTR (Cooperative Threat Reduction) and the unofficial name “Nunn-Lugar Program”. By 1993, the program included almost all countries formed on the ruins of the Soviet Union. The CTR program involved the United States assisting in the destruction of weapons of mass destruction remaining in the former Soviet republics. The purpose of the events was officially called the need to minimize the risks associated with the existence of nuclear, chemical and biological weapons in countries with unstable political, economic and social conditions. 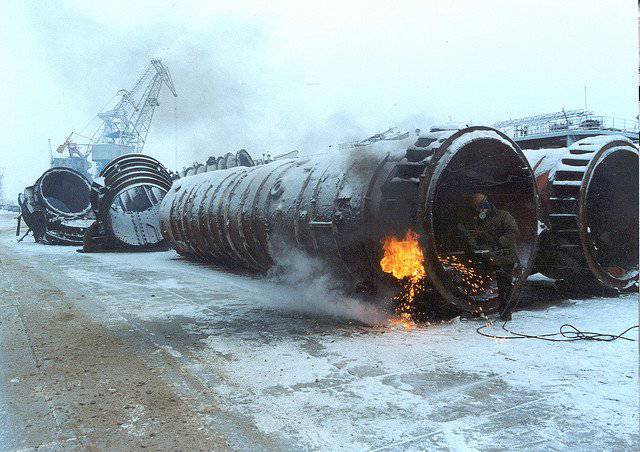 It was planned to achieve the main goal in four ways: the destruction of weapons of mass destruction itself, the collection of all information regarding its presence and quantity, increasing the transparency of the relevant part of the armed forces of countries in the post-Soviet space, as well as cooperation to protect existing stocks of weapons of mass destruction from third parties. In addition, the CTR program was composed of several additional programs that provided certain nuances of the implementation of the plan. Over the past two decades since the program began, the CIS countries, with the help of the United States, have removed from the watch and destroyed huge quantities of weapons:
- more than 7500 nuclear warheads;
- over 700 air-to-surface missiles with the possibility of carrying a nuclear warhead;
- about 540 intercontinental ground-based ballistic missiles;
- almost 500 ballistic missiles for submarines;
- about 450 rocket mines;
- 128 bombers with the possibility of carrying nuclear weapons;
- 27 atomic submarines;
- 11 mobile ground launchers for intercontinental missiles.

Also, the results of the implementation of the CTR program are a large amount of uranium, made unsuitable for use in nuclear weapons, and a change in the specialization of a number of research organizations previously engaged in the study and creation of weapons of mass destruction. In addition, it is through the “Nunn-Lugar Program” that Belarus, Kazakhstan, and Ukraine obtained a non-nuclear status. As for Russia, in its case, the CTR program had a strong impact on the number of nuclear weapons and their means of delivery, but everything ended only with a reduction in arsenals and a number of reorganizations. The agreement between the United States and Russia regarding the joint holding of CTR events was twice extended after signing - in 1999 and 2006. The next renewal of the agreement should take place in the next 2013 year.

However, recently it became known that Russia is very likely to refuse to further participate in the Nunn-Lugar Program. It is known that the United States intends to extend the contract and continue the further implementation of the points of the project, for which several months have been unsuccessfully negotiating. Doubts about the possibility of extension appeared in connection with the publication of the Kommersant publication. Citing a source in the US State Department, it reports that the Russian side does not want to continue working together to destroy weapons of mass destruction. The source cited the main thesis of Moscow representatives: twenty years have passed since the first signing of the agreement on Russia's participation in the CTR, and the situation in the country has changed in a positive direction. Therefore, henceforth, our country does not need any outside assistance with regard to the reduction of nuclear potential and the destruction of chemical and biological weapons. It is worth recalling that during the joint work on the Nunn-Lugar Program, the United States invested more than eight billion dollars in Russian disarmament. By the standards of the US budget, not such a big number. Nevertheless, the possible cessation of the increase in total CTR costs caused some concern to the American leadership.

In addition to a source in the US State Department, Kommersant journalists interviewed some representatives of the Pentagon and the Russian Ministry of Foreign Affairs. According to the first, Russia expressed concerns that too many information about its nuclear forces would fall into the hands of Americans using the CTR program. The source-diplomat, in turn, called the reason for delaying the negotiations and the possible refusal to extend the agreement another fact: the relevant agreements were signed in a very difficult period of our storieswhen foreign countries, taking advantage of the difficult situation in Russia, could receive substantial benefits in exchange for small concessions. The agreement on participation in the CTR program was one of such agreements, which were not at all profitable for Russia. Now we can refuse uncomfortable obligations.

Naturally, the relevant statements of the interested parties immediately followed. The same anonymous representative of the US Department of Defense considered it necessary to warn that after the closure of the joint program, the situation with the storage of the Russian WMD could worsen. In addition, in his opinion, the lack of US participation threatens to provoke the leakage of radioactive, chemical and biological materials outside Russia. Another unnamed source allegedly from the Russian Ministry of Defense, quoted by Kommersant, believes that a speedy exit from the CTR program threatens the military department with financial problems. According to him, in the state program of rearmament before the 2020 of the year, no funding is provided for those areas that were previously paid by the Americans. Accordingly, it is necessary to seek out the possibility of maintaining the current situation. A review of the opinions of anonymous Kommersant sources should be finished in the words of the same representative of the Russian Foreign Ministry. He argues that Russia is not against the continuation of cooperation, but now the terms of the contract should be beneficial to both parties, not just the United States.

If anonymous sources of the Kommersant publication are really related to those organizations to which they are “assigned” and really have enough information, then a very, very interesting situation arises around the CTR program. Russia's unwillingness to renew the agreement is completely understandable: the terms of the agreement transparently hint that it has some more unwritten goals. The first of these is the collection by the United States of data on the nuclear forces of a former (whether? Ex) potential adversary. The "precocity" of the program also leads to certain thoughts. Recall that work on the creation of the CTR program began in the middle of 1991, and less than a year later the United States signed the first agreements with the former Soviet republics. The second hidden objective of the CTR, most likely, concerns the elimination of nuclear weapons abroad and, as a consequence, the reduction of threats and the number of "competitors" in the field of atomic weapons. The success of the Nunn-Lugar Program in Belarus, Kazakhstan and Ukraine speaks in favor of this assumption. Through the efforts of the Americans, these countries abandoned nuclear weapons and completely utilized them, after which the list of nuclear powers was reduced by three points.

Perhaps the tacit "maximum program" of all CTR activities was to promote Russia's complete abandonment of nuclear weapons. As we see, if such plans were, they were not realized, and all the actual results of the program are similar to the officially announced ones. The volume of Russian nuclear arsenals has decreased, chemical and biological weapons have been almost completely destroyed, and almost all of the relevant objects, which have received American attention, have changed their appearance and / or improved their protection. In fact, it turns out that the Russian military, if I may say so, exchanged part of the nuclear weapons (there is every reason to believe that these were outdated samples) for a small modernization of the related infrastructure.

Meanwhile, US officials confirm their country's desire to extend the agreement on the CTR program. So, in August of this year, one of the authors of the project, R. Lugar, came to Russia. The purpose of the visit was negotiations on the further continuation of joint work. This time the agreement was planned to be extended not by seven years, as before, but by four. The exact results of the August talks are unknown, but there is reason to assume their unsuccessful completion. At present, Washington’s position is as follows: “The Nunn-Lugar program” is an important element of international relations and its termination will necessarily entail a number of unpleasant consequences. At the same time, US officials, in particular, US Ambassador to Russia M. McFaul, do not object to revising the terms of the agreement. It seems that the United States wants to leave a convenient military-political tool, and at the same time maintain an additional channel for obtaining information about the state of the nuclear forces of the former potential adversary and current partner in the "reset", even at the price of certain concessions.