"People's Armament" in the Patriotic War 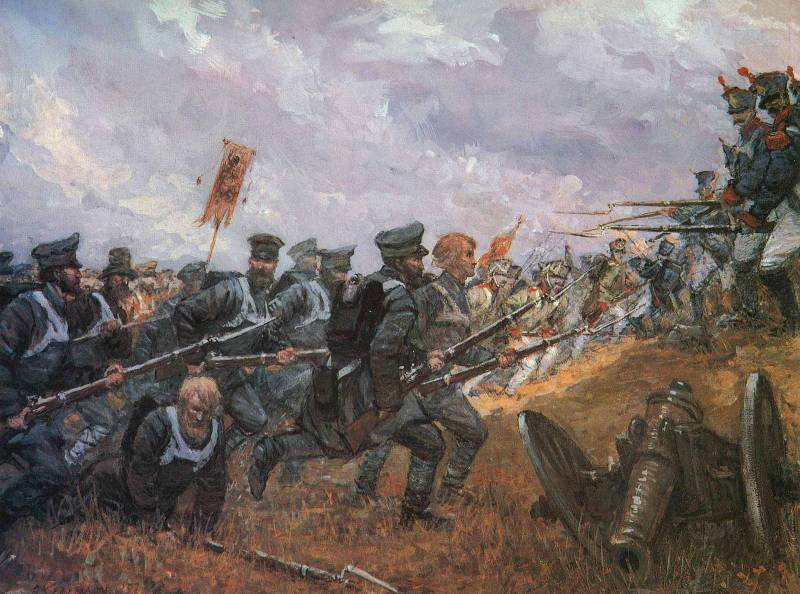 Call to the people

The manifesto of Emperor Alexander I on the defense of the Fatherland and the creation of a people's militia became the first official document that informed the people of Russia about the French attack and the beginning of the war. The text was prepared by State Secretary Admiral A.S. Shishkov and signed by Alexander Pavlovich on July 6, 1812 in the camp of the 1st Western Army near Polotsk. On July 10, the manifesto was printed in the printing house of the Governing Senate in St. Petersburg.

Addressing his subjects, the tsar expressed confidence in the final victory and “firm hope for our brave army” and announced that he considered “to gather new forces within the state that ... would constitute a second fence to reinforce the first and to protect houses, wives and the children of each and all." The document contained an appeal "to all estates and states of the spiritual and worldly ... by unanimous and general uprising to assist against all enemy plans and attempts."

Alexander assigned the duty to form a militia to the nobles, who were instructed to "bring together the people they supply to protect the fatherland, choosing from among themselves the chief of these." In the manifesto there was an appeal to the inhabitants of the "Eternal Throne of our Moscow" with a call to act as the initiators of this "people's armament".

Immediately after the publication of the manifesto, extraordinary meetings of the nobility were held in the provinces, at which the number and composition of the provincial militias were determined, and the heads and commanders of units were elected.

On July 18 (30), 1821, the Manifesto “On the Formation of a Temporary Internal Militia” was issued, which limited the widespread convocation of zemstvo militias to 16 central provinces that adjoined the military theater. The first district (Moscow, Tver, Yaroslavl, Vladimir, Ryazan, Tula, Kaluga, Smolensk provinces) was supposed to cover Moscow. The second district (Petersburg and Novgorod provinces) ensured the "security" of the capital. The third Volga district (Kazan, Nizhny Novgorod, Penza, Kostroma, Simbirsk and Vyatka provinces) served as a reserve. The rest of the provinces were ordered to remain “inactive” until there was a need for this. 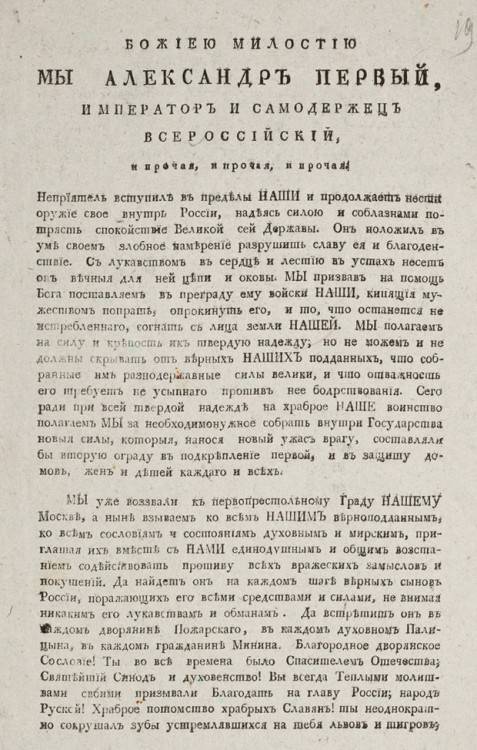 Manifesto of Emperor Alexander I on the collection of Zemstvo militia within the state. July 6 (18), 1812

Formation of the second "fence" (army)

The general leadership of the formation of the militias was carried out by the Special Committee under the sovereign, which included General of Artillery A. A. Arakcheev, Minister of Police, Lieutenant General A. D. Balashov and Secretary of State Vice Admiral A. S. Shishkov. The emperor himself appointed the heads of the three districts: the Moscow district - the Moscow military governor-general, infantry general F. V. Rostopchin; Petersburg District - General of Infantry M. I. Kutuzov (Golenishchev-Kutuzov), from August 27 - Lieutenant General P. I. Meller-Zakomelsky; Volga District - Lieutenant General P. A. Tolstoy.

The rest of the leadership of the militias was elected by the local nobility and submitted to the highest approval. Retired officers entered the zemstvo army with the same rank, and civil officials lost one of their class ranks according to the Table of Ranks. Nobles from retired non-commissioned officers were appointed to the positions of conscripts (non-commissioned officers). The militias were to be disbanded "upon the expulsion of the enemy from our land."

Each landowner had to submit to the militia a certain number of equipped and armed warriors from his serfs within the prescribed time frame. The selection of warriors was carried out by the nobles or peasant communities by lot. Warriors of the provincial militias united in regiments of horse and foot Cossacks (under the Cossacks meant lightly armed horse or foot soldiers), as well as foot rangers. Foot regiments were divided into battalions, battalions - into hundreds and tens. Mounted regiments - hundreds, hundreds - dozens. In the Smolensk region, the district militias, led by thousands of chiefs, were divided into "five hundred", hundreds and fifty.

The Ministry of War assisted in the training of warriors, their weapons, allocating it from their arsenals. The military training of warriors took place according to an abbreviated recruit training program. The militia was trained by officers and lower ranks from the army and Cossack units. The militias experienced a shortage of firearms weapons, ammunition and equipment, since the main stocks went to the active army and to the formation of reserve regular units. Therefore, most of the militias, except for the Petersburg one, were armed mainly with edged weapons - pikes, horns and axes. By December 1812, 49 thousand guns were handed over to warriors from military arsenals and factories.

In the provinces, supplies were collected for the militia for a period of three months. In the future, the warriors were to be provided by the state. Commanders and officers were not supposed to be paid, they served "out of zeal for the Fatherland." But poor nobles were entitled to an allowance for equipment. The uniforms of the militias consisted of a cloth caftan, bloomers, a shirt, boots and a cap with a brass cross and the inscription "For Faith and the Tsar" on it.

The Ministry of Finance controlled the storage and distribution of funds raised for the militia. On July 25 (August 6), 1812, Emperor Alexander approved the report of the Synod, according to which the Russian Church allocated 1,5 million rubles for the organization of the St. Petersburg and Moscow militias. All "laity" and clergy were called to donations.

The bulk of donations to the militia came not from individuals, but from estates and social groups. Funding was mandatory. The nobility, merchants, philistines, artisans, peasant societies at their meetings determined the total amount of the collection and made its layout among the members of their class, depending on their condition. 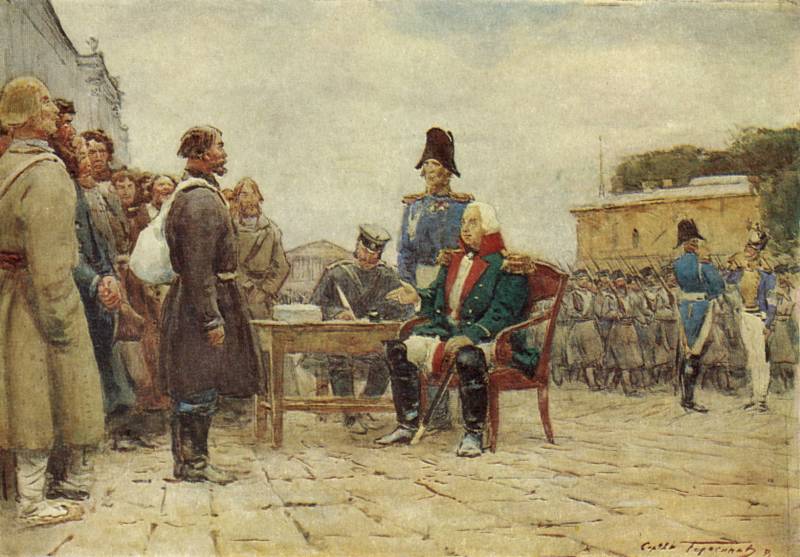 The extraordinary circumstances associated with the withdrawal of the army to Moscow forced the tsarist government to give a wider scope to the formation of the "people's" army. In addition to the Zemstvo militias, Cossacks appear. In the Little Russian provinces, 22 Cossack regiments and two zemstvo militias (Poltava and Chernigov) with a total number of more than 70 thousand people were formed. Bug Cossacks (Kherson province) equipped a squad of 500 soldiers. The Don Cossacks formed 22 regiments numbering over 12 thousand people. They were joined by 4 regiments of "serving Cossacks".

On the territory of the Orenburg governorate, 24 regiments with a total number of 13 thousand people were assembled from the Bashkir-Meshcheryak irregular army, the Orenburg and Ural Cossack troops. In Livonia, a "mounted police" was formed - 2 thousand people. It was then reorganized into a Cossack regiment with a staff of 800 people. From the coachmen of the tract Petersburg - Moscow, they created the Tver-Yamskaya Cossack regiment of about 800 people.

Also, on the initiative of the nobles, temporary units were formed - regiments, squadrons and detachments. So, at their own expense in the Moscow militia, the 1st Jaeger Privy Councilor N. N. Demidov and the 1st Foot Real Chamberlain Prince P. P. Gagarin regiments gathered; in the Kherson province - a squadron of the landowner V.P. Skarzhinsky. In the Smolensk province, the family of retired Major General D. E. Leslie formed from their yard and serfs "a hundred horsemen of the Leslie brothers of the Smolensk militia."

In addition, in St. Petersburg, Moscow and the Baltic states, "volunteer" regiments and detachments were formed, where people were recruited "from the persons of the free state" - nobles, officials, philistines, merchants and young students. In the capital, the 1st St. Petersburg Volunteer Cossack Regiment was recruited under the command of the retired Lieutenant Count F. M. de Olivera (Oliveira), and then Colonel A. A. Yakhontov, and the 2nd St. Petersburg Volunteer Cossack Regiment "Alexandria" of the retired staff captain Baron K. K. von Bode. In Moscow, the Moscow Cossack regiments of Counts M.A. Dmitriev-Mamonov and P.I. Saltykov were formed; in the Baltic States - the "Courland Corps of Free Mounted and Foot Rangers" and the "Volunteer Cossack Hundred". 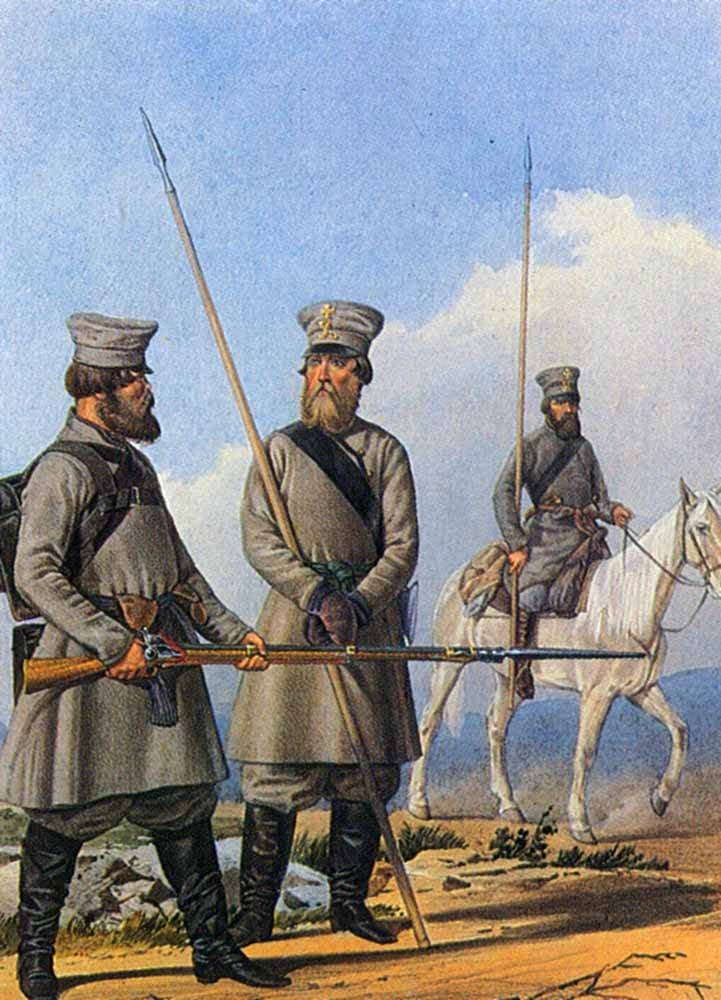 Huntsman, foot and horse Cossacks of the Tver militia. Colorized lithograph by P. Ferlund 2nd after a drawing by P. Gubarev. Mid XNUMXth century
Also, in addition to the zemstvo militias in counties, cities, villages that adjoined the military theater, they formed "cordons" or "militia guards". They were created by local authorities, the nobility, urban and peasant communities for the purpose of self-defense and maintaining order. So, in Kyiv, a cavalry regiment of about 1 thousand people guarded the order. In Riga, 8 companies were formed from the townspeople.

In total, in 1812 there were more than 300 thousand people in the militia. It was a real second army, reinforcing the first - regular.

Smolensk warriors fought near Krasnoe and for Smolensk. In the Battle of Borodino, which became decisive in the war, about 28 thousand warriors of the Smolensk and Moscow militias participated. The militias were a reserve for parts of the army in the field. In particular, the Cossack militia regiments significantly strengthened the light cavalry of the army and played a large role in the "small war" and the pursuit of the French army.

Tver, Yaroslavl, Vladimir, Ryazan and other warriors defended their provinces from enemy foragers and marauders and attacked French communications. The militias blocked the road to St. Petersburg and Bryansk with its military enterprises. The militias helped the corps of General P. Kh. Wittgenstein to liberate Polotsk, pursued the retreating troops of the Great Army. The warriors also served in the rear garrisons and the convoy, guarded communications and prisoners, looked after the sick and wounded, etc.

After the end of hostilities on the territory of Russia, all zemstvo militias, except for Vladimir, Tver and Smolensk, participated in the foreign campaigns of the Russian army in 1813-1814. In the spring of 1813, the Moscow and Smolensk militias were disbanded, and by the end of 1814, all other militias.

In this regard, the current government of the Russian Federation, in the context of the rapidly approaching collision with the NATO bloc, should learn from the authorities of the Russian Empire, which found themselves in similar conditions (the war with the “European Union” named after Napoleon). It's time to remember the experience of the ancestors - "Get up, the country is huge"! 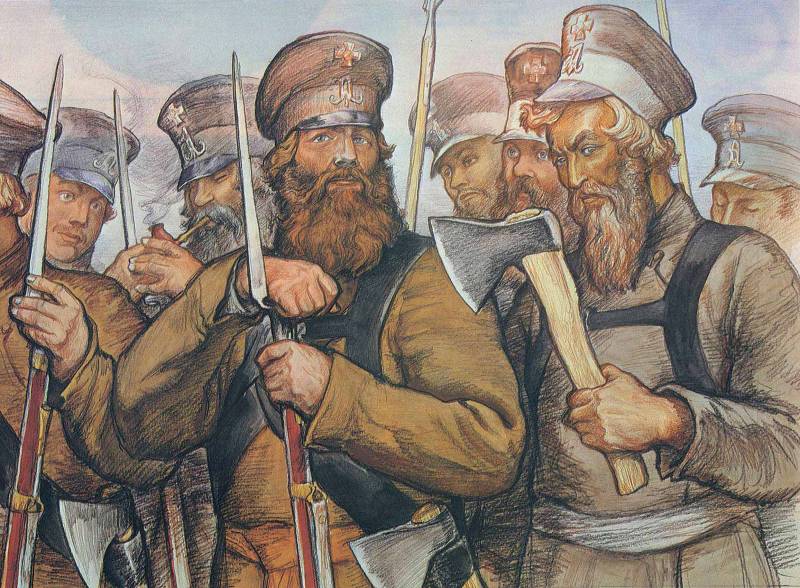