Fernando de Toledo Alba. Autumn of the life of the "Iron Duke" 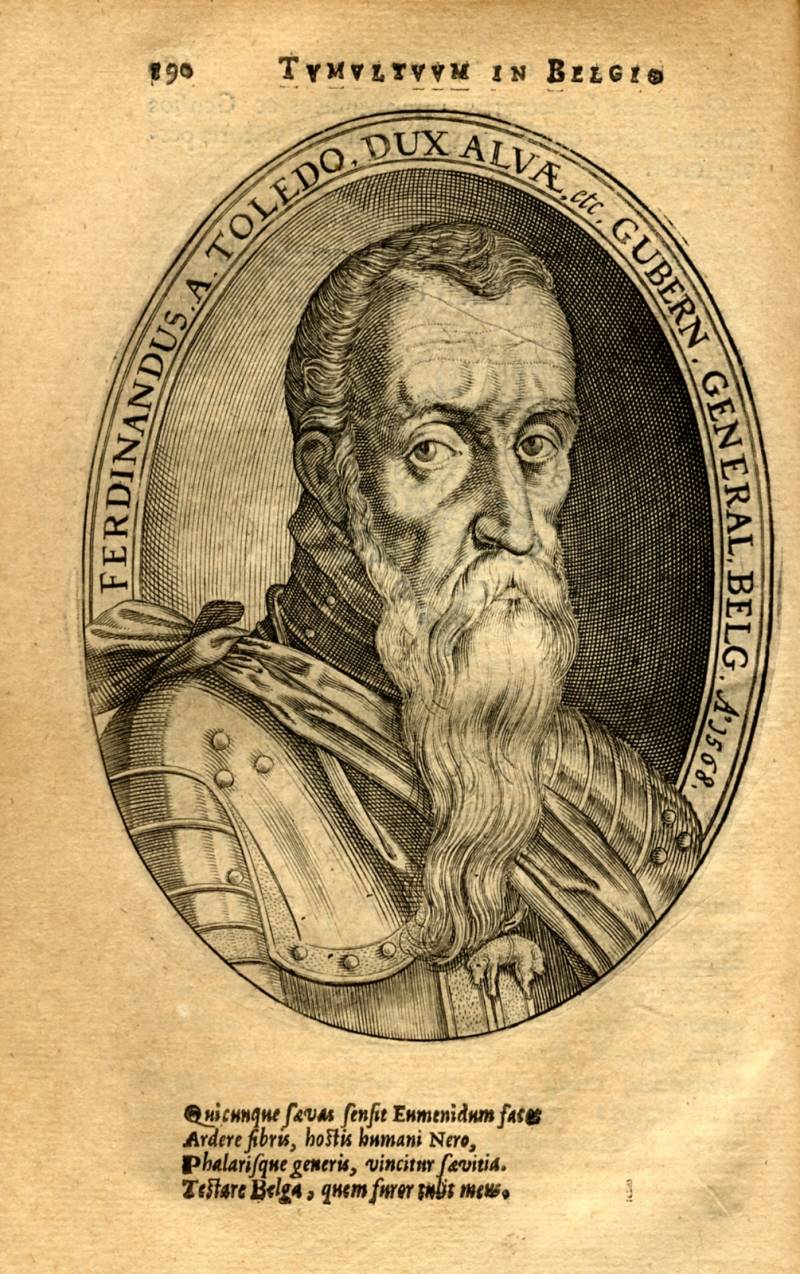 Today we will continue and finish the story of the "Iron Duke" Alba (first и second articles in this series). Let's talk about the alcabal, the bloody war in the Netherlands, the disgrace and the last triumph in Portugal.

Alcabala: the fateful decision of the Duke of Alba

The maintenance of the army was very expensive, and therefore the Duke of Alba decided to impose new taxes on the population of the Netherlands. He took the alkabala as a model - a tax once levied by the Arabs in the Korodovsky caliphate and then also applied by the Spanish kings. It consisted of three parts, called "tenth pfennig", "twentieth pfennig" and "hundredth pfennig". "The tenth pfennig" (that is, 10%) was levied on every sale and purchase transaction. "Twentieth" (5%) - from transactions for the sale of real estate. "Hundredth" is the recovery of 1% of the value of any property. However, Alba did not take into account local specifics. It was the "tenth pfennig" that turned out to be especially terrible for the inhabitants of the Netherlands. The fact is that mediation was widespread in this province, and on the way from the producer to the consumer, goods sometimes passed through seven hands. Thus, in fact, this tax was not 10, but up to 70% of the cost of each product.

Bloody war in the Netherlands

It was the introduction of the alcabala that became the fatal mistake of the Duke of Alba, which alienated even loyal residents of the Netherlands from him. Some cities, including Utrecht, openly refused to pay "tithe". An uprising began, which quickly spread throughout the province. The rebels were assisted by the English Queen Elizabeth, who opened her ports for the ships of the "sea geezes", the French Huguenots and the Protestants of the German principalities.

In June 1568, the Provincial States of Holland proclaimed William of Orange stadtholder of Holland, Zeeland, West Frisia and Utrecht and provided him with 100 guilders to form an army. The Duke of Alba moved his troops north.

I must say that the discipline in the army of Alba was "iron", any "amateur" was severely suppressed, and there were no unauthorized robberies of the civilian population or captured cities. But there were repressions sanctioned by him, because of which Alba received the nickname "executioner of the Netherlands." The duke immediately warned that the inhabitants of the cities to which his army approached could count on mercy only on the condition of immediate surrender. Otherwise, the cities were given to the soldiers for plunder. 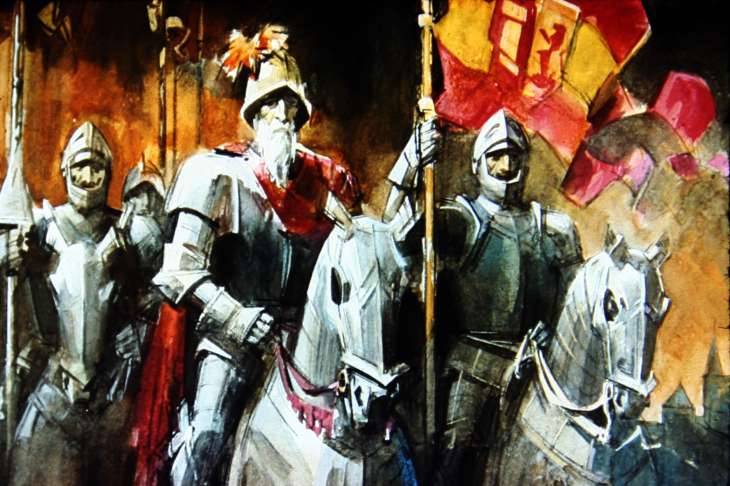 "Bloody Duke" Alba in an illustration for Charles de Coster's novel "The Legend of Ulenspiegel"
It should be noted that the Dutch in a number of cases were not opposed to “playing” according to such rules. The cities loyal to Philip II were ruined and plundered, and if the Spaniards simply executed the recalcitrant, then their opponents liked to torture the prisoners first or give them to be torn to pieces by a drunken crowd. With particular pleasure, "virtuous Protestants" mocked Catholic priests and monks. Once the Spaniards threw the head of a Dutch officer over the city wall, the Dutch immediately sent them seven Spanish heads.

Both sides shamelessly violated all the laws of war. The Duke of Alba was reluctant to take enemy soldiers prisoner, the Dutch killed the Spanish soldiers who surrendered, after promising to set them free. Both of them often killed parliamentarians, moreover, sometimes enemy commanders were specially called in to negotiate - only so that false parliamentarians could kill them. William of Orange did not hesitate to ask for help from the Ottoman Sultan Suleiman the Magnificent, and the words became the slogan of the gozes: “Better Turks than the Pope". This motto can be seen on the medallion of sea geuzes below: 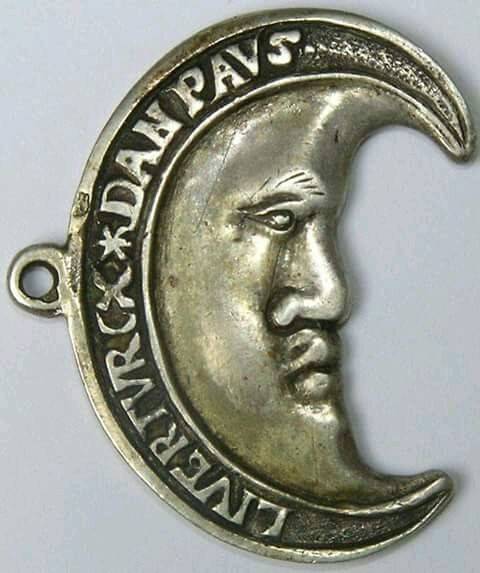 And the banner of sea gozes - a red flag with a crescent moon, suspiciously resembled a Turkish one.

Sultan Suleiman, in a response letter, stated that he was religiously close to the Protestants - “since they do not worship idols, they believe in one God and fight against the pope and the emperor", and promised help at the first request. One can imagine how the Christians of the countries of Southern Europe reacted to this union, whom the Ottoman admirals and Maghreb pirates took thousands of prisoners and, like cattle, sold in the slave markets.

But the "iron duke" Alba steadily pushed back the rebels and captured their cities. In 1571, the following medal was minted in his honor: 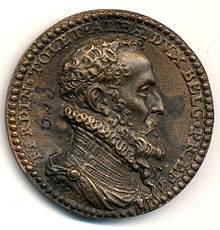 On the back of it are the words:God and the king are the goals of life».

By 1572, the rebels were in a desperate situation, and it seemed that their final defeat was a matter of the near future. In that year, Elizabeth was forced to make concessions to the Spaniards and close the English harbors to the Gueuses. But she continued to subsidize them. The rebels were helped by chance. In the spring of 1572, the wind drove the Gueuze ships of Admiral Willem de la Marck to the mouth of the Meuse, where the peaceful city of Brielle is located, in which there were no Spanish troops. 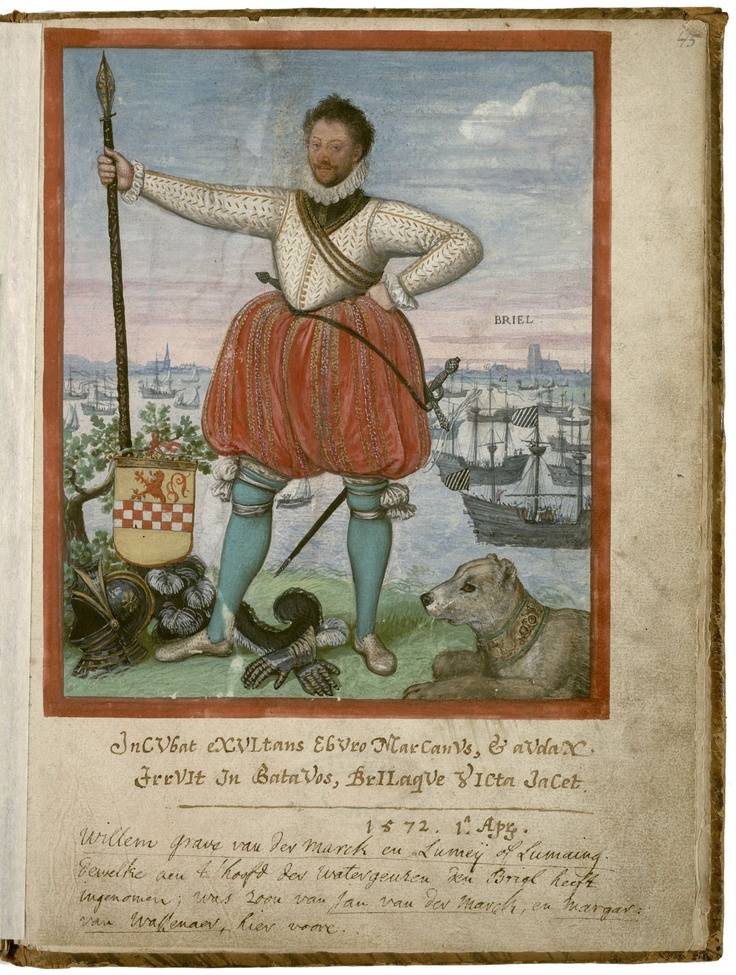 Lumey van der Marck, admiraal van de watergeuzen, 1572
On April 1, the Gyoza not only captured this city, but remained in it, making it their base. 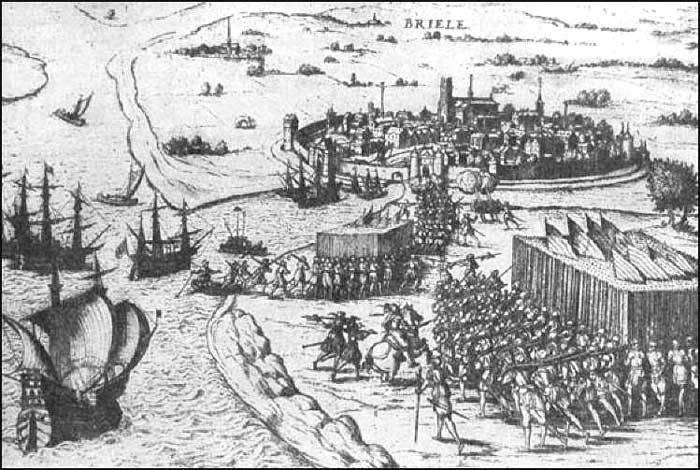 The capture of Brielle by "sea geezes" in 1572. Engraving from 1583
Upon learning of what had happened, the city of Vlissingen rebelled, and then an uprising began in Holland and Friesland. Amsterdam and Middelburg remained loyal to the crown. The methods of the rebels can be judged by their actions in Haarlem. In June 1572, the city was visited by the envoy of William of Orange, who failed to convince the inhabitants to join the rebels. And on July 4, the Gyozes came and announced that they would burn Haarlem if its inhabitants did not support the rebellious prince. All citizens, including women and children, were forcibly forced to participate in the work to strengthen the city walls.

The bitterness of the parties reached the limit. The newly occupied Mechelen Alba gave his soldiers for plunder for three days, so that they would “refresh a little”. Valenciennes, Zutphen and Naarden (which suffered especially) were ravaged, but Mons, who surrendered in time, was spared. 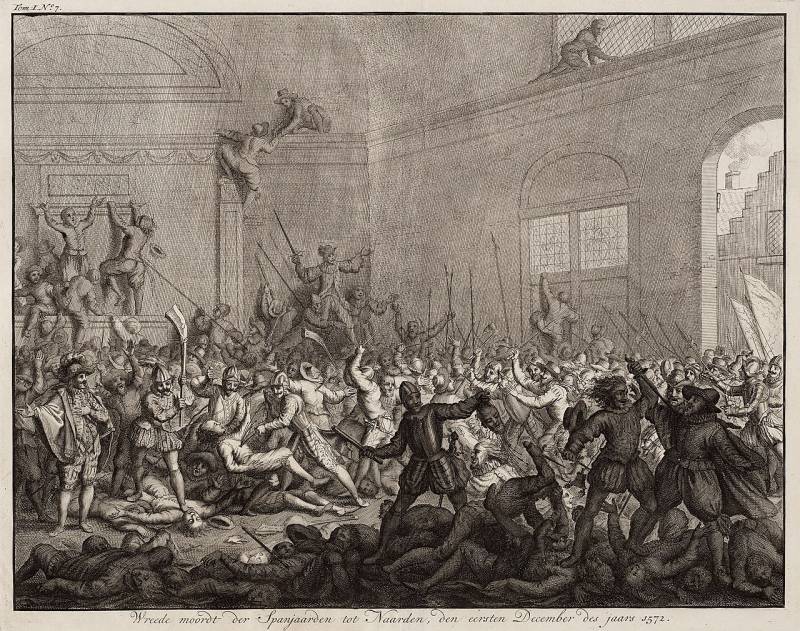 Massacre at Naarden engraved by Jan Luyken
At the beginning of 1573, the Duke of Alba moved to the northern provinces - Holland, Zeeland, Friesland and Utrecht, whose governor-general was proclaimed William of Orange, who converted to Calvinism (the Calvinists were the most determined opponents of the Catholics). Haarlem capitulated after 7 months of siege - in July 1573. Alba, in exchange for an indemnity, forbade the ruin of this city, but almost all the soldiers of the garrison were executed. 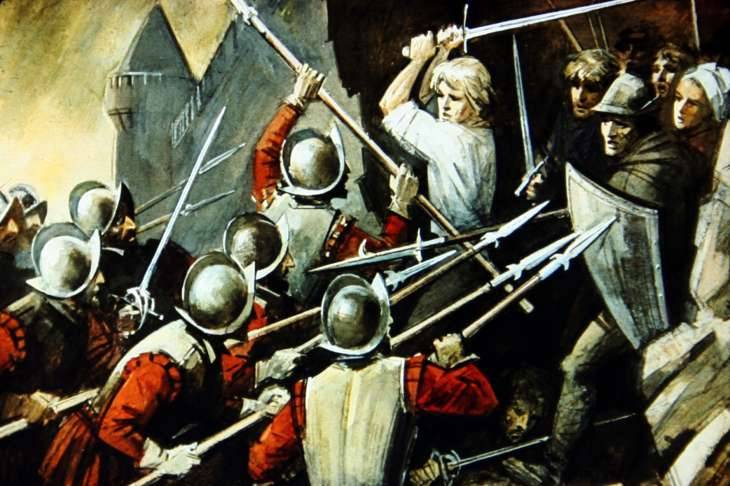 An episode of the siege of Haarlem in an illustration for Charles de Coster's novel The Legend of Ulenspiegel
But the Spaniards failed to capture Alkmaar. The siege of Leiden, led by Francisco de Valdes, was also unsuccessful: in October 1573, after the defeat of the Spanish fleet in the Zuiderzee, his troops had to withdraw (this city was never taken by the Spaniards). In addition, the situation in the Mediterranean aggravated, where Venice was forced to cede Cyprus to the Ottomans (and the following year Turkey annexed Tunisia to its possessions). Philip II had no money to continue the war in the Netherlands, and he tried to change the situation by recalling the Duke of Alba and appointing instead Luis de Requezens, who abolished the "Council of Mutiny" and the Alcabala the following year. This did not stop the war in the Netherlands, and in 1576 an incident occurred in Antwerp, which was included in history titled "Spanish Fury". About 5 thousand Spanish soldiers, who were not paid for two years, robbed the city for three days - more than 600 houses were burned, up to 8 thousand inhabitants died. The news of this led to a new aggravation of the situation in the Netherlands. 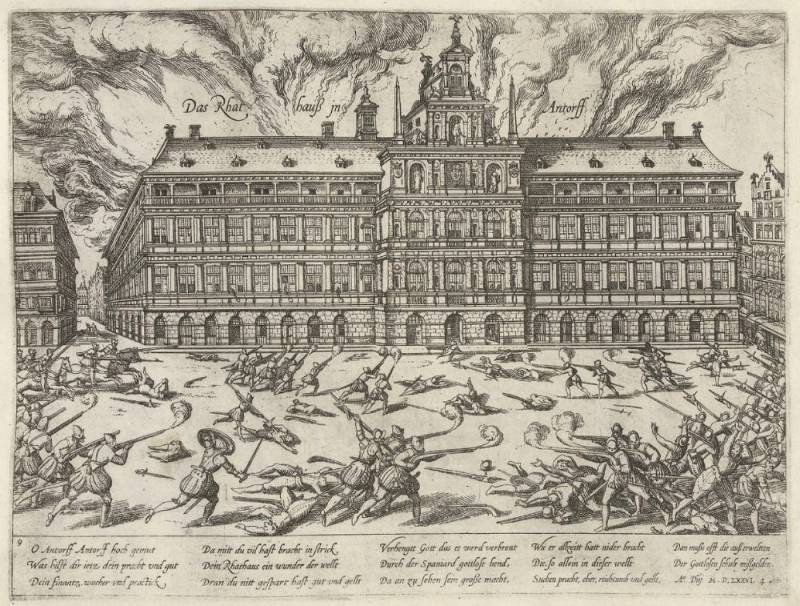 "Spanish Fury" in Antwerp on an engraving by Frans Hogenberg
The illegitimate son of Charles V, Juan of Austria, who commanded the Christian fleet at the Battle of Lepanto, and Don Juan's nephew, Alessandro Farnese, who also fought at Lepanto, also visited the Spanish governors in the Netherlands. But that's another story.

Opal of the Duke of Alba

he then said bitterly.

In 1578, Philip II ordered a review of the court case against the duke's son and heir, Fadrique, who violated the promise given to Magdalena de Guzman (this was described in first article). It turned out that Fadrika was assisted by his father, who gave him permission for a secret marriage with Maria, the daughter of Grand Garcia Alvarez de Toledo and Osorio, 4th Marquis of Vilafranca del Bierzo. Fadrique was again arrested, and the Duke of Alba and two of his secretaries (Fernando de Albornoz and Esteban Ibarra) were sent into exile in the city of Useda.

The last victory of the "iron duke" 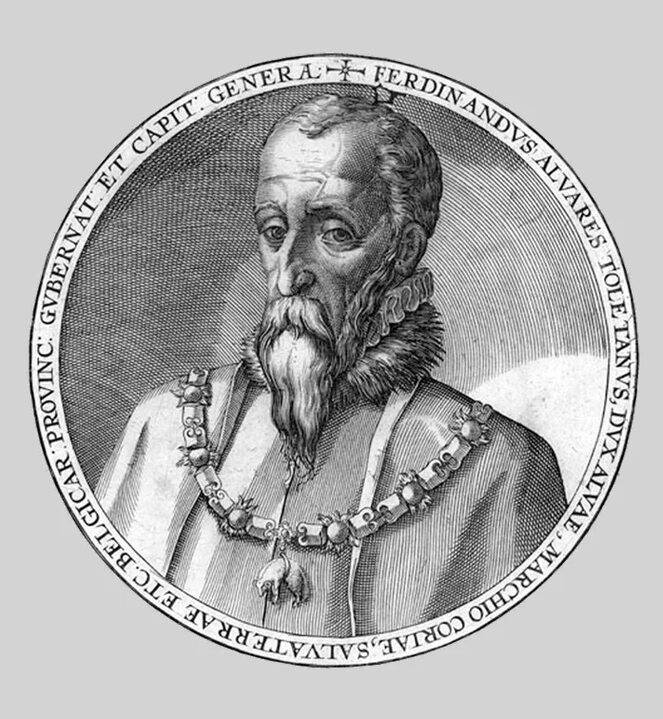 Alba's disgrace ended in 1580, when, on the advice of Cardinal Granvela, Philip II put him at the head of an army heading for Portugal. The fact is that the childless king of this country, Sebastian I, died on August 4, 1578 in the battle of El Ksar el Kebir. Here, at the confluence of the rivers Lukkos and al-Mahazin, a 20-strong army, which, in addition to the Portuguese, included Spaniards, Germans, Italians and Moroccans, met in battle with a 50-strong Moroccan army (it also included the Janissary corps). This battle is known as the "Battle of the Three Kings": the Portuguese and two Moroccan ones - the former (Mohammed al-Mutawakkil, who turned to the Portuguese for help) and the ruling one. They all died then. At first, the Portuguese army pressed the opponents, but after hitting the flanks, it fled, and many soldiers, including King Sebastian and Mohammed al-Mutawakkil, drowned. And the ruling Sultan of Morocco, Abd al-Malik, died of some kind of illness before the battle began. His brother, Ahmad al-Mansur ("Winner"), was proclaimed the new ruler of the country. Since he received a huge ransom for the captured noble Portuguese, he had another nickname in Morocco - “al-Dhahabi” (“Golden”). 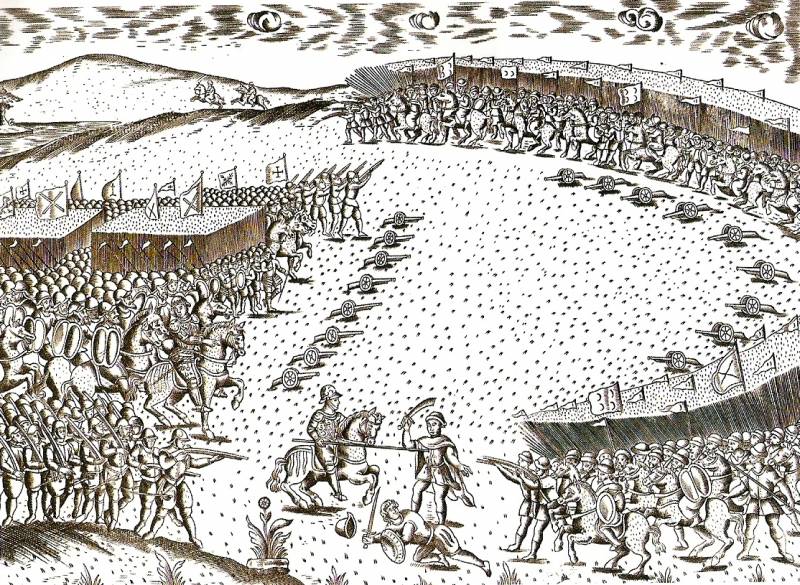 Battle of El-Ksar-el-Kebir on an early XNUMXth-century engraving
The deceased King Sebastian was succeeded by his cousin, Cardinal Henry. But he, for obvious reasons, did not have children. The empty throne was claimed by Antonio, the prior of the Knights of Malta in Crato - the illegitimate son of the Infante Luis and the grandson of the Portuguese king Manuel I (years of life - 1469-1521). 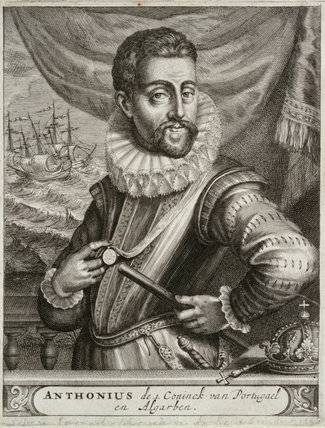 Anthony I of Portugal
He was proclaimed King of Portugal in June 1580. The Spanish king Philip II, the son of the Portuguese princess Isabella and also the grandson of Manuel I, did not agree with his claims to the throne (at the same time, he was legitimate).

The Duke of Alba, who was already 73 years old, at the head of an army of 20, moved to Lisbon. On August 25, 1580, he defeated the Portuguese army in the battle of Alcantara, and on August 27, he entered the capital of this country. Here is what the united possessions of Spain and Portugal are now:

Philip II appointed the Duke Viceroy of Portugal. After this triumph, Fernando Alvarez de Toledo, Duke of Alba, lived for a little more than two years. On December 11, 1582, he died in Lisbon at the age of 75.