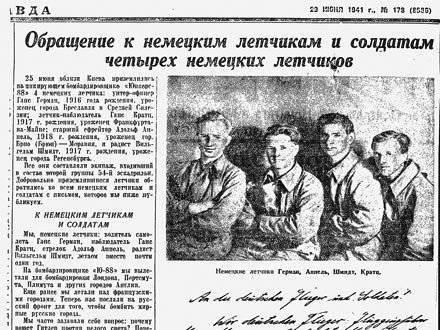 Time passes, years, decades - the war remained in the memory of those who fought, who passed its roads. Will remain in our memory. By and large, any war, big or small, is a deliberate choice between the murderer and those who oppose him.

The Great Patriotic War - there are still many events, facts, which are very difficult to assess.

Starting a war against the Soviet Union, the leadership of Hitler Germany understood that not everyone shared convictions and ideologies and not the entire population supported the campaign to the east. Today, it is known about the defectors from the Germans on the eve of the war with warnings of impending disaster ... And what about those who went over to the side of the Soviet Union during the fighting? And at the beginning of the war? Almost nothing. In the general flow of problems that have fallen onto the country, the fact of voluntary surrender is an episode fading amid thousands of deaths ... We must pay tribute, before 1943, cases of voluntary surrender are rare ... And yet they did occur.

Pravda from 29 June 1941 of the year published an open letter to four German pilots who flew over to the side of the Soviet army on June 25.

To the German pilots and soldiers

We, the German pilots: the driver of the aircraft Hans Hermann, the observer Hans Kratz, the shooter Adolph Appel, the radio operator Wilhelm Schmidt, we fly together for almost a year.

On the Yu-88 bomber we flew out to bomb London, Portsmouth, Plymouth and other cities in England.

Earlier we flew over the French cities. Now we were sent to the Russian front in order to bomb the peaceful Russian cities.
We often asked ourselves the question: why is Hitler fighting against the whole world? Why does he bring death and ruin to all the nations of Europe? Why should the best people of Germany die from the bullets that are sent to meet the peoples defending their homeland?

No one answered us this question. Every time we saw that the war provoked by Hitler brings all the peoples of Europe, including the German people, only misfortune and death.

We were often disturbed by the idea that many innocent women and children were killed by our bombs because of Hitler’s bloody dog.
Therefore, this time we dropped bombs in such a way that they did no harm. We have long concealed the idea of ​​fleeing from Hitler and starting a peaceful life, but we were afraid.

Now that Hitler has declared war on Russia, in which he will surely lose his head, we decided to take an escape.
25 June, our group, led by Major Kraft, flew to Kiev.

We dropped our bombs in the Dnieper and landed near the city.

We were amazed when armed peasants immediately surrounded us, who immediately captured us.
This once again convinced us that the Soviet people are one, prepared to fight and win.

Now we are in Russia. Here we were well received.

On the fourth day after the start of the war, dropping bombs in the Dnieper, they landed near Kiev. One thing - an emergency landing, and here the crew diving in full force.

By the beginning of the war in Germany, there was a well-established system of control over its citizens and their moods. In the military environment is quite tough. After the defeat near Moscow, the system will acquire a total character.

The crew of the bomber - four people with different characters ... When the thought of the transition originated and who shared this thought with the crewmate is unknown. You had to be sure that he would not be betrayed. Each of them was aware of the fact that they voluntarily put all their relatives to the hardest trials by the fact of voluntary surrender. First of all - fathers and mothers, brothers and sisters. Most likely they condemned them to death ...

The war has its own logic. The mechanism of control and psychological pressure in Germany, and in sophisticated forms, was worked out to the smallest detail.

Judging by the content of the letter to the pilots, the decision has been brewing for more than one day. It was necessary to choose a moment so that after the bombing there was an opportunity to land. On the airfield. It was impossible to exclude that they could be shot down by their own or others. In war as in war.

The very text of the published letter senses and guesses the will of the workers of the political propaganda apparatus of the Red Army. They did not miss the chance. By his action, the crew of the diving bomber anticipated the collapse of the ideology of fascism. War is always a choice ...