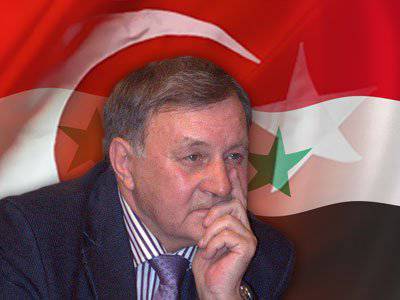 Recently, Turkish Prime Minister Recep Tayyip Erdogan said that "he does not want war with Syria, but military conflict is not excluded." According to him, “those who seek to test the“ containment policy ”pursued by Turkey are making a“ fatal mistake. ”In turn, Turkish Foreign Minister Ahmed Davutoglu noted that“ giving the Turkish parliament to the government a mandate to conduct cross-border operations is not declaring war on Syria, but in the context of a civil war taking place in neighboring Syria, Turkey should be ready for any development of events. "

It is a statement of the fact of the civil war in Syria on the part of Turkey that highlights the main nuance of the emerging difficult situation: Ankara understands that the recent shelling of its territory by Syria could have an unauthorized character from Damascus. According to international experts, in an environment where serious fights are fought between Assad’s army and opposition forces on the border with Turkey, the so-called “crazy shells” cannot be ruled out. And now, judging by the reports of Turkish print and electronic media, the situation in the border areas remains tense. As the BBC Middle East editor Jeremy Bowen writes, "this is not surprising, since the main supply route of the Syrian opposition passes through this zone, and any ill-considered step from any side could lead to an escalation of the conflict." Therefore, the main question arises: "Will Turkey decide to go to war with Syria?"

According to Mark Katz, a professor at George Mason University in Virginia, "Turkey, despite loud statements, is limited in maneuvers in the Syrian direction." First of all, because it is not supported by NATO partners, who are used to forcing others to “carry chestnuts out of fire”, and not vice versa. Moreover, according to Professor Katz, "Washington insists on guarantees of religious and ethnic pluralism in any outcome of the Syrian crisis, and Ankara seeks to strengthen the position of the Syrian Sunnis and to infringe upon the rights of the Syrian Kurds." In turn, many Russian experts are confident that if President Assad is still removed from power, then Syria is likely to fall into enclaves. One of these enclaves will be Kurdistan. In Iraq, as is known, after the overthrow of the regime of Saddam Hussein, the Kurds de facto became an independent state in the north of the country. If the main result of the Syrian crisis is the unification of the Syrian and Turkish Kurds - which cannot be ruled out - and later this alliance will be supported by the Iraqi Kurds, the situation in the Middle East will not qualitatively change Turkey. Therefore, Ankara should objectively be interested in establishing relations with Damascus, and not aggravate the situation. In the meantime, everything happens the other way around.

It is also noteworthy that at the end of August, Russian President Vladimir Putin warned about the danger of such a course of events. “The main thing is that our partners cannot stop,” said the head of Russia. “Already created an atmosphere of chaos in many territories, now the same policy is being continued in other countries, particularly in Syria. We warned that we should act carefully, not impose anything otherwise it will lead to chaos. " Therefore, when Turkey appealed to NATO, the EU and the UN Security Council to determine the position regarding the recent border incident with Syria, it was perceived as a kind of test on its part, revealing the balance of forces on the Syrian springboard. We are talking about the positions of the West, on the one hand, and Russia and China, on the other. NATO, the EU, and the Security Council condemned the shelling of Turkey’s territory by Syria. At the same time, they called on the parties to exercise "maximum restraint", since the armed conflict between the two neighboring countries destabilizes the situation throughout the Middle East. Moscow has also called for restraint Turkey. She recommended Ankara and Damascus to restore bilateral contacts, in order not only to jointly control the situation in the border area, but also to bring political and diplomatic "bridges" with each other.

As the Turkish newspaper Milli gazete writes in this connection, “after the Russian Foreign Ministry announced that the Syrian authorities presented the incident in Akchakala as a tragic incident, it became obvious that one end of the“ Syrian rope ”was in the hands of the Russians. The other is holding the West. And not only he. According to the newspaper Yeni Şafak, "in the Syrian crisis, in addition to the West, Russia and China, Iran, Iraq, Lebanon, Palestine and Israel were directly tied," as well as the global "Muslim-Christian and Sunni-Shiite contradictions." Therefore, a difficult situation arises for Turkey: in spite of its earlier predictions, it turns out to be not only alone with Syria, but also becoming a hostage of great geopolitics. It should be noted that Turkish experts are talking about the impossibility of war between the two neighboring countries. So TRT presenter Ahmet Bahçejiler draws attention to the fact that "Turkey, having good relations with the West and with NATO, is very dependent on Russia and Iran in terms of oil and gas, therefore it is risky for it to make movements only in one of the parties." Nevertheless, there is a great danger that in the future, in preparing the document on the Syrian settlement, Turkey could be excluded from the peace process as “the party involved in the conflict”. Moreover, Turkish diplomacy has not prepared an alternate scenario for resolving the Syrian crisis, especially given the emergence of the Kurdistan state in the region.

Therefore, Moscow offered a way out of this situation. She called on Ankara and Damascus to restore bilateral contacts, in order not only to jointly control the situation in the border area, but also to bring political and diplomatic "bridges" with each other. It is difficult to say whether Turkish politicians will be able to do this, because it is a question of changing the adopted version of the Syrian crisis. Moreover, there is no political consensus on Turkey in this issue. The main opposition Republican People’s Party voted against the government’s proposal in parliament, and according to polls, the Turkish public is also strongly opposed to drawing the country into armed conflict with Syria. Plus, the fact that Turkey due to the crisis in Europe and the "Arab spring" in the region is entering a difficult period of development of its economy: a decline begins. So for Ankara there comes a moment for the most serious decisions.