Assessment scout gets sometimes through half a century 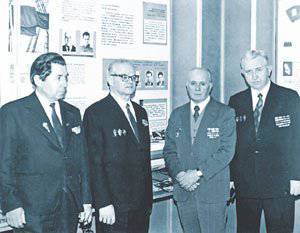 In recent years, many have spoken and written about intelligence and intelligence services. This mysterious profession, associated with risk, and sometimes with self-sacrifice, evokes involuntary respect from all those who consider patriotism, loyalty to the oath, love of country, the natural state of every normal person, and not "the last refuge of scoundrels." Thinking citizens of our country who are interested in the true, not redrawn, once again for the sake of political fashion history Fatherland, scooped up in the exploits of the Soviet, and today - the Russian intelligence officers, moral strength, allowing them to withstand the onslaught of all kinds of tales and tales about the "atrocities of the KGB" readily replicated by individual Russian publications.

About the exploits of the scouts, we learn only after a long period of time, sometimes in tens of years. And this is not by chance: intelligence does not tolerate publicity and only solves problems that cannot be solved by ordinary means. Scouts usually become known to the public only after a failure or as a result of betrayal. And only a very limited circle of employees knows about their daily exploits committed in an atmosphere of complete silence.

The head of the Soviet foreign intelligence service in 1930, Arthur Hristianovich Artuzov, wrote about this in his address to the intelligence officers of the intelligence officers: “Our profession is in the shadow. And not because it is non-potent. Just our work is not advertised. Often our victories and our tears are not visible to the world. But I do not give our profession some exclusivity. I believe that she is among other interesting and difficult professions. Our front is invisible. Covered by secrecy, a certain haze of mystery. But on this front, hidden from hundreds of eyes, there are star moments. And most often the heroism of the Chekist is not in the only feat, but in the everyday hard hard work, in that sublime-significant struggle, which knows neither respite nor relief, in which he gives everything that he has. ”

In the proposed essay, we will try to lift the veil over some episodes of foreign intelligence activity, to tell about some of its employees who were awarded the high titles of Hero of the Soviet Union and Hero of the Russian Federation for their work. Of course, there are much more such people in intelligence. But the time for some heroes to tell the time has not yet come, and about others it will come (if it comes at all) only after many years.

Let us remind readers that the honorary title of Hero of the Soviet Union - the highest degree of distinction for services to the state - was established by a decree of the Central Election Commission of the USSR 16 on April 1934.

IN THE PERIOD OF THE DOMESTIC WAR

However, the Heroes of the Soviet Union among the personnel officers of foreign intelligence appeared only in the years of the Great Patriotic War. Colonel Kirill Prokofyevich Orlovsky (decree of the Presidium of the Supreme Soviet of the USSR from 20 of September 1943 of the year) - the commander of the Falcons reconnaissance and sabotage detachment operating on the territory of Belarus was the first to be given this high rank for performing special tasks of command in the enemy's rear. By the way, when he retired, Orlovsky was elected chairman of the Rassvet collective farm in the Mogilev Region, which, under his leadership, became one of the best in the country. In 1965, the Chekist hero was awarded the title Hero of Socialist Labor.

A special period of activity of the Soviet foreign intelligence officers is connected with the Great Patriotic War. Already at the end of June 1941, the newly created State Defense Committee of the USSR considered the question of the work of foreign intelligence and clarified its tasks. They were subordinated to the same goal - the speedy defeat of the enemy.

In the subsequent decree of the Central Committee of the CPSU (b) of 18 July 1941, the party organizations and state security agencies were instructed to "create intolerable conditions for the German interventionists ..., disrupt all their activities, destroy the invaders and their supporters ..., help create guerrilla groups , sabotage fighter groups ".

In January, the 1942, as part of the NKVD, to manage the front-line work of the state security organs, the 4 control was created. It was engaged in the formation of reconnaissance and sabotage groups and detachments in the rear of the Germans. Lieutenant-General Pavel Sudoplatov, head of the NNVS 4 department, was simultaneously deputy head of the Soviet foreign intelligence service. The backbone of the management was the current foreign intelligence officers.

During the Great Patriotic War, 2200 operative detachments and groups acted in the rear of the enemy. More than half of the cadre foreign intelligence officers fought in their ranks. The sabotage and reconnaissance units of the NKVD destroyed 230 thousands of Nazi soldiers and officers, undermined 2800 enemy echelons with manpower and equipment, extracted important military, strategic and political information, which was of great importance for the Soviet military command. Partisan intelligence, which, as a rule, was led by NKVD officers, received, in particular, information that the Germans were preparing an offensive in the Kursk Bulge area in the summer of 1943. This information was also confirmed by a member of the "Cambridge Five", John Kernkross, who had access to the telegrams of the German command, decrypted by the British special services.

Or another example. An illegal scout from the special unit “Winners”, commanded by Dmitry Medvedev, Nikolai Kuznetsov, who acted behind enemy lines in the occupied territory of Ukraine under the name of German officer Paul Siebert, received information that the participants of the “Big Three” meeting in Tehran were preparing attempted by the German terrorists. Since a very limited circle of people knew about the Tehran conference that was to be held in November – December 1943, even in Moscow, this information was given paramount importance at Lubyanka. Soon, from the Soviet agents, embedded in the British counterintelligence service MI-5, received information confirming this information. Thanks to the data received in advance, the assassination of Hitler’s terrorists, headed by Otto Skorzeny, head of the SS secret service, was averted.

It can be stated with confidence that during the years of the Great Patriotic War, foreign intelligence and its staff fulfilled their duty to the Motherland.

For the exemplary performance of special tasks in the rear of the enemy during the war years, nine foreign intelligence personnel were awarded the high title of Hero of the Soviet Union. These are the leaders of the illegal residency in Kiev — Ivan Kudrya, in Nikolaev — Viktor Lyagin and in Odessa — Vladimir Molodtsov; commanders of reconnaissance and sabotage detachments and groups Stanislav Vaupshasov (“Local”, outskirts of Minsk), Dmitry Medvedev (“Winners”, Rivne and Lviv regions), Kirill Orlovsky (“Falcons”, Belarus), Nikolai Prokopyuk (“Hunters”, Ukraine, Poland, Slovakia), Alexander Rabtsevich ("The Brave Men", Belarus, Poland), as well as Nikolai Kuznetsov - the intelligence officer of the illegal squad "Winners".

We told about many of them earlier on the pages of the Independent Military Review.

IN THE COLORS OF THE COLD WAR

In the post-war period, contrary to popular belief, there were not so many Heroes of the Soviet Union among intelligence officers of the KGB. The first among the foreign intelligence officers of this high rank was awarded an outstanding illegal intelligence officer, Colonel Gevork Andreevich Vartanyan. He connected his life with intelligence in February to 1940, being a 16-year-old boy, and for more than 10 years he worked actively in Tehran illegal residency. This was followed by many years of activity under the guise of fictitious names and surnames, working in extreme conditions and difficult situations in various countries of the world. Operations brilliantly carried out by this man could be included in the textbooks of the special services of many countries as an example of what success a scout can achieve.

Of course, in the years of the Cold War there were other intelligence officers, marked by the title of Hero of the Soviet Union. But while talking about them or even calling their names the time has not come.

15 June 1996 by decree of the President of the Russian Federation for the outstanding contribution to the security of our country and the courage and heroism shown at the same time, the title of Hero of Russia was awarded immediately to five veterans of the Foreign Intelligence Service: Leonid Kvasnikov, Anatoly Yatskov, Leontine Cohen - posthumously to everyone, as well as Alexander Feklisov and Vladimir Barkovsky. Somewhat earlier, on July 20, 1995, another legendary Soviet intelligence officer Morris Cohen, a husband and comrade Leontina Cohen, was posthumously awarded the same high rank. Almost in 50 years, Homeland appreciated the work of these foreign intelligence officers. Thanks to their efforts during the Second World War, in particular, the most important materials on atomic energy and its use for military purposes were mined. This made it possible in the shortest possible time to eliminate the US monopoly in the field of nuclear weapons.

For exemplary performance of tasks of the Motherland, the title of Hero of the Russian Federation in 2000 was awarded to the illegal intelligence officer, Colonel Alexei Mikhailovich Kozlov.

He came to foreign intelligence in 1959 after graduating from the Moscow State Institute of International Relations, and already in 1962 he left for combat work abroad. He performed the tasks of the Center in a number of countries in Western Europe, the Middle East and Africa.

From the end of 1970, settling in one of the Western European states, Kozlov traveled to gather information in countries with which the USSR had no diplomatic relations and where crisis situations arose.

In the 1980 year, as a result of betrayal, an illegal scout was arrested in Johannesburg. He spent a month in the South African internal counter-intelligence prison in Pretoria, being subjected to constant torture. Then six months on death row in Pretoria’s central prison. In 1982, he was exchanged for 11 people - 10 of Western Germans and one officer of the South African army. After four years in the Center, Kozlov again left for combat work abroad, which lasted 10 years. Returned to Moscow in 1997 year.

9 May 2007 of the year for courage and heroism shown during the operation to liberate the Polish city of Krakow and prevent its destruction by the German fascist aggressors By decree of the President of Russia, the title of Hero of the Russian Federation was awarded to foreign intelligence veteran Alexey Nikolayevich Botyan.

These awards are evidence that the work of these courageous and modest people in intelligence was equated with feat.

The fate of the scout heroes of different generations clearly shows that at all times in the life of every person there is a place for feat. The desire to be useful to society, to their Fatherland is the desire of every normal person who understands that he has no other country than the one in which he lives and his children and grandchildren will live. These feelings are dormant for the time being in the hearts of people and are most pronounced in the time of severe trials or during periods of crisis situations.