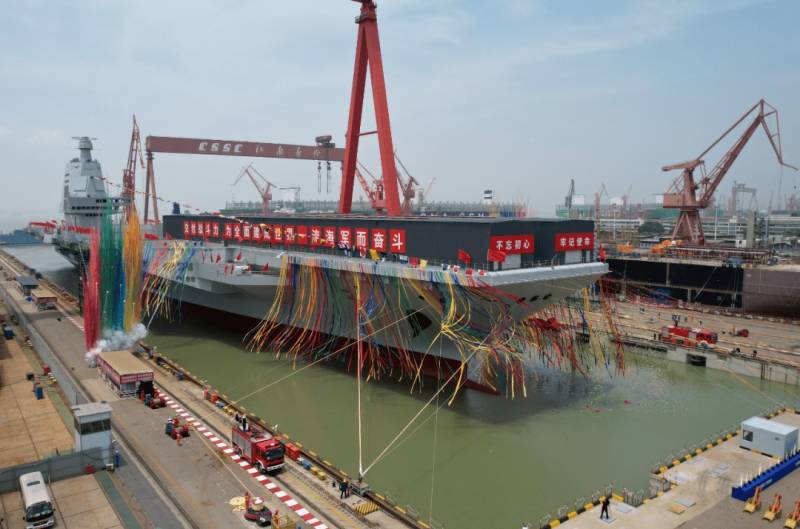 A few days ago, a solemn ceremony was held in China to launch the new aircraft carrier Fujian. This is the third ship of its class for the PLA Navy and the first to be designed from scratch and built by Chinese industry. In the next one and a half to two years, the ship will be completed and tested, after which it will enter the combat strength fleet. It is assumed that Fujian, which has a number of important differences and features, will most seriously affect the potential of surface forces and an aircraft carrier fleet.

ship on the water

The construction of the Fujian aircraft carrier, traditionally named after one of the provinces, was carried out by the Jiangnan Shipbuilding plant in Shanghai from the Chinese state-owned shipbuilding corporation CSSC. The ship was laid down at the end of 2015 or at the beginning of 2016. The installation of structures was carried out in an open dry dock - and did not go unnoticed by intelligence agencies of third countries. Foreign organizations regularly published new photographs of the aircraft carrier at various stages of construction.

To date, the main assembly work on the Fujian has been completed, and it was launched. The solemn ceremony was held on June 17 in the presence of representatives of the highest authorities of the PRC. The decorated ship was taken out of the filled dry dock to the salute volleys and placed against the outfitting wall for further work.

At the time of the withdrawal from the dock, the ship received all the necessary structures and some other equipment. On the finished hull, flight deck coverings were mounted and an island superstructure was installed. Installation of other units, including critical ones. In particular, launch catapults are being installed under the protection of light shelters. During the descent ceremony, banners with slogans were placed on these shelters.

According to known data, the following works require about one and a half to two years. Shanghai shipbuilders and suppliers will have to complete the assembly of structures and install the remaining equipment. Then the aircraft carrier will go on sea trials. The completion of all activities and the acceptance of the ship into the combat structure of the Navy are expected in 2024. 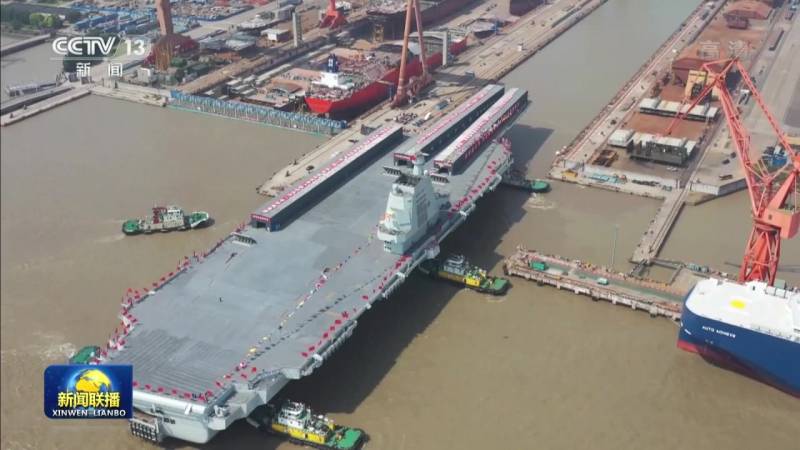 The ship is taken out of the dock

The new Chinese aircraft carrier "Fujian" was built according to the new project "003". This project was developed by Chinese shipbuilders independently, by order and according to the tactical and technical requirements of the Navy. Unlike previous projects "001" and "002", foreign units and components were not directly used or borrowed. As a result, the new "Fujian" is noticeably different in all respects from the two existing Chinese aircraft carriers "Liaoning" and "Shandong", and also has certain advantages over them.

Etc. 003 provides for the construction of an aircraft carrier of traditional architecture. A large flight deck is placed on the body of standard contours; on the right side of it is an add-on. The total length of the ship reaches 320 m with a waterline length of approx. 300 m. The greatest width is 78 m. The displacement is estimated at 80-85 thousand tons. At the same time, foreign estimates of up to 95-100 thousand tons appeared at the early stages of construction.

According to known data, Fujian received a non-nuclear main power plant with power output to four propeller shafts. The type of installation has not yet been specified. It is planned to use a steam turbine power plant, which is a further development of the units of previous aircraft carriers, or a newly created turboelectric one. It is important that the power plant and associated units provide not only the propulsion and power of general ship systems, but also provide energy for special equipment.

The new Fujian, unlike previous Chinese aircraft carriers, received a large flat flight deck; on the left, a traditional corner deck is provided. In the bow of the ship and on the corner deck there are three starting positions for aircraft to take off. Landing will be carried out with the help of an arrester in the aft and middle parts of the deck.

For the first time in Chinese practice, an aircraft carrier is equipped with catapults - two are in the bow, one on the corner deck. It was previously reported that steam catapults would be made for the new ship, but electromagnetic ones were eventually developed. The technical features and characteristics of the catapults are still unknown. Moreover, even their appearance is kept secret. 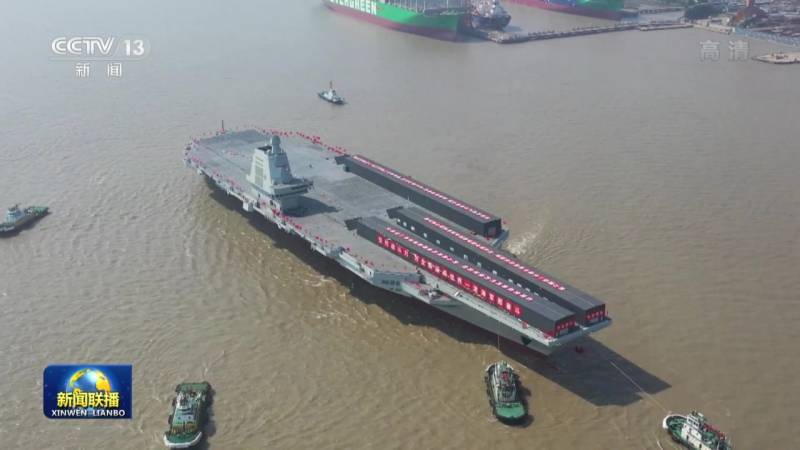 As on other ships, a below-deck hangar is intended for storing aircraft. The movement of equipment between the flight and hangar decks will be carried out by two large-area aircraft lifts. They were located on the starboard side, in front of the superstructure and behind it.

Composition and strength aviation groups are still unknown. The dimensions and displacement of the ship in theory make it possible to have on board about 40-60 aircraft and helicopters for various purposes, as well as to ensure their operation and combat use. Apparently, the basis of the air group will be J-15 fighters and / or the carrier-based version of the FC-31. Helicopters of various types, a new AWACS aircraft and, possibly, a UAV are also expected.

"Fujian" should receive a developed complex of electronic equipment with a surveillance and guidance radar weapons, electronic warfare stations, etc. We should also expect the appearance of weapons. Aircraft carriers available to the Navy for self-defense received 11-barreled artillery mounts and short-range air defense systems. It is unlikely that the third ship in its class will receive a different weapon.

The new aircraft carrier differs markedly from previous ships for the PLA Navy. During its design and construction, new ideas and components were used, due to which it was planned to obtain a number of advantages. In addition, in the project "003" image issues were resolved.

Due to the length of 320 m and a displacement of 80-85 thousand tons, the new Fujian has already become the largest ship in stories fleet of the People's Republic of China. In addition, it turns out to be the largest and heaviest non-nuclear warship in the world, incl. among aircraft carriers. At the same time, the project was developed and implemented only by the forces of Chinese shipbuilding and without the help of third countries. All this shows the potential of the industry, and is also a reason for pride. 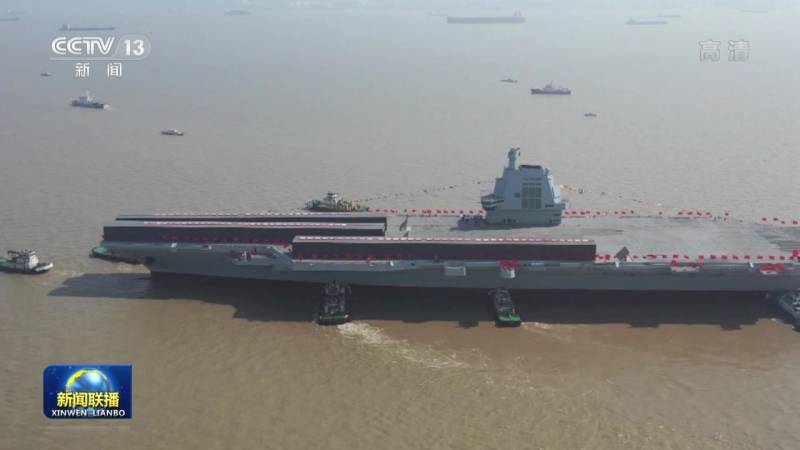 In addition, it was decided to abandon the take-off from the springboard and use electromagnetic catapults. This way of taking off removes the restrictions that are typical for a springboard, and provides new opportunities. It allows you to launch aircraft of different classes and types, both fighters and heavier models. According to various estimates, catapults will make it possible to strengthen the ship's group not only with promising fighters, but also with AWACS aircraft. There is also a fundamental possibility of creating and implementing heavy carrier-based UAVs for various purposes.

In general, the new project "003" is of particular importance for the fleet. First of all, it allows you to increase the number of aircraft carriers and the total number of aircraft on them. In addition, the range of carrier-based aircraft types can be expanded to provide new opportunities.

Thus, China continues to develop its aircraft carrier direction and builds another ship. To solve this problem, he uses his own and others' experience. So, the first aircraft carrier "Liaoning" was actually a converted Soviet-built ship. The second, Shandong, was built independently, but based on the design of its predecessor. Then, using the experience of previous construction and our own solutions, we developed and implemented the next project "003".

It is easy to see that in the new project, Chinese shipbuilders have moved away from simply copying Soviet ideas. New concepts and solutions are now borrowed from US aircraft carriers - the actual leaders in this area. They "peeped" a new deck layout and means for launching aircraft. At the same time, foreign ideas are not just adopted, but revised taking into account their capabilities and needs, as well as to obtain the maximum effect.

This approach, combining one's own and other people's ideas, has proven itself well. With its help, China has already built two aircraft carriers and is completing the construction of a third. In addition, it is known about the development of the next project "004", which will again differ from its predecessors. It is likely that a tried and tested method will be used again in its creation - and this will give predictable positive results. However, for the time being, the main task of Chinese shipbuilders is to complete work on the Fujian and accumulate the necessary experience again.