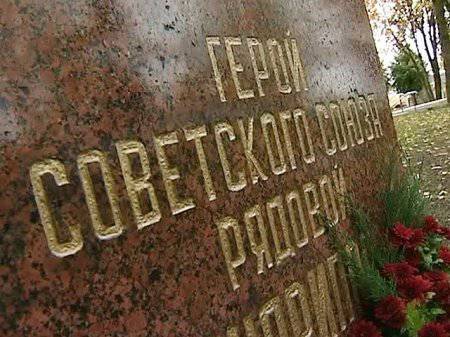 In the Latvian city of Dobele, a mass grave was restored, in which more than eight thousand Soviet soldiers who died during World War II were buried. The restoration of the monument was achieved by one of the veterans, and Russia allocated money for work. Local authorities have promised to look after the memorial.

Around the monument smells of incense - the fraternal cemetery in the Latvian town of Dobele has just been restored and decided to consecrate. Loud speeches were not planned: on the street it was dank, hiding under umbrellas, the veterans came just to look at the renewed monument, to put flowers. But they remember friends, former fellow soldiers, and it turns out all the same emotionally.

Friedrich Sigal, a veteran of the Great Patriotic War, said to the audience: "We must worship, remember and say a kind word to all these heroes who died in the battles for our Soviet homeland, including the city of Dobele."

Dobele city is located in 70 kilometers from the Latvian capital. There are a total of 11 thousands of residents there, and more than eight thousand Soviet soldiers, including the 15 heroes of the Soviet Union, rest in a fraternal cemetery. This is one of the largest fraternal graves in the republic.

Andrei Skachkov, Chargé d'affaires of the Russian Federation in Latvia, said: "The municipality showed not only wisdom, but also human understanding, and helped. I think this is normal. Besides, we have an intergovernmental agreement on the preservation of war graves with Latvia since the First and Second World Wars, therefore we are acting under an intergovernmental agreement. Everything is absolutely legal! "

Words of understanding may seem superfluous - this is a general war! But they are not accidental. A month ago, in another Latvian city, Bauska, they unveiled a monument to the former SS legionnaires who fought under the banner of the Wehrmacht. In Dobele to common stories reacted differently: in pure Latvian, thanks to everyone who helped with repairs., Russia allocated over 350 thousand dollars, there was simply no such money in the local budget. Here they promised to take care and remember. Agris Vilks, executive director of the municipality of the Dobele parish, said: “We must remember that these are someone’s husbands, fathers, sons who have lost their lives and their last refuge here. The natives and our places are buried here.”

Officials thank each other and one particular veteran. This is he - Yuri Ilich Zhitkov - called, wrote, asked. The lieutenant colonel of his stock got it. They clap him on the shoulder and ask: "Satisfied, Ilyich?" He is pleased. "Now I am walking through the streets, and everyone asks me:" How, in which way? Where did you get the money if they have a crisis, and we have such a gift? "This is our pride. The memory should remain and the younger generation," - said the veteran.

This is a gift not only for veterans, but also for relatives of those who considered their fathers and grandfathers missing. In the depths of the cemetery there is a small plate with the inscription: "Mikhail Pavlovich Nadutkin, died in January 1945 of the year." The place where the grandfather was buried, his granddaughter searched for many years. She knew only the approximate name of the village, but that village no longer exists. It was possible to establish that the colleagues of Mikhail Pavlovich were reburied in Dobele, but they forgot to indicate the name of Nadutkin in the lists. Now, a private individual mark of distinction - its own plate. New detail and on the monument - a star appeared on the belt of the Red Army, before it was not. And at the end of the list of all those who rest in the fraternal cemetery, several new names appeared. They were also searched, and finally found.

A few slabs at the end of the wall were left empty. They left it on purpose, as work with archival materials is ongoing. Search engines hope that, perhaps, someone else from the heroes buried here will be able to return the names.