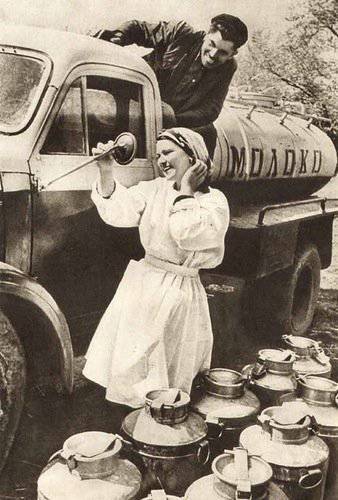 For most modern young people, Soviet women are their mothers and grandmothers. And even great-grandmother. And, at times, looking at these older women, always stuck with recounting the little things at the cash register in the store, it is not easy to imagine what they once were. And all the more difficult to even imagine what an extraordinary fate was prepared for many of them. How did they manage to simultaneously create the greatest power of the world, win the most cruel war and raise us with you?

Usually "Brief Notes ..." I start with the past, with stories. Today I want to start with the present. At present, almost 98 thousand of people of working age live in the urban district of Pervouralsk. Men and women of working age in Pervouralsk also almost equally. However, married men are significantly smaller than married women. How this difference turned out is well known: a significant part of men who are in the so-called “civil marriage” consider themselves single.

Denote cohabitation "civil marriage" began relatively recently. In Soviet times, civil marriage was called marriage, recorded in the civil status acts of the registry office (hence the name went ...). In essence, there were only two types of marriage in the USSR: civil and ecclesiastical ...
In order not to be completely confused during the last census in Russia, two types of marriages were introduced: “civil” and “official”.

Of course, you can negatively relate to the political activities of the former governor of the Sverdlovsk region Eduard Rossel, but speaking out about the “civil marriage”, he was not liberal, explaining to his meanness men who want to live with a woman and not undertake obligations.
Often, in this connection, it is said that in Russia, traditionally “there are nine guys for ten girls”. But this is not true. At a young age (at least in the Sverdlovsk region) there are more men than women by approximately 10 - 15%. Just women on average live longer and at the expense of them statistics show the predominance of women in general. 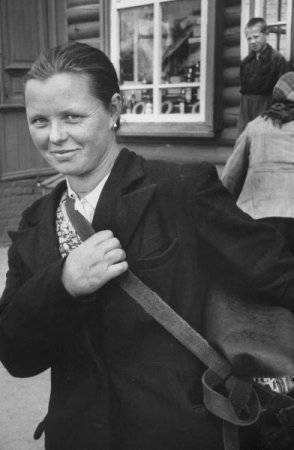 In the USSR, the attitude towards marriage was quite different. Cohabitation without marriage was not a frequent occurrence. Even immediately after the Great Patriotic War, when the marriage age men really felt an extreme shortage, the number of registered marriages sharply jumped. According to demographers, “the population was focused on the fact that unofficial marriage is an anomaly and it has no future.”
Dry newspaper formulations are difficult to convey. But for widows whose husbands died at the front in the post-war years, it was indeed painfully difficult to create a new family. For a few more years they waited for her husband to go to the front - “what if he returns!”

Most of the post-war girls who risked remaining old maids because of a shortage of men often didn’t even think that they could not marry for love.
The Soviet state also related to marriage quite differently than the current one. It imposed a tax on bachelors who want to live in a “civil marriage” and feel like idle.
And families, on the contrary, helped. It's not even about large families. The state welcomed each new marriage and paid money to buy wedding rings. Young families had benefits and to receive free housing.
Why are there marriages ...
Even more revealing may be the attitude towards children. 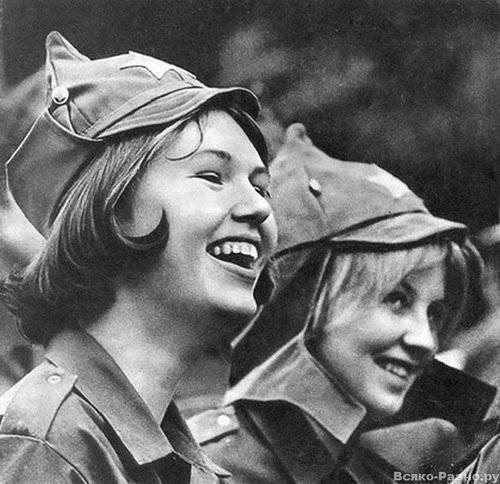 Soviet women, not only to marriage, but also to children were treated very differently than the current ones. Current women "want to live for themselves," so children sometimes see them as a burden, as an irrational waste of money. Here is just one, but a good example. In the 1942 year, along with the evacuees, a little more than 57 thousand people lived in Pervouralsk. We lived in barracks, with the shares in private houses and even in dugouts. Almost everything was sold only on cards. The husbands of a significant part of the women were at the front ...
Do you know how many children were adopted in 1942 in Pervouralsk?
21 man!
In 2011, about 150 thousands of people lived in Pervouralsk. Units lived in barracks, no one lived in mud huts, many women regularly changed their husbands without even registering in marriage. According to rough data, there were 65 thousands of private cars in the city.
Do you know how many children were adopted in 2011?
20 man!
The figure is almost the same as in 1942.
But do not rush to rejoice!
Citizens of Russia from these 20 children adopted only 12.

The list of mothers with many children was also not like the current one. Here are just some of the first-graders - who gave birth to babies in 1940 alone:

The girls were different too!
For example, here’s a short article from the Ural Trubnik newspaper 1942 of the year:

“In the days of the two-man, as well as now, to help the families of war veterans, the Timurov team carried out work on bringing fuel to the apartments of the families of the soldiers, helping to chop and cut firewood. Timurovskim total brought fuel 60 cube. The teams of captains Tkacheva, Oborina, Hoffman during the two-decade drove up and sawed the 20 cube. wood for families of frontline comrade. Yurieva, Zyryanova, Mikheeva and others.
The best teams of school №10 are the teams of captains Hunger Lydia, Mahach Lena, Osadchaya Inna. Timurovites are frequent visitors to t. Zvyagina, Ziki, Pantileevoy and others. The Timurovians of this school transported 1000 kg on their own in the days of the two-decade. Coal for families of warriors. School teams No. XXUMX Dunaeva M., Mironova L., Ponomareva brought up and chopped firewood for families of front-line soldiers 11 cube.
Timur school №15 transported 20 cube. firewood. The best team in the days of the two-decade was the team of Captain Blacksmith Ella. ”

All timurovtsy - girls. The boys ground mines in craft workshops. Now, not many men imagine what it means to cut by hand and split 20 cubic meters of firewood !!! And the majority will not be able to do this. 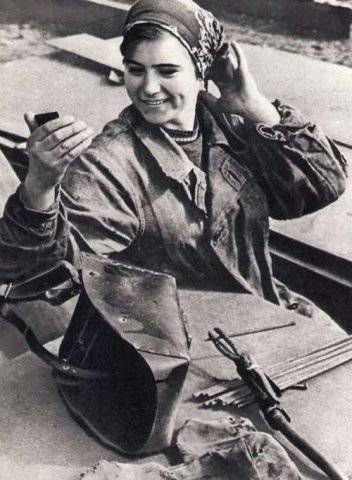 Much has been written about the labor of women during the Great Patriotic War. The topic was churned and slandered. Liberal historians claim that the work in the USSR in general, and even more so, the work of women during the Great Patriotic War, was slave. Forced!
But this is the most vile lie, which the modern, as it were, the men composed about our mothers and grandmothers.
Let's compare.

During the war years, 29 million 574 thousand people were called up to the army and navy in the USSR. This is a huge amount!
If before the war the number of industrial workers and employees in the USSR reached 10 million 967 thousand people, then by 1942 year it decreased to 7 million 171 thousand people
While the total number of workers in the Soviet industry has sharply decreased, the share of women has greatly increased. In 1942, it was already 53%, in 1943 - 57%, in 1944 - 55%.
More than a half!

And in 1944, total mobilization in general was completed in Germany. There was a catastrophic shortage of people, but at the same time there was unemployment. Nothing can be done about capitalism!
Of the 42 million German women, only 16 million were considered employed. What does most of them in the service sector.
By the 1944 year, since the time Germany attacked the USSR, the number of bank employees and trade workers in Germany fell by only 16%, domestic servants became less numerous by 9%.
By the way, in England during the war years, domestic servants remained only in the richest houses, i.e. in units.
In Germans, the share of women in industry is 1941% in 26, 1942% in 28 g, 1943% in 32, the same ratio remains in 1944 ...
Therefore, there were fewer working men in the USSR industry, for example in 1942, than in the German industry in 2,1 times !!!

In the Soviet industry, both women and men worked less in the 1942 year than in the German industry of Germans-men. And if we add the German women-men, the workers of the occupied countries, the prisoners of war of France, Poland and the USSR, industrial workers, ostarbeiters, then the number of workers (especially skilled male workers) will be incomparable.

But all this horde produced less weapons than Soviet women! 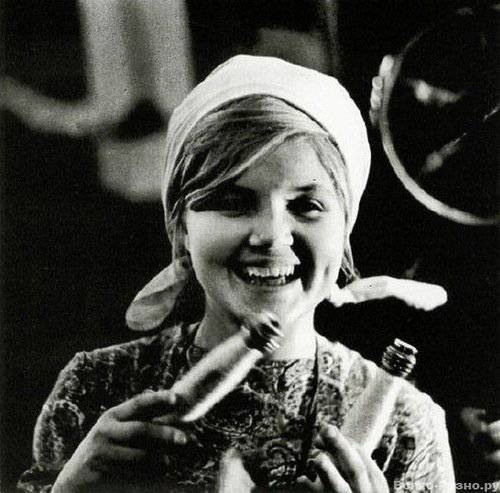 PS: One modern young historian who studied the feats of Soviet people in the 40 of the twentieth century exclaimed in amazement:
“How did you, the people of the forties, who truly loved, really lived and really worked, raised us, such insignificant ones?”
Maybe a young historian was wrong. Maybe among us, now living, there are people not with an empty soul. And a part of the Soviet Union lives in this soul - a little hope of something bright, kind, real!