How to attract young professionals in the field of defense? 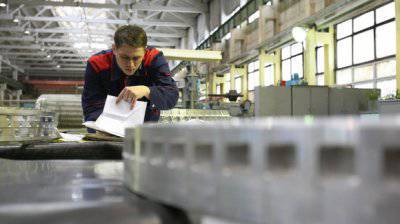 Often we discuss the problem that Russian defense-industrial enterprises cannot fully cope with the obligations imposed on them. Moreover, if before the main problem was the lack of funding and the lack of a systematic approach to loading defense enterprises by the state, then today, it seems, the situation is not better than financing, and sometimes the load is such that it only remains to roll up our sleeves and literally immerse yourself in the long-awaited work.

However, as it turned out, lately, in the field of defense industry has managed to manifest itself and, at least, one problem that hinders the development of the industry. This problem lies in the total lack of qualified specialists who would be able to apply the knowledge gained in educational institutions for their implementation in direct production. The fact is that today, by the most approximate estimates, in the defense industry the number of young specialists does not exceed 20% of the total number of employees. At the same time, the trend, unfortunately, is aimed at reducing this share as well. The average age of specialists in the field of defense industry is far beyond 40. More than a third of the employees of military-industrial enterprises have a pre-retirement and retirement age.

The situation looks even more dubious due to the fact that often the production itself rests on those employees who, because of their age, can no longer always gush with creative ideas in terms of solving certain technical problems. As they say, experience in any business is certainly a benevolent thing, but when the whole industry, directly contributing to the development of the state’s defense capability, breaks the link between generations, and when the accumulated experience, even with all the desire, is simply no one to pass, then there is a direct threat to the industry’s survival in general.

Well, you see, it’s not to solve the personnel problem of defense enterprises with the help of the same guest workers, who, of course, would get down to business with enthusiasm, even without having any technical training for that ...

Members of the Public Chamber also attended to this problem today. In particular, Alexander Kanshin, the head of the National Security Committee of the National Security Commission, outlined his vision of solving the problem of a shortage of young qualified specialists in the military-industrial enterprises. It must be admitted that the proposals of Alexander Kanshin in terms of resolving issues related to the provisions of national security and protecting the interests of servicemen and their families have always been original. In particular, it is worth recalling that the chairman of the aforementioned Commission of the Public Chamber not so long ago suggested that when firing military personnel to the reserve, he was not given apartments, but land in the area of ​​5 ha in any region in which they wished. The new proposal by Alexander Kanshin also looks quite original, but at the same time having a certain logical platform underneath.

So, Kanshin proposes to equate the status of an alternative civil service for young people of military age and work in defense enterprises. According to him, young people who have received appropriate education in the framework of a special state program for training scientists and other specialists in the field of defense, and after that signed a contract with the employer, may well become the so-called alternatives.

The offer is sound. Its pitfalls in it, but still they can be circumvented. The fact is that according to the law on alternative civil service, the ACS itself is a labor activity for the benefit of society and the state. And if the work of orderlies in the homes of veterans and people with disabilities is equal to the alternative civil service, then why not bring this status to work in the defense industry enterprise? Here, with appropriate education and vacancies, there is enough, and workers will always be in demand.

Similar stones in this question may look like this:

The fact is that, expressing the idea of ​​the possible identity of the ACS and work in defense enterprises, Alexander Kanshin mentions the need to implement a new state program to finance the training of young professionals who will later come to defense factories. But at the same time, it is not yet clear how much budget funds will be needed for the new state plan, because it is not clear how many young people will be ready to respond to this kind of proposal. And will it not be that when signing a contract with a defense industry enterprise, the so-called young specialist will only be listed in this enterprise, and all the same gray-haired veteran of the industry will do all the work for him ... Indeed, unfortunately, with the level of corruption that today in our country, many young people will see another loophole in such a proposal, in order to skillfully escape from being drafted into the army.

One of the options that will help solve this problem is that the work of a young specialist in the MIC system may not even be connected with alternative service, but with the military itself. Such an option, in principle, has already been implemented in a certain form in our country: athletes who were and are at the same time military servicemen of the Russian army serving in conscription. In such a situation, a person will be able to help the Motherland much more productively than the one who understands subconsciously that “alternative” still gives a lot more loosening than real service on conscription, although the term of AGN 21 is a month instead of 12. ".

If we consider that tens of thousands of graduates of technical universities, specialized technical schools and colleges are annually called for, then the knowledge and skills of these young people could be applied to the development of the defense-industrial sector. At the same time, the young specialist, with whom the agreement is concluded, is paid the usual wage so that later he could remain at the defense enterprise, and not be eager to go “on the demobel” as soon as possible and forget about the defense industry once and for all.

Such a proposal is also not a panacea, of course, but if it is worked out, it can fully solve two problems: increase the prestige of military service for people with high-quality technical education, as well as get new engineering and working personnel for defense enterprises on favorable terms as for these young people, and for the enterprises themselves.