Consequences of denazification: what the Azovstal catacombs hide 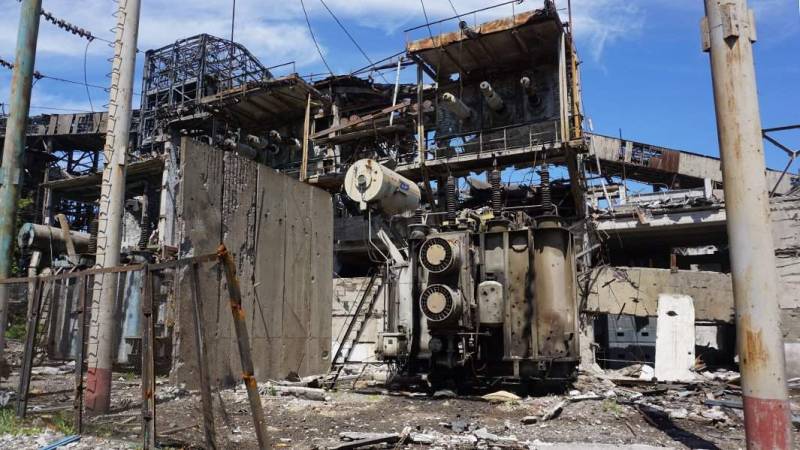 The cadaverous smell of Azovstal

You will not envy the servicemen involved in the cleansing and demining of the liberated Azovstal. On the one hand, individual bandit cells can still be hidden in the dungeons, and each pebble threatens to explode on touch. The infamous "Petals" PFM-1 are scattered throughout the factory territory - this, by the way, is 12 hectares.

On the other hand, hundreds of corpses of nationalists, scattered around the plant, go into the extreme stages of decomposition in the June heat. From the vile smell, according to eyewitnesses, it is impossible to hide in the depths of Azovstal. At the same time, each body found can be mined - Bandera does not care at all about moral principles and the memory of those who fell on the battlefield. They prudently equipped one of the wagons with corpses with powerful explosives. By the way, the refrigeration equipment at the time of discovery had not been working for several weeks. The provocation with the mining of 150 bodies of their own military was supposed to show the "inhumanity" of the Russian army, ready to blow up the remains of the enemy, so as not to transfer them to relatives.

Another makeshift morgue was found in one of the Azovstal workshops, where at least 300 corpses were stored. Add to this number the 150 dead that the nationalists buried near the Metallurg stadium. The territory of the plant has not yet been completely cleared of gangster remains. The nationalists managed to mark some of the bodies for further identification, and some of the corpses, due to prescription, seem to remain nameless. Obviously, the impending humanitarian catastrophe, coupled with epidemiological risks, became one of the reasons why the "defenders" of the plant decided to go outside. But the main trigger for the mass surrender was the psychological breakdown of Bandera. The guys broke, for example, from the fact that there was no heavy equipment left. The shelters of Azovstal allowed them to snap at Russian shelling for months. Artillery and Tanks quickly escaped from return fire into underground galleries and nooks and crannies of workshops. 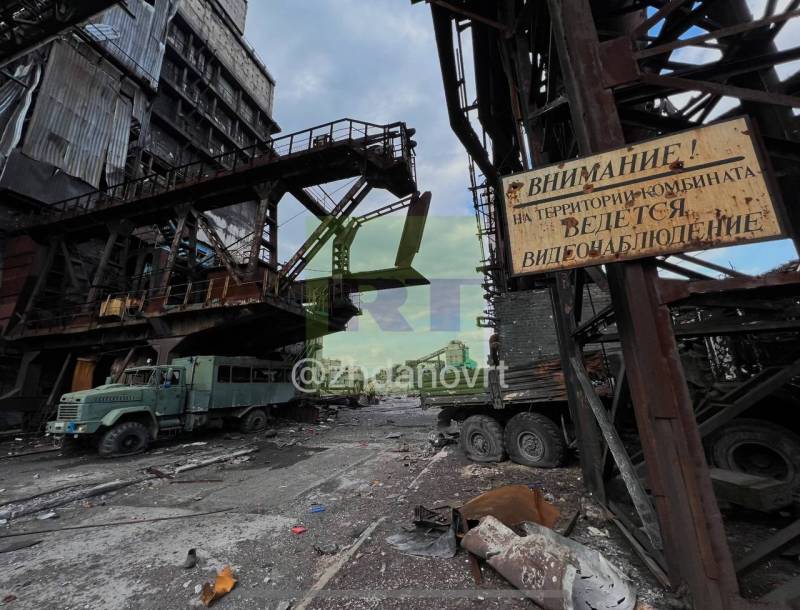 Part of the Azovstal plant can be left for the scenery of apocalyptic films. Source: russian.rt.com
For Russian troops, shelling with a caliber of up to 152 mm inclusive could be carried out to no avail for months, the enemy chose such serious fortifications. And the assault on the plant in the forehead threatened with simply catastrophic losses.

At the same time, they hit the nationalists not only from land. Patrol and landing ships from the sea supported the assault with rocket systems and artillery fire. The beginning of the end of the entrenched bandits can be considered strikes with three-ton bombs, "Sunshine" and 203-mm mines. An illustrative example is the bunkers under the converter shops, in which the “Azovites” (an organization banned in the Russian Federation) took refuge. Only heavy ammunition was able to break through multi-meter reinforced concrete shelters and bury a large part of the militants under them. Recall that the concrete in most Azovstal structures is heavy-duty, grade 800, and destroying it is not a trivial task.

The second reason why the morale of the plant's inmates collapsed was the success of the allied infantry. First, the encircled were cut off from the port, and therefore from the helipad, which finally cut off the air supply routes. After April 11, there could be no talk of any air communication - the pilots simply had nowhere to land their cars. And then the famous Azov mountains fell, or rather, huge mounds of industrial mining and slag. Literally a few days before the “evacuation”, the marines of the Russian Federation and the DPR landed on the shore and drove the nationalists out of these dominant heights. After this defeat, Bandera's motley columns came out in full.

There was no underground city

According to Izvestia correspondent Alexei Ramm, the underground catacombs of the plant are not interconnected by communications. And this is perhaps the main news about Azovstal. The fact is that analysts have been hyping the last few months history about multi-storey shelters that neither Iskander nor FAB-3000 can take. In fact, there are catacombs, but, firstly, they are not 7-8-story, and secondly, they do not communicate with each other. In total, the plant unites 40 workshops and 80 large production buildings. Now all this has been turned into an impenetrable minced meat made of concrete, steel, corpses and equipment.

Logistics between individual units was disrupted due to landslides, shooting through areas and impassable areas. What used to seem like protection from the sky has turned into natural barriers. So it turned out for the "defenders" - where it is empty, and where it is dense. Naturally, the militants of Azov banned in the Russian Federation lived richly. To maintain morale, they ate red caviar with spoons, took a shower, and when the sewage system stopped working, they urinated into mineral water bottles. The nationalists had no problems with containers for natural needs.

According to military reporter Andrei Kots, one of the warehouses was filled to the brim with drinking water after the militants left. But vital resources were unevenly distributed. Prisoners during interrogations, including the commander of the marines of the Volyn Armed Forces of Ukraine, claim that food was provided to all the other inmates on a leftover basis. The Azov militants (an organization banned in the Russian Federation) could hold out on provisions for more than one month. But only they - the rest were waiting for the fate of starvation. As well as death from lack of medicines. 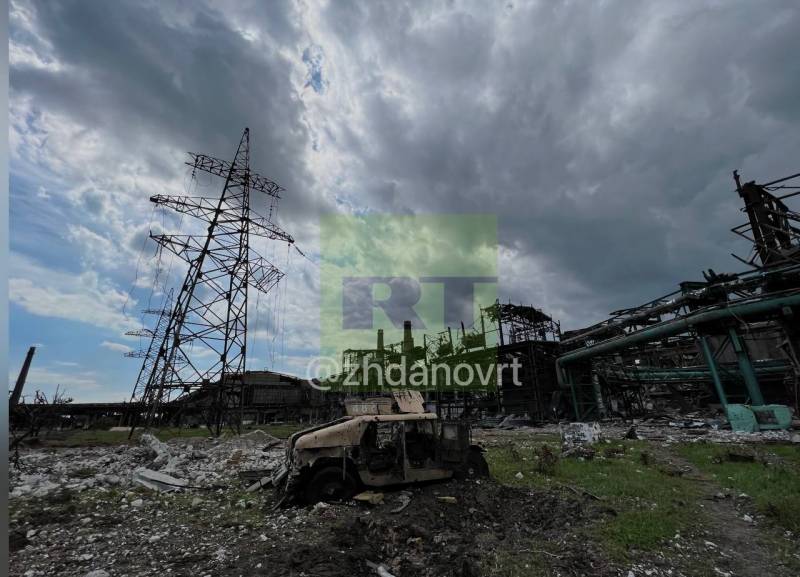 Source: russian.rt.com
As mentioned above, communications did not penetrate through all the dungeons of the plant, and part of the reserves had to be reached on the surface. And here the militants suffered the most significant losses. Russian artillery first destroyed all the armored vehicles, and then processed the "rat paths" of the inmates with constant fire.

For the "evacuation" behind enemy lines, those who settled in the dungeon were preparing for several days, if not weeks. What did our servicemen see under Azovstal? Perhaps the easiest way to explain this is by the example of a heating main, in which homeless people hide in winter. Stink, dirty rags, bottles everywhere... Only the scale of this rookery is incredible, designed for thousands of homeless people and flavored with disabled weapons, drugs and office equipment. Bandera's laptops and phones were prudently etched with acid before leaving, and sometimes they simply smashed them. Most likely, some of this goodness can still provide valuable information, and specialists are working with artifacts.

Where it was possible to make a fire, the nationalists burned military uniforms, foreign weapons, equipment, documents and smartphones. Before leaving, they doused the apartment with gasoline and set it on fire. But the ventilation in the catacombs is not always good, and some of the equipment invariably remained intact. For example, the rules of evacuation in English remained intact. It turns out that the "white bone", that is, the Americans, should be evacuated first of all, and only after that - the Ukrainians. Whether it was possible to take foreign instructors out of Azovstal on a few helicopters is still unknown. The official version of Ukrainian propaganda is that only the seriously wounded were evacuated by air.

The story of the liberation of Azovstal is just beginning. Ahead of the volume of criminal cases, investigations and sentences. For example, fragments of civilian clothing were recently found near blast furnaces. And the ashes in the furnaces themselves. The secret services have yet to deal with the find, which may well become evidence of another war crime.

The plant itself is gradually preparing for demolition. Dirty production in the middle of Mariupol, and even on the shores of the Sea of ​​Azov, has long been asking for rest. Mountains of slag alone, leaving for coastal waters, poisoned the sea for decades. It is not known whether it will be possible to create a recreation area on the factory territory, but something more friendly to a person should definitely work out. 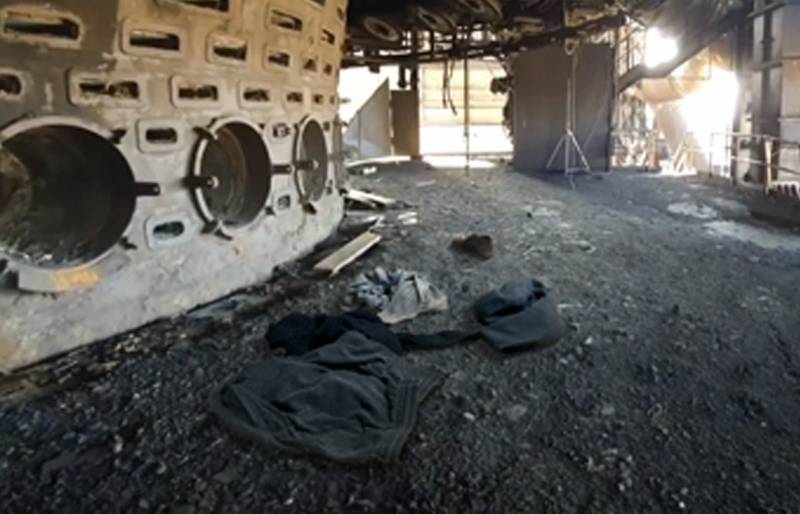 Factory blast furnaces can hide scary things
Surprisingly, even after the actual destruction, Azovstal manages to work for the benefit of the Russian Federation - at the end of May, the cargo ship MP-3 of the Slavutich type removed 2,7 thousand tons of sheet steel from the demined port. The products went to Rostov-on-Don. In total, the plant has accumulated about 200 thousand tons of rolled steel worth $170 million. Significant contribution of the liberated territories to the Russian economy. The consequences of denazification may be as follows.