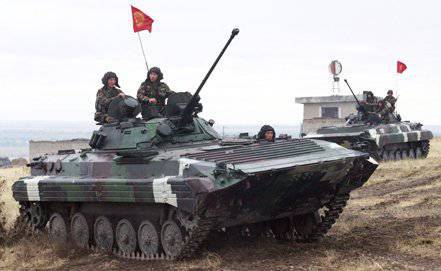 The teachings of the member states of the Collective Security Treaty Organization (CSTO), which began today in Kazakhstan at the Iliysky range, The Unbreakable Brotherhood of 2012, is the beginning of "putting into practice the actions of national peacekeeping units in a single formation." This was announced at the opening ceremony by Deputy Secretary General of the CSTO Valery Semerikov.

“The importance of this task is dictated by the general trend of the development of the military-political situation in the world, including in the organization’s area of ​​responsibility. Peacekeeping is one of the priorities of the CSTO in the field of collective security,” he stressed.

Semerikov noted that according to the results of the maneuvers "appropriate conclusions and corrections of joint training programs for peacekeeping units will be made." "In the future, we will conduct such exercises regularly, along with other training activities in the field of peacekeeping, integrated into annual plans of joint activities of operational and combat training of command bodies and forces and means of the CSTO collective security system," the deputy secretary general said.

In total, about 950 people participate in the training, up to 70 units of automobile and 35 units of armored vehicles, 4 of the Mi-17 helicopter. From the Russian Federation - a motorized rifle company from the peacekeeping 15 th motorized rifle brigade (Samara). It is planned to attract representatives of the International Committee of the Red Cross to conduct classes with personnel on international humanitarian law.

Representatives of the UN Department of Peacekeeping Operations, as well as the diplomatic corps accredited in Kazakhstan, are invited as observers to the active phase of the October 17 exercise.

The Agreement on Peacekeeping, in accordance with which the CSTO Peacekeeping Forces were created, was signed on October 6 on 2007 at the session of the Collective Security Council in Dushanbe, 15 on January 2009 entered into force. The total number of dedicated contingents in the CSTO MS around 4000 people, from they are about 500 - law enforcement officers and MES.

According to the press service of the CSTO, "today there is an increasing demand for assistance from the CSTO in the peacemaking efforts of other international organizations. In this regard, the signing of the Memorandum of Understanding between the CSTO Secretariat and the UN Department of Operations peacekeeping, which reflects the basic principles and directions of perspective cooperation of the parties on a wide range of peacekeeping topics. "