In modern wars it is necessary to exclude the possibility of contact fire collision.

October 9 2012
40
In the context of countering modern means of anti-tank warfare, the principle of preventive defeat of the enemy without entering into contact combat should be put in the forefront. But creating an absolutely universal armored vehicle to achieve this goal is impossible. The fact is that the volume of tasks facing it is extremely large. Obviously, it will be necessary to spread the necessary functions to a number of combat complexes.

The armed conflicts of the last 20 years (in particular, Iraq, Afghanistan, Yugoslavia) do not provide grounds for rethinking the actions of armored fighting vehicles, the tactics of which are based on the experience of the Second World War. However, it is becoming more and more obvious that the use of guided weapons systems has replaced the squall of artillery fire that paved the way for its troops in past years. So, today, more than ever, unmanned aerial vehicles are widely used, as well as qualitatively different ammunition of means of direct infantry fire support.

Punch through any armor

At the same time, armored vehicles remain the main type of armament of the ground forces.

However, the model used today for analyzing the results of the impact on anti-tank weapons against armored combat vehicles cannot claim objectivity in view of the depravity of its logic itself. Indeed, if you exclude these funds from the research chain, you will not be able to form the necessary requirements for the technical appearance of the BMP, armored personnel carrier or tank. In other words, to formulate from what and how these machines should be protected. 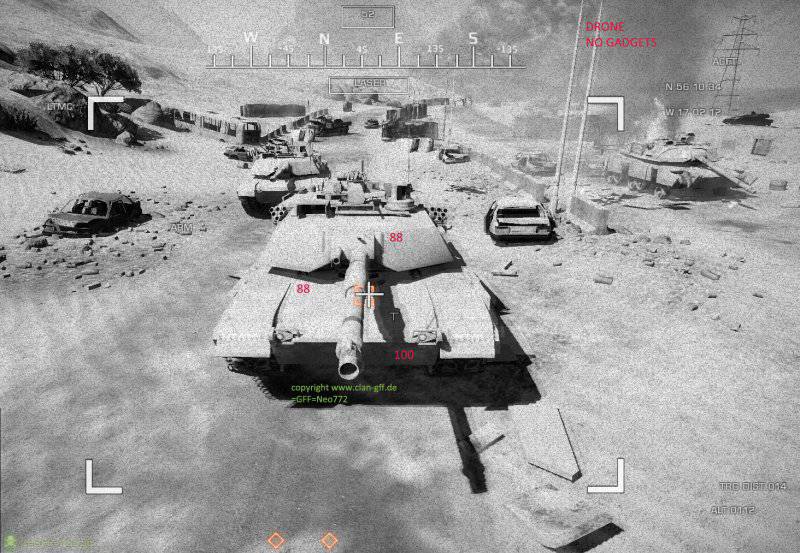 However, the thesis that the latter always wins in a dispute between armor and ammunition is beyond doubt. Especially considering the absence of the possibility of equipping the already developed, arriving in the troops and existing BBM models there with new reservation systems capable of effectively resisting the promising means of fire destruction.

This became finally clear after the appearance of sub-caliber armor-piercing ammunition with a core of depleted uranium, one of the heaviest metals. Moreover, its use in comparison with previously used tungsten in the cores of sabot shells is economically more profitable.

A critical analysis of the current situation makes it possible, as the expert, who had the opportunity to talk with the author of this article, to draw a simple conclusion: the tactics of conducting combat operations using BBM should exclude or make the possibility of using anti-tank weapons unlikely. An example illustrating the effectiveness of this approach is the operation “Desert Storm” (1991), when the Americans, being outside the range of fire assets of heavy motorized units of the Iraqi army, managed to completely defeat them without engaging in a direct clash.

According to experts, there are two ways to create a combat armored vehicle with tactical and technical characteristics that will enable to solve the whole complex of tasks put forward by the conditions of a modern war. The first is the development of a protection complex that will be capable of disrupting the use of anti-tank weapons working on specific cyclograms. The second is to equip a BBM with a system that pre-empts the use of anti-tank weapons with their fire attack.

Thus, according to experts, it can be concluded that small units armed with tanks, infantry fighting vehicles and armored personnel carriers should be considered not as an aggregate of one-type machines, but as an aggregate of AFVs with individual and group protection.

There is also a need to develop machines capable of operating in the collective defense zone as well. This is due to the fact that already in the short-term perspective, the armies of a number of leading world powers will have at their disposal reconnaissance complexes capable of remotely and in real-time monitoring and analyzing the composition, position and character of the actions of enemy troops on the battlefield. For example, Americans are developing in the field of guided munitions TERM (Tank Extended Range Munitions), which using the FSCS (Future Scout Cavalry System) reconnaissance and targeting system of the RAH-66 Comanche helicopter can be used for over-the-horizon shooting at ranges up to six kilometers.

In this regard, military experts noted in a conversation with the author, when forming a new image of a combat armored vehicle, individual protective functions should be given to it based on promising technologies, to formulate a qualitatively new concept of interaction of such vehicles on the battlefield.

That is, new BBM (both tanks, infantry fighting vehicles, and armored personnel carriers) must rely on the information-intelligence system, the capabilities of which will be sufficient to provide conditions for conducting contactless combat (without direct contact with the enemy). In this regard, it is noted that the armament complex installed on these machines will maximize the use of all the information necessary to achieve success in such battles.

It is characteristic that in this direction all the leading global manufacturers of armored machines are developing. For example, the ADATS self-propelled complex (Canada, Switzerland) is able to hit not only ground armored (range up to 8 km), but also air targets. A ATGM on the Polypheme wheelbase (France, Germany) is guided over an optical cable by an operator and can strike at a distance from 15 to 60 kilometers, thus avoiding contact fire fighting, which means radically reducing losses.

Experts agree that it is necessary to ensure that such units as the squad, platoon and company act “in the defense environment”. Obviously, it should include the anti-tank anti-tank system and individual defense systems for armored combat vehicles. In the aggregate, this will ensure the formation of a "protective umbrella" over the terrain where the company (battery) fights. At the same time, units will be able to become elements of the reconnaissance system in the context of contactless fire clashes.

However, experts consider it impossible to equip motorized rifle units with the same type of armored fighting vehicles. First of all, this is impractical due to the need to counteract the means of direct aviation supporting a potential adversary. In other words, it is necessary that at the company-battery level there should be a technique capable of effectively interfering, which does not allow turning the general intelligence into a detailed one (optoelectronic mode). In addition, territorial defense complexes are needed (counteraction to strike complexes of the operational link), systems for suppressing the radar of a potential enemy operating in the millimeter range, and also capable of stably counteracting the so-called backlight. This is of utmost importance due to the fact that modern general-purpose radars have as their main target not a unit of military equipment, but a company and a battery. The only truly effective answer to this, according to expert circles, should be anticipatory informational suppression of the enemy’s fire and reconnaissance assets.

It should also be noted that modern combat operations imply a considerable autonomy for the actions of the motorized rifle division, which is separated from the main group of forces. This, in turn, requires solving the tasks of suppressing enemy firepower with small forces in the shortest possible time, and therefore, as far as possible from a distance. Thus, the task before the division at the BMP of the task of independent maneuvering actions in the depth of the potential enemy’s defense makes it expedient to equip these machines with automated fire support systems capable of adequately replacing artillery systems such as Nona, Vienna and Sprut.

Yes, we can say that we have mortar units. However, the level of training of the gunner, the weight of the mortar with the base plate and three dozen mines (120 – 150 kg of additional load on the platoon), the risk of large losses among infantrymen in the case of contact clashes testify in favor of the fact that in conditions of modern combat the maximum of infantry functions should be transferred to technology. The mortar is suitable only for covert firing at roadblocks, open clusters of manpower or lightly armored vehicles of the enemy at a distance of from two to four kilometers.

The current emphasis on the use of infantry units only reduces maneuverability, which negates the advantage in military equipment and its armament. An example of this is the 31 December situation of 1994 in Grozny and in March of 1996 in Yarysh-Mardy. To avoid such tragedies in the future, as experts note, is possible only through the active use of preventive strikes, as well as the greatest possible mechanization and automation of the battlefield. This will ensure the suppression of the enemy in the shelter or on the march without entering into contact battle. This is the only way to reduce your own damage to a minimum.