Europe did not take into account neither Napoleon’s mistakes nor Stalin’s experience. 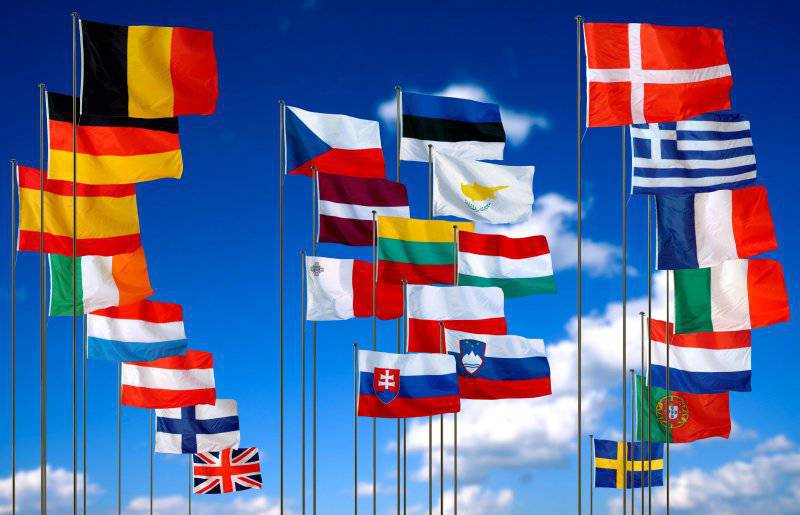 In their quest for expansion to the East, its leaders have crossed all verges of reasonable

Bulgaria said it was refusing to join the eurozone. Romania is also in doubt. Poland declares that it will join it only when it solves all its problems ... In general, the process of European integration has clearly slowed down. How long - life will show.

In the behavior of the above-mentioned countries, it is quite possible to see a kind of "betrayal syndrome". When in the west of Europe everything was fine - they crossed there from the Soviet bloc. Today, they are moving from there, honestly stating that they no longer see the benefit of being in the eurozone: they will also need to take part in solving problems there. And they do not like to solve common problems. They love the strong and the rich to solve their problems. And betray when they see that the latter have problems. But in fact, the problem is much broader than the parasitic complexes of European provinces (provinces not only in the geographical, political and economic, but also in the historical and civilizational sense).

In a sense, the whole история Europe is an attempt to integrate it. As an example of this (kind of, of course) integration, you can optionally consider, for example, even the Roman era. When it was time for fragmentation, the idea of ​​such integration on some basis or other was invariably returned, since all the prerequisites for this were evident: the territory is not too large, it is relatively homogeneous in historical and cultural terms compared to other regions of the world, and civilization is relatively uniform.

In many cases, attempts to integrate the European space failed because they crossed a certain reasonable border and invaded areas that were not prepared for such integration or did not need it.

One of the most successful attempts at integration is the Napoleonic era. If Napoleon had stopped his expansion around 1808-10. - it is possible that the union state he created could have been preserved. "Robespierre on a horse," as he was then called, won first of all not weapons: he won because the ideas of the new century, which he carried with him from revolutionary France, were basically attractive and laid down on more or less prepared ground for them. As Engels wrote: "Napoleon broke the ice of feudalism throughout Europe."

To stop in 1808, or a little later, meant to dwell on the borders of what was then Russia. Napoleon’s entry into the war with Russia (incidentally, according to SM Solovyov, deliberately and deliberately provoked by the policies of Alexander I), for a combination of reasons, had no chance of ultimate success if it turned into a large-scale war on Russian territory. The Russian territory in its condition could not be integrated into a single Europe, in particular, because it was different civilization. Yes, it was also Europe, but a “different Europe”, that is, an alternative variant of European civilization.

The current non-stop expansion of the European civilization zone is already facing the same problem. When France, Italy, Belgium, Germany, Luxembourg and the Netherlands started this process in 1951 by creating the European Coal and Steel Community, which by the year 1993 resulted in the creation of the European Community, they began to integrate a territory that had no clear boundaries within itself. and some of these states at one time or another were part of the neighboring. And they started it on the issue on which the union was required purely economically, that is, they formally integrated what was largely integrated in essence and itself. The integration was quite successful, and the result turned out to be attractive for the neighbors: step by step, it included those who were objectively prepared for this, that is, the natural zone of Western European civilization was integrated.

And, naturally, those who wanted to get the benefits of such integration began to appear, having no objective prerequisites for it. The union of relatively equal ones in this way began to turn into a union of unequal ones; unification of those who objectively stood on one and the same type of development — in association with those who, on the one hand, still needed to be pulled to this level, and on the other, who differed in another type of life organization.

If at first it was about the design of the actually existing integration of the historical core of Europe, then it was about including the so-called periphery of Europe in this union. What is France, Italy, Belgium, Germany, Luxembourg and the Netherlands? This is practically the territory of the empire of Charlemagne, Western Europe proper as a single civilization. What is Poland, Czechoslovakia, Hungary, Romania, Bulgaria and the republics in the territory of the dismembered Yugoslavia? At different times, it is either the periphery of the European empires, or a barrier, a buffer zone that separated Western European civilization from real or imaginary threats from the east. These are territories that have passed from hand to hand for centuries, until the twentieth century they actually had no state of their own.

Yes, each of these countries had moments of historic take-off: the Czech Republic at one time extended to the southern seas, including present-day Croatia, Poland was pushing the boundaries east of the Dnieper ... But all this was very long, and in many cases not for long. They could claim the role of periphery-colonies of the Western European empire, if it were created as a colonial empire. But, on the one hand, it was created as a union union of equals - equal in the first place by type and lifestyle, and then - by rights. On the other hand, the Eastern European countries, having escaped from the camp of socialism, claimed and are claiming the role of not “junior partners”, but equal participants of this association. They did not understand that they were junior partners in the Eastern Bloc, not because someone had discredited them, but because they constantly had to help and pull up their development, and pull up so that their standard of living was higher than the standard of living of who pulled them up. But, being “younger” in development, they, having become accustomed to the role of constantly being pulled up, are therefore in the EU, because they believed that there they would also be “pulled up”, and at the same time they would be given equal rights in solving political issues.

At first, old Europe did not think about it: after all, she was accustomed to the younger ones sitting on the development and quietly voting for what the older ones decide, and to the fact that everything in history is divided by real strength, and not by formal rights. She thought, integrating them into her membership, to strengthen her potential in competition with other world centers, in particular, with Russia and the United States, but it turned out that she should at her own expense increase the potential of her new foreign-language “brothers”, solve their problems and service their phobias.

In the face of Bulgaria, Romania, Poland, the Czech Republic, and so on, Europe saw outposts of Soviet civilization, unacceptably close to its borders, that is, a zone of confrontation. It turned out that, having won the USSR and annexed these territories, it, first of all, instead of gaining power over them, assumed additional obligations for their maintenance and “protection”. Secondly, it created a new zone of confrontation with Russia, which was supposed to overcome the 90's catastrophe and present its capitalist “market” and civilizational rights to these territories. Thirdly, the Europeans received inside the unification a zone of the obvious influence of one of their competitors - the North American one.

Well, France or Germany cannot talk to Poland as an equal! France has always been its patron, its long-range outpost in the confrontation with the German states and the Protestant influence - but it is the patronized outpost, and not an equal ally. There were cases when the French princes became the Polish kings, but they threw this throne, as soon as it came to French interests. Poland has always been interesting for her only a second time, as the periphery. For Germany, Poland was always at all to one degree or another irritant and restless neighbor, among other things, claiming its territory.

The same, by and large, can be said about the perception of Eastern European countries by other states of old Europe. This integration line has created a lot more problems for her than it has allowed to solve, especially since in many cases they have different interests and different psychological visions of the world. In particular, for the old Europe, Russia, with all the anti-Russian complexes taking place, is more likely an economic partner, and in part even an ally in invisible competition with the United States. For many countries of Eastern Europe, Russia, on the one hand, is a potential adversary, on the other hand, it is a tool to foment European complexes in order to raise awareness of its own price and importance as a milestone for Russia’s confrontation. The old Europe in relations with Russia largely needs cooperation, the “new” - opposition, in order to emphasize its role as the “guardians of Europe” and receive appropriate compensation for this.

Plus, the EU faces the problem of claims to participate in the integration of the states that formed on the territory of the USSR, that is, to include in the zone of their concerns and obligations, besides its own periphery of the barrier zone separating the “West” from the “East”, also the periphery of this “ East "- the historical part of another, Russian-European civilization. And now the loose Kiev and Tbilisi usurpers must become the object of attention, anxiety and headache of the old Europe. And since all this will still remain a zone of Russia's historical, civilizational and national interests, to accept them to yourself means to condemn yourself to constant confrontation with it.

The biggest mistake of the leaders of the old Europe was that they, not appreciating the changes in the situation, failed to stop in time - just like Napoleon once did - and crossed the line of justified integration. And instead of creating a belt of demilitarized countries with the status of “eternally neutral and non-bloc” from the countries of Eastern Europe, which at that time would not have caused resistance to Russia, they, in essence, reproduced its quality as an outpost of confrontation, zones of conflicting interests. Thus, having received a headache zone, which, due to the special desire of the “new European” countries to get reinforcements within the EU, has a certain desire for expansion.

In all the measure is important. In 1945, Stalin took into account Napoleon’s experience and stopped on time, did not go to the English Channel, although no one was able to stop him then. But he saved himself from the problems that would have arisen during the reorganization of the Western European countries, in conditions when forces were needed to rebuild his country.

The leaders of Western Europe did not take into account either Napoleon’s mistakes or Stalin’s right decisions. Therefore, they are now tormented by the choice of how to stop, and it is better to push back their unprepared integration movement to the East, or to wait for the moment when the “spring of history” will reject them. Moreover, he will not only throw off the lines to which they will be able to advance, but also question the integrity of the Western European core itself.