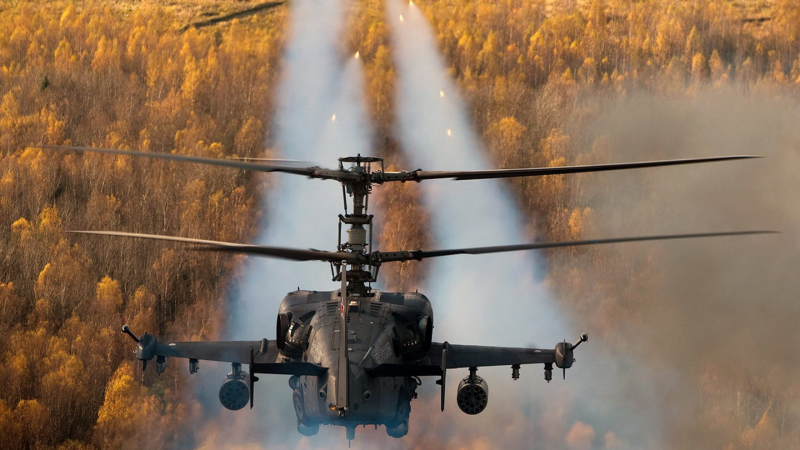 Any military operation is always rich ground for analyzing the actual combat effectiveness of the weapons systems used, and a special military operation is no exception in this respect. There, in addition to aircraft, our Aerospace Forces actively use all models of helicopter equipment and, analyzing the footage from the scene, the question may arise - why do our Aerospace Forces need two models of attack helicopters that perform essentially identical functions. And this is not even counting the MI-35, which, although it belongs to the transport-combat class, is quite capable of performing strike functions.


In my opinion, in the process of conducting the CBO, we have already received enough data to conclude that of our two attack helicopters, one has clear advantages. We are talking about the Kamov KA-52 helicopter. What are these benefits?

In the classic layout of a helicopter with a tail rotor, a shaft is located inside the tail boom, which transmits torque from the gearbox to the tail rotor. In addition, the design of the tail boom implies the presence of a load-bearing frame, which must withstand constant "break" loads caused by the operation of this very tail rotor.

At the same time, the most common MANPADS guidance systems involve guidance along a thermal trail, i.e., to the region of the rear hemisphere of the helicopter. Heat traps are designed to divert missiles to the side, but there are often cases when they do not have time to do this, and the explosion occurs just in the area of ​​\uXNUMXb\uXNUMXbthe tail boom. What does the operation of the warhead of a MANPADS missile in this area lead to? If there is a “breaking” force moment and the beam is damaged by an explosion, it simply breaks in half and “folds”. The helicopter instantly loses control, and from that moment the crew is essentially doomed.

A vivid example of such a scenario is a video from a special operation in Ukraine (you can watch it from the 0:50 mark). 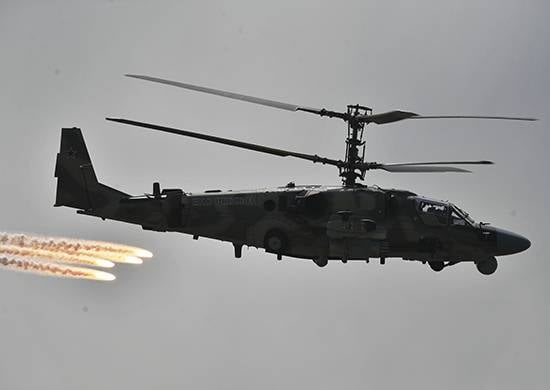 The tail section, unlike the Mi-28, is shorter and much thicker, does not contain a power take-off shaft inside and does not experience constant moments of force for a break. I would venture to suggest that even if this tail is completely torn off (this seems an impossible task for a low-powered MANPADS warhead), the machine, although it will no longer be controlled normally, the loss of control will not be as fatal as in the case of the Mi-28. The crew will have the time and, most importantly, the opportunity to take action to save both their lives and, possibly, the car.

Now let's talk about the possibilities...

The KA-52 helicopters have a real ejection system, which allows saving the lives of the crew even in situations where the helicopter has received heavy damage. The principle of its operation is simple - first, the main rotor blades are fired, and then the “extraction” of pilots from the aircraft in distress is carried out using the classic ejection method.

It is difficult to overestimate this option - every reader, having tried to imagine himself in the pilot's place, will probably prefer to fly in a helicopter that allows ejection than in a car without such an option. Thus, the mere presence of a catapult can already be considered as a decisive argument for the KA-52, in its correspondence dispute with the Mi-28.

Saving the lives of pilots is good, both from a moral point of view and from a practical point of view (if you turn on the cynicism mode) - a lot of money and time is spent on their training, which makes them a valuable military resource, irreplaceable in modern wars. The latter is especially true when it comes to an experienced crew.

And since they will shoot, it means that the crew must be well protected. Thus, one of the "calling cards" of the Mi-28 was its armored capsule for the crew. 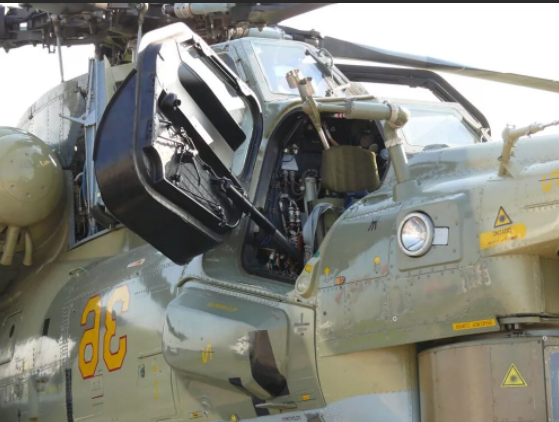 The thickness of the door clearly illustrates the level of booking of the cab. It becomes clear why the Mi-28 is called "flying a tank»
The problem with this approach is that a helicopter, even if it is called a "flying tank", in its essence still remains a helicopter, i.e. every kilogram of weight must be kept in the air, which means that every kilogram of weight inevitably affects others characteristics of the vehicle, such as thrust-to-weight ratio, maneuverability, combat radius and combat load. The presence of an overweight armored capsule reduces all these parameters.

The United States, at one time, took a different path - they implied that the helicopter's weapon systems would have to allow it to destroy the enemy without entering the zone of its air defense, at least the barrel. An example of such weapons are the famous missiles ""Helfair", having a range of up to 10 km and, most importantly, working on the principle of "fire and forget."

As a clear demonstration of what is at stake, I propose to consider a specific example from the NWO zone, which has already been reported on "Military Review".


We are more interested in the second video presented. It shows that our pilots begin to attack the target from a distance of 7,1 km. Then, after the missile is launched, when the distance to the target is 6,75 km, the pilot says "I'm leaving quietly" and begins a very smooth turn to the left (quite "quietly"). The missile hits the target 10 seconds after the start of the lapel. All these 10 seconds, the pilot is forced to fly straight in order to ensure targeting for the entire time that the rocket is flying. Making a slight turn at this moment does not fundamentally change the situation, the helicopter flies along an uncomplicated trajectory, approaching enemy positions, which together increases the risk every additional second of such a flight.

What would change if we had analogues of the Helfire missile in our armament?

Well, firstly, it would be possible to attack the target from a greater distance, not from 7, but from 9 km (1 km in both cases remains in reserve to compensate for possible non-ideal launch conditions). And this is nothing less than two additional kilometers to the enemy positions.

Secondly, the pilot could begin a full-fledged departure to the side immediately after the rocket was launched. This would save those very 10 seconds and would completely avoid an enemy air defense attack in a particular episode.

This example allows you to clearly understand exactly how weapons systems affect the survivability of the helicopters themselves in the process of combat work in practice.

Having relied on such weapons systems, the US and other NATO countries abandoned heavy armor for their attack helicopters. In order to understand the difference in the degree of booking, you can just take a quick look at the famous "Apache". 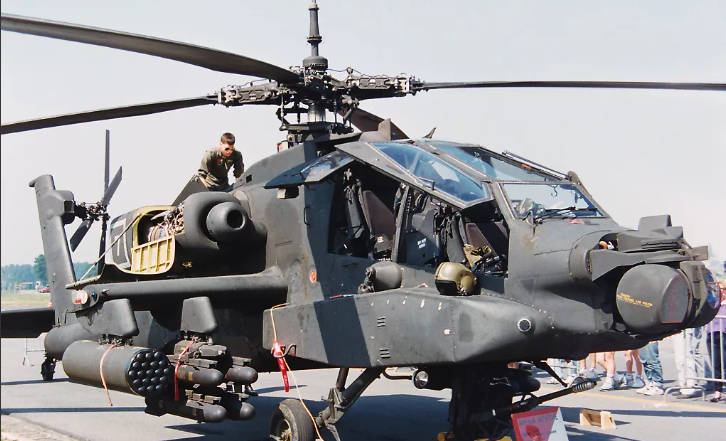 One of the modifications of "Apache". You can visually compare the thickness of the “booking” of doors and cockpit glazing with similar parameters of the Mi-28
The Ka-52 also does not use powerful cockpit armor, which means it does not carry "extra fat" and thus is conceptually much closer to modern approaches to helicopter construction.

It remains only to develop for him analogues of the American "Hellfire", working on the principle of "fire and forget."

Being the hallmark of Kamov helicopters, the coaxial propeller arrangement gives the KA-52 unique advantages. Rotating the propellers in opposite directions allows you to get rid of the tail rotor, which in the classical scheme takes about 10% of the engine power. That is, it can be roughly said that a helicopter with a coaxial propeller arrangement, other things being equal, will be 10% more “powerful” than the same, but with a classical scheme. Which by itself will certainly affect the main characteristics of the helicopter already mentioned above.

Also, the coaxial scheme turned out to be very successful for use in sea-based options. On the one hand, propeller diameters are smaller, and such helicopters are more convenient for deployment in ship hangars. On the other hand, the coaxial scheme makes the helicopter very stable and maneuverable in hover modes, which is very important on navy, both for the operation of take-off and landing on the deck, and for hovering helicopters above the water surface.

Ka-52s showed all their advantages in practice during the NWO, which means that in the future Russia should increase their production, including by reducing the production of Mi-28s. The production of helicopters in larger series will reduce the cost of each unit.

At the same time, the American concept of weapons should be recognized as more promising, taking into account modern trends, which means that it is necessary to create our domestic analogues of the American Helfires as soon as possible. Especially given the fact that the Americans do not stand still and improve their weapons systems, already increasing their range to 16 km.