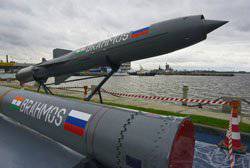 India on Sunday conducted successful tests of a winged supersonic rocket "Bramos", which is a joint development of Russian and Indian experts, reports RIA News with reference to the Indian Defense Research and Development Organization.

The rocket was launched from the Teg frigate commissioned by the Indian side. The contract for the construction of three frigates of this type, worth 1,15 billion, was signed in 2006, according to ITAR-TASS. These ships with a displacement of 4035 tons are equipped with the most perfect weaponsincluding anti-ship attack missile complex "BrahMos".

According to India, the tests were successful, the cruise missile hit the target at a distance of 290 kilometers.