Heroes of our Motherland. Soldier of the Three Emperors - Vasily Nikolayevich Kochetkov 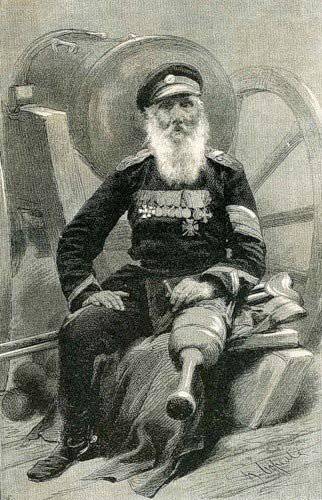 At one of the meetings I heard interesting information about a unique person, our countryman VN Kochetkov.

Kochetkov's uniform was unique: the monograms of three emperors, who were sworn to by the old campaigner, were woven on his shoulder straps. On the sleeve of the uniform in eight rows were gold and silver stripes for service and distinction, and on the neck and chest barely fit 23 cross and medals

Born in Simbirsk Province of Kurmysh County in 1785 year. Kochetkov was a cantonist (soldier’s son). Cantonists from the day of birth were in the lists of the military department. Began to serve in the 1811 year of March 7 number as a musician.

He fought the entire World War 1812 of the year. Then, as part of the Life Guards Pavlovsky regiment fought with the Turks in the war 1828 — 1829. Transferred to the Life Guard Equestrian (Engineering) Division. In the 1836 year, during the life of Pushkin, Vasily Kochetkov had already served the 25 years laid by, but he did not leave the army.

In 1843, the 58-year-old soldier turns out to be in the Caucasus. He is instructed to use uncommon military experience and to teach soldiers to build, strengthen, and build pontoon bridges on “fast rivers”. Kochetkov enlisted in the glorious Nizhny Novgorod Dragoon Regiment. In the Caucasus, he was wounded three times: twice in both legs and in the neck right through. Seriously wounded, unable to move, he is captured.

Having recovered, Kochetkov flees from captivity, showing rare resourcefulness, foresight and courage. In 64, an exam soldier was made an officer. VN Kochetkov abandoned the epaulette, his soldiers' shoulder straps were dear to him, and two years later he retired, after 40 years of active service, at the age of 66 years.

In 1853, the so-called Crimean War began. Vasily Kochetkov asks for war and fights at the Kornilov bastion, in the midst of the Sevastopol defense, in the ranks of the Kazan Chasseur Regiment. Here he was wounded by a bombshell.

By personal decree of the king, who was already familiar with Vasily Nikolayevich, Kochetkov was again transferred to the guard and served in dragoons. Almost ten years have passed, and Vasily Nikolayevich Kochetkov submits a memo to the tsar and asks for the “highest permission” to go to war. So he was from the guard again in his beloved field army in the Turkestan Mounted-Artillery Brigade with a first-class fireworker. He went 78-th year.

For twelve years, Kochetkov served in Central Asia and in 1874, by sovereign's decree, he was transferred to convoy trains of the imperial train.

In 1876, Serbia and Montenegro rebelled against the Turkish yoke. Five thousand Russian volunteers went to help the fraternal Slavic peoples. Kochetkov again persuaded the king to let him go to war. "Servant" in his 92, fought in the front ranks, drawing volunteers with him.

He did not have time to rest in his homeland from military affairs, as the Russian-Turkish war of 1877 — 1878 broke out. 93-year-old Kochetkov fought at Shipka as part of the 19 horse-drawn artillery brigade.

On Shipka Kochetkov from the explosion of the bomb lost his left leg. He survived and served in the Life Guards Horse Brigade and lived to 107 years. Vasily Nikolayevich Kochetkov 31 May 1892 of the year in Vyborg died.

Petersburg artist P.F. Borel made an engraving from Kochetkov's photographic portrait. Filmed Vasily Nikolayevich for 11 days before his death. A hundred-year-old warrior in a Guards uniform is sitting, resting his right hand on his knee, with calm dignity. Between the fingers of his left hand sticks out a roll-up, stuffed, I think, not with a weak self-garden. 23 cross and medals appear in the award list of Vasily Kochetkov. On the left sleeve of a dark uniform there are eight bands of gold and silver - embroidery for the differences in service. He served in four military branches. He fought in the infantry, cavalry, was a brave artilleryman, smart sapper. All the land of the kind of troops he embodied.