The concept of Eurasianism - a threat to the Russian people 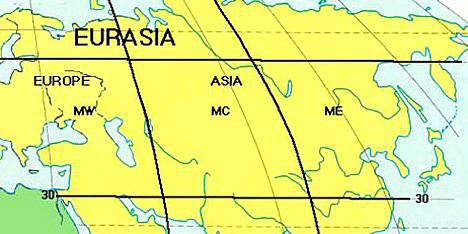 It justifies the Soviet model of national policy and the importation of migrants.

What is Eurasianism and why is it needed? This ideology was extremely popular in the 90-ies, mainly due to the efforts of Lev Gumilyov, its largest popularizer. From his words, it turned out that Eurasianism is a kind of symbiosis between Russians and Turks. Gumilev, a specialist in Turkology, always wrote about the latter with sincere sympathy. From the pages of his numerous works they appeared as “wide-chested batyrs”. Russian such compliments did not get. However, Gumilyov argued that the Russians and the Turks are complementary to each other and, as a result, should live in a single state.

The popularity of Eurasianism among the patriotic intelligentsia was understandable. The Soviet Union (and with it the doctrine of internationalism) collapsed. Only completely unscrupulous people aimed at stuffing their pockets could be patriots of the Yeltsin RF. Until Russian nationalism has not yet thought of. More precisely, “nationalism” personified the RNU, which was strongly supported by the authorities, replicated the practice and rhetoric of Nazism, which made it impossible not only to come to power, but even to rational dialogue with it of any sound forces.

Under these conditions, Eurasianism became the “holy crutch” of patriotism. I remember that I myself read Gumilyov enthusiastically in my student years. He was like Tolkien - an equally fascinating guide through the fictional worlds. However, very quickly I realized that there was no real content behind the theory of Gumilyov. She relied on the hypothesis of some kind of drive - the force that arose as a result of the flare on the sun. Next came the 1500-year life cycle of the people who received the original "solar charge". At first, the people were furious from an oversupply of energy, then, passing through a series of standard stages, quietly died away.

But stories Known nations that existed longer than 1500 years - the Jews, the Chinese. Regarding the Jews, Gumilev wrote that he was a special people, existing in the urban landscape and therefore not influenced by the cycles discovered by him, but he said about the Chinese that they were several different nations united under one name. According to his scheme, the almost extinct “old Chinese” people managed to reach the “flash” of passionarity, get a new energy and “start living from the beginning.”

It seemed to me, a student, that everything here is far-fetched. Indeed, there is no evidence of passionarity, “a flash on the Sun” - a hypothesis not based on anything ... However, Gumilev books were good because they could draw political conclusions from them, and these conclusions were unfavorable for the Russian people. According to Gumilev, it turned out that the Russians had gone through most of the passionary cycle and, therefore, had to give way to other peoples in the near future. Does this mean that we will be replaced by “wide-chested batyrs” or someone else does not interest me much. The thesis is important: it is time for the Russians "under the grass".

I realized then that, according to my mentality, Gumilyov was “ill” more for the Turks than for the Russians, and began to consider him a lobbyist for global Turkic interests. Not without reason, the President of Kazakhstan Nursultan Nazarbayev effectively used the ideas of Eurasianism, effectively using them to assert the domination of the Kazakhs in his state and weaken the role of the Russians, who at the beginning of 90's were almost the majority in Kazakhstan.

Eurasianism as a phenomenon, however, arose earlier than Gumilyov - back in the 20s of the last century. As far as can be judged, the Soviet authorities considered Eurasianism as a reserve ideology. Under certain conditions, she was ready to abandon communism, but she needed an ideology that would justify preserving the Soviet model of national politics. The latter, I remind you, implied a rejection of the creation of a Russian national state and the primacy of ethnic minorities over the “people-godmord” (Lenin's expression).

In connection with the strengthening of the USSR after the victory in the Second World War, Eurasianism was forgotten. A new wave of interest in him came in the 90-s. Today it can be considered part of the official ideology of Russia. For example, the economic union that the authorities are trying to create in the post-Soviet space is called the Eurasian Union. The Russians were even trying to impose a Eurasian identity at one time. Say, what are we Russian? We are Eurasians! .. It did not work out.

Today, the concept of Eurasianism in its pure form is a threat to our people. It justifies the Soviet model of national politics, the massive importation of migrants, the denial of Russian rights to the simplest. And everything is under the label of “symbiosis” of Russians with “wide-breasted batyrs”, which, in truth, is not and never has been. If the states of Central Asia have a “symbiosis” with anyone, then with their kindred Turkey.

Today we see that the ideas of Eurasianism gradually fade away, for they are being replaced by the propaganda of radical Islam. Yesterday's Eurasians, with unwavering lips, say: “Allah Akbar!” And demand the introduction of Islamic religious militia in Moscow. This may seem strange, but in fact there is nothing strange.

The Soviet national model implied a weakening of the Russians due to two factors. The first is the split of Russians into three nations: Great Russians, Little Russians, Ukrainians, and Belarusians; the second is the incitement of all the other peoples of the country against the Russians. It was for this purpose that the USSR provided for the creation of a great number of ethnic states — the union republics, autonomous republics, autonomous regions, and autonomous districts. There was a period when even national areas existed. A strange thing, but the USSR refused to build a single nation on the basis of the Russian people, although this could be done easily. From the point of view of strengthening the Soviet statehood, this would be the right step.

Today, for the same purpose, the massive importation of migrants and the promotion of radical Islam lobbyists are used. The goal is simple - in no case to prevent the emergence of the Russian national state. Now Russians in Russia 80%. The delivery of migrants leads to the erosion of the ethnic balance, which means that it again allows us to say that Russia is not a Russian state, but a multinational one. Although no one doubts, for example, that Germany is a country of Germans, Georgia is Georgian or Armenia is Armenian.

We again want to build the USSR, this time within the borders of Russia. However, the Soviet national model cannot exist in principle for a long time and will collapse just as it did in the USSR, Yugoslavia and Czechoslovakia. But this problem does not bother anyone. After all, the ethnic collapse and disintegration of Russia will cost the Russians the next tens of millions of lives. And the goal is only this: to bring the disappearance of the hated Russians from history closer. This is the essence of Eurasianism, if you look at it under a microscope.

At the same time, the very word “Eurasianism” does not frighten me. As a bait for the post-Soviet states, it is quite suitable. The only important thing is that Russia itself was not an unintelligible “Eurasia”, but an ordinary modern national state like Germany or the USA. Then our neighbors (completely the national states of their peoples!) Will treat us with respect, and it will be easier to negotiate with them. First and foremost, an alliance should be concluded with those with whom we were a single nation a century ago, with Ukrainians and Belarusians.

And the “wide-breasted Turks” ... They are good guys. It is possible and necessary to talk about cooperation with the national states of the Kazakhs, Uzbeks, Kyrgyz and Tajiks, but only when our own national state stands behind our backs. For a large empire, within the framework of which a demonstrative disregard of the rights of the pivotal Russian people (namely, Russia is now), is carried out, it will always be defeated in a clash with the nation state (albeit small). And no Eurasianism can hide this sad fact.