What are the real numbers and objective facts 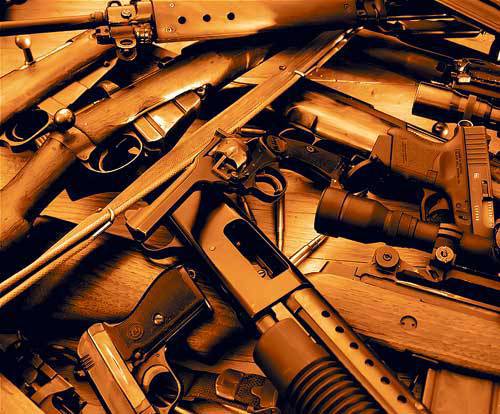 The military-industrial complexes of the leading countries of the planet form an important part of the modern world industrial and scientific-industrial sector. The total global turnover of purely military products in 2009 can be estimated at about 400 billions of dollars. At the same time, the internal order plays a dominant role in the activities of defense companies.

WE WORK FOR YOUR OWN

Despite widespread attention to arms exports, the total global volume of interstate deliveries of military products and related services in 2009 can be estimated at about 60 billion dollars (excluding the supply of second-hand weapons and military equipment). Thus, exports occupy no more than 15% of the sales volume of the global defense industry. In other words, the export of armaments is frankly secondary in comparison with the work of the world military industrial complex on national governments and national armed forces.

This circumstance is not surprising if we recall that the main military manufacturer in the world is the United States of America.

The last decade has been a period of rapidly increasing military spending in the world. The total military spending of all countries grew from 707 million dollars in 2001, to about 1,531 trillion dollars in 2008, although the subsequent global economic crisis slowed down this growth. The main contribution to this indicator was made by the United States, leading wars in Iraq and Afghanistan and, in general, the “global war on terrorism”, Russia, China and India, as well as the third world countries. 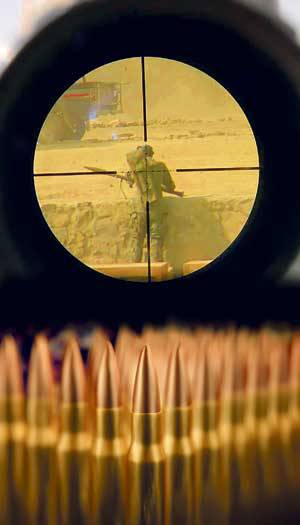 The role of the US military industrial complex can be judged by the 100 rating of the leading defense companies in the world (see table).

In this rating, 20 of the world's leading defense companies 15 are American and only five are formally European, and in reality most of the sales of nominally British BAE Systems are in the USA. By the way, Russia's largest defense-related company, the Almaz-Antey Air Defense Concern, is the world's largest in the 22 ranking table.

With all this, the role of the world military industrial complex should not be exaggerated. 400 billion dollars looks like a colossal amount, but it is lost against the background of indicators of civilian industries, primarily trade, oil and gas production, banking and insurance, automotive, telecommunications and information technology. Suffice it to say that the turnover of the largest American retail retailer Wall-Mart (the largest company in the world) - simply speaking, supermarket chains - in 2009 amounted to 408 billion dollars, that is, was comparable to the numbers that characterize the work of the entire global military industry. 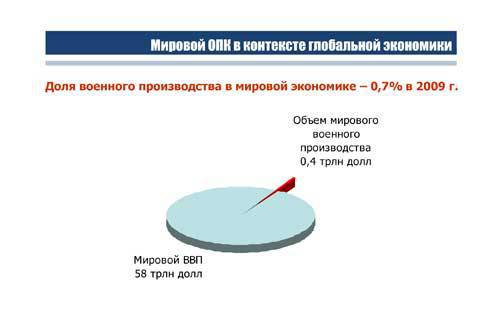 Such large international oil and gas companies as Royal Dutch Shell, Exxon Mobil and BP, in 2009, had sales at the level of 250-280 billion dollars each. Japanese Toyota - 204 billion dollars. Russian "Gazprom" (50-i company in the world ranking) - 94 billion. 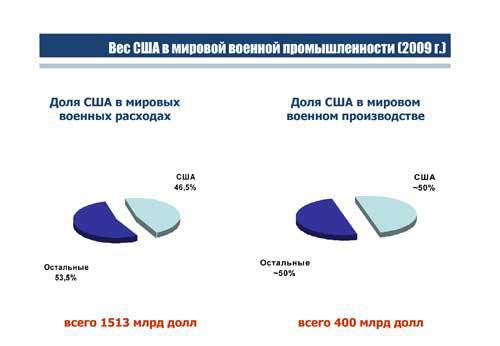 Thus, the military business is currently not super-profitable and so economically and politically significant in the scale of the world economy. Manufacturers and traders weapons no longer the main magnates of world business, but the weight and influence of national defense industries in developed countries are very limited. The world arms trade, with all its political sensitivity, is not the sale of oil or consumer goods, but a much narrower and economically insignificant segment of world trade. For example, the global market for contemporary art (only modern!) Is now estimated at 18 billion dollars a year.

At present, the leading position among the defense companies of the world is occupied by multidisciplinary associations, the dominant role in which is played by the aerospace and electronic industries. The largest US (and therefore global) defense corporations, as well as BAE Systems, have grown from aircraft manufacturing companies. Thus, the aerospace and electronic industries now dominate the world’s defense industry, and aviation weapons systems are the most expensive of all types of military equipment. 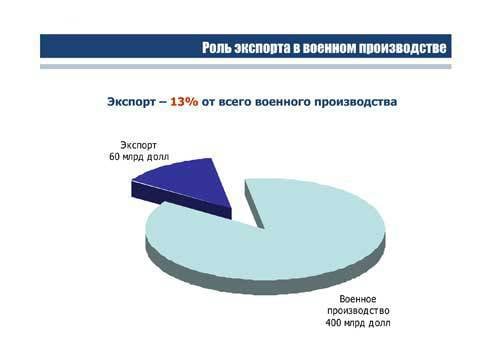 Considering the leading defense companies of the world (from the same top twenty), we can single out the following main features:

- structurally, they are diversified holdings;

- The basis of their activities is aerospace, rocket and electronic industry;

- they actively seek to diversify and increase the proportion of the civilian sector in their activities;

- they were created in the last two decades as a result of active consolidation and absorption of other companies;

- with regard to military sales, they depend primarily on the domestic market. 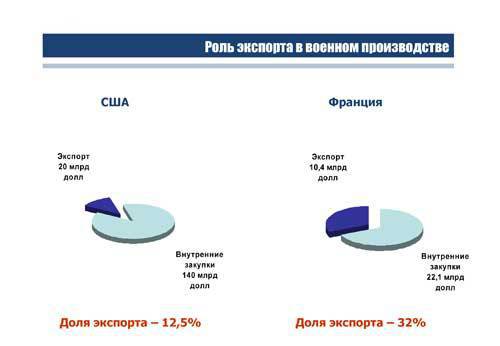 Opportunities for cooperation with the same oil and gas or telecommunications sector promise such prospects, compared to which purely military production is obviously losing. For example, the leadership of the same Lockheed Martin voiced ambitious plans (or rather dreams) of bringing the structure of its military and civilian sales to the proportion of 50 on 50 (now the civil sector of the corporation accounts for no more than 7% of sales).

Thus, the goal of many giants of the global defense industry is to become more civilian companies than military ones. For the main money is made in civilian industries, and not in the military.

Despite the colossal US military spending and the impressive defense budgets of other Western countries, the long-term prospects of Western defense companies do not seem so optimistic. The United States faces the inevitability of reducing military spending in order to reduce its bloated budget deficit. In view of the need to cut the military budget, the Pentagon was forced to abandon a number of promising programs. It suffices here to mention the ambitious program of creating a promising system of ground combat equipment FCS. 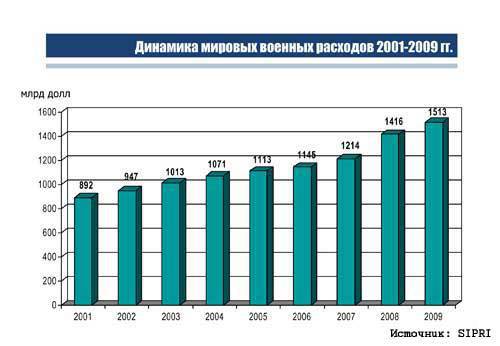 As for Western Europe, the trend of cuts in military spending has been observed for a long time, and has accelerated in the last couple of years. The new conservative British government plans to reduce the procurement military budget from 11,7 to 9 billion pounds by 2014 year. France cuts down on military purchases in 2011 for 1 billion euros. Germany began the next cycle of very radical reductions in the number of Bundeswehr and military spending. Japan continues a continuous trend of reducing military spending since 2001. 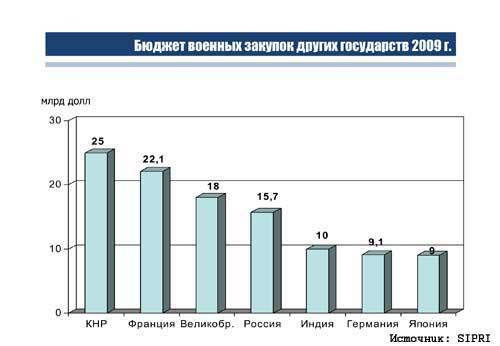 Such trends in relation to the domestic markets of defense products in the West, combined with the ever-increasing cost of military R & D, which makes it difficult for defense companies to manage them, forces the latter to search for sources of expanding sales of armaments, military equipment, equipment for them (but limited) and diversification of production by increasing the share of civilian products. Finally, the merger of defense companies in order to create integrated and diversified holdings capable of more efficient operations in shrinking national markets and accumulating resources to finance promising R & D, on which market competitiveness depends, remains the most decisive resource for the development of the military-industrial complex in the West.