Modernization kit "Berezhok" for the BMP-2

October 6 2012
23
The upgraded car was presented at the joint international OSU "Don-Antiterror" in September 2012. The attention of many participants was aimed precisely at the modernization of the famous BMP-2 - BMP-2M “Berehok”. Now the developers are upgrading the BMP-2 vehicles, which are in service with the Algerian army. There is unconfirmed information on the conduct of this modernization for the Ministry of Internal Affairs of Russia. 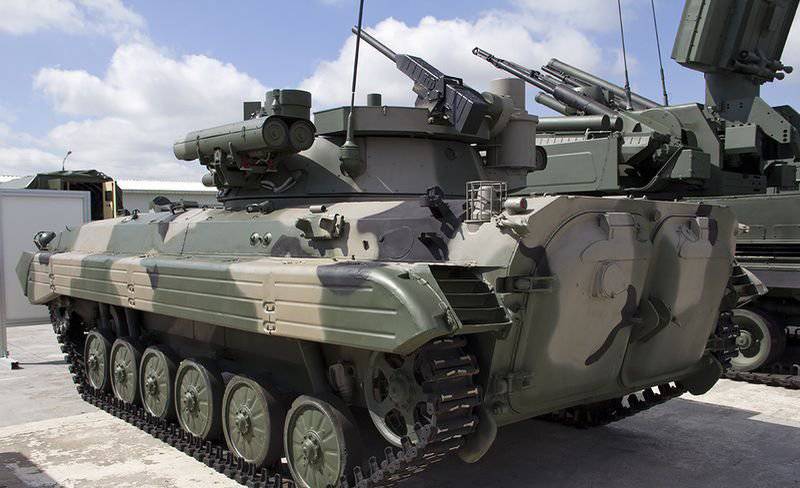 The Russian army is still in standby mode - the BMP-3 practically does not enter service, the Kurganets-25 BMP is still a promising project. The military can only look at the armament of the Interior Ministry units.

The installation of weapons on board the machine is done very well, which allows us to speak of greater efficiency in carrying out the tasks set in comparison with the Terminator fire support vehicle. Containers with missiles are covered behind armored screens, which reduces the likelihood of damage to the weaponry by shrapnel or small arms. The design of PU and main units is noticeably simpler, which leads to cheaper costs and increased reliability. The grenade launcher mounted on the upper part of the turret received considerable angles in the vertical plane and a circular one in the horizontal plane. The BMP-2М Berehok wins at the Terminator and in the vertical corners of the main armament complex 1.5 times (against 45 degrees). The upgraded vehicle can be the most modern, inexpensive and reliable model of light armored vehicles for the departments of law enforcement agencies who are able to perform their combat missions at any time under any conditions.

BMP-2 launched into the series at the beginning of 1980, and until the end of the decade mass production of infantry armored vehicles did not stop. The mission is to transport infantry units to the front of the theater of operations, increase the mobility of infantry units, provide protection and support for weapons, even when the enemy uses nuclear weapons. The Russian military department has today 5 000 machines BMP-2 and its modifications.

In connection with the end of the factory life, there was an urgent need to modernize the combat vehicles, to change the BMP-2 in service with another machine, you can not even dream in the coming years. One of the options for the modernization of infantry combat vehicles becomes MK "Berezhok".

The analysis of the use of BMP-2 and modern solutions in the creation of foreign analogues showed the need to improve all the basic characteristics of the machine and its weapons. The highlight is the use of infantry fighting vehicles for delivering effective strikes against major combat tanks enemy equipped with protection of dynamic type.

The main disadvantages of the BTR-2 are:
- firing at night, 800 meters against 2000 meters in modern infantry fighting vehicles;
- reloading anti-tank complex "Competition", associated with the probability of hitting a crew member and the lack of fire in the movement;
- OMS of non-automated type, will not allow the use of fully modified weapons.

Modernization
The updated combat vehicle "Berezhok" is the brainchild of the state unitary enterprise "KBP". According to the developers, the car in this modernization has acquired firepower comparable to that of 3-4 BMP-2. 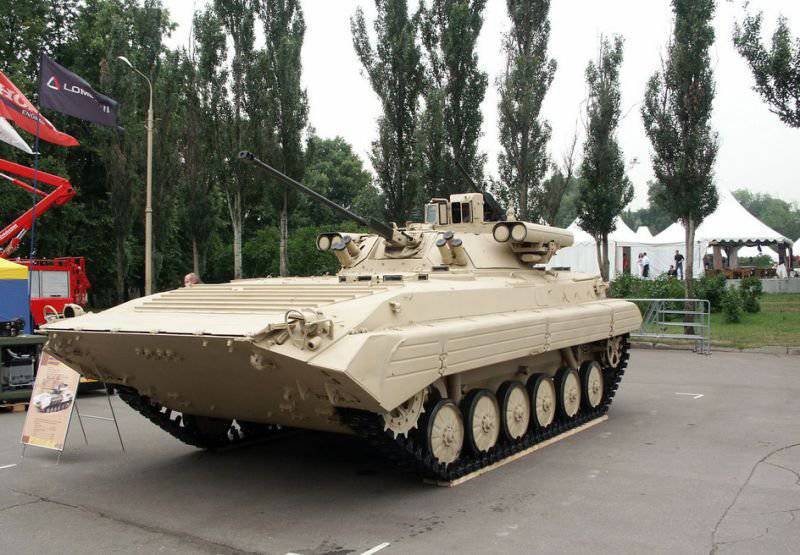 This upgrade immediately interested the foreign users of the BMP-2. The first to become interested were the Indian military, from which she received positive feedback. The first foreign contract for the MK "Berehok" developers concluded with the Algerian representatives in 2005 year.

Installed equipment and weapons:
- SUO from MK "Berezhok" - all daily, automated. It has an automatic pairing. Unification with the Bakhcha complex;
- ATCM "Cornet" with an effective range of 5 kilometers. Has the ability to fire at any time of day on lightly armored objects;
- gun caliber 30mm. Destination - firing at lightly armored objects and infantry of the enemy;
- AG-17 automatic type grenade. Purpose - striking areas;
- UTD-23 engine with increased power in 370 hp Increases the speed of movement on unequal roads - 44 km / h. Specific thrust at maximum speeds of more than 60 percent. Reduced, though slightly fuel consumption - about 5 percent.
- Commander's sight combined type (day / night). Unification with gunner’s sighting equipment;
laser rangefinder for sight. Additionally, it is used to guide guided missiles;
- modern stabilizer units installed weapons. Improved shooting accuracy;
-Digital BV and a set of sensors for calculating parameters such as ammunition, catch of cannon tilt, angular velocity and characteristics of the atmosphere.
-Subbalant armor-piercing projectile "Trident". It became part of the main ammunition. It has improved penetration characteristics. 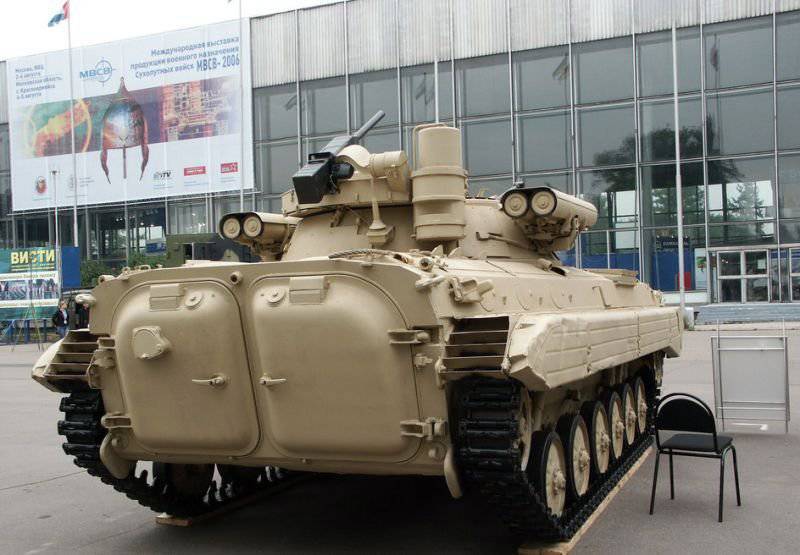 The Kornet complex was equipped with a laser-beam semi-automatic guidance system. Rocket armor penetration to 1.3 meters. Such indicators will allow the machine to be used to defeat modern main tanks with dynamic protection. Multiply PU is used. Execution of 2 container with missiles. Combat effectiveness increased due to improved rate of fire and maximum damage. There is the possibility of a salvo strike on the target (2 missiles).

Increases the overall firepower of the 30mm AG-17. Ammunition - 300 ammunition. Stabilization of the vertical plane. The use of a grenade launcher in combat conflicts significantly increases the effectiveness of fire and the defeat of lightly armored objects, enemy manpower. Effective application distance to 1.7 kilometer.

In the course of the modernization, the commander received a panoramic sight, slightly changed its location with a grenade launcher, PU "Cornet" received armored protection. This modernization and became known as CM "Berezhok".

The main purpose of the car remained unchanged, additionally having the opportunity to solve problems of countering air attacks and the use of main tanks.

Efficiency
The effectiveness of MK "Berezhok" can be appreciated from the following example - when attacking a stronghold with reinforcement of a BMP company, the use of weapons on the enemy’s movement led to a reduction in the loss factor by more than two times, the costs (lower consumption of ammunition) reduced almost 2 times.

Disadvantages
The requirement of the possibility of overcoming water obstacles leads to poor security of the machine. The BMP will suffer greatly even from manual weapons (armor-piercing bullet), but to talk about the detonation of a high-explosive charge or the use of BMP guns / machine guns. Increased vulnerability on the battlefield.

The experience of using infantry fighting vehicles in military conflicts - Afghanistan, Chechnya - remained unaccounted for in Berezhok. In some other versions, this issue is given a lot of attention. However, one thing remains the same - the neglect of the life of an individual soldier. The lack of a receiving level of comfort with a close internal accommodation of the crew.