Getting ashore is a non-trivial task for floating armored vehicles 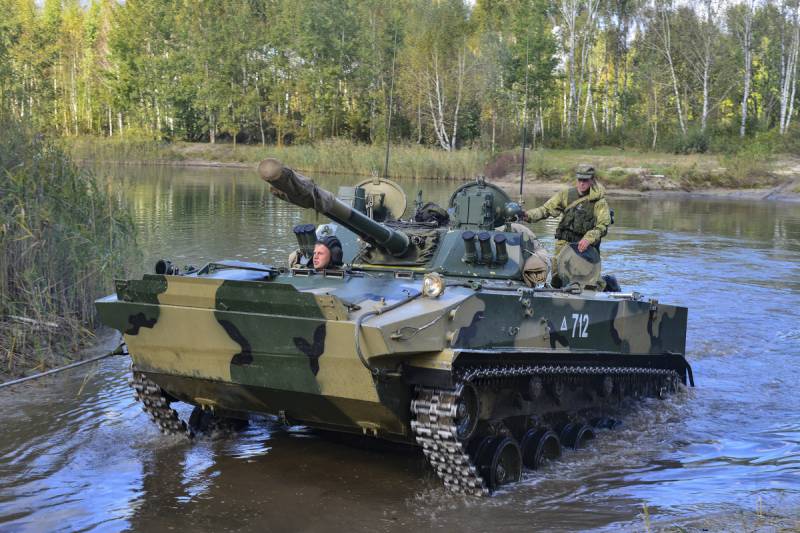 For skeptics assessing the skill level of the author of the material "Floating armored vehicles - a dead end branch of evolution", I had to draw on data from serious scientific studies. Let's try to answer the question about the futility of floating armored vehicles, using the work of scientists from military technical universities. At the end of the article are links to materials that have become the basis for reflection.

The authors, who substantiate the great difficulties in the operation of floating equipment, work at the Omsk Armored Engineering Institute of the Military Academy of Logistics named after General A.V. Khrulev at the Department of Combat Tracked, Wheeled Vehicles and Military Vehicles. And also in the Siberian State Automobile and Road Academy. With a great deal of confidence, we can state that these are quite reputable universities with professional scientific and teaching staff. 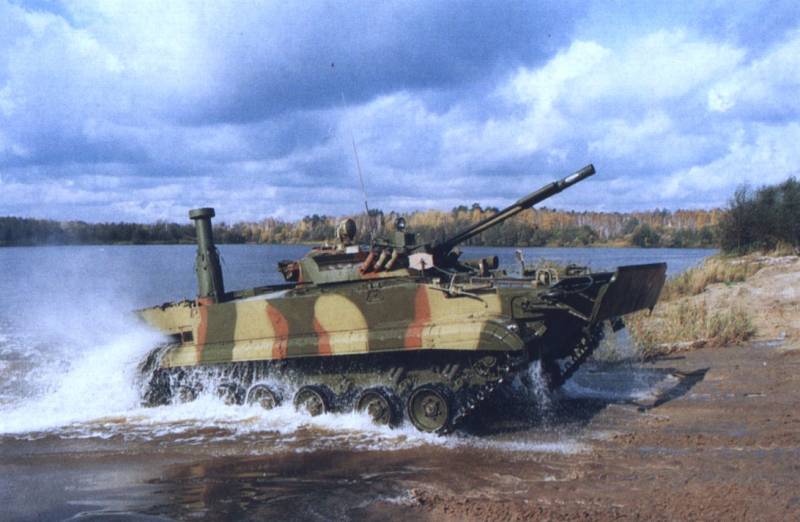 Source: war-book.ru
First, a little theory. Why do troops need floating armored vehicles? Especially which is armed with anti-tank weapons and artillery. Of course, to maintain a rapid offensive and overcome the water barrier on the move, that is, with minimal preparation. But here the first difficulties begin. Domestic infantry fighting vehicles, armored personnel carriers and infantry fighting vehicles know how to swim very well, but getting ashore from the water can sometimes be quite difficult. If you believe the publication "Methodology for assessing water barriers" (author - V. M. Kryat), dated 1978, then three-quarters of the natural banks of the rivers are inaccessible to any amphibious equipment. Since that time, if something has changed, it is insignificant.

Difficulties when going ashore arise due to marshy soil, steep slopes, ledges and the presence of vegetation. Yes, and the driver is desirable to be a jeweler. First of all, he must approach the shore strictly perpendicular to the plane of movement, which is extremely difficult when crossing the river. If the wheels or tracks go ashore unevenly, this will complicate the already difficult task of lifting out of the water.

You can, of course, increase the speed of approach to the shore and thereby try to jump ashore on the move. But here, pardon the pun, there are pitfalls. For example, to double the speed of the BMD-4M on water, you need to increase the engine power by 8 times! And this entails an increase in the dimensions, mass of the floating machine and the reserves of transported fuel. In general, the circle closes.

As noted in a number of studies, in most cases, the water area is generally insurmountable for floating equipment, just because of the difficulties with getting out of the water. This, in particular, is mentioned in the "Results of comparative tests of BT equipment in marine conditions" (Kubinka, 1978).

The tactics of using ground forces implies strikes against the least protected sectors of the enemy's front. In the overwhelming majority of cases, none of the commanders will decide to attack the superior forces of the dug-in enemy just because behind him there is a reliably explored river, which, if the attack is successfully developed, will be easy to overcome on floating armored vehicles and drive the enemy further.

In reality, as soon as the offensive hits a river barrier, the engineering units look for a suitable place to build a pontoon bridge or raft. The thing is that no one can guarantee that an infantry fighting vehicle, armored personnel carrier or infantry fighting vehicle will be able to successfully climb to the opposite bank. Yes, even under enemy fire. Then again the question arises - why initially sacrifice armor for the sake of buoyancy?

For several years, the Omsk Armored Engineer Institute has been conducting interesting modeling of the mechanics of the exit of various types of floating equipment to the coast. The main work is carried out by Candidate of Technical Sciences, Associate Professor O. A. Seryakov. As the author rightly points out, the main factors for the success of armored vehicles coming ashore are: low pressure on the ground, high adhesion of the mover (wheels or tracks) to the coastal soil, and the presence of a traction force not associated with a land mover.

In the latter case, a water jet or propeller is used, which has a significant impact on the success of the landfall. For a comparative assessment, a wide range of armored vehicles was used - domestic BMP-2, BMP-3, BMD-4M, BTR-82M, American M113A3 armored personnel carriers, LVTP7 armored personnel carriers and the French AMX-10P infantry fighting vehicle. In a good way, full-scale tests should be carried out, but this is far from always possible, and if possible, it is very expensive. And where can you get foreign combat vehicles in working order? Therefore, the authors limited themselves to mathematical modeling of processes.

For reference: the full name of one program sounds like "Program for calculating the probability of overcoming a shallow section of a water barrier by a floating vehicle of armored weapons." The date of registration in the All-Russian Register is January 13.01.2021, 7. In one of the series of studies, where the LVTP3, BMP-113, M3A82 and BTR-15A armored personnel carriers virtually participated, they chose a sandy seashore with a slope of 7,2 degrees. On the conditional sea, a conditional calm was provided. By the way, the slopes of the landing-accessible sections of the sea coast usually should not exceed 3 degrees. And excitement is allowed in XNUMX points.

As it turned out, tracked vehicles with water cannons had the greatest advantage, and the relatively light BMP-3 turned out to be noticeably more successful than the American amphibian for the Marine Corps LVTP7. According to calculations, the domestic vehicle did not get stuck at the beginning of the landfall with a 100% probability and did not stop at the end of the landfall with a 97% probability. The heavier "American", despite two water cannons (the BMP-3 has only one), showed, respectively, 79% and 97% of the probability of landfall.

Worst of all things were with the M113A3 armored personnel carrier, deprived of a water cannon or propeller, which did not go ashore in half the cases. Ukronazis who are now using Lend-Lease tracked armored personnel carriers are advised to heed the conclusions of the Omsk military researchers and not use vehicles to overcome water barriers, but immediately surrender along with the equipment to the allied forces.

The most interesting findings concern the BTR-82A, which demonstrates 79% efficiency at the beginning of landfall, but declines to 51% by the end. The reason is the unfortunate location of the water cannon, which “at this stage, due to the exposure of the intake hole, stops its work, and the wheel propulsion unit cannot provide sufficient traction for traction on the ground with low bearing capacity.” As a result, the authors generally do not recommend using the BTR-82A in amphibious assault. A Russian armored personnel carrier can confidently climb only ashore, the slope of which does not exceed 10 degrees. 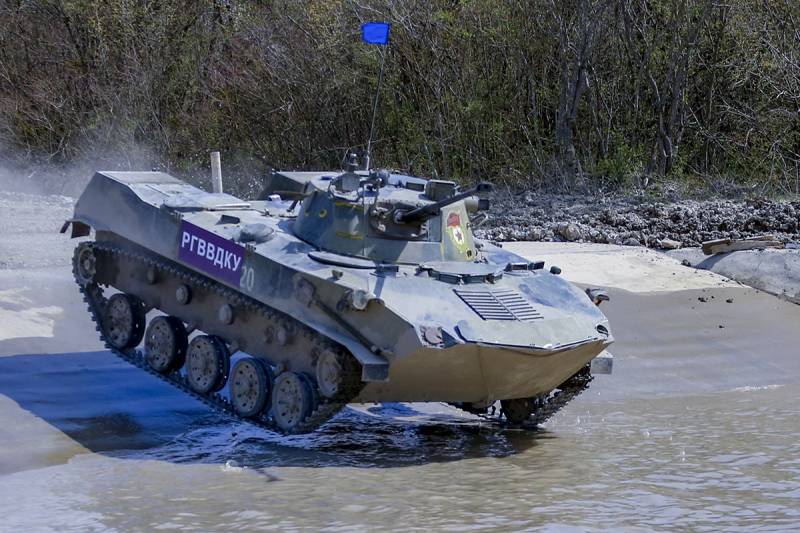 BMD-2. Source: mil.ru
From the works of Omsk scientists, a logical pattern is revealed - the lower the weight of the floating machine, the higher the probability of going ashore from the water. Of course, if it is a tracked vehicle with a water cannon, or better with two. Obviously, mounted floats will not help here either, which only increase the displacement and buoyancy of armored vehicles, but in no way affect the ability to go ashore. Rather, they even interfere due to the size and excess weight. That is why the French AMX-10P weighing 14 tons is somewhat more successful than the Russian BMP-3 weighing almost 19 tons.

In modeling landfall with a slope of 5-15 degrees, the vehicles are still comparable, but the BMP-20 takes a 3-degree slope in 70% of cases, and the French one in 78%. Moreover, the Russian vehicle has a great chance of getting stuck just at the end of landfall due to the fact that the hull has almost completely emerged from the water, and the BMP is stuck in the ground due to its greater mass. If we talk about testing the BMD-4M, then this machine turned out to be even better than the BMP of the third series due to less pressure on the ground and higher power density. 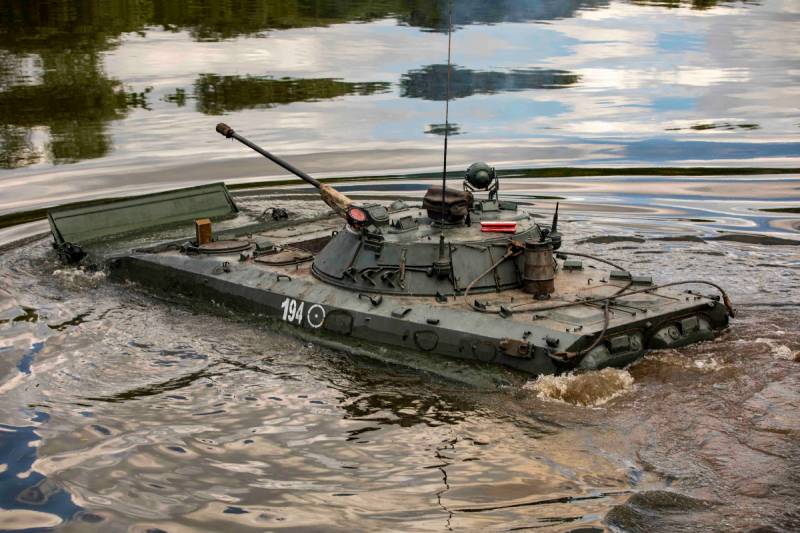 Source: function.mil.ru
Now about the BMP-2, which, as you know, is devoid of a water cannon and moves afloat due to caterpillars. A separate study was conducted for the car, comparing the probability of landfall with different soils - hard rocky, sandy, silty on a solid base and swampy. The angle of inclination is the same - 15 degrees. The BMP-2 coped most easily with a rocky bottom, in 64% of cases with sand and 68% with muddy soil. But the swampy coast turned out to be an insurmountable obstacle for an armored vehicle in 100% of cases. According to the results, the BMP-2 is also not suitable for the Marine Corps, like the BTR-82A. In fairness, we recall that the conclusions are made by the authors solely on the basis of mathematical modeling.

The authors see a way out of such a depressing situation in the installation of jet boosters or winches with ejection anchors on armored personnel carriers and infantry fighting vehicles. The second, of course, is from the realm of fantasy, but you can think about impulse rocket launchers in the stern of floating armored vehicles. According to Omsk residents, accelerators with a thrust force of 15 kN increase the probability of reaching a 15-degree shore from 51% to 95%. A rocket launcher of 20 kN guarantees an almost 100% probability. Plus it's not that expensive. For the BMP-2, such powerful boosters are not needed - according to calculations, 10 kN of thrust is enough.

Based on these calculations, the reader can draw a conclusion about the prospects for the further use of floating armored vehicles in the ground forces. Or is it much more reasonable to leave such a specific technique only for the marines.