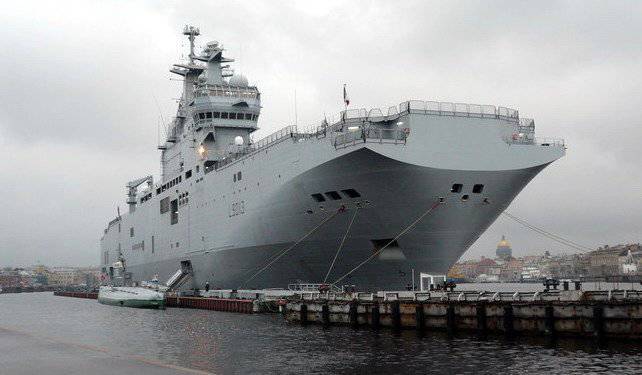 The first two French Mistral helicopter carriers should be delivered to Russia in 2014 and 2015. Military analyst at the Institute of International Strategic Relations of France Philippe Migault expressed his assumptions to the Voice of Russia why the ships would be stationed in Vladivostok.

Mistrals are not just carriers of combat aircraft, but also the so-called force projection ships, that is, a tool for a universal solution of a local conflict that unites the Air Force, presented in the Russian version of the Kamov helicopters, namely the eight Alligators (K 52 K) and seven military transport vehicles K 29, that is, the total 16 combat-ready units.

On ships can also be based amphibious assault forces of up to 450 people and 13 modern tanks or 70 BRDM (n), that is, combat reconnaissance and patrol infantry vehicles. The 210-meter hull is capable of speeds up to 18 knots, i.e. more than 30 km / h.

The French pass on the technology of building ships to the Russians, including the CIUS (combat information management service) and avionics (avionics). It is the electronic filling of the Mistral, which so far has no analogues in the Russian fleetturns these warships into a single living organism, capable of a high degree of conjugation of the various branches of the troops present on the ship, not to mention the various air defense and anti-aircraft defense systems.

Also, this system allows you to integrate the ship in real time into the overall operational-tactical scheme of actions of the numerous fleet. In other words, these combat units are able to work equally as raiders, as well as part of a single group in the mode of maximum synchronization of actions with other ships. NATO has always been jealous of passing on its secrets. Therefore, many Western politicians, including Obama, have perceived this contract as a betrayal by the French arms.

The military analyst of the French Institute for International Strategic Relations and the former military columnist of the Le Figaro newspaper, Philippe Migault, analyzed the reasons that prompted the Russian command to choose Vladivostok as a place of deployment for ships supplied by France. After the transfer of the first two Mistrals to the Russian side in 2014 and 2015, the other two sides will be built under license by the Russian side in the Baltic shipyards, which will allow our engineers to get a full package of know-how on new technologies.

- Mr. Migo, the first two Mistrals, which received, according to Russian Navy Commander Admiral Vladimir Vysotsky, the names Sevastopol and Vladivostok, should be assigned to the naval base of Fokino, which is 116 kilometers from Vladivostok. In your opinion, what prompted the Russians to rank the two newest vessels to the Pacific Fleet? What are the strategic tasks that Russia can entrust to the crew of these warships?

- I think that we are talking about strategic goals. After all, the advantage of this type of ships, whether it is air or helicopter carrier, is just the so-called naval diplomacy. Of course, these are military ships. But I think that as far as the Mistrals is concerned, they are still lightly armed, and their task is rather to emphasize the presence and sovereignty of Russia in this region.

For example, France, for example, sent Clemenceau in due time, so that, as we say, he would draw circles on the water in the region of Lebanon, where our national interests were threatened. So I think the main task of these vessels after their redeployment to Vladivostok is to emphasize that Russia possesses its Far East relative to some other countries in the region. I am sure that the Russian Mistral will not have the task of countering the Seventh US Navy, which is present in the maritime theater of action. For this, they simply do not have enough combat potential. But Japan is able to signal the position of Russia on the Kuril Islands or show its flag to China, which has just pulled down its first aircraft carrier from the stocks. The Russians emphasize that Russian lands will remain so. In this, in my opinion, the main task of these helicopter carriers.

- Now they talk a lot about shifting the center of gravity of the world economy to Asia. The political center, by the way, too. Do you think that sending Moscow their new ships to this region is an indicator, a litmus test of the change in the Russian geopolitical course with a turn in the direction of the Pacific facade of the country?

- This answer has two planes - heart and mind. From the point of view of reason, the last APEC summit in Vladivostok showed that Russia insists on shifting the center of gravity to the Asia-Pacific region. In fact, global commerce is concentrated there. The new Russian policy fits into this framework.

Well, if you give free rein to your heart, for my part I will say that, by its culture, Russia is a European country. I hope that this new alignment of Russian interests does not mean the final loss of Russia's interests in Europe due to the actions taken by the European Union with respect to Russia. After all, the European Union is not yet Europe. There are other opportunities for European construction and, in particular, the construction of Europe together with Russia. I hope that Russia will not turn completely toward the East, which will be very regrettable both for us and for it.

Perhaps Philippe Migault hints at the policy of General de Gaulle, who sought to expel the American bases from Europe and create European armed forces based on an alliance with a strong Russia. This line of behavior to this day meets the understanding of a certain part of the French High Command, which continues to strive for the revival of sovereign France. But now neither the current president of the country nor his closest associates seem to totally disagree with this.