The new look of the Ukrainian army ... Is there hope? 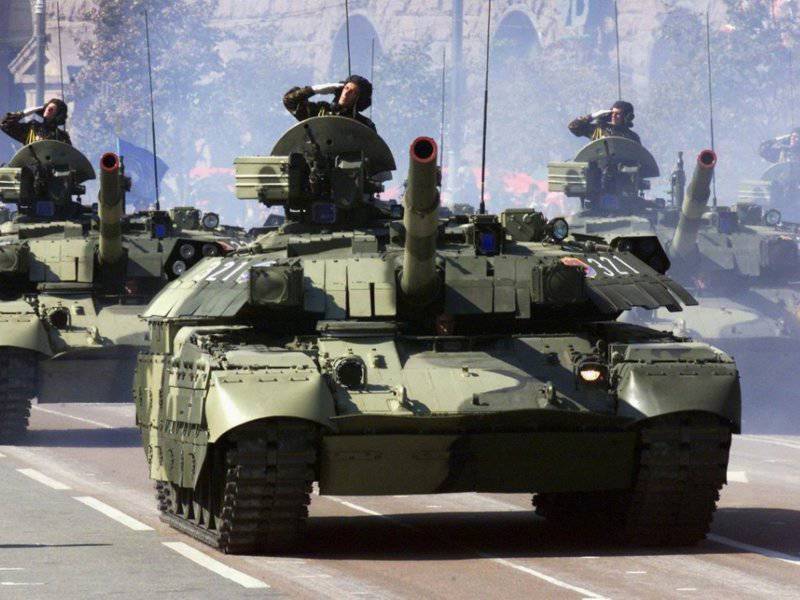 Increasingly, in periodicals specializing in military topics, one can find sharply negative publications regarding the state of the Ukrainian army, that such a army simply cannot have a future, because the situation is hopeless and the only thing to count is the repair and modernization of existing military equipment. ... Meanwhile, this year much more funds were allocated from the state budget for the development of the Ukrainian armed forces than in previous years - an example about 16,5 billion hryvnia. At the same time, it was planned to spend about 2,5 billions directly on the development of military equipment and weapons. But here the question arises: well - the money was allocated, maybe in the future, it will be allocated, but will it be enough to make the Ukrainian army more efficient, modern and efficient? Indisputable is the truth that everything is known in comparison. Unfortunately, the current level of development of military developments leaves much to be desired. In order not to be unfounded, let us give a small example - if at the beginning of the 90s of the last century there were about seven hundred programs for the development of weapons and military equipment in Ukraine, now there are only three dozen. Yes, in principle, it is understandable. Most of these programs had to be abandoned, because the state simply did not have enough money.

But, according to representatives of the Ministry of Defense, the leadership is looking to the future, so the State Space Agency, the National Academy of Sciences, as well as many other structures are actively involved in military developments. And such cooperation has already brought certain results. So, for example, among the recent developments, which have already been created by Ukrainian defense industry enterprises and are being put into service, are BTR-4 armored personnel carriers, the Oplot T-84 tank, ZTM1 automatic guns, and Dozor armored vehicles -B ", Malachite ground-based radar stations, Bars-S parachute systems. In addition, the new generation of Skif and Sapsan missile systems (though the last only project), as well as the Adros optical-electronic suppression system, anti-tank and aviation rockets and other weapons and military equipment.

By the way, this whole technique is very modern, meets the new requirements. So, in particular, the BTR-4 is suitable for use in any climatic conditions (from -40 to + 55 degrees) and at any time of the day. Tank T-84 can carry out combat operations with both static and moving ground targets. True, it is necessary to say at once that the “Stronghold” is currently in service with the Ukrainian army in a single copy, although there were prerequisites for getting more 10 machines of this kind by the end of this year. Meanwhile, a large consignment of "Oplotov" will be sent to Thailand. Apparently, they need more, and their somehow manage ...

The Sapsan boasts a firing range of over 250 kilometers. In addition, in the presence of the Ukrainian armed forces there are two military transport An-70, which under certain circumstances could serve as a good basis not only for the Ukrainian, but also for the Russian military aviation.

Despite the fact that a large number of weapons and military equipment, which are created in Ukraine and have good export opportunities, potential buyers are somehow not in a hurry to buy Ukrainian equipment. And the reason for this is ridiculously simple: when these same buyers are interested in whether there is such a technique in the presence of the Ukrainian army, there’s nothing to say ...

In such a situation it is very difficult to say that the armed forces of Ukraine will have good prospects in the near and more distant future. Moreover, the representatives of the military department keep all the achievements of the Ukrainian "defense industry" under a great secret. And it remains only to assume what can surprise the military engineers, designers, scientists and the manufacturers themselves. Nevertheless, certain information on this issue appeared in the press.

So, in particular, as it became known, Ukraine is actively developing high-precision weapons. As part of the "Perspective - 2012" exercise, launches of the high-precision artillery 152-mm "Flower Garden" projectile were launched. It can be used against armored vehicles, as well as other well-protected objects, because this projectile is equipped with a laser homing system. As noted by the deputy head of the Central Research Institute of Arms and Military Equipment of the Armed Forces of Ukraine Igor Chepkov, the launches were carried out successfully, as evidenced by the defeat of the targets set from the first time. According to experts, the Ukrainian “Flower Garden” is in no way inferior to its foreign counterparts - to the American mine of the Kopperhead caliber 155 mm and Russian “Krasnopol”. At the same time, the Ukrainian projectile is much cheaper, so it is more accessible to equip the army. Also, it makes it possible to quite successfully compete in the international arms market.

In addition, there are other developments of high-precision ammunition, electromagnetic weapons, laser guns, communications equipment, thermal imagers, radar tools, UAVs. It is clear that for the success of such a fundamental development requires an impressive amount of money. But now it's not about that.

Currently, the Ukrainian army is testing new uniforms, more precisely, its experimental party. The whole kit is a prototype of how the soldiers will look in the future. Thus, the kit will include a combat helmet equipped with a night vision device and a micro video camera, a light bulletproof vest (splinterproof), a GPS receiver, a microcomputer with a monitor to which commands will be sent, a portable radio station, sensors for measuring body temperature, heart rate, pressure.

An important activity of the Ukrainian military-industrial complex is the production of unmanned aerial vehicles. In this case, the experience of other states, in particular, America, Israel, and France, which demonstrated the high efficiency of the use of UAVs, not only during combat operations, but also for receiving intelligence information, was very useful. In addition, the advantage of these devices is that there are no pilots on board. Thus, if the drone will even be shot down, it will not cause people to die.

As for the Ukrainian development of UAVs, several teams are engaged in them at once. Periodically, they present the results of their work at various exhibitions, but, as a rule, the matter does not go beyond that, because there is no money and it is not foreseen ...

I remember a few years ago, the military department acquired an Israeli-made drone for the Ukrainian army, not regretting paying more than six million dollars for it. But, as it turned out, this device was significantly inferior to the Ukrainian models, and besides, it had a number of flaws, so it did not find its use in the Ukrainian army. So the money went nowhere. Meanwhile, at the moment, three Ukrainian UAV models are being tested at one of the landfills. And immediately the question: why was it to throw away such money for utter nonsense, if it could be invested in domestic developments? But as they say, after a fight they do not wave their fists ...

A few words should be said about another development of the Ukrainian "defense". So, a certain time ago, the unique “Missing” anti-missile system was developed. Its main task was to deceive the enemy and divert its main forces aside in order to avoid a threat to its troops. Paradox, but now nobody even remembers this project. In the same way, as well as the created domestic analogue of the American car "Hammer" - the Step jeep. At the very beginning of development, in 2001, great hopes were placed on it ... Yes, and about the Vepr, an automatic weapon, which was intended to replace Kalashnikov assault rifles, it was also as if everyone had forgotten.

Some time ago, the possibility of strengthening the Ukrainian fleet American frigates "Oliver Perry", which the US military was ready to transfer to Ukraine. Of course, it was possible to accept them, but their maintenance and armament required such funds that were equal to almost half of the national state budget. Therefore, I had to refuse.

Currently in Ukraine at the stage of creation is its own corvette. In the future, four of them are planned. According to the military leadership, they must enhance the combat potential of the Ukrainian fleet. But, again, whether this program will be brought to its logical conclusion is unknown.

According to former defense minister Alexander Kuzmuk, in the first years of independence many weapons and equipment were relatively new, which could not but rejoice, because there was no need to invest large amounts in the development of the defense complex. In addition, this money was not much. But already then it was necessary to work for the future, because over time, the AME is aging not only physically, but also morally.

Actually, the negligence of managers has led to the well-known results: many enterprises of the military-industrial complex came to a complete decline, since the production facilities were not updated. Most qualified engineers and designers quit. Fortunately, now the situation is changing a little for the better, but in order to achieve some success, it is necessary to intervene by the state, creating a program for reanimation of the Ukrainian defense-industrial complex under his leadership.

But on the other hand, it turns out to be utter absurdity: after all, talented designers and engineers, who can help the Ukrainian defense industry rise, still remain in Ukraine. What is worth, for example, the creation on the basis of the American "Hummer" of the Ukrainian "Watch" or the completion of the same "Hummers" with weapons and necessary devices. But the problem also lies in the fact that it is almost impossible to promote their production into mass production.

Ukrainian weapons and military equipment in the army are already far behind world standards. This is indicated by the military themselves. In particular, those soldiers who are in Afghanistan as part of a peacekeeping mission, argue that the quality of uniforms and shoes leaves much to be desired, body armor too heavy, even compared to Lithuanian ones. Most peacekeeping missions completely changed their small arms, except, of course, the Ukrainians ...

Meanwhile, military experts say that there is no money from the state treasury in order to purchase new weapons and equipment, money for modernization and repair of what has been in service for many years is hardly available. The existence of the T-84, even in a single copy, helps to preserve tank school (the only question is how?). Many say that the Oplot is the most advanced tank, and that in the coming years it is unlikely that anything more effective will appear. But here is just the case when it is not about quality, but about quantity. How is it that a single tank, even a supernova, to ensure the security of the country, is not entirely clear ...

In addition, in the conditions of modern war, the emphasis is on high technology, so there is a real need to pay attention to promising cyber development, in particular, electromagnetic guns, air transport protection systems against missile strikes ...