Will the US cede Europe to Russia? ("The New York Times", USA) 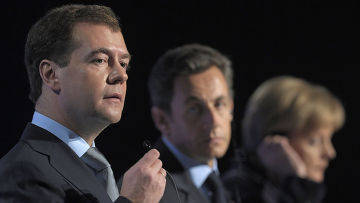 Previously, the United States returned wayward NATO members back to the stall with a whistle or a shout. They decided that it was a departure from the general doctrine, and this decision became law.

When the Obama administration started stomping their legs this time, no one stood up at attention.

On the contrary, Germany and France, having held a meeting with Russia in the north of France in Deauville last week, made it clear that they intend to turn such tripartite "parties on the side" on issues of international politics and security into a regular event. They even intend to invite other "partners" to them. According to diplomats from these two countries, Turkey may become a participant in such meetings in the future.

This is like trying to solve European security problems at a certain distance from NATO. It also looks like a ready-made recipe that will help Russia - and this is absolutely no news - set up European allies against the United States, as well as NATO against the European Union.

But there are other details in this theoretical apostasy from Euro-Atlantic solidarity. In June, Angela Merkel made a proposal for the European Union and Russia to create their own political and security committee; and President Nicolas Sarkozy voiced in Deauville the intention to create a common economic space between the EU and Russia with a “common security concept”.

And right on the eve of the meeting in Deauville, the Russian representative to the EU, Vladimir Chizhov, overtook the plans of Merkel / Sarkozy and told the reporter that Russia now wants to formalize its relations with the current EU foreign policy and security committee. “I don’t think I’ll be present at every committee meeting,” he said, “but some mechanism must be created to allow us to take joint steps.”

As for Obama’s stomped administration, it all came down to a statement by its high-ranking official who said, “Since what is interesting, then, European security doesn’t concern America, but is it an issue that Europe and Russia have to decide? center of European security, and now it's strange to hear that this is no longer the US’s concern. "

And what, followed by an explosion of sincere European repentance? I asked about this one official representative of Germany. He began to talk about the loyalty of Germany and France to NATO. He also said: "I understand that America has suspicions."

“However,” he continued, “the United States must come to terms with the fact that times change. There are examples. Why should America not agree with our point of view in this regard?”

This person did not specify this point of view, but there are quite obvious factors explaining the French and German initiatives.

The main factor is the apparent disinterest of President Barack Obama in Europe and the lack of common ground with her. The absence of Obama at a ceremony in Berlin in honor of the end of the Cold War, as well as his refusal to participate in a meeting with the new EU president, was quite symbolic in this regard.

At the same time, the American reset in relations with Russia and the administration’s readiness to treat President Dmitry Medvedev as a potential partner of the West gave the French and Germans the feeling that they could act in accordance with their own ideas about the changes taking place in Moscow.

According to such European ideas, the United States today substantially depends on Russia, which provides them with supply routes for troops in Afghanistan, and also hesitantly, but it increases pressure on Iran. And since the administration portrays the reset as an achievement of US foreign policy, Washington’s criticism of Russia is minimized.

Consider the following paradox. The more actively Russia puts forward as a condition for the deals needed by the French and / or the Germans (the example of the French proposal to supply Moscow’s Mistral landing ships is appropriate here), its participation in the EU-level security decision-making process, the stronger the impression that the administration Europeans are unloading their complaints about the current situation.

Here is an example. The US Permanent Representative to NATO, Ivo H. Daalder, made a speech last week in Paris. In it, he did not say a word about the Russian maneuvers, but he called it "very puzzling" and "very strange" the fact that "NATO does not have a real strategic partnership with the EU."

Very fair. On the other hand, Russia gets credits one by one. Ten days ago, Medvedev offered the head of Venezuela, Hugo Chavez, assistance in building the country's first nuclear power plant. The State Department expressed concern about the transfer of nuclear technologies to "countries that should not have such technologies" - but immediately added (puzzling many) that the relationship between Venezuela and Russia (a country that has provided Iran with nuclear materials and technologies for many years) "is not ours a business".

Last week, something similar happened in the same series. When Medvedev, at a ceremony in the Kremlin, presented high awards to a group of illegal intelligence officers expelled from the United States in July, a State Department spokesman declined to answer a journalist’s question about this with the words "no comment." Washington also prefers not to say anything about the fact that Medvedev supports President Sarkozy’s plan (he reiterated such support in Deauville), who next year will become the chairman of the G-20. This plan provides for reducing the role of the dollar as the world reserve currency.

After Deauville, the Americans preferred to applaud Medvedev’s decision to come to the NATO summit in Lisbon in November, which will take place after the elections to the US Congress. He is unlikely to announce the participation of Russia or its support for the US-proposed European missile defense system, which should strengthen the alliance’s supposedly inseparable transatlantic future. However, the appearance of the Russian president as a guest at the main NATO site can be viewed as an important signal about the beginning of genuine cooperation.

And yet, despite the concerns of Americans about Europe’s independent relations with Russia, the administration did not make a single public statement calling for careful and careful monitoring of Moscow’s attempts to sow the seeds of discord between NATO and the EU. According to the former high-ranking State Department official David J. Kramer, who was responsible for relations with Russia, the new circumstances show that "the Russians have much more than they need leverage over relations with the United States."

In such circumstances, quite unexpectedly, a statement was made by a source from the circle of the French president on the eve of the meeting in Deauville. He put a big question mark (more than Washington usually puts) alongside France’s desire to create "in the West a reliable basis" of "weak" signals about changes in Russia.

“We have no guarantees that these are permanent strategic changes,” a representative from the Elysée Palace said.