P. I. Engelhardt - a hero who died at the hands of the French invaders.

October 6 2012
8
Speaking about the Russian partisan movement, it is impossible not to mention Pavel Engelhardt, a man of noble noble origin and a true patriot of Russia.

Pavel Engelhardt was born in 1774 year in a noble family living in the Porechsky district of Smolensk province. He was brought up in the land Cadet Corps, from which he was released in the rank of lieutenant in 1787 and went on to serve in the Military Collegium. Engelhardt resigned as a lieutenant colonel and went to live on his family estate, Dyagilevo, Smolensk Province. 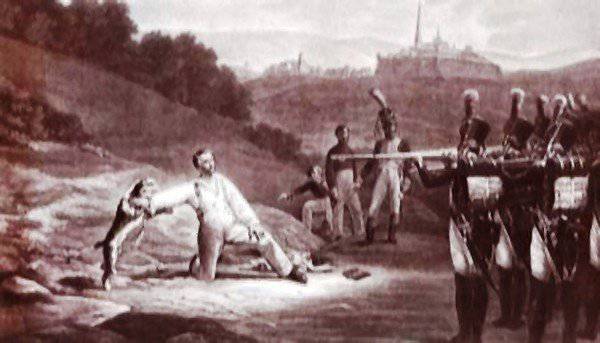 During the French occupation of Russia in 1812, when the Napoleon captured Smolensk, Pavel Ivanovich together with several other landowners armed their peasants (and this, at least, 78 people of his yard people), organizing a partisan popular detachment. Engelhardt’s squad, skillfully led by them, inflicted quite serious damage to the enemy, robbing French carts and attacking certain groups of French who were looting throughout the county. According to eyewitnesses, Engelhardt himself had 24 killed French soldiers.

However, yielding to the French promises to release from serfdom and the acquisition of their own land in the event of the victory of Napoleon, the peasants betrayed Pavel Ivanovich, betraying him to the enemy.

Arrested Engelhardt before the trial was kept in the Spasskaya fortress in Smolensk. A French military court sentenced Pavel Engelhardt of 3 on October 12 to the execution - “to execution”.

After the sentence was passed, the French delayed for about two weeks more with its execution, in every possible way inclining the partisan hero to serve in the Napoleonic army, but Engelhardt was adamant - it was unbecoming for a Russian to betray his Motherland.

The details of his shooting, which happened on October 15, are known to us from a letter to his wife, father Nikifor, who confessed Pavel Engelhardt before his death and accompanied him to the place of execution at the Molokhovsky gates of the Smolensk fortress wall.

Here is what he writes: “He was calm all day and talked with a cheerful spirit about the death, appointed by fate, ... - Behind the Molokhovsky gates, in trenches, they began to read him the sentence, but he did not let them finish reading, shouted in French:“ lie completely, it's time to stop. Charge quickly and fall! Not to see more ruin of my fatherland and oppression of my compatriots ”. They began to blindfold him, but he did not allow him, saying: “Get out! No one saw his death, and I will see it. ” Then he briefly prayed and ordered to shoot.

The French here did not want to retreat from their plans, having shot Pavel Ivanovich’s leg, they promised to cure him if Engelgardt agreed to go to their side. And just get the final rejection, a volley of 18 charges was given, three of which pierced the body of the unfortunate hero. The final shot at the temple did away with the painful wounds of Pavel Engelhardt.

The mention of the exploit of Pavel Ivanovich Engelhardt is immortalized on a memorial plaque of one of the churches of the 1-th Cadet Corps, where this deserving memory of people once studied.

Noteworthy also история with another monument to Engelhardt. A widow of Pavel Ivanovich erected a modest monument at the place of his execution on the south side of the Smolensk Wall.

In 1833, the Russian emperor Nicholas I, already leaving the city, noticed this dilapidated monument and ordered the installation of a new monument.

The monument was cast from cast iron at the Aleksandrovsky Foundry and installed in the same place (after 1917, it was dismantled and disappeared in a hard time). The inscription was engraved on that monument: “Lieutenant Colonel Pavel Ivanovich Engelhardt, who died in 1812 for his loyalty and love for the Tsar and the Fatherland,” to which it is unnecessary to add anything. 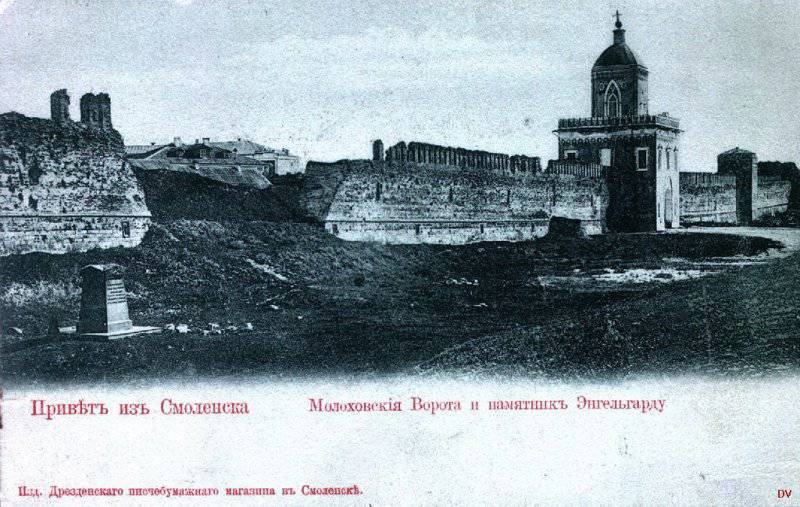