The crisis of the armed forces of Russia: Medvedev and the General Staff enter into a skirmish ('The Jamestown Foundation', USA) 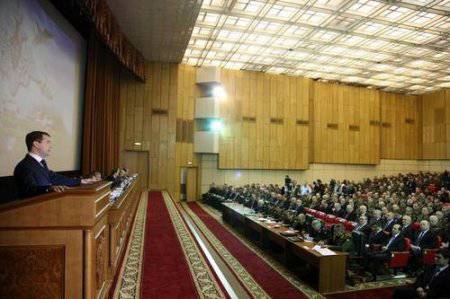 It was officially recognized that the Russian military faced a serious personnel crisis: the federal program for hiring more soldiers on a contract basis failed, and their number would be reduced from 150 thousand to 90 thousand, while massive draft evasion and demographic problems lead to a reduction in the number of draftees (EDM, April 29). Last week, Colonel-General Vasily Smirnov, head of the Main Organizational-Mobilization Directorate (GOMU) of the General Staff, told the Defense Committee of the Federation Council that the situation was serious. He said that this year GOMU may not gather enough recruits to join the ranks of the military units of the Ministry of Defense and the Ministry of the Interior. The General Staff believes that the number of draft defaulters in Russia today is 200 thousands. Smirnov proposes draconian measures to increase recruitment and punish draft dodgers. Russian men between the ages of 18 and 27 are to be called in, but Smirnov has announced plans to increase the age limit to 30 years. Smirnov also suggested calling university and college students for one year after one or two years of study (Interfax, April 29).

GOMU hoped to join the ranks of university and college graduates born during the 1980's baby boom. This policy was only partially successful: thousands of more educated and wealthy citizens do not want to spend time in the barracks, and instead evade conscription (EDM, April 29). Smirnov clearly wants to increase pressure on this social group by increasing the age limit to 30 years. Extending the call to 30 years may allow GOMU to extend the “use” of the 1980 baby boom for three years.

Currently, most university and college students receive a deferment until they complete their studies. To be called upon, graduates must receive a document on the need to appear on the call. Currently, the main tactic of evading service in Russia is to move to a rented apartment, which the authorities are not aware of, in order to avoid being served this document. As a countermeasure, Smirnov proposed to introduce an electronic call by SMS (mostly young Russians with mobile ones), and also to effectively cancel deferments during education by calling students, which is technically much easier while they (unlike graduates) are connected to universities, who report their presence to the authorities (Interfax, April 29).

The plans recently announced by Defense Minister Anatoly Serdyukov to “humanize” military service in Russia were largely welcomed by human rights activists (EDM, April 29). Smirnov’s draconian proposals on increasing the draft age were met with indignation. Smirnov was accused of confronting Serdyukov’s plans for military reform and the intention to "modernize Russia" announced by President Dmitry Medvedev. The executive secretary of the Russian Union of Soldiers ’Mothers Committees, Valentina Melnikova, who publicly supported Serdyukov’s military“ humanization ”, called Smirnov’s proposals“ insane ”and“ violating the law ”. Melnikova told reporters that there could be a “rebellion in the Ministry of Defense” (Interfax, April 29).

Of course, Smirnov is a quiet military bureaucrat without direct command communication with any combat units, and he is hardly a rebel. It may seem that while Serdyukov offered the Russian public a carrot to make military service more humane and attractive, Smirnov showed a stick to intimidate and force potential recruits to join it. The statements of Serdyukov and Smirnov can be coordinated.

This week, Dmitry Medvedev joined the discussion while visiting with the Serdyukov 5 Guards Taman separate motorized rifle brigade. For many decades, the Taman (2009-I Guards Motorized Rifle Division) was a special unit, based near Moscow, to protect the Russian leadership from potential internal unrest or a sudden attack by US troops on the Moscow region to decapitate the country, considered possible during the Cold War. Taman is an illustrative unit with the best food and barracks for foreign guests and journalists, as well as for Russian leaders visiting the unit to see the positive side of the Russian army.

Serdyukov said that in Taman the food is already being prepared by civilians, and that soon the territory will also be cleaned by civilian contractors. He promised that within three months Tamansk recruits would be allowed “as an experiment” to have a five-day working week and go home for the weekend (RIA News, 5 May).

Medvedev, in the presence of journalists, drank tea with newly recruited conscripts who expressed satisfaction with the conditions of service. Medvedev told the soldiers (in the presence of the cameras) to tell their friends that they should not be afraid of the army: “A call to service should not be viewed as some kind of personal catastrophe.” Medvedev acknowledged “problems” with the conscription, but promised that the conscription service would not be extended: “One year is enough to train a good qualified specialist - a soldier or a sergeant”. Medvedev admitted that in 2009, there was a crisis with the recruitment of contract soldiers, and in part there would be fewer, ”but by the fall it will be decided how many contract soldiers Russia needs and how much to pay. Medvedev promised that the excellent conditions of service in the Taman "experimental" brigade will be extended to the entire army (Interfax, May 5). Medvedev has clearly joined Serdyukov in his desire to convince those who evade the army to join the service, but he avoided commenting on Smirnov’s harsh proposals, which seems to indicate that they were approved.

If the Russian authorities managed to avoid a personnel crisis that could lead to a shortage of “permanent readiness units” and a low level of readiness in the next year or two, this only confirms the temporary nature of the decision. Russia has one million permanent armed forces. The number of officers was reduced to 150 000, and contract soldiers to 90 000 people. The troops of the Ministry of the Interior each year need tens of thousands of draftees. With one-year service, Russia needs more than 600 000 recruits per year - up to 2025 year, when there will be only about 400 000 new 18-year-old men suitable for military service annually. The reserve of students (if they plug the gap) will soon be exhausted. It may seem that Medvedev and Serdyukov are mainly making great efforts to avoid the inevitable crisis before the presidential election in 2012, and to make an unpopular decision to double the length of military service on conscription. In addition, all Russian military forces should be halved in size. In any case, combat units consisting only of soldiers with a one-year service life cannot be fully operational. It is also impossible to select and train a "good sergeant" in one year, although Medvedev may be convinced of the opposite.