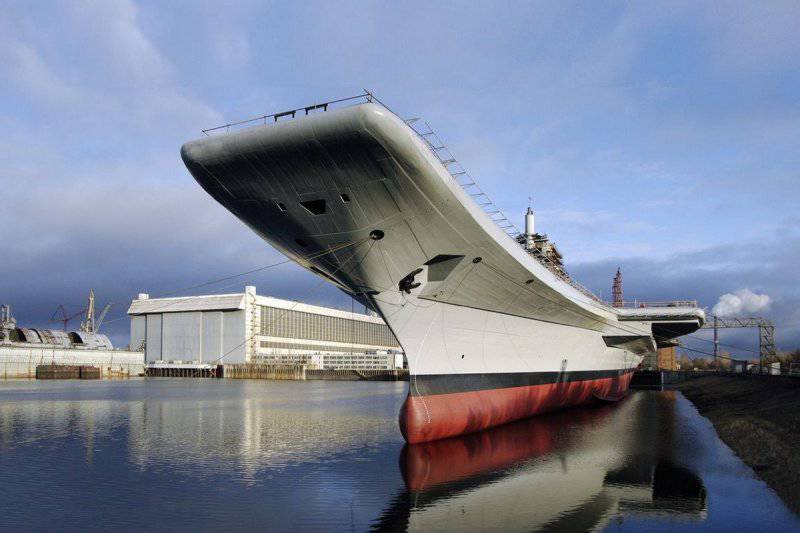 The running tests of the Vikramaditya ship of the Indian Navy in Russia, which caused conflicting opinions and initially called an annoying failure, are in fact an obvious success, and the problems with the power plant that the ship experienced during the tests are not even close as serious as it is reported in the media. About this Indian writes The Hindu.

After returning the ship to Sevmash a week ago, the Indian Navy Observation Team, which closely followed the sea trials, concluded that, on the whole, the ship showed itself exceptionally well and the testing program was largely completed.

The test results were analyzed, and the issues that need to be improved are reflected in the protocol signed by Vice-Admiral Nadella Niranjan Kumar, Head of the Administration for the Production and Purchasing of Warships.

The main result of the sea trials that took place was the fact that the ship of the Navy of India "Vikramaditya", converted from the cruiser "Admiral Gorshkov", who had on board both aircraft and missiles, passed the tests and became a full-fledged highly efficient aircraft carrier. The ship showed excellent seaworthiness and maneuverability and worked flawlessly during takeoffs and landings. Complex electronic, navigation equipment and other systems of the ship showed their high efficiency and reliability.

Malfunction of the boilers identified during the tests of the ship for the development of full speed, will not entail their replacement or dismantling. The problem boils down to the need to replace the insulating lining, which is located between the steel body of the boiler and the brickwork. At the request of Indian specialists, the Russian side refused to use the traditional asbestos-containing material, and the new material was slightly deformed while the ship was in full swing, which led to a partial collapse of the brickwork. Currently, the Indian side has agreed to the use of asbestos cardboard.

The problem with the boilers did not prevent Vikramadity from completing the tests. Informed sources told The Hindu that the officers of the Indian Navy were particularly impressed with the flight program. The 4 ++ generation MiG-29K and MiG-29KUB fighters performed the 41 flawless take-off and landing with a full combat load and outboard fuel tanks. The joint work of optical and electronic landing systems of Russian and Indian production allowed Russian pilots to capture the second of the three airborne landing gear cables in 70 percent of cases, which is considered an excellent result.

The ship with a displacement of 44 KT also demonstrated excellent maneuverability, describing the circulation at 18 speeds in 360 degrees with a minimum radius equal to the length of one and a half hulls.

In addition to faults with boilers, defects were also found in some other equipment installed at the insistence of the Indian side, such as refrigeration units, nitrogen generators and compressors manufactured in Germany, England, Poland and India itself.

According to sources, Russian shipbuilders promised to complete all repair work before next year, but given that preliminary tests in the White Sea can begin only at the end of May, when the ice melts, the Vikramaditya will be handed over to the Indian Navy not earlier than next fall.