Armored personnel carriers for the competition under the American program Mrs

October 4 2012
13
The magazine "Jane's International Defense Review" in the article "Details emerge on competitors for the USMC's Marine Personnel Carrier" reports that at the "Modern Day Marine" annual exhibition and conference of the United States Marine Corps (IOM) held on 25 on 27 in September Quantico (Virginia) was released a new information about the development of the competition of the USMC on the new wheeled armored personnel carrier program of the Marine Personnel Carrier (MPC), as well as presented prototypes of two vehicles participating in the competition.


The MPC program currently provides for the purchase of the 579 "medium" floating armored personnel carriers with the 8x8 wheel formula for the KMP with the achievement of the initial operational readiness stage in the 2018 year. It is assumed that each battalion of the Marine Corps will have one company equipped with MPC machines. It should be noted that the MPC program is not an alternative, but complementary to the acquisition programs of the Expeditionary Fighting Vehicle (EFV) promising amphibious combat vehicle, and after canceling the latter, the Amphibious Combat Vehicle (ACV), adopted for EFV, instead of the EFV. replacement of the now-operated tracked amphibious AAV. The KMP requirements for the MPC machine include enhanced minefield protection, combat weight in the range from 20,4 to 25 tons, maximum speed on the water of at least 6 nodes, and on land - 65 miles per hour. 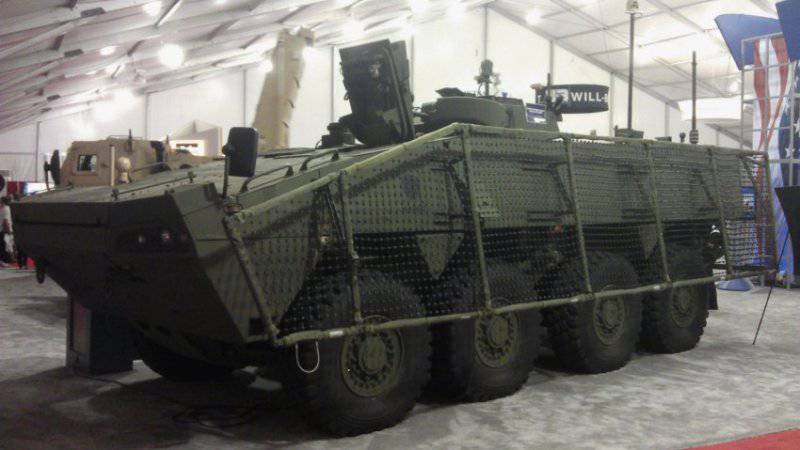 The prototype of the proposed US Marine Corps competition for the Marine Personnel Carrier (MPC) program by Lockheed Martin Corporation of the Havoc armored personnel carrier, which is a variant of the Patria AMV vehicle. Quantico, exposition of "Modern Day Marine". 25.09.2012 (c) Dan Wasserbly / Jane's

In August-September 2012, the ILC issued contracts for 3,5 million dollars each to four IFAs participating bidding companies - Lockheed Martin, BAE Systems, General Dynamics Land Systems (GDLS) and SAIC - for the construction and conduct of an initial stage of assessment tests on one copy of the machines they offer. Under the terms of the issued contracts, each company must deliver a complete prototype for testing at the Amphibious Vehicle Test Branch at Camp Pendleton in March-April 2013, as well as two armored cases for carrying out tests for explosive resistance at the Nevada Automotive Test Center in Carson City (Nevada).

The Lockheed Martin Corporation, in partnership with the Finnish Patria Land Systems, offers the Havoc vehicle for the MRS competition, a modification of the Patria AMV (Armored Modular Vehicle) armored personnel carrier. The prototype Havoc, manufactured according to the requirements of the ILC, was demonstrated in the exhibition "Modern Day Marine". The article notes that Havoc does not have a V-shaped hull bottom, but with the aim of increasing the level of mine protection it is equipped with a special “subframe” ('subframe') of the hull. The machine also has a reinforced floor and shockproof seats. Although the KMP has not yet made a decision on the type of armament of the MLSs, the prototype of the Havoc is equipped with a turret with an 12,7-mm machine gun and an 40-mm automatic grenade launcher, similar to the AAV used on the KMP.

In turn, BAE Systems has teamed up with the Italian Iveco, offering to the MRS competition a modification of the new BTR Iveco SUPERAV. A prototype machine based on the SUPERAV for MRS was also presented at the "Modern Day Marine" exposition. The prototype is equipped with a Kongsberg CROWS remote-controlled turret with an 12,7-mm machine gun. BAE Systems declares the machine’s “mine protection of the hull and seats” without disclosing details.

Two other competing firms were not represented at Modern Day Marine. GDLS is considered to offer a version of its Piranha family car to the IFA competition, while SAIC, in partnership with Singaporean ST Kinetics, offers the latest TERREX BTR. 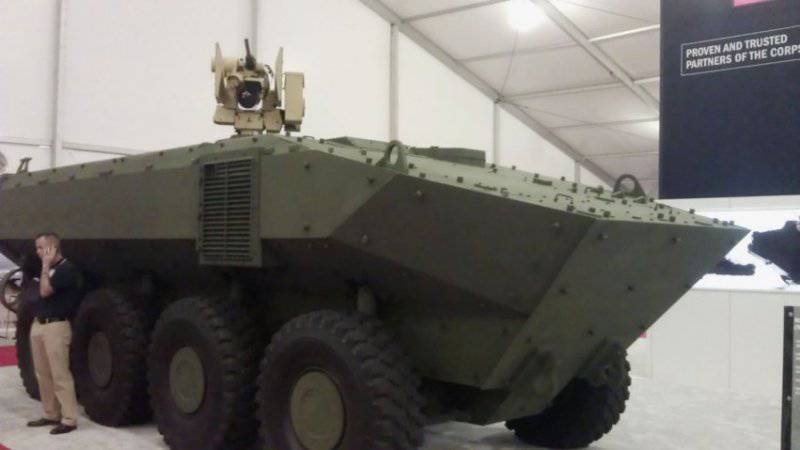 We are in Yandex Zen
Tightening belts. US Marine Corps Projects Have Foggy Prospects
Shipping to Shore (Development of a new vehicle for the US Marine Corps)
13 comments
Information
Dear reader, to leave comments on the publication, you must to register.