About TT pistol and "plagiarism" in weapons

October 4 2012
33
Already several times he came across in comments to articles on such an unpleasant moment as a comparison of a TT pistol with Browning pistols, and the emphasis in such comparisons is that Tokarev copied his pistol, removing some elements from it. Despite all my respect for Browning, the Russian gunsmith is also worthy of being noted as one of the greatest stories firearms weaponstherefore I will try to explain in detail what the similarities with the TT of individual models are, and what the difference is. I hope that this article will clarify many points, and the resource will no longer meet the message with the words "copied", "plagiarism" and so on, after all this is a very strong insult for the designer, and just a person who did a lot for the development of domestic weapons, and the more that is not alive. Three models were chosen for comparison: the TT itself, the M1903 Browning pistol and also the Browning pistol, but with the name Colt M1911, which people usually try to draw analogies with until the end of it and TT. Go! 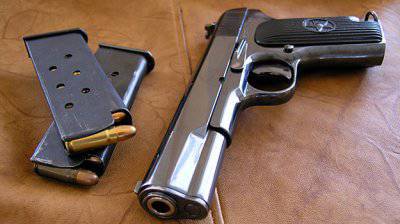 Let's start with the Browning pistol model 1903 of the year. If you look at this weapon in comparison with a TT pistol, then it is impossible not to notice a very, very strong external similarity. It is this superficial examination of the weapon that gave rise to the opinion of the people about the full identity of the pistols, the M1903 even has a fuse, due to which it looks more attractive in comparison with the TT. In principle, there is nothing surprising in the fact that they draw analogies between two fundamentally different samples of pistols (I’m running ahead), because the easiest way is simply to look at one picture, at the other, and say, “So the knife is identical!”. It is much more difficult to at least run through the text with a description of the weapon and find lines that say that, despite all the external similarity, the weapon is built with different automation systems, that is, completely different in everything except appearance and that TT, and M1903 - pistols. But let's start with the external differences. As already noted above, the M1903 has an automatic fuse switch, as well as an automatic safety key on the back side of the weapon grip, this is of course not found in the TT. In addition, the M1903 trigger is hidden, although you can find some instances with an external trigger, but very few of them. Different weapons and the method of implementation of the slide delay, and the shape of the handle, and so on. Now let's look inside the pistols, and you can even whistle what they see, because if the external weapon is similar, then inside you can not find anything at all in common. 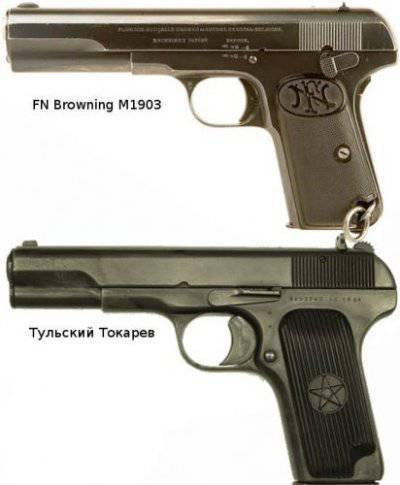 First of all, it should be noted that the M1903 is built according to the automatic scheme with a free stroke of the shutter, while in the automatic equipment the TT is built according to the scheme with a short stroke of the weapon. The trigger mechanism of a single-action pistol, which, subject to the presence of a hidden trigger and the inability of its smooth descent, makes the weapon not entirely safe to handle, but this is offset by the presence of safety devices, so that, in general, the weapon fully meets the safety requirements. If you look closely at the image of the gun, you can see a cutout on the casing-shutter, the purpose of which is not entirely clear. This cutout is designed to facilitate the disassembly of the weapon. The fact is that the barrel of the pistol is removable, and it is this part that keeps the cover-shutter from moving forward for complete removal. So, in order to disassemble the weapon, it is necessary to delay the casing-bolt all the way back, use the fuse switch to fix it and turn the barrel. After that, remove the shutter-casing from fixation and, holding it with a hand, remove the weapon with the barrel from the frame, after which the barrel can be separated completely. Such an original design is both a positive and a negative quality of the weapon, as an easy change of the barrel allows you to replace the worn out with a new one very quickly and even “on the knee”, but for service this feature is clearly negative. Due to its simplicity and reliability, this pistol was in service with many countries, plus the 9x20 cartridge was used in it, which was relatively effective at that time, but at the same time rare enough, which slowed down, but did not stop the spread of weapons. These pistols also got into the Russian Empire, but in very limited quantities to arm the Metropolitan Police.

So, it’s clear that this pistol can’t even claim to be even a little like the TT, since these are really two completely different types of short-barreled weapons. Well, the external similarity can be explained by the fact that Tokarev probably liked the appearance of the weapon, or it was a “request” from above, as well as the removal of the automatic fuse that was present in the original design of the TT pistol. In addition, there is an unconfirmed rumor that Tokarev was trained in Belgium, which I personally believe with difficulty, and most likely this rumor stems from the fact that many people consider Tokarev’s pistol and the aforementioned Browning pistols to be completely identical. In general, 50% of the myth has been dispelled, another 50 are left, but they will be the most difficult, since not everyone will agree with me further and will have to give examples when there were similar situations in the arms history, and no one even thought to call it imitation, and even more plagiarized. 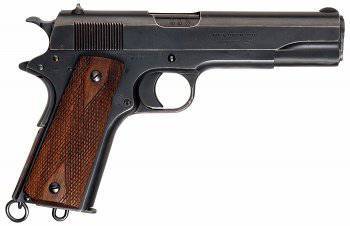 When comparing the TT with the Colt M1911 (for comparison, the Colt M1911 will be taken under the .38 ammunition) really have to sweat to defend their point of view. The fact is that the weapon is built according to the same automation scheme and is minimal for two pistols. And one could really talk about the complete similarity of weapons, if not for a few “buts”. First of all, it should be noted that the TT uses a completely different ammunition, and this already makes the weapon different in characteristics. But even if you do not take into account the characteristics of the pistols, then simply adapting the pistol for a new cartridge is already quite a serious job, as you say, I don’t need to fill my fur coat with my pants. Well, okay, let's leave the question of the difference in ammunition. In addition, there are many other differences in the two weapon models. So first of all, the absence of devices protecting TTs from accidental firing is striking, except for the safety trigger cocking, but here we can say that there is nothing difficult to remove from the design of this all. Much more interesting is the difference in the trigger mechanism, which is made in the TT! Separate removable unit! which is not the Colt M1911. It seems that there seems to be no big difference, but this is not at all the case; a completely redesigned trigger mechanism is a significant part of the weapon as a whole, which greatly influences the final result. Something like that. 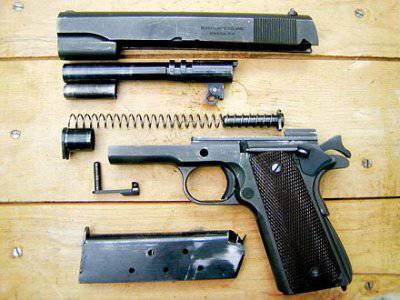 Thus, it is permissible to say that Tokarev took Browning's development as a basis and adapted them to other requirements, improving in some way, worsening in some way, but is it worth calling it plagiarism? For example, take one of my favorite cases in gun history. Everyone knows that 80 percent of pistols are currently made according to the Browning scheme, which has been modernized to one degree or another. This also includes a scheme with a short barrel stroke, where locking occurs by means of a protrusion above the chamber and a window for ejection of spent cartridges. So, Browning developed a pistol with precisely this scheme of automatic operation, already without locking individual parts, although this weapon went into series only after his death. And there already Glocks and SIGs pulled themselves up. But if you move a little back on the timeline, you can see that exactly the same scheme was used by Webley & Scott in 1908, which began developing its pistol, and in 1910 it was already produced. Now I will explain what happened. Webley & Scott modified the scheme of operation of Browning automatics, significantly simplifying it, and subsequently, many years later, Browning used the scheme modernized by Webley & Scott. Well, tell me now, who, from whom and where did you steal what?

To talk about plagiarism in the world of weapons is, of course, a very interesting matter, but one should not forget that even completely identical samples in terms of their structure can differ radically in characteristics due to the ammunition used, because of the difference in quality and method of processing parts and so on and so on and so on. However, this does not mean that, having made a minor modification of any scheme of work, the manufacturer has the right to shout that he has made a revolution in the world of weapons, but this is a little from another opera. Actually, there are not so many schemes of operation of the automatic, options for trigger mechanisms, devices for protection against accidental firing are also far from infinite, add to this a “game” with coatings of parts and materials from which they are made, and we get a very small number of different options for weapons in which it will all be combined. But everyone wants to make money, someone attracts the attention of customers with an already earned name, someone with very high quality, someone with a weapon, and someone with low prices, as a result there are no completely identical samples, even if the weapon is made as a copy under license from the copyright holder. Here is the illegal copying of weapons by small groups of national craftsmen - yes, this is plagiarism, although in no way will the weapon be the same as the original one, by the way, it is not always the difference for the worse, sometimes vice versa. The work of a gunsmith is akin to the work of a composer. One has a limited supply of solutions and a very rare case when there is something new worthy, and the other has a limited supply of notes, new ones, unfortunately, also cannot be invented. So you have to twist, composing, using "chords" and debugging the "game technique". In general, the next time you look at two identical weapons in your opinion, remember that no one blames the composer for using the same notes as his colleagues.