The Central Asian question is an edge 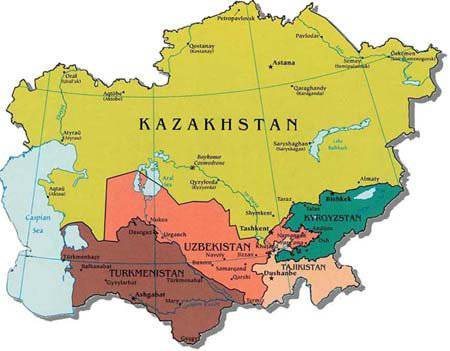 On October 5, Vladimir Putin will fly to Dushanbe and meet with Emomali Rahmon. The two presidents plan to discuss, as they say in the official language, issues of bilateral cooperation.

The question of such plucked up there are many: here there is economy, contacts in the field of security, and the topic of interaction in integration associations, as well as various regional problems.

The central point of the Tajik-Russian talks to be held in Dushanbe will be the possible signing of an agreement on extending the tenure of the 201 Russian military base in Tajikistan.

Also, representatives of Dushanbe are very concerned about the economic component of Comrade Putin’s visit to fraternal Tajikistan. Now the Russian-Tajik working group is finishing work on a document designed to put an end to the discussion of duty-free imports of fuel and lubricants into the republic. After all, if earlier the share of the Russian Federation had to about 90% of fuel imports, then in the first half of 2012, this figure fell to 62%. The very question of the abolition of duties on imports of fuels and lubricants between the two countries has been discussed for a long time, since the 2010 year.

The most important issue is the growth of mutual trade and investment in Russia in the implementation of energy projects in Tajikistan. Putin-this is not Yeltsin, who did not know how Russian Tanks came to Yugoslavia, and he, of course, is aware that over the 8 months of 2012, trade between Tajikistan and Russia decreased by 3% compared to the same period last year. Comrade Rahmon also knows about this.

Tajikistan, like Kyrgyzstan, can become Russia's military-energy ally. If Dushanbe joins Russia and Kyrgyzstan, then Moscow will complete the Rogun hydropower station. This means, many analysts believe, that the Kremlin for the first time did in Central Asia, there is a certain choice: after all, speaking on the side of Kyrgyzstan and Tajikistan and promising them water, Moscow opposes the Uzbeks, who do not approve the construction of hydropower plants without the permission of international experts.

“Water resources can become a problem around which relations in the Central Asian region will worsen,” сказал recently Islam Karimov (being not in Kirghizia or Tajikistan, but in Kazakhstan). “Everything can be aggravated so much that it can cause not just a religious confrontation, but war.”

The President of Uzbekistan called on Kazakhstan as an ally because, firstly, Kazakhstan is a strong country with mineral resources and also claiming a central role in the region, and the crow does not peck out the crow, and secondly, because: "" Uzbeks and Kazakhs live along the Syrdarya runoff for centuries. And from this point of view, we cannot be silent today when some plans arise that are decided without being interested at all, but what situation will we find tomorrow ”(Karimov’s words).

Karimov is dissatisfied with both the construction of the Rogun hydropower plant in Tajikistan and the Kambarata hydropower plant in Kyrgyzstan. He believes that these two water projects will create a water shortage in Central Asia, more precisely, they will take some water from the Uzbeks and Kazakhs. And they already lack.

And you cannot say that it is not objective. President of Uzbekistan, his concern explained: “The situation is further aggravated by the fact that in the area of ​​the construction of the Kambar-Ata hydroelectric station and the Rogun hydropower station, the tectonic fault is undergoing This is recognized by all seismologists of the world. Even recently, American seismologists in the state of Nevada decided that these tectonic faults are very serious. ” Karimov is afraid that the dam could break through. He believes that they are needed: first, international expertise, and, secondly, the consent of all countries living in the floodplains of two rivers. Moreover, the average annual need of Kazakhstan and Uzbekistan for water is satisfied by 70-75%, and if the Russians erect dams, how many percent will remain there?

Karimov’s concerns are understandable, but it’s probably also understandable for Russia that it’s quite difficult to reach any such international agreement with those entering and exiting the CSTO as if it’s a passing courtyard. The very reference to seismologists from the state of Nevada says that that the wolf in the forest looks that Karimov is looking towards America. Therefore, pressure is needed - and it is achieved through agreements with Kyrgyzstan and Tajikistan.

Kyrgyzstan in the water issue, Russia is already behind, Tajikistan remained. "For the first time in post-Soviet 20 years, Moscow made a choice in the water and energy dispute of the countries of Central Asia, - пишет Alexander Shakhnazarov. “This is exactly how the September agreement on Russia's participation in the construction of the Kambarata hydropower plant cascade on the Naryn River in Kyrgyzstan, whose waters in the lower course go to Uzbekistan, is interpreted. A similar agreement can be signed by Putin in Dushanbe, and then the ball will be on the side of Tashkent. If they decide to reinforce the regional leader’s ambitions with the US military base, the subcontinent will split into two opposing coalitions. If the Uzbeks agree to share in the hydropower project, Central Asia will be transformed. ” Its former transformation took place in the Soviet era: “... the problem of the water-energy imbalance of the republics of Central Asia was solved quite simply. In the summer months, rivers flowed from the mountains of Kyrgyzstan and Tajikistan, rotating turbines of hydroelectric power plants. This gave the mountain republics cheap electricity, and flatland dry Uzbekistan - water for irrigation. And in winter, the discharge of mountain rivers fell and then the lack of electricity to the neighbors was compensated by Uzbekistan, whose thermal power plants operated on their own gas. ”

But then there was Gorbachev, behind him - Yeltsin, the republics became “free”, instead of the USSR a bastard of the CIS was born. Over the years, Uzbekistan has learned to trump its blue fuel, on which the Tajiks depended, to put pressure on Russian Gazprom and even make friends with distant and close America. Today Tashkent knows how to make it clear to the neighbors who it is and who the neighbors are.

For example, 1 of April “joked” Uzbekistan: he took and shut off the gas valve to Tajikistan, and answering the following questions, he said that the most important thing for Tashkent was to supply gas not to the Tajik, but to the Chinese. An unexpected joke dragged on: gas supply to Tajikistan was resumed only on the night of April 16.

If Uzbekistan fears that there will be something wrong with hydropower plants, isn’t it better to establish good relations with its neighbors instead of friendship with America? The threats of the gas blockade, and even more so the war over water resources, are not only not the best argument in the dispute, but also not a dispute at all, but something else, which is extremely harmful for partnerships.

April Fool's gas valve overlap to Tajikistan is the second in 2012 year. The first took place in January - also, by the way, “sharp”, without any prior warning. The owner blocked the tap, and the point.

The Tajiks could find a way out of the energy impasse, and at the same time overcome the total dependence on Uzbekistan by building the Rogun hydropower station on the Vakhsh. That's what about it пишет Peter Bologov: “But even here the Uzbeks intervened - since the 2009 year, trains with cargoes for the construction of the station are constantly delayed on Uzbek territory. In Tashkent, they say that the construction of hydropower plants will lead to a decrease in the flow of the Amudarya and a decrease in the amount of water needed by the republic for agricultural needs. They are also threatening an environmental catastrophe, while ignoring the fact that, unlike Kazakhstan, Uzbekistan has forgotten to think about the fate of the Aral Sea, allowing its remnants to finally disappear into the desert. ”

The same Bologov tells about the border relations of Tajikistan and Uzbekistan: on the border fields of the last year since 1999, mines have been laid, on which Tajiks are undermined. In Tajikistan, “spy” hysteria is growing: from time to time one Uzbek spy of Tajik nationality is imprisoned on 13, then another on 18. The Uzbeks, in response, also “sew” spy cases with 14 and 20 terms. Who is bigger?..

As for the construction of hydropower plants, Karimov seems to exaggerate the danger and even inflates. For example, Nusrat Rakhmat (Uzbek), wrote an open letter to the presidents of Uzbekistan and Tajikistan; at the same time it appeared on the Internet. Quote from it: “And about the Rogun hydropower station I have my own point of view. I propose to reduce the height of the dam by at least 50 meters. I think the savings will be enough for the construction of another small hydroelectric station. We have to admit that in Uzbekistan some “scientists” too exaggerate its inexpediency and danger. Even in regional and district newspapers, satirical journals they began to illiterately criticize the project of this hydropower station, although it was designed in Tashkent. I personally disagree with some authors who write that there is a huge supply of salts under the hydroelectric station, and they seem to dissolve, or that the earthquake source is just under Rogun ”.

Well, “Nevada seismologists”, we add from ourselves, is a separate song. American

The question now is how Uzbekistan will respond to Russia, Kyrgyzstan and Tajikistan. They say that they will really be preparing for total non-friendship, that is, they will host American military bases. But maybe Karimov will come to his senses - and instead of hostility with neighbors he will admit that he is wrong and will make a compromise? The united nations are indeed a force, and the American bases have not united anyone yet. Here Atambayev, the Kyrgyz president, has already made a promise to withdraw the Americans from Manas to 2014 year. And Karimov suspended membership in the CSTO. One, therefore, is striving for rapprochement with Russia, which has finally outlined Central Asian priorities, and the second - is seeking from Russia.

“If two coalitions finally take shape in the region, Russia and Kyrgyzstan against Uzbekistan and the United States, military confrontation is inevitable,” пишет Alexander Shakhnazarov. - In fact, the blocks are already being formed, and between them an active and very hot diplomatic game will begin in the near future ... Considering that October’s visit of the Russian president to Dushanbe is expected, it is very likely that Tajikistan, whose interests in water energy dispute coincide with the Kyrgyz ". As a result: “If Putin’s visit to Dushanbe resolves two major contentious issues with Tajikistan, we can say that Uzbekistan will be in regional isolation - even the prospect of building two large dams on the largest transboundary rivers will give the Kyrgyz and Tajik leadership the strongest levers pressure on Uzbekistan. At the same time, the security of both countries will be guaranteed by Russia and its military presence. ”

In the coming days, willy-nilly, I. Karimov - against the backdrop of the current relatively neutral attitude of Kazakhstan towards Russian economic and political initiatives - will have to make difficult choices.

Russia's “hydropower” pressure on Mr. Karimov could be the peaceful key to Central Asia. This is not even about the Eurasian Union, but for the beginning about the normalization of relations between Uzbekistan and its neighbors - under the auspices and patronage of Russia. And this is in our difficult time - with its “double standards” and skillful propaganda of the right of the strong against the background of mass consumerism - already very much. You cannot build an economy on renting military bases. Another thing - energy. So let's live together, eh?