The Pyramid of Economics and the Return of the Stone Age 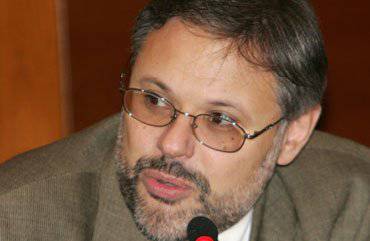 The question of why Adam Smith decided that the level of the division of labor from some level can no longer go deeper for a closed market is of fundamental importance today. It’s not even our theory, after all, we’re not absolute geniuses, we can be wrong! But the conclusion that the modern world has plunged into a crisis from which there is no way out is too important to be ignored. So, we will try to speculate on the topic of Adam Smith’s conclusion once more.

Imagine a small farm in which only a few families live. Well, let's say, those who had escaped in the XIII century beyond the Urals and who founded the new settlement of the former Novgorodians there. Question: Can they have a blacksmith in the village? The answer is, in general, obvious. This can not be, because such a mini-village is simply not possible to feed him. No, someone may be more adept in working with iron, someone less, of course, they help each other, but they cannot afford a “clean” blacksmith - the increase in labor productivity for such a small system from quality work with iron too small to feed him for a year.

A completely different situation begins when the number of refugees grows and the number of families in the village becomes several dozen. The amount of arable land is growing, and a good plow becomes a serious help, and given the amount of work the village becomes profitable to acquire its own blacksmith. As soon as this happens, the rest of the workers who no longer have to work with the metal are released - and their productivity also increases.

At the same time, the blacksmith cannot deal with all sorts of nonsense. For example, he will not make bikes. And because it is too difficult for him (and the quality of steel, and processing, and some other things, such as rubber for tires, are too complicated for him), and because a sufficient surplus product is not created in the village to feed him and his family while he is developing toys.

Now imagine that in the village a collective farm was formed or a fist bought up all the land and made the inhabitants his farm laborers. It is already profitable for him to cultivate the land with a tractor, although it is impossible to make a tractor in the village. That is - here the level of division of labor is limited by the scale of the system. But if you go beyond it and, for example, get a tractor in leasing or from the state, its use dramatically increases labor productivity and creates a lot of problems. In particular, a significant part of the villagers become unemployed and must either die of hunger or master some crafts oriented towards sales to the foreign market.

Thus, we see a fairly typical picture: first, the level of the division of labor grows, then, at some point, it stops. At this point, it can be increased at the expense of the external market, but in itself this output destroys the internal system of division of labor. And if you do not enter the foreign market, then nothing happens, the system begins to stagnate.

As the system grows, it deepens the division of labor. If the city supplies tractors and bicycles in exchange for marketable grain, repair shops will appear in the villages. And in the city itself - though not production (if it is small), but in-depth repair and restoration. However, at some point, it also becomes necessary to gain access to foreign markets, since a small town cannot even master its own production of tractors, even with neighboring villages.

It is in this place that what S.Glazyev calls the “technological way” arises, and O. Grigoriev the level of economic development, low, medium or high industrial. This is a quantity that is very closely related to the number of citizens participating in the system of division of labor (and not generally the citizens living in this territory!), And, as is clear, as citizens grow, whether it is natural or due to the expansion of the division of labor, transition to the next level.

Thus, according to Oleg Grigoriev, the United States reached a highly industrial level as early as the 60s, and the USSR did not reach it, although in some sectors, due to the planned economic system, it approached this level. S. Glazyev provides a more subtle “tune-up” of the movement of technologies, but the essence does not change from this — from a certain moment a new way is impossible without expanding markets. It is for this reason that all those technological zones that have fallen into non-existence have lost. Here, however, there are some subtleties (for example, the USSR could win in 70-s), but they need to be disassembled separately.

Of course, the modern system of division of labor is much more difficult to disassemble than the rural one. But you can build an analogy here - with the help of a pyramid. In order to build on the next technological "floor" you need to have a fairly wide base. There should be an even wider basis for the previous technological structure, and so on, until there is a very widespread personal consumption. And it is impossible to refuse it, because people consume approximately the same thing (essentially): food, clothing, housing, health care, education for children. And if we replace the plow with a tractor, then we get the opportunity to build a new floor of the technological pyramid - but in order for the tractor manufacturer to build it, it is necessary that quite a large number of people donate part of the product created by their labor for development.

Of course, each next way changes the technology of the previous one - but not the products that it creates! And the use of new technologies makes it possible to free people who work in new industries (although they may not be very much). At the same time, when investments are made in new technologies, there is still no income from them - they will pay off only later, as they develop, for this reason the risks of new innovations are always great, and the further the NTP goes, the higher the risks.

Here, of course, there can be subtleties, for example, you can force consumption without the growth of markets - as the US did in 80-e - 00-e. Well, they (or rather, all of us now) and received the corresponding consequences, will not seem to be enough. And according to the results of the current crisis, we will return to a situation earlier in terms of the level of division of labor than the end of 70's, when it all began. Our country is an example of how much technology we have lost and how much our technological system has degraded.

There remains only one question - robotics. There are questions here, since, theoretically, today such a production model can be created. By reducing the number of people inhabiting the planet sharply. The only trouble is that if after this reduction something goes wrong (well, for example, robots will begin to degrade and maintain the technological level will not work), then you may have to return to the Stone Age. And there is no certainty that a robotized civilization will work out - even in modern manufacturing, various assumptions about the role of robots that were expressed at the end of 70's, have not been confirmed.

In any case, while Adam Smith’s considerations remain relevant, it means that the conclusion that the further development of scientific and technological progress in the former understanding of this word is impossible is also still valid.