Ukrainian possibilities of modernization and creation of helicopters

October 3 2012
14
The main company engaged in the production of aircraft engines in Ukraine for airplanes and helicopters (Motor Sich association) was engaged in the modernization of helicopter technology. The company has already demonstrated a modernized - Mi-8MSB. The next in line will be the upgraded Mi-2 - Mi-2MSB and its military version of SME-2MO. 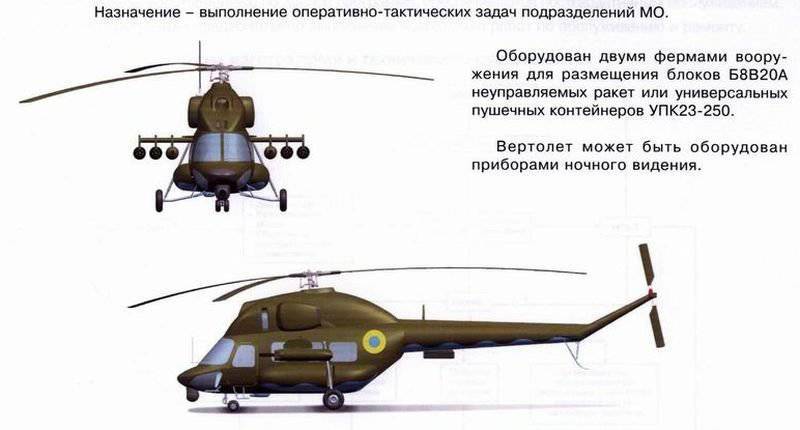 Mi-2MSB will be presented before the end of 2012. And although the money from the state to carry out a complex of works on the modernization of the helicopter fleet is allocated by the state, there is no clear definition for a renewed helicopter.

Mi-8T Modernization
Mi-8MSB will receive new engines of its own production "TV3-117 WMA GMS 1B 4E". According to the developers, engines and reconstruction will greatly improve the basic characteristics of the helicopter:
- reduced fuel consumption;
- The warranty period will be 16 years;
- increase the flight range;
- increase speed characteristics. 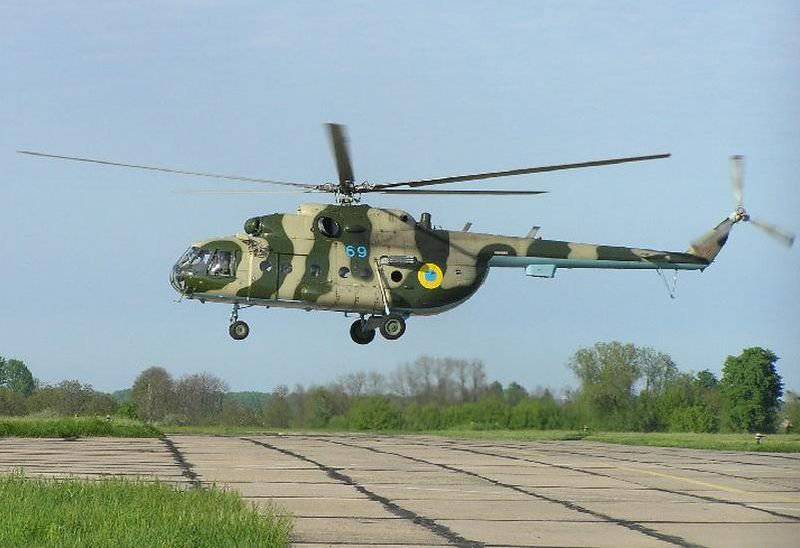 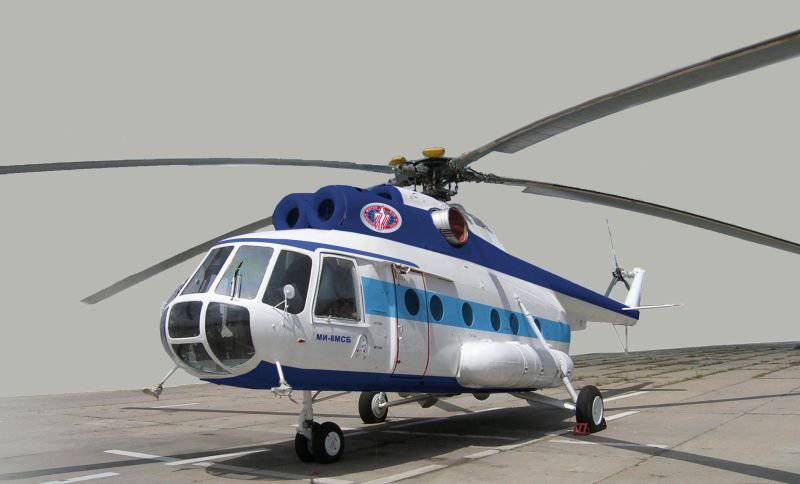 Mi-2 Upgrade
The Mi-2MSB will also receive new AI-450M engines that have 460 horsepower, instead of the installed GTD-350 (350 hp) engines. The basic characteristics, as well as with the modernization of MI-8MSB, will greatly increase. In the course of the work, it is decided to upgrade the control system, upgrade the glass cabin, increase comfort, change some design elements, some systems and components. 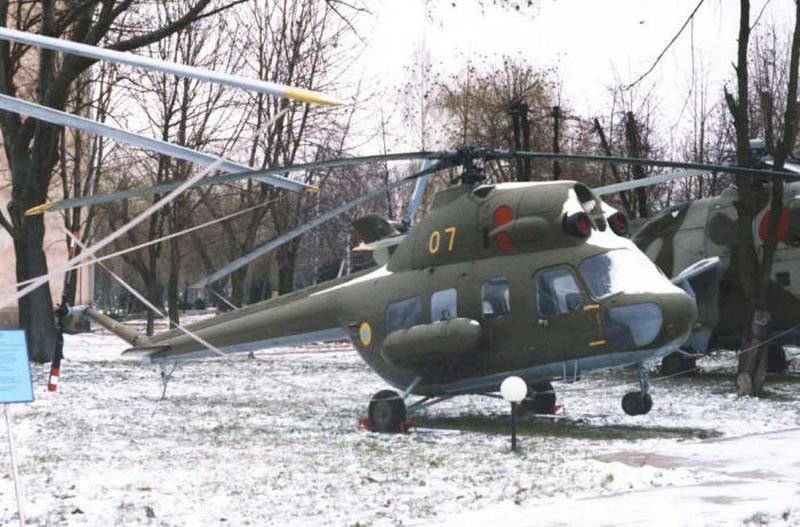 According to the representatives of Motor Sich, the cost of one upgraded helicopter will be less than its predecessor more than 2 times. At this time, more than a dozen of Mi-2 are being upgraded at the merger capacities. The Ministry of Emergency Situations is already ready to purchase several dozen modernized helicopters to provide for the Emergency Ministry units.

Major modifications:
- A helicopter for the Ministry of Emergency Situations, rescue version of MSB-2С;

- helicopter for the Ministry of Emergency Situations, fire version of MSB-2P;

- helicopter for the agricultural sector SME-2X; 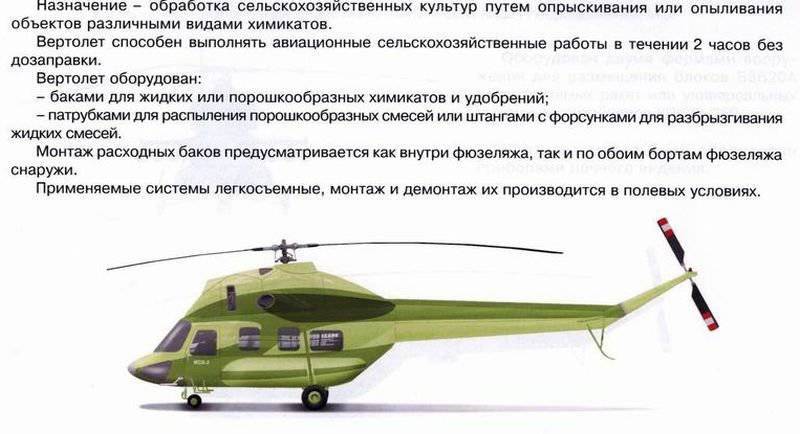 
Military modification of the Mi-2MSB
For the military department of Ukraine "Motor Sich" further modernization of the Mi-2 helicopter. The upgraded Mi-2MSB will receive two armament farms, on which it is possible to place blocks with NUR "B8В20А" or block-containers with universal rapid-fire installations "UPK23-250". Presumably the military modification will receive the name of SME-2MO.

The main purpose of the upgraded helicopter will be to accomplish the tasks of the operational-tactical plan, the destruction of ground armored vehicles and enemy personnel.
The prospects for the helicopter are broad enough:
- anti-helicopter;
- reconnaissance helicopter;
- helicopter to provide surface ships.

In general, the creation of helicopters in the association is mainly associated with the unrealized idea of ​​creating helicopters in the enterprise at the end of 1990. Then, specifically for this, they bought a license for Ka-226. For this helicopter at the factory created aircraft engines. But it was not possible to launch the helicopter into mass production at the time.

At this time there is no complete clarity, where there will be a main production site for helicopters. At first, the production of helicopters was planned to use the power of the Vinnitsa aircraft factory (the Vinnitsa aircraft factory is involved in the helicopter remodeling, at least for Mi-2 helicopters), but now it is no longer among the possible sites for the modernization and production of helicopters. Work with the Mi-2 / 8T helicopters is being carried out at the experimental site at Motor Sich. New components for modernization, such as details of the design of the fuselage, cockpit and interior space, will be produced at the Sevastopol, Kherson and No. 140 plants.

According to representatives of the association, according to their calculations, on average, the Ukrainian aviation market is ready to purchase 500 units of low-cost medium-sized helicopters. The civilian sector needs 300 units, government services and security agencies (except aircraft) in 150 helicopter units.

Currently registered (civil sector) in Ukraine about 200 helicopters. In just the past five years, more than 200 MI-2 / 8 / 26 type helicopters were removed from registration.

The condition of helicopters in the service in the armed forces (like any other military equipment), to put it mildly, “does not shine”. Almost all helicopters are at least 20-year-old. In total, the Ukrainian military has 150 helicopters, most of which require repairs of various levels of complexity.

It would be desirable to hope that carrying out these upgrades will allow the association to acquire the necessary experience, build the necessary capacities and carry out the required repairs to military helicopters. 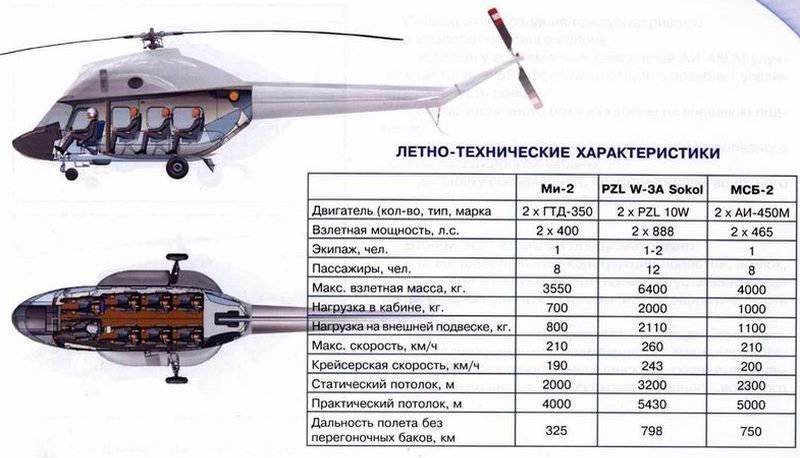