October 3 2012
34
In 2011, the Russian Navy decided to refuse and no longer buy small Zubr hovercraft, pr. 12322. Instead, for the needs fleet it is planned to build new vessels of a dynamic and non-dynamic type of keeping afloat, which will be used on various landing vessels, including helicopter carriers of the Mistral project. According to the Izvestia newspaper, which cites its sources in the country's military-industrial complex, the new landing ships will be smaller in size than the existing Bison. Other technical details of promising land-based delivery vehicles have not yet been announced. Meanwhile, the Russian Navy is still armed with 2 ships of this project - Evgeny Kocheshkov and Mordovia. They are part of the Baltic Fleet and will be maintained in combat until they fully exhaust their resources. Another 4 landing "Bison" are currently in service with the Greek Navy.

The development of Zubr hovercraft (MDKVP) began in the USSR in 1978, and the first production ship entered the fleet 10 years later in 1988. The ship could take on board 10 armored personnel carriers with a total weight of up to 131 tons and 140 paratroopers or 8 infantry fighting vehicles weighing up to 115 tons or 3 main combat tank weighing up to 150 tons. Instead of military equipment on the "Bison" could fit 366 more paratroopers. Over the entire production period of the Zubr MDKVP, 14 such vessels were produced. Of these, only 2 ships remain in service with the Russian fleet. According to the Yantar shipbuilding company, both Russian Bison are in need of major repairs.

At the same time, there are currently no funds for upgrading and carrying out ship repair, therefore all funding is spent only on keeping the landing craft in combat condition. According to representatives of the Yantar plant, each of the MDKVP Zubr has 5 gas turbine engines installed, each of which is 4 000 hours. New power plants can only be purchased at the Zorya-Mashproekt plant at a price of approximately 1 million dollars per unit.

In the middle of 2011, China began to show interest in these ships. According to Rosoboronexport, China acquired the 4 ship of the 12322 project from Ukraine. At the same time, Russia's intellectual property rights on this ship were violated. In addition to the "Bison" themselves, the PRC became the owner of almost all technical documentation, which will allow the Celestial Empire to organize its own production of air-cushion landing craft at its shipyards.

Currently, the Bison is the largest hovercraft in the world. This ship is able to travel 300 nautical miles with the speed of a passenger car. This is quite enough to cross the Black Sea, to cover the enemy’s coastal fortifications with a firing salvo and to land the marines with all their weapons and armored vehicles. Few people know today, but initially the Zubr was designed as a strike boat that was to be armed with powerful cruise missiles. Another project that could be called fantastic was also worked out. Zubr could become the basis for a mobile strategic installation with a nuclear weapons on board. However, in the end, the amazing ability of such vessels to move equally by water and by land forced the military to change their plans. The ship was landing

The 12322 Zubr small air-cushion landing ship project (MDKVP) is designed to receive aboard marine infantry units with military equipment from the unequipped or equipped coast, as well as transporting them by sea and disembarking on the coast of a potential enemy. At the same time, the ship could carry out fire support for the airborne troops, as well as the transportation of anti-ship mines and the laying of minefields. Aircraft "Zubr" are the largest in the world. They are able to go ashore, overcome trenches, ditches, move through marshland, land troops in the depths of enemy defenses. For MDKVP "Bison" for landing, about 70% of the entire length of the coastline of the seas and oceans of the Earth is available. 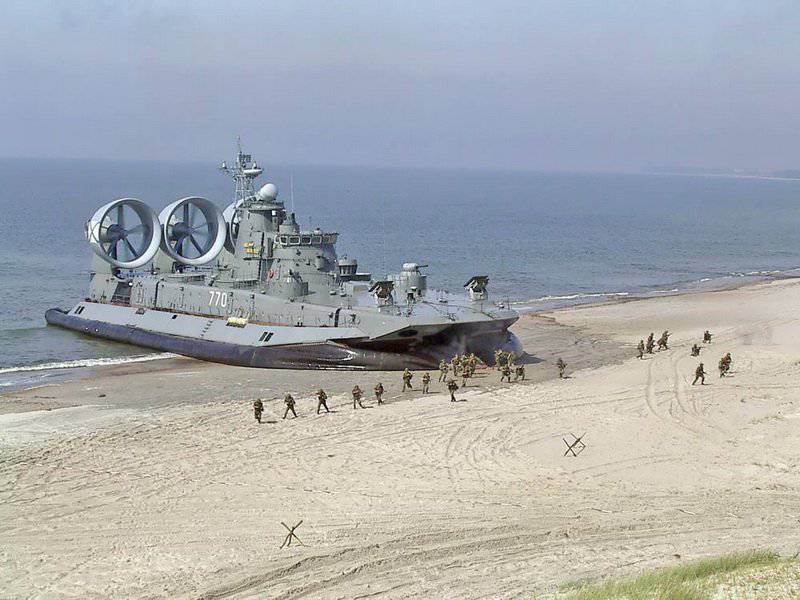 The contours of the small landing ship "Zubr" are characteristic of vessels with a small ratio of length to width. Its body and superstructure are welded and made of light alloys. The cargo hold of the ship has a bow and stern ramp and runs along the entire hull of the ship. The superstructure is located in the middle of the hull. In addition to the cargo hold, there are no special facilities on the ship, therefore, the ship has a very small navigation autonomy - just 5 hours.

The bearing part of the ship's hull, which ensures its unsinkability and durability, is a rectangle-shaped pontoon. The superstructure located on it by special longitudinal bulkheads is divided into 3 parts. The middle part with tank lanes and ramps serves to accommodate the landing technique, and the airborne units are used to accommodate the main and auxiliary power plants of the ship, crew accommodation, landing, as well as systems of protection against weapons of mass destruction and life support. Ventilation, heating and air conditioning systems are used in the premises to accommodate the landing party, the crew, as well as at the combat posts; heat and sound insulating coatings and structures made of vibration-damping material are used. In this case, the crew of the vessel is provided with all the necessary conditions for a comfortable diet and rest.

The hull of an airborne amphibious assault ship is all-welded and made of a high-strength corrosion-resistant aluminum-magnesium alloy. Bunk flexible fencing (mounted elements and flexible receiver) are used to hold the air cushion under the hull of the amphibious assault ship, as well as to ensure the necessary height of the Bison above the supporting surface (ground clearance). 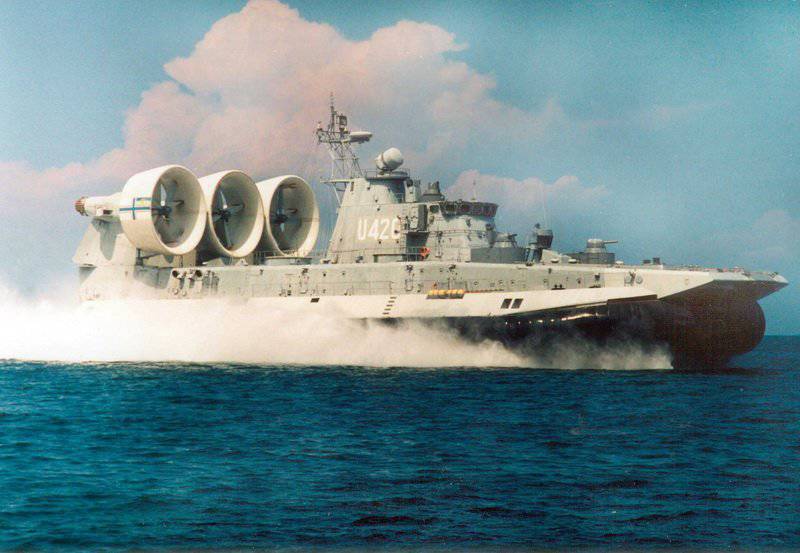 The main power plant consists of 5 high-temperature gas turbine engines - gas-turbine engines of the M-70 type, with a total power of 50 000 HP. Of these 5 engines: 2 worked on fan drives with 4 blower units of type HO-10, and 3 GTEs were located in the outer nacelles and set in motion 3 four-blade reversible screws having 5,5 diameter and located in special ring-mounted nozzles. In addition, Zubr had 2 power stations, each of which consisted of 2-s gas turbine generators having a power of 100 kW and main switchboards.

The control of the ship was centralized, automated, remote and could be carried out from the main control station, as well as the central control station and a number of remote controls. For navigation, the 12322 ships were equipped with 2 radar stations, a magnetic and gyro compass, a drift bed, satellite navigation equipment, and a decca receiver and indicator system, a central gyro system, a radio direction finder, and night and day vision sights.

The existing complex of communication devices allowed us to provide reliable telegraph and telephone communications in the VHF, HF, UHF bands, as well as receiving, documenting and printing meteorological, navigation and other data.

The maximum carrying capacity of the ship reached 150 tons and ensured the transportation of any military equipment and personnel within this restriction. To accommodate the personnel of the landing on the ship was provided 4 space for 140 seats. If necessary, the room for military equipment could be converted to transport the personnel of the landing force in full gear, this made it possible to place an additional 360 man on the ship. Instead of landing, the ship could take on its 78 anti-ship mines. 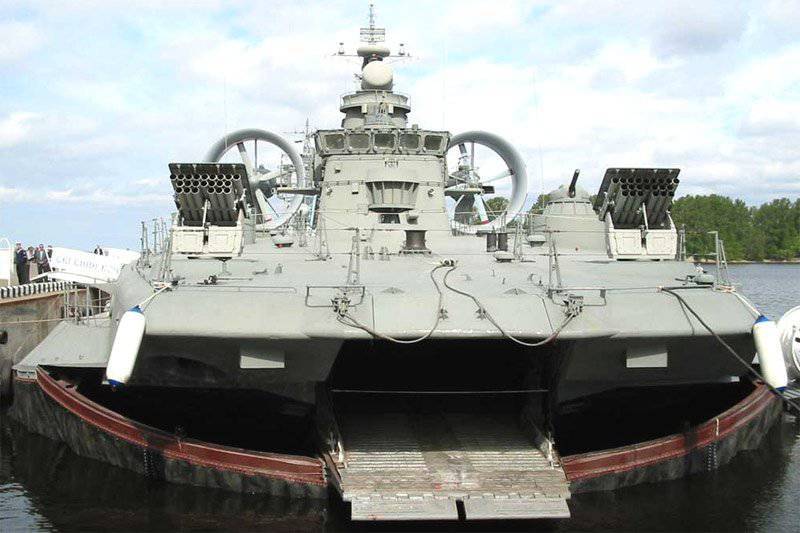 "Evgeny Kocheshkov" of the Baltic Fleet of the Russian Navy, 2008-2009.
For fire support of the assault forces at the time of disembarkation, as well as for self-defense, an armament complex was installed on the ship as part of the 2-x installations for firing unguided missiles 140-mm MS-227 “Fire” (132 ammunition) and two 30-mm six-barreled artillery installations AK-630 (3 000 rounds of ammunition) with a fire control system and 1 x 2 PU MTU-2 SAM "Needle-1М" (8 to 32 ЗУР). For the implementation of electronic warfare at the Zubr, the Slabing complex was used, and for setting minefields, a portable kit was used, which allows to install from 20 to 78 mines, depending on their type.

The air-cushion landing ship Zubr has become one of the fastest ships in the world. Even the designers themselves do not know the real limits of his speed. During the sea trials, the ship was dispersed to 70 nodes and then it was considered that this was not the limit. But at the same time at high speeds the ship had a little-studied effect - the meanness of the flexible cushion fence. In the event of such a situation, the designers provided for the blocking mode in critical modes of movement along the turn radius and in speed.

It is worth noting that the outstanding achievement of the Zubr-type hovercraft is the combination of sufficient payload, high speed and unique amphibiousness. According to some military experts, the ships of the 12322 Zubr project are ahead of their time for many years. 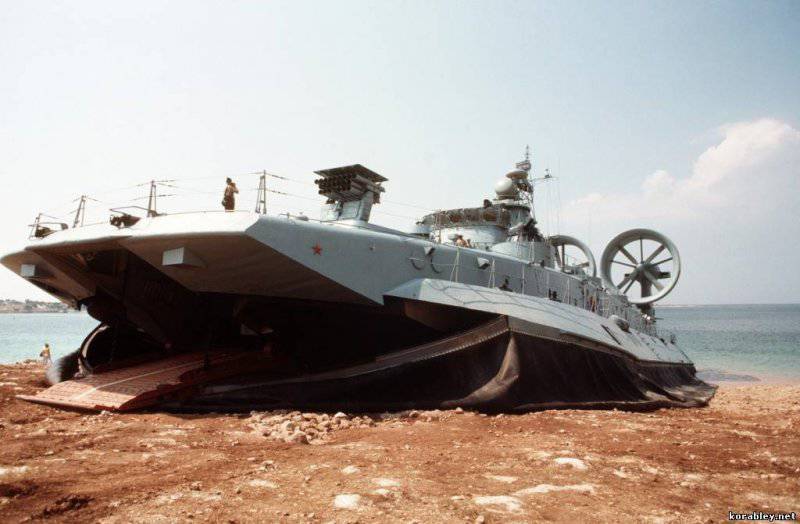