ICBM "Sarmat": the first start and a great future 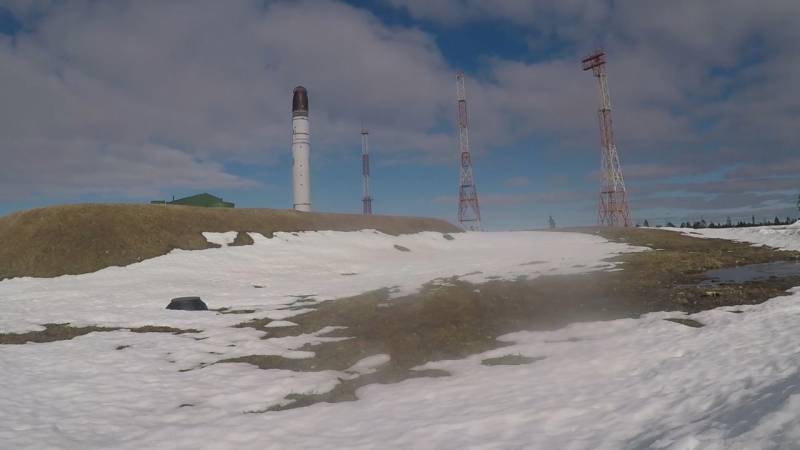 Flight tests of the RS-28 Sarmat, a promising heavy-class intercontinental ballistic missile, have begun. The first launch was recognized as successful, and new ones will take place in the near future. Based on the results of these measures, the missile system will be put into service and will take up combat duty. With the help of the Sarmats, the strategic missile forces will be able to upgrade their arsenals, as well as improve their combat capabilities.

According to the Ministry of Defense, the first test launch of the RS-28 product took place on April 20, 2022 at 15:12 Moscow time at one of the sites of the Plesetsk State Test Cosmodrome. Due to the high importance of the event, the leadership of the Ministry of Defense and President Vladimir Putin watched it via video broadcast.

At the command of the combat crew, the experimental ICBM left the silo launcher at the specified time and went flying along the required trajectory. The conditional combat mission of the rocket was to deliver several inert warheads to designated targets at the Kamchatka Kura training ground.

The experimental missile worked in accordance with the program, and the training warheads arrived in the assigned area at the estimated time. The first test launch of the Sarmat was recognized as a complete success. The rocket at all stages of the flight showed the design characteristics. The correctness of the chosen technical and design solutions underlying the project was also shown. 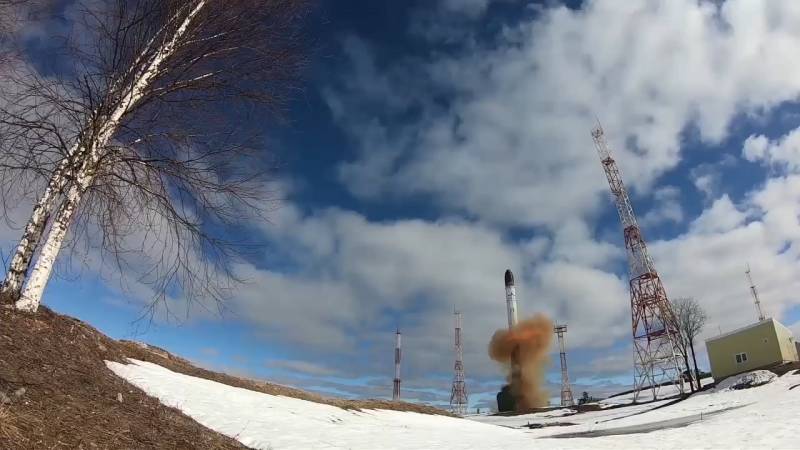 The first launch of the RS-28 rocket launches the program of state tests of the new complex. After its completion, "Sarmat" should be adopted by the Strategic Missile Forces. Details of the upcoming state tests, such as the number of launches, the timing of their implementation, etc., are not given.

At the same time, the Ministry of Defense reports that the missile forces are already preparing for the acceptance and operation of new weapons. So, in the Uzhur formation of the Strategic Missile Forces, serving in the Krasnoyarsk Territory, work has already begun on preparing the infrastructure of one of the regiments for the adoption of "Sarmatians". Having received a promising ICBM, this unit will be able to remove the existing R-36M Voevoda products from duty.

The first test launch of the Sarmat is of great importance for the development of the Strategic Missile Forces and their weapons in the medium and long term. At the same time, it can be called a long-awaited event. The fact is that the preparation for full-fledged flight tests took several years, and their start was repeatedly postponed. This gave cause for concern, but now the necessary measures have been taken, and there are grounds for optimism.

The promising RS-28 missile system was developed by the State Missile Center. V.P. Makeev for ten years. At the end of 2017, the first throw tests of an experimental product took place at the Plesetsk cosmodrome; in the following months, two new launches of this kind were carried out. In March 2018, Sarmat, along with other promising models of strategic designation, became one of the topics of the presidential message. 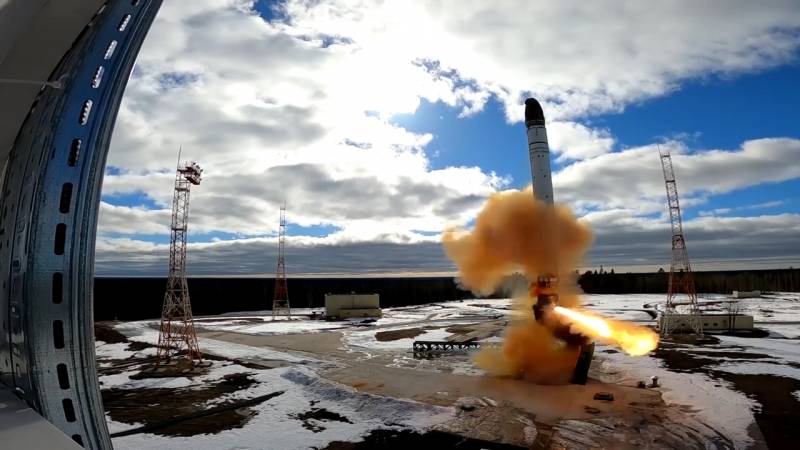 After all the delays and transfers, the first test launch was completed under the full flight program. At the same time, we are talking about state tests, which will determine the fate of the project. All this shows that the project has moved far enough and got rid of possible problems and difficulties. Accordingly, "Sarmat" can be adopted already this or next year.

According to known data, the product RS-28 or 15A28 is a heavy class liquid ICBM, made using modern technologies and components. The missile is built according to a three-stage scheme and has a length of more than 35 m with a diameter of 3 m. The launch weight is up to 210 tons, of which 10 tons are for combat equipment.

Due to new technical solutions and components, it was possible to dramatically increase the firing range in comparison with previous ICBMs. The range of the RS-28 is characterized as "global" and, according to various sources, reaches 15-18 thousand km. This allows you to control almost the entire globe and choose the best flight paths. 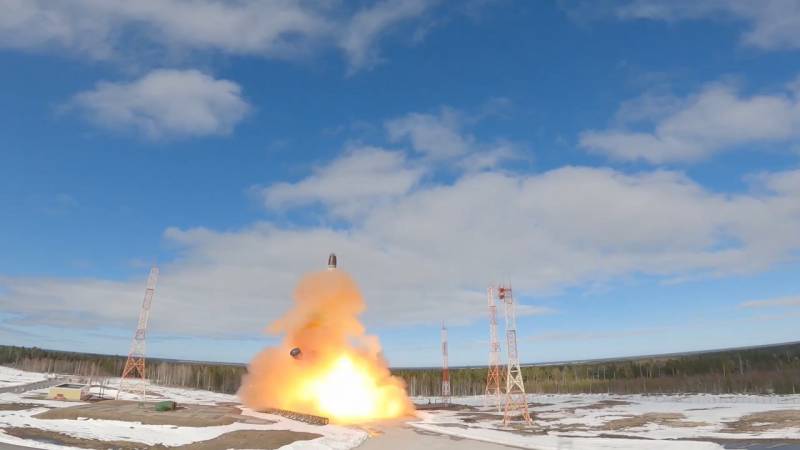 It is known that "Sarmat" can carry combat equipment of different configurations. First of all, these are different versions of multiple warheads with individual guidance. In addition, the new missile will become the carrier of the Avangard hypersonic warhead.

Like previous domestic heavy ICBMs, the new RS-28 will only be used with silos. At the same time, the Strategic Missile Forces will do without the construction of new mines. Under the "Sarmatians" the existing launchers of the complexes of the R-36 line are being rebuilt. Accordingly, replacing the existing "Voevod" with the RS-28 will be relatively simple and quick.

The Sarmat project is of particular importance for our Strategic Missile Forces. Its successful completion will predetermine the appearance and capabilities of the troops for the next few decades. First of all, it will make it possible to keep heavy-class ICBMs on duty, which have a number of important advantages. The existing products R-36M and UR-100N UTTKh are morally and physically obsolete, and the new RS-28 will take their place.

Cash heavy ICBMs were created in Soviet times and within the framework of the all-Union cooperation of enterprises. Now this approach to the development and production of strategic weapons is unacceptable, and the Sarmat project takes this into account. Unlike its predecessors, the RS-28 missile is made entirely from domestic components and does not depend on foreign suppliers.

While maintaining the required dimensions and weight, higher flight characteristics were obtained. The increase in range to 15-18 thousand km allows you to control most of the planet. It also makes it possible to carry out launches not only along the shortest trajectories, but also along routes that give certain advantages. In particular, it becomes possible to fire around enemy missile defense areas of responsibility. 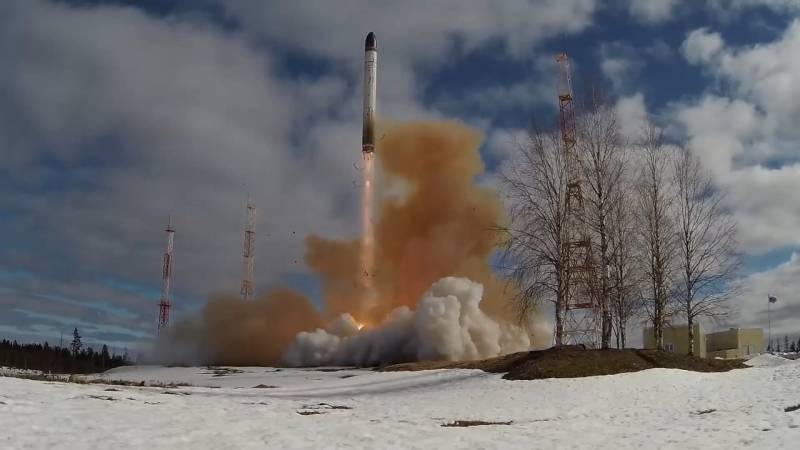 The most important advantage is the ability to use different options for combat equipment. Saved "traditional" warheads flying along a ballistic trajectory. The combat capabilities of such weapons, supplemented by missile defense breakthrough means, are well known. In addition, the RS-28 will receive a hypersonic gliding warhead with a fundamentally different potential.

In general, the RS-28 / 15A28 ICBM should become a highly efficient and flexible tool capable of solving strategic tasks in one way or another. At the same time, it will be used in parallel with missiles of other classes, and all together these weapons will give the Strategic Missile Forces the widest possibilities in the field of strategic nuclear deterrence.

Thus, the product "Sarmat" is of particular importance both for the strategic missile forces and for the country's security. The first test launch of such a missile is an important event, the positive consequences of which will be observed over the next few decades.

However, do not rush things. All the desired results "Sarmat" will give only a few years. So far, the industry and the missile forces have to conduct tests. Then the process of re-equipment of combat units will begin. All these activities take time, but the new missile and its capabilities fully justify such an expectation.