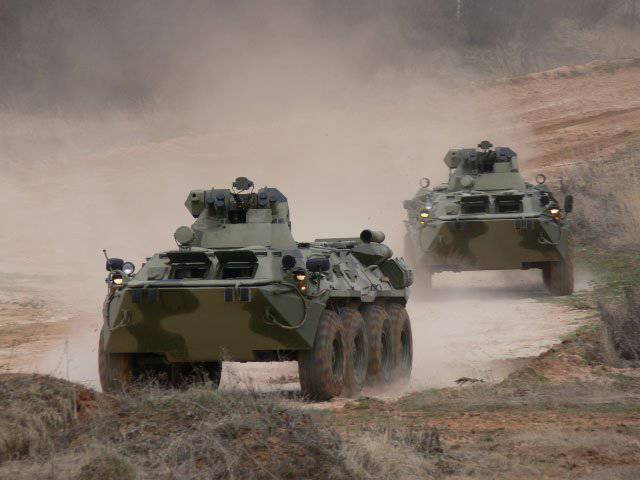 Several dozens of new formations will be formed in the Ground Forces of Russia before 2020. This was reported to ITAR-TASS by a representative of this type of Russian Armed Forces, Lieutenant Colonel Nikolai Donushkin in connection with the Day of the Ground Forces celebrated today.

He explained that formations mean brigades or divisions. Touching on their equipment, Donyushkin noted that "as part of the implementation of the State armament program until 2020, a comprehensive re-equipment of the Ground Forces by 2015 with new and modern models of" weapons and military equipment was planned. "Now in combined arms and tank units receive modernized models of armored weapons and equipment - T-72B1 / 2, BTR-82A. In the near future, prospective unmanned aerial vehicles and special armored vehicles will enter the reconnaissance units, said a spokesman for the troops. “The S-300B4, Buk-M3, and Tor-M2 anti-aircraft missile systems and new portable anti-aircraft missile systems will come to the military air defense units.”

In addition, the Iskander-M operational-tactical missile systems, the Tornado-G / S rocket launcher systems, the Msta-S self-propelled howitzers with an automated guidance control system will be supplied to the missile and artillery units. Ground forces will receive new combat gear.

Donyushkin also said that "to increase the mobility and fire capabilities of the Ground Forces, by 2020 fourteen army brigades will be formed aviation".

“One of the most significant events in the preparation of military authorities and troops in the coming year will be the joint strategic exercises of the armed forces of Russia and Belarus“ Zapad-2013, ”he stressed.“ In scale, these exercises will correspond to the strategic command and staff exercises held this year. ” Kavkaz-2012 ", as well as the past strategic exercises" Center-2011 "," East-2010 "," West-2009 ".