October 2 2012
12
Concrete slaughter aviation Bombs (BetAB) are designed for the effective destruction of reinforced concrete coatings and runways of airfields. Structurally, they are represented by two main types of bombs: free fall and with jet boosters. Concrete free-fall aerial bombs are designed to bomb from high altitudes and are structurally very close to standard thick-walled high-explosive bombs. Concrete bombs with a parachute and a jet accelerator are used for bombing from any altitude (including low). Due to the parachute, the angle of incidence of the bomb increases to 60 degrees, after which the parachute is shot off and the jet accelerator is launched.

Most often, the mass of concrete bombs is 500-1000 kg., While there may be bombs and larger caliber. Of this kind weapon designed to destroy objects with durable concrete or reinforced concrete protection or heavily armored objects. For example, fortifications (such as DOT), bunkers, coastal batteries, runways or large warships.

Currently, the most popular American concrete-bomb, which is known in the world, is GBU-28 (BLU-113), which was created before the operation "Desert Storm" and was designed to destroy Saddam Hussein's bunkers. The task of developing such bombs in October 1990 of the year was given to the design division of the ASD Development Planning group, located at the US Eglin Air Force Base in Florida. Specialists from Space Company and Lockheed Missile were also involved in the work on this project.

In order to successfully penetrate the soil, concrete floors and armor, the bomb must be heavy enough, and also have a small cross section (in order not to "smear" its kinetic energy over a large area), in addition it must consist of a hard metal. This is necessary so that when in contact with an obstacle the warhead does not work on a solid surface, but penetrates it. At one time in the USA, they broke their head over to find and create a suitable housing for a concrete bomb. The way out was suggested by a former army officer who worked for Lockheed. He recalled that a large number of barrels for 203-mm howitzers M201 SP are stored in artillery depots. 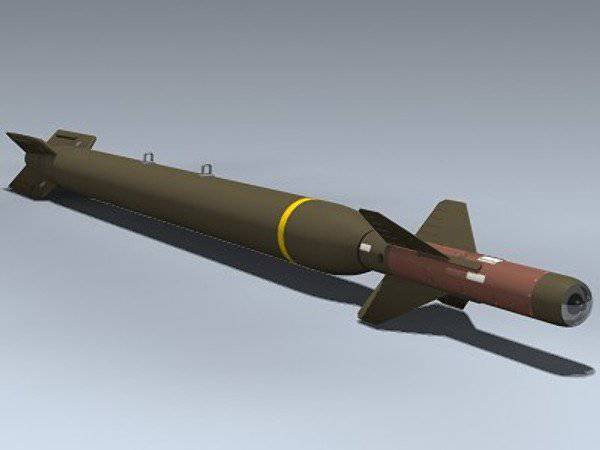 GBU-28
These barrels were made of a suitable alloy and were found in sufficient quantities on artillery arsenals, in particular at Watervliet arsenal, located in the state of New York. It was in the workshops of this arsenal artillery barrels were brought to the required size. For the manufacture of bombs, they were cut to the specified dimensions, after which they removed all protruding elements located on the outside. Inside the trunks were specially drilled, their diameter was reduced to 10 inches (245 mm). This was done in order to apply the tip from the old BETAB BLU-109 to the new “body” of the bomb.

From the territory of the Watervliet arsenal, the assembled bomb shells were delivered to Eglin base, where they were to be filled with explosives. At the same time, there was simply no special equipment for a bomb of this size at the air base, and the military had to work with almost artisanal methods. So in particular, the insulating layer, which was applied to the inner surface of the bombs, had to undergo a heat treatment procedure in a special furnace, but instead, engineers at the military base were forced to use a home-made external heater. Having dug the bomb case into the ground, hot melted tritonal was poured into it manually in buckets. For the bomb guidance system, a GBU-24 laser sighting device was used. The result of all the work was the combat unit, called BLU-113, and the whole bomb received the entire designation GBU-28.

Since time was pressing for the creators, they didn’t conduct a series of 30 test runs, confining themselves to only two. 24 February 1991, the first GBU-28 bomb was dropped from an F-111 aircraft on a desert landfill in the United States. Concrete bomb went into the ground to a depth of 30 meters - from this depth, it was even decided not to dig. Another 2 day later, the bomb was dispersed on a jet rail trolley and fired at a vertically standing stack of reinforced concrete slabs. As a result, the bomb broke through all the plates and flew another 400 meters.

Another 2 corps, which were prepared at Eglin airbase, were charged with explosives, equipped and sent for combat tests in Iraq. Taking full advantage in the air, the 23 February 1991, the 2 tactical fighter F-111, reached its target without any difficulty - one of the underground bunkers belonging to the Iraqi army. While one of the F-111 illuminated the target, the other went to the bombing. As a result, one of the bombs passed by, and the other hit right on target, leaving no visible signs of damage on the surface. Only after 7 seconds from the ventilation shaft of the bunker came thick black smoke, which could mean only one thing - the bunker was hit and destroyed. The entire 28 month has passed from the task setting to the combat tests of the new GBU-4 bombs. 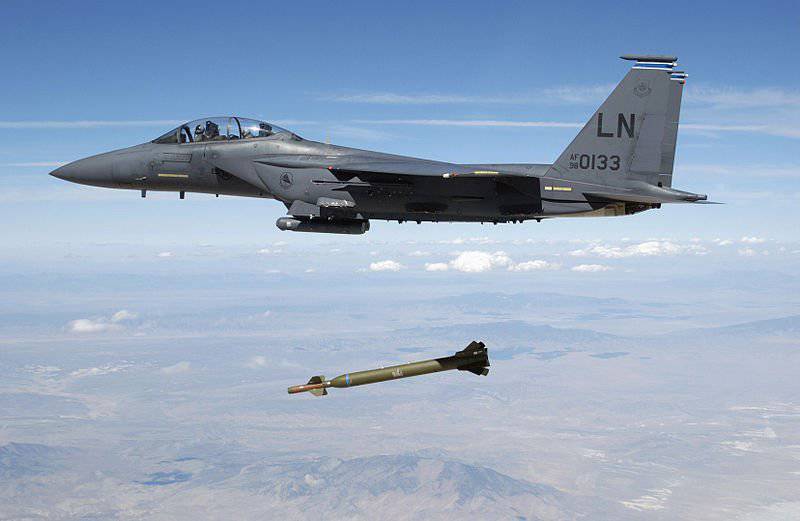 Reset GBU-28 with F-15
Foreign developments in this area

As early as the beginning of the 90s, the defense ministries of a number of NATO countries: the USA, Germany, Great Britain, France set requirements for high penetration ammunition. Such bombs were planned to be used against well-defended underground enemy targets (floor thickness up to 6 meters). At present, only one type of aerial bombs that are able to destroy such objects are produced in sufficient quantities. This is the American BLU-113 aerial bomb, which is part of the GBU-28 and GBU-37 guided aerial bombs (UAB) (total weight 2300 kg). Such concrete bombs can be placed in the armament compartment of the strategic bomber B-2A or on the ventral point of the suspension of the tactical fighter F-15E. On this basis, the military are thinking about creating lighter ammunition of this type, which would allow them to be used from other aircraft, which have limitations on the size and weight of the bombs placed on the pylons.

American and European experts put forward 2 concepts to create new concrete-breaking ammunition weighing no more than 1 000 kg. According to the concept created in Europe, it is proposed to create a new type of tandem concrete-borne combat units (TBC). Currently, the British Air Force already has concrete submunitions with a tandem arrangement of cumulative and high-explosive charges - SG-357, which are part of the equipment of the drop-down aircraft cassette JP-233 and is intended to destroy the runways of aerodromes.

But due to its small size and low power, the SG-357 charges are not able to destroy objects located deep underground. The proposed new TBBCH consists of an optical proximity fuse (ONLU), as well as one or more shaped charges, which are located directly in front of the main combat part of the bomb (PSL). In this case, the body of the main warhead bombs made of high-strength materials based on tungsten steel with the use of other heavy metals with similar properties. Inside there is an explosive charge, and at the bottom of the bomb is a programmable explosive device.

According to the developers, the loss of OBCH kinetic energy as a result of interaction with detonation products will not exceed 10% of the initial value. The undermining of the cumulative charge occurs at the optimal distance from the target according to information coming from the DLV. The free space resulting from the interaction of the cumulative bomb bomb with the obstacle is sent to the RCU, which, after hitting the remaining part of the barrier, explodes inside the object. Laboratory studies have shown that the depth of penetration of concrete bombs in the barrier depends mainly on the speed of impact, as well as the physical parameters of the interacting bodies (such as hardness, density, tensile strength, etc.), as well as the mass ratio of the warhead and cross-sectional area , and for bombs with TBBCH also from the diameter of the shaped charge. 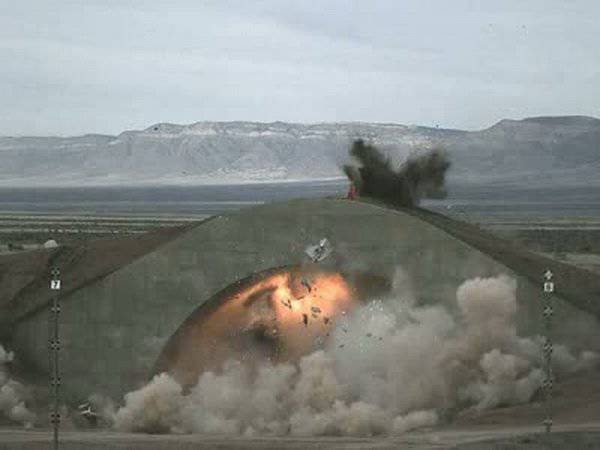 Bombing a Concrete Aircraft Shelter
During tests of bombs with a TBHB weighing up to 500 kg (impact velocity with an object 260-335 m / s) it was found that they can penetrate into the soil of medium density at depths in 6-9 meters, then punch through a concrete slab with a total thickness of 3 -6 meters. In addition, such ammunition can successfully hit targets at smaller than conventional concrete bombs, the values ​​of kinetic energy, as well as at less acute angles of attack and more acute angles of approach to the target.

In turn, the American specialists took the path of improving the existing unitary concrete-fighting combat units (UBBCH). A feature of the use of such bombs is that they need to give a large kinetic energy before a collision, as a result of which the requirements for their hull are significantly increased. When creating new ammunition, the Americans conducted a series of scientific studies to develop highly durable alloys for the production of the hull, as well as to find the optimal geometric dimensions (for example, the nose of the bomb).

To increase the mass ratio of the warhead and the cross-sectional area, which provides greater penetrating power, it was proposed, while maintaining the existing dimensions of existing ammunition, to increase the thickness of their shell by reducing the amount of explosive in the warhead of bombs. The advantages of new UBBCH can safely include the simplicity of their design and lower price, especially in comparison with tandem ammunition. As a result of a series of tests, it was found that a new type of UBBC (weighing up to 1 000 kg and a speed equal to 300 m / s) can penetrate into the soil of average density to a depth from 18 to 36 meters and pierce reinforced concrete floors of 1,8-3,6 meter . Work to improve these indicators is still ongoing.

At present, the Russian army is armed with an 2 type concrete bombs weighing in 500 kg. The BETAB-500U free-fall concrete bombing bomb is designed to destroy underground ammunition depots, fuel, nuclear weapons, communications centers, command and control centers, reinforced concrete shelters (including aircraft), highways, taxiways, etc. This bomb is capable of penetrating 1,2 meters of reinforced concrete or up to 3 meters of soil. It can be used from heights from 150 meters to 20 000 meters at speeds from 500 to 2 300 km / h. To ensure the angle of incidence 90 degrees bomb equipped with a parachute. 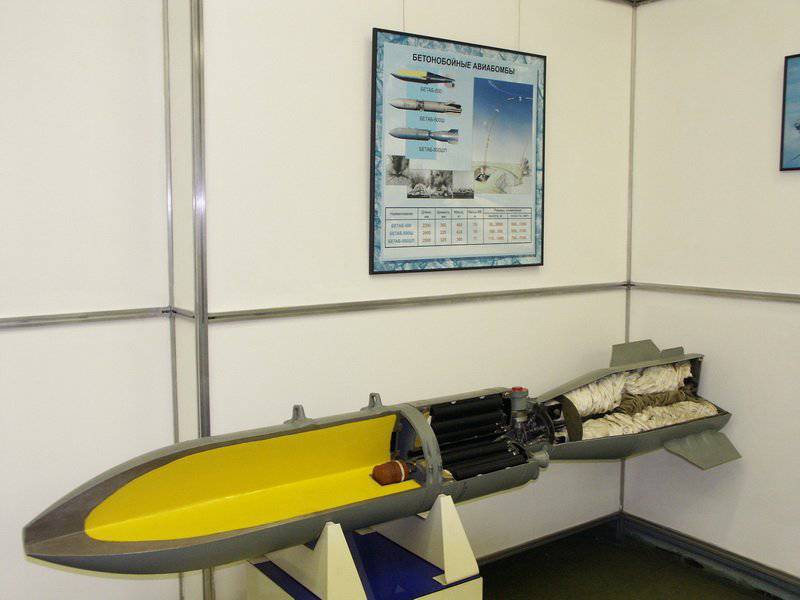 Russian concrete bomb BETAB 500ShP in the section
BETAB 500U

The second concrete bombing bomb is BETAB-500ShP - assault with a jet accelerator. This bomb is designed to destroy the runways of airfields and taxiways, reinforced concrete shelters of aircraft, highways. This ammunition is able to penetrate armor with a thickness of up to 550 mm. In the soil of medium density, the bomb is capable of forming a funnel with a diameter of 4,5 meters. When a bomb hits a runway, the concrete surface is damaged over an area up to 50 square. meters This bomb is used from aircraft at a speed of 700 - 1150 km / h and at altitudes from 170 to 1 000 meters (with horizontal flight). When bombing from a dive at an angle of no more than 30 degrees and at a height of at least 500 meters.