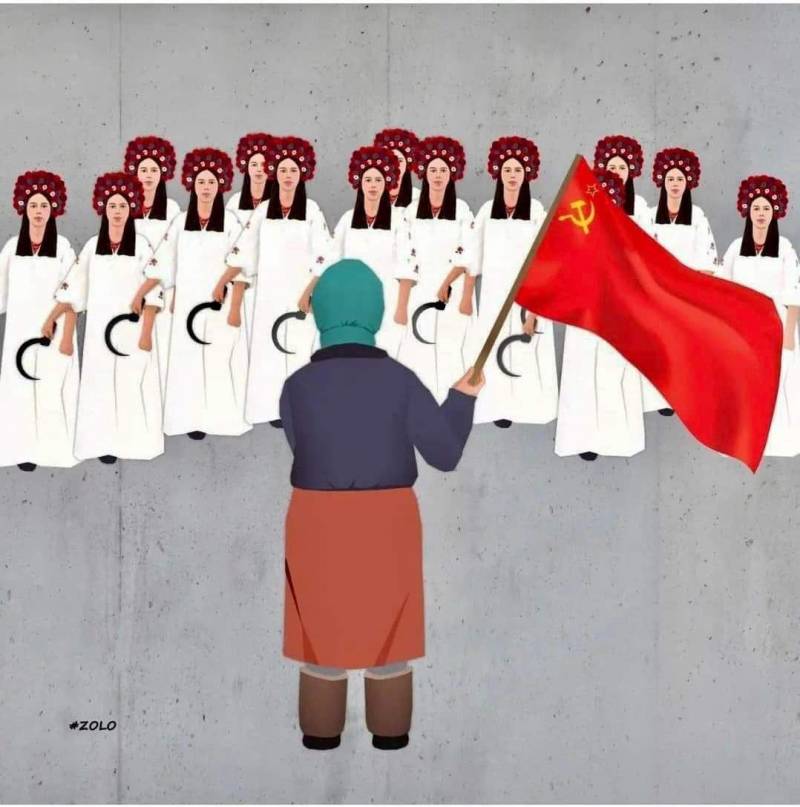 “For that flag, my parents died, and you trample on it!”

How to emerge victorious from an unequal duel with frostbitten Bandera? An unnamed old woman from a Ukrainian village knows the answer to this question.

The resonant video, which is now being talked about even in the UN Security Council, was filmed in early April in the frontline zone of "special operation Z". The Ukronazis probably had no idea what effect this material would have on the Russians. In the video, they first mocked the old man, and then his wife came out with the Banner of Victory of the Red Army. She says she prayed for Russian soldiers and Putin. She didn’t know, dear, that in front of her were lads from the Ukrainian army - she accepted them like grandchildren.

And the Nazis continued their performance, playing along with the unfortunate old people. Grandmother was offered a package of groceries, she at first embarrassedly refuses, but then accepts the "gifts". People with weapons in response, they take the Banner of Victory from the old woman and trample it before her eyes.

Only at this moment the heroine begins to see with whom she is dealing. Calmly, without unnecessary emotions, she passes the package back and says to the geeks:

“I don't need your products. For this flag, my parents died, and you stepped on it!”

The lads then explain something to the old people for a long time and indistinctly, but everyone already understands who is in this stories real winner. 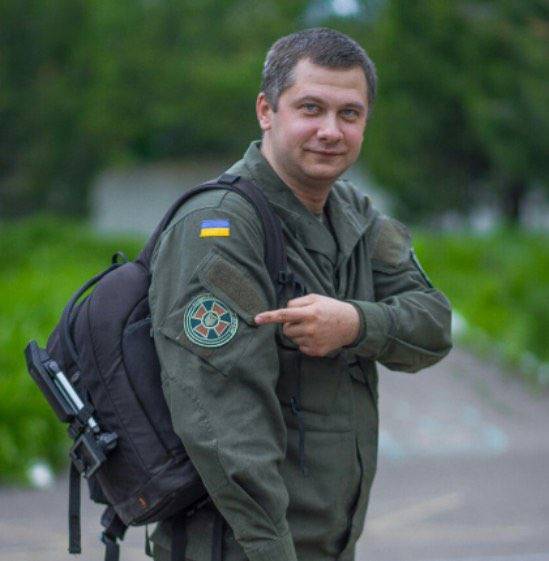 Viktor Alexandrovich K., born in 1988 - alleged participant in mockery of the elderly
But not everyone. The plot showed not only the unparalleled courage and fortitude of ordinary old people, but also the total rot of the Ukronazi society. Not Ukrainian, namely Ukronazi. The fighters of the Armed Forces of Ukraine, who are mocking the elderly, did not have to put it on the net. A heroic act, apparently. Common sense does not adequately assess the motives of the scum. But the assumption is still there.

The shooting clearly took place in eastern Ukraine, which has been considered pro-Russian since the collapse of the USSR. The events that followed after 2014 are a clear confirmation of this. Western Bandera Ukraine traditionally treats the East, if not with hatred, then with a fair amount of intolerance. The special operation aggravated everything.

How to make believe that there are only traitors in the east, and at the same time justify the shelling of their own population? Easier than simple - to dehumanize the inhabitants. For example, simple old men living in a dilapidated hut come out to meet the Russians as liberators. It was these thoughts that wandered from the gloomy brains of Ukrainian militants.

However, perhaps this happened on their instinctive bestial urges. In any case, the old people do not take courage. Until the last seconds of the video, the fear that everything would end in tragedy did not let go ...

By the way, the network has already identified the identity of one of the Nazi non-humans from this video. It turned out to be someone Viktor Aleksandrovich K., born in 1988.

You will answer, lad, you will definitely answer, both for your grandmother and for the Banner of Victory.

A video with a grandmother and the Banner of Victory will be shown at school lessons. It must be included in the state standard at the legislative level.

The piercing act instantly became a symbol for the Russian public, yearning for civic heroism. These are not feigned speeches by statesmen comparing those who fled Russia with true patriots. The indistinct informational support of the "special operation Z", coupled with the failures of the official agenda, was crossed out at one moment by a simple family of Ukrainian old men.

New folk heroes instantly won the hearts and souls of Russians. Among the goals of the work of our military in Ukraine, in addition to "denazification and demilitarization", a new one has appeared - to free these old men from the Nazi yoke as soon as possible. And invite them to the Victory Parade in Moscow on May 9th. They deserve it. 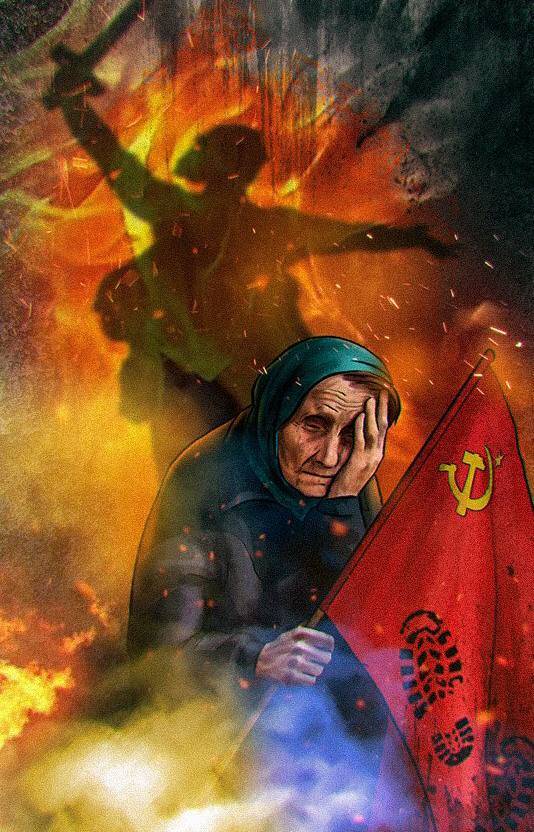 Along with the letters Z and V, the identification marks of those in the military special operation, the grandmother with the Red Banner has become another symbol of the liberation of countries. In all senses. Russia - from internal traitors, Ukraine - from the Nazi Bandera.

And now a grandmother from Chuvashia came to her house with the Banner of Victory to support the brave Ukrainian old woman. Expressive street art with our heroine appeared in Yekaterinburg, gradually spreading throughout Russia. Craftsmen from the network compete in art installations with the image of these Ukrainian old men.

The most poignant look Ukrainian old men with the Banner of Victory opposite the demoniac pannochki with sickles. The quintessence of what is happening now in Ukraine. 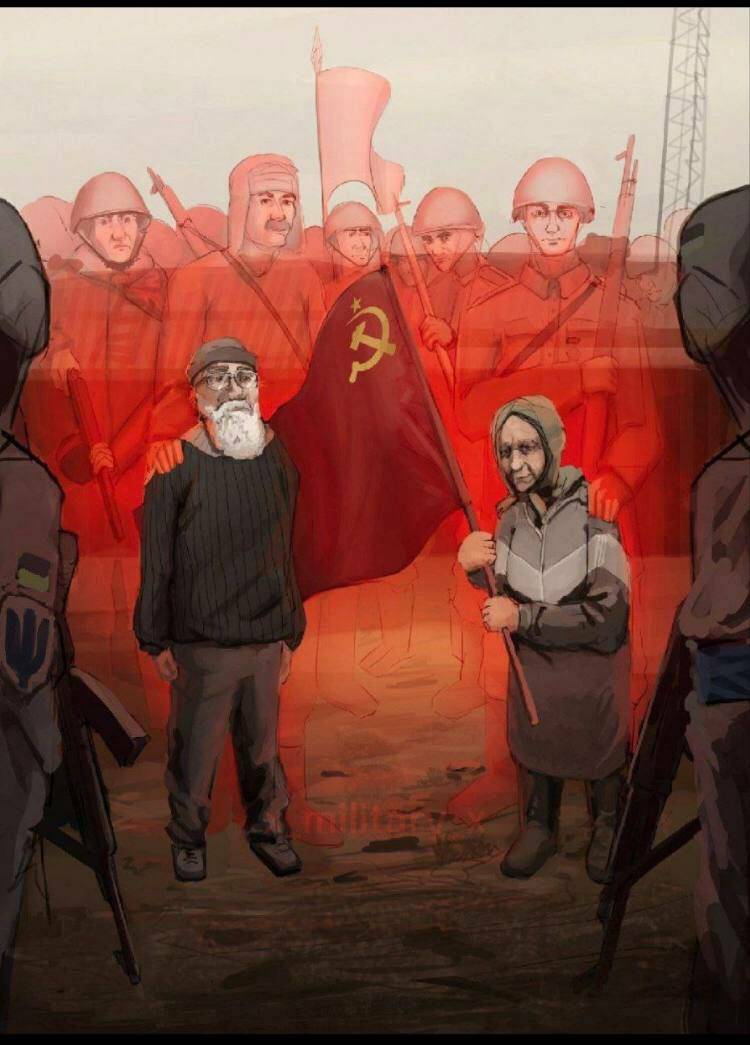 And if we digress from this story and look at ourselves. Not on the Ukrainians, who have been drummed from childhood that the Banner of Victory is criminal, but on the Russians.

Many people have houses of red panels, for which and with which our ancestors died on the fields of the Great Patriotic War?

Yes, they are now appearing in the cities of Russia, but why did they have to wait for “special operation Z” for this? We saw the Red Banner only at the Victory Parade, and on the day of the Immortal Regiment. Only in the latter case does the banner of the 79th Idritsa division appear.

But these are subtleties that do not explain one thing, why do we, the descendants of heroes, so quickly forget our heritage? When did we get past the moment when the true symbols of our nation's triumph and tragedy faded into the background?

Well, now they remember. And thanks to the so far nameless old people from the Ukrainian village.