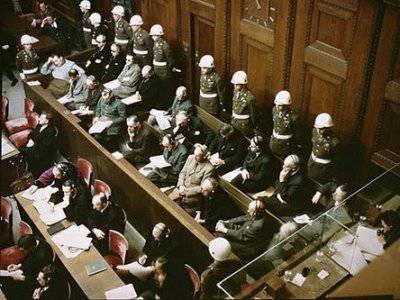 It's all very easy to figure out when it is black and hot, good and evil, cold and hot. However, not always, even using all those sense organs and minds that nature has bestowed on man, one can understand what this or that phenomenon represents that has grown on Russian soil. One of these controversial recent issues is the fight against Nazism and fascism, which are manifested to one degree or another on the territory of Russia.

We can say, well, what is there to understand: there are fascist scumbags who trampled on the memory of our ancestors and now appear on the streets, attacking objectionable and writing walls with chauvinist slogans with the indispensable signature “88”; and there are people who, apart or within some kind of intra-social integration, try to fight with such scumbags, to resist the manifestation of the new brown threat in the country, which at one time smashed this threat to pieces.

Apparently, until recently, the Russian Foreign Ministry also believed, therefore, he allowed himself to allocate substantial grants to public organizations that self-position as ideological fighters against the Nazi evil. But it turned out that not everything is so simple in this world. The scandal broke out where it least expected.

The Russian Ministry of Foreign Affairs is a grantor for such a public organization as the international human rights movement “MBN (World without Nazism)”. Already by its name, this movement makes it clear that it is struggling with Nazism, and therefore it can fully count on financial assistance from the foreign ministry of a country that has its own Nazism and fascism. historical abacus.

So, quite recently, a program was passed through one of the Latvian television channels, in which very interesting remarks were made by the deputy chairman of the movement “World without Nazism”. This man’s name is Valery Engel, and they invited him to a Latvian TV channel to comment on the opening of a monument to Latvian SS legionnaires in the Latvian town of Bauska.

As befits a functionary of a social movement aimed at fighting Nazism, Mr. Engel at first extensively discussed the subject of the fact that so-called state Nazism was cultivated in Latvia, which, in his opinion, is obviously unacceptable. But behind the lengthy conversations Valery Viktorovich unexpectedly declared that, by and large, the crimes of communism, which served as the ideology of the Land of Soviets, were absolutely no different from the crimes of Hitlerism, which means that it is necessary for the communists-criminals to conduct their own analogue of the Nuremberg process. This personal opinion of a single gentleman could have been completely ignored, but Engel in the program of the Latvian television was represented by the public organization World Without Nazism, and not his modest persona in person. Moreover, just a couple of minutes before announcing the need to convene Nuremberg-2, Mr. Engel said that one cannot put a sign of identity between communism and fascism ...

In this regard, the speech of Valery Engel makes a strange impression. Apparently, pointing out that the sign of identity is not appropriate, Valery Viktorovich wanted to demonstrate his loyalty to the official Russian position, because, after all, MBN works, among other things, on grants from the Ministry of Foreign Affairs of the Russian Federation. But then Mr Engel, either forgetting what he spoke a moment before, or forgetting that he is not represented on the screen by a private person, said that he was completely convinced that the Communists should be judged as well as the Nazis the rules of the Nuremberg Tribunal. Striking inconsistency in a single transfer.

Suppose that at the moment when Engel spoke the words about Nuremberg-2 for communist criminals, he expressed his own point of view and nothing. But in this case, this public figure, obviously, should understand that spreading this kind of idea is uniquely aimed at a public explosion in Russia. Moreover, Nuremberg-2, about which Valery Engel spoke, will serve as a pretext for new financial and territorial claims against Russia, as to the successor of the USSR, from a number of states that consider themselves to be victims of communism. It turns out that within the framework of one program, the deputy chairman of the “World without Nazism” movement managed to stigmatize the Latvian state Nazism and at the same time give this kind of policy a chance to catch its fish in the dark water in terms of new accusations against Russia. After all, it is obvious that the same West is always ready to put an equal sign between the USSR of the Stalin era and modern Russia. And for the Russian opposition it will be a gift of unheard-of generosity from where they didn’t expect at all.

For obvious reasons, even the talk about Nuremberg-2 for Stalin’s criminals is an excellent reason to request payment from Russia “for moral damage” from any country of the former socialist bloc, as well as from the former Soviet republics. As it was said, they got it from Germany, why not take the opportunity to get it from Russia, especially since such a thought is expressed by a Russian citizen, a public figure, a person who, through the organization "MBN", is financially supporting the Russian foreign affairs agency. It turns out that such a struggle against Nazism happens ...

Obviously, to somehow isolate the MBN from what Mr. Engel, head of the World Without Borders movement, Boris Spiegel, has said on Latvian television, hastened to publish material that carries the idea of ​​convening the new Nuremberg process. In particular, Mr. Spiegel writes:

We believe that the calls to convene the “Nuremberg Tribunal” over communism are aimed primarily at separating European states, undermining the European security system. MTD “World without Nazism” supports good-neighborly relations between European countries for their closest cooperation in all areas of human activity.

After such a statement, it becomes completely unclear how two people with so diametrically opposed views direct one social movement ... One sees the root of evil both in Nazism and communism, the other declares that the “World without Nazism” regards such statements as provocation.

By the way, to all the above, it is worth adding an interesting remark by Valery Engel, which is published on the MBN website. He, reflecting on the opposition rally on Sakharov Avenue in 2011, says, in particular, the following:

My first reaction is that if Putin leaves tomorrow and those who spoke on 24 on the square (Tor, Krylov, Akunin, Nemtsov, “VO”) come to power, first, they will distort themselves because they have no ideology, and secondly, they will tear the country apart.

Ideology, apparently, Engel does not see the opposition, but judging by his statements on Latvian television, there is no such (ideology) that the MBN movement has. It is no longer clear who the ideology is actually the ideological movement, whose deputy leader is Valery Engel: against the Nazis, the Communists, the opposition, or simply creates the appearance of social activity, mastering state funding and not really worrying about the consequences of his work ...