Shifts of "Satan" and "Minuteman" take up a combat post 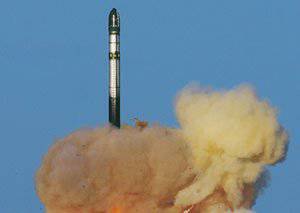 Theme strategic weapons in non-nuclear equipment and the influence of this factor on the process of reducing nuclear weapons covers many aspects. It seems that for Russia this topic is no less important than the PRO issues that are often discussed in the media. However, despite its extreme relevance, it is still little studied and, unlike what happens in the United States, is rarely discussed in the Russian expert community.

What is the relevance of this topic? You can specify several related reasons.

The development of non-nuclear high-precision weapons has reached such a level that the question of a gradual replacement of the function of nuclear deterrence by non-nuclear is seriously being discussed.

It would seem that non-nuclear precision weapons play a positive role, helping to reduce the role of nuclear weapons, and, consequently, their reductions. However, the opposite trend is seen. The overwhelming advantage in conventional weapons of some states is prompted by the desire of other states to possess nuclear weapons in order to preserve their sovereignty and pursue an independent policy, and thus undermine the foundations of the nuclear non-proliferation regime.

Reducing the role of nuclear weapons in strategic deterrence by increasing the emphasis on non-nuclear high-precision weapons can also lead to undermining strategic stability, and not to strengthening it. In this regard, it is often argued that the use of such means as ICBMs or SLBMs in non-nuclear equipment can provoke a nuclear response in response, since these missiles cannot be distinguished from nuclear ones.

Sometimes, precision weapons are not considered as a substitute for nuclear weapons, but on the contrary, as an element that increases the credibility of nuclear deterrence. For example, there is an opinion that “a convincing threat of using high-precision long-range carrier with a warhead in conventional equipment could become the basis of a“ pre-nuclear deterrence ”system that complements the nuclear deterrence system” (A. Kokoshin, “Nuclear conflicts in the 21st century (types, forms, possible participants "), M .:" Media Press ", 2003). In the September issue of the Bulletin of the Atomic Scientists for 2012, an article was published on the nuclear doctrine of the People's Republic of China. The authors believe that Chinese ballistic missiles in non-nuclear equipment are deployed precisely to perform this function.

The qualitative leap in the development of high-precision non-nuclear weapons is beginning to raise concerns about the survival rate of declining strategic nuclear forces. In open publications, scenarios of a preventive disarming strike on the Russian strategic nuclear forces are considered, in particular with the use of non-nuclear sea-based cruise missiles. Since non-nuclear precision weapons are beginning to acquire counterforce capabilities, it seems reasonable to raise the question of the need to take this factor into account with further reductions in strategic offensive arms.

Some types of non-nuclear weapons had previously been the subject of agreements between Russia and the United States to reduce strategic offensive arms, and they were subject to restrictions and transparency measures. Currently, there is a tendency to withdraw such weapons from restrictions.

The most striking example is the B-1B heavy bomber. This type of weapon is no longer subject to the START Treaty. Restrictions on B-1B basing areas outside national territory also ceased to operate, and the United States are no longer obliged to notify on movements of this type of bombers.

At the same time, it is known that heavy B-1B bombers currently carry the main load aviation in Afghanistan. They delivered more than 60% of the bombs and missiles used there on ground targets. There are plans to increase the role of TB-1B in the Pacific region and to this end, deploy some of them at the US air base Guam. It is also known that from next year the full-time operation of the V-1B, armed with the JASSM-ER type ALCM with a range of more than 500 miles, will begin. In terms of the START Treaty, these types of cruise missiles refer to long-range ALCMs.

This term has become increasingly used, but so far there is no unity of views as to what types of weapons should be considered as such. Experts agree only that non-nuclear ICBMs and SLBMs are strategic weapons. According to the position of the US administration, the weapons systems developed under the “Fast Global Strike” program will not be covered by the new START Treaty, and therefore cannot be considered strategic. The Russian side, as is known, has the opposite point of view.

With regard to those existing systems that are no longer the subject of a new START Treaty, there is no unity even in the Russian expert community. There are also different opinions regarding long-range air and sea-based cruise missiles.

THERE ARE AND OTHER QUESTIONS

As is known, during negotiations on the “old” Treaty on START, the Soviet side tried to limit the secretive anti-submarine activity and proposed measures on how to do this. The same theme was heard at the stage of negotiations on START-3 at the end of 1990. Does it continue to be relevant in the light of the fact that Russian submarine missile carriers, as before, perform tasks to ensure nuclear deterrence and, apparently, American multi-purpose submarines, like during the Cold War, are trying to monitor them? Moreover, judging by the plans for the construction of the Armed Forces, the Russian naval SNF is waiting for a radical update, since the defense sector has been tasked with building eight new strategic submarines armed with the latest Bulava missile system by 2020.

If the topic of restricting anti-submarine activities is still relevant, should multi-purpose nuclear submarines be considered carriers of strategic weapons in the usual equipment? Should their anti-submarine weapons (non-nuclear torpedoes or torpedoes) be classified as strategic? In addition, as is well known, the DARPA agency of the US Department of Defense is developing remotely operated submarines, which are designed to detect potential enemy submarines and covertly monitor them for a long period. Is it also a strategic non-nuclear weapon?

As is known, Russia adheres to the position that the problem of reducing non-strategic nuclear weapons can be discussed only after the US nuclear bombs have been withdrawn from Europe. It has been repeatedly emphasized that Russia views these weapons as strategic, since the approach time of the tactical aviation of the NATO countries armed with these bombs to the Russian areas of deployment of strategic ICBMs is a few minutes. Should it be understood in such a way that if powerful non-nuclear bombs and air-to-air missiles possess counter-force capabilities against mining and mobile ICBMs, then being deployed at NATO tactical aviation bases in close proximity to the borders of Russia, they will also be considered as strategic weapons in non-nuclear equipment?

As is known, anti-missiles for the missile defense system of the territory of the United States and its allies will be equipped with non-nuclear kinetic warheads. Do these missile defenses also belong to strategic non-nuclear weapons? Or should it be necessary to separate strategic offensive and defensive weapons in non-nuclear equipment and consider the problems associated with them separately?

In the opinion of the author, it is hardly necessary to mix these two categories. Nevertheless, it appears that the Russian position on missile defense would become more consistent and convincing if it were voiced in conjunction with the problem of strategic weapons in non-nuclear equipment. For example, Russia declares the need for guarantees that the ABM will not be directed against the Russian SNF. And how can a missile defense system, being defensive, be directed somewhere? What is the scenario of its use against the Russian strategic nuclear forces? The one in which the first blow is delivered by the Russian strategic nuclear forces? It is more likely to assume that this is a hypothetical scenario, when the United States and NATO are delivering a disarming strike with non-nuclear means, and their missile defense system is assigned to intercept Russian strategic missiles that have survived the first strike. Then why not emphasize this idea explicitly? In any case, there would be a strong argument against the statement that seems today obvious to Western audiences: Russian fears are exaggerated, because the limited number of antimissiles in Europe is clearly not enough to neutralize the many times greater number of Russian strategic nuclear forces.

The list of types of weapons that can be considered as strategic non-nuclear weapons is not limited to this. Opinions are expressed that they should also include support systems, including space reconnaissance and target designation systems, anti-satellite weapons, attack unmanned aerial vehicles, and even cyber-weapons.

Obviously, if the Russian side wants to make progress in the further reduction of nuclear weapons, then this list will have to be limited by defining priorities. At the moment, it seems that the list of priorities includes only ICBMs and SLBMs in non-nuclear equipment, as well as types of weapons that are being developed in the United States as part of the Fast Global Strike program. As is known, the current US administration has completely abandoned plans to deploy conventional warheads on ballistic missiles. Armaments for a “fast global strike” are still at the stage of research development, which can last for more than a decade. For this reason, there are big doubts that they pose the greatest danger to the survival of the Russian strategic nuclear forces in the foreseeable future, unlike SLCMs and long-range ALCMs. The latter are constantly being upgraded and acquire qualitatively new opportunities mainly due to the improvement of ammunition and providing reconnaissance and targeting systems.

It is unlikely that the problem of strategic non-nuclear weapons can be solved by introducing new contractual restrictions. Apparently, the way to solve it is to increase transparency and make unilateral obligations. American non-governmental experts are already actively discussing this issue and are proposing concrete measures to reduce the concern of the Russian side about the increasing potential for non-nuclear strategic offensive weapons. Are Russian experts ready to discuss these measures? So far there is no such sensation, and this circumstance once again confirms the relevance of the topic under discussion.

Author:
Evgeniy Vladimirovich Myasnikov - Ph.D. in Physics and Mathematics, Director of the Center for the Study of Arms Control, Energy and Ecology
Originator:
http://nvo.ng.ru