Expert: "If the Germans can be united in one state, then why can not this be done by the Russians?" 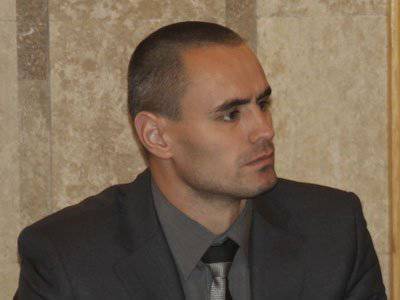 "The initiative to collect signatures for the unification of Ukraine, Russia and Belarus, which started in the Moscow church of St. Nicholas on the Three Mountains, suggests that our people are still strong historical continuity of generations, the feeling that Great Russians, Little Russians (Ukrainians) and Belarusians are one nation, "a Ukrainian political analyst, columnist for the newspaper Rush Hour, a member of the expert team of the foreign affairs publication International Life, told a REGNUM correspondent on September 27 Center for Conservative Studies, Lomonosov Moscow State University Vladislav Gulevich.

Recall, on 21 of September, the collection of signatures for holding a referendum on the unification of Russia, Belarus and Ukraine was launched in Moscow. Archpriest Vsevolod Chaplin, the head of the Synodal Department for the Relations of the Church and the Russian Orthodox Church of the Russian Orthodox Church, Archpriest Vsevolod Chaplin, is open for signing a charter on the reunion of Russians, Belarusians, and Ukrainians in the Church of St. Nicholas on Three Mountains. The charter can be signed by anyone. "We, the heirs of a thousand years of history and a great civilization, the experience of building, good neighborliness, military valor and cooperation of our ancestors, united by a common culture and joint activities to equip and protect our land, when reunited, we will take all the best from the practical experience of our people," says in the document.

According to Gulevich, the criticism of collecting signatures for holding a referendum on the unification of Russia, Belarus and Ukraine has already been voiced, often unfounded: “The spiteful comments of individuals who defy this initiative show that certain circles do not like it. They are touched by their arguments: the church should be separated from the state, the collection of signatures is absurd. Commentators, thus, demonstrate their intellectual dependence on common secular dogmas and primitive cliches. "

"Who separated the church from the state, who deprived the state idea of ​​the sacral dimension, giving it a petty-utilitarian and vulgarly secular character? Western positivism and its political brainchild - liberalism. Many" experts "do not even have enough breadth to see their own intellectual slavery and the uncritical perception of the propaganda clichés that are getting cheaper. After the collapse of the USSR, many people are so used to bowing to Western political thought that they continue to do so. Their entire political discourse is colored in the colors of the American flag, "continued Gulevich." And many critics of the idea of ​​the unity of the three fraternal East Slavic republics sing according to the notes prepared in advance, because they do not know the other notes, but they cannot write their own. A firm conviction is created that these so-called "critics" they work for Western agitprop. They bring up opponents of consolidation and unity in the camp of their own likely adversary — the highest ideological aerobatics, and, we recognize, the West succeeds in this. When many experts open their mouths, it seems as if Voice of America or Radio Liberty spoke. Where is the independence of thinking? Where are their own geopolitical meanings? They are not. Instead of primitive epigonism, repetition of “pseudo-truths” imposed in the teeth, a la Zbigniew Brzezinski. "

Gulevich believes that the criticism addressed to the initiative to collect signatures for holding a referendum is relevant only in the context of ways to implement it, but not in essence the idea itself, since "the idea of ​​holding a referendum on the unification of Russia, Belarus and Ukraine is geopolitically and economically justified." The Ukrainian political analyst said: “If the Germans can be united in a single state, why can't the Russians do this? And the Russians, I remind you, are Great Russians, Little Russians, and Belarusians. Refusing the politonym“ Russian ”does not work for us. It creates temptation for many, greedy for third-party suggestions, change their nationality to a new one, like a dirty shirt. "

"This is especially felt in Ukraine, where they are trying to keep quiet about the Western Russian heritage. After all, the most Russophobic region of the country - the Western Ukrainian regions - was the scene of a tough confrontation between the Western Russian idea and the Austro-Hungarian Empire, which in its struggle with the Russian self-consciousness of local residents relied on Ukrainophiles, “Regularly running with denunciations to Austrian gendarmes,” noted Gulevich. “But Ukrainian schoolchildren and students do not know about this history of the Ukrainian movement. Not supposed to, despite the freedom of speech and other beauty stems phrases - otherwise instead of critics and supporters scoff appear resistant all-Russian unity. "

As reported by REGNUM, a number of Belarusian and Ukrainian public figures and experts positively responded to the initiative to collect signatures for holding a referendum on the unification of Russia, Belarus and Ukraine. Commenting on the initiative, September 10, Ukrainian politician Spiridon Kilinkarov said: "But I know that sooner or later we will all be together. And I am sure that Ukraine has no future with the European Union. The future of Ukraine can only be in a single economic space, Eurasian the union, the Customs Union of Russia, Belarus and Kazakhstan. Our interests are there. We absolutely need each other equally. The sovereignty of Russia and Ukraine is the same as the sovereignty of the kidney and liver in one organism. "

Commenting on the initiative, 27 of September, Ph.D. in History, Chairman of the Minsk Society of Russian Culture "Rus", Valentina Teplova, said: "The historical past proves that the union of Russia, Belarus and Ukraine provides economic, political and cultural prosperity of our peoples."