Let us examine the article "At the exercises" Kavkaz-2012 "a soldier was killed, two were wounded"

October 1 2012
30
A stormy discussion of another Izvestiya article began on the Internet, where the failed results of the Kavkaz-2012 exercises performed by the 19 bsbr were mentioned. Users exclaimed: "After this article, the feeling remains that some kind of collapse in the army, not an improvement," forgetting that one thing can be written on the fence, and there is actually firewood. Today I spent on figuring out what was true in the publication of Izvestia, and what about fables. As you remember, I was twice in the 19 Brigade, I have friends there, and in this record will be comments from one of the brigade officers to the above article. The officer was directly involved in the exercises at the Rayevskaya training range from the beginning to the end.

I am analyzing the article "On the exercises "Kavkaz-2012" killed soldiers, two injured" the points:

During the Caucasus-2012 exercises, the 19th motorized rifle brigade deployed in Vladikavkaz lost three soldiers - one was killed and two were seriously injured. In addition, the equipment was irretrievably lost - one T-90 tank, one BMP-3 and one autotractor. Another seven infantry fighting vehicles, tanks and cars require a long overhaul.

This is tales. One soldier was killed and one BMP needed to be repaired. Read below for details.

- The contractor died from careless handling of a grenade from an RPG-7. The grenade exploded in his hands. And two conscript soldiers were caught in the cab of the auto-tractor on the march, ”an officer in the control of the Southern Military District told Izvestia.
The brigade column advanced to the border with South Ossetia. A KamAZ tractor pulled a trailer with a BMP-3 without a crew, and the driver of the tractor failed to cope with a difficult mountain road. As a result, the tractor and the trailer overturned and fell into the abyss. Also on the march the Ural tank truck was lost.

The anonymous man hiding under the phrase "command officer of the Southern Military District" is lying. The contractor died not at all because of careless handling of an RPG-7 grenade, but because the devil pulled him to pick up an unexploded NURS after aviation shooting. Background. The brigade arrived at the "Raevskaya" training ground in August, and the personnel began to equip positions, establish a target field. Every day, instructions were given not to touch unexploded ordnance, of which there were quite a few at the range. The deceased contract soldier was a member of the Tarskoye polygon team (Ingushetia); was perfectly aware of safety measures in such cases. Nevertheless, for some reason he raised the NURS, it exploded, the soldier was mortally wounded, after which he died the next morning. Nobody else was hurt during the exercise.
About avtyagagach. You are not puzzled by the phrase that the brigade column during the exercises for some reason, is being advanced to the border with South Ossetia, although it is necessary to go completely in the opposite direction to the Krasnodar Territory? That's right, because the case is described after the end of the exercises, when a completely different task was performed. And not a brigade column rode, but a battalion. That is, these incidents have nothing to do with the teachings, but they are draped for wit, in order to create a general atmosphere of eeriness.

According to the officer, the loss in technology began in the brigade before the start of the exercise. At the point of permanent dislocation, three T-90, 20 BMP-3 tanks and almost all engineering battalion engineers remained inoperative. Since the engineering units are the best equipped with the equipment, the whole battalion's lack of readiness (about 50 units) caused the organizational conclusions of the command.

Lies. Sappers with equipment left for training and participated in the arrangement of positions. In the brigade, one of the motorized rifle battalions remained for service, the BMP of which, probably, was attributed to defaulter for breakdowns.

Tanks and armored vehicles broke down at the stage of preparation for the exercises. On one BMP, the engine was completely disabled, one tank was dropped from the trailer under the bridge, as a result of which the tower was blown off, internal equipment and the engine were broken (cannot be restored), and two more tanks had guns broken. This happens if the tank pokes a gun into the ground on rough terrain. The ground is hammered into the trunk, and at the first shot it breaks, as in the movie “White Tiger”.

Reading this paragraph, I realized that I was experiencing deja vu, and I was not mistaken. In the blue eye, all the accidents with armored vehicles that took place in the brigade over the past few years are written here. Thus, the tankers drew the ground with their trunks during firing on the move at the Tarskoye range more than 2 years ago, moving under difficult terrain conditions. The tank fell from the bridge a year and a half ago. Why aren't examples of the times of the Great Patriotic War given? It would be possible to draw a picture of a complete Armageddon.

In the course of the exercises themselves, the fighters sank two BMP-3 while crossing the river. They were taken out with the help of tractors, but the depth was such that one armored vehicle received a hydraulic shock. Now you can restore it only at the factory.

There is no river, dreamers, the crossing was over the lake. Crews for the first time overcame a water hazard, as a result of inexperience of drivers, the 2 BMP-3 really drowned. People are not affected. Both cars are naturally raised. One car remained in service, it only needed to change the oil, another young driver forgot to drown out, as a result of which the engine suffered.

At the stage of combat shooting, the driver mechanics killed the engine of his BMP. He did not check the plug on the oil tank, the oil leaked out, and the fighter started the car and hit the gas.

My friend has no idea about this case.

Next are irrelevant comments. Unfortunately, some publications news they cook like in a famous joke: - Is it true that our Abramchik in a casino won a million in preference?
- True. Only not in a casino, but on Privoz. And not in preference, but in point. And not a million, but five hundred rubles. And did not win, but lost.
The sensation is created, people shaval, the rating has grown. I remember about the teachings in Kamchatka, too, they composed a lot of things, but there the liar got very stupid, and the lie was poorly disguised. Here they acted smarter. In general, the age of information technology has led to the fact that the cover-up struggle in military circles began to spill out in the media. It is curious whether Alexei Gaidai, a fake war veteran, is not here even leaving his mark?

For vehicle breakdowns and accidents. For some reason, many non-serving people get the impression that no emergency should take place in the army. On a civilian, one or another aggregate on personal equipment and machinery of enterprises often fails, but does this not bother anyone? Also, everybody knows that every day hundreds of accidents, big and small, occur in the country, so why shouldn’t they be in the army, where people like you are driving? Only often younger and with less driving experience. Soldiers learn to manage complex equipment and in the process of studying an inevitable nth percentage of accidents and breakdowns. This is normal. No one wants to sacrifice, they try to avoid them in every way, but sometimes they do happen. After all, this is life, and not some abstract vacuum.

Not about the article, but about the teachings. From this year on, the delivery of personnel to the training place is practiced not by vehicle technology, but by buses. The equipment arrives at the landfill by rail or by car. Thus, its lifespan is saved, and people travel many hundreds of kilometers in comfortable conditions.
At these exercises, the fighters were fed civilian chefs from an outsourcing organization that serves the brigade in the PDP in Vladikavkaz. Fed, according to a friend, very well.
The brigade arrived a month before the start of the exercise, set up positions and held several rehearsals for the maneuver defense of the formation. My friend says that the soldiers got a wealth of experience in engineering equipment of positions, shot a lot, were engaged in tactics, and learned how to operate equipment afloat. In the course of training, the scenario of the exercises was changed several times, the units received new tasks, so all the personnel worked on these or other actions in defense and counterattacks. 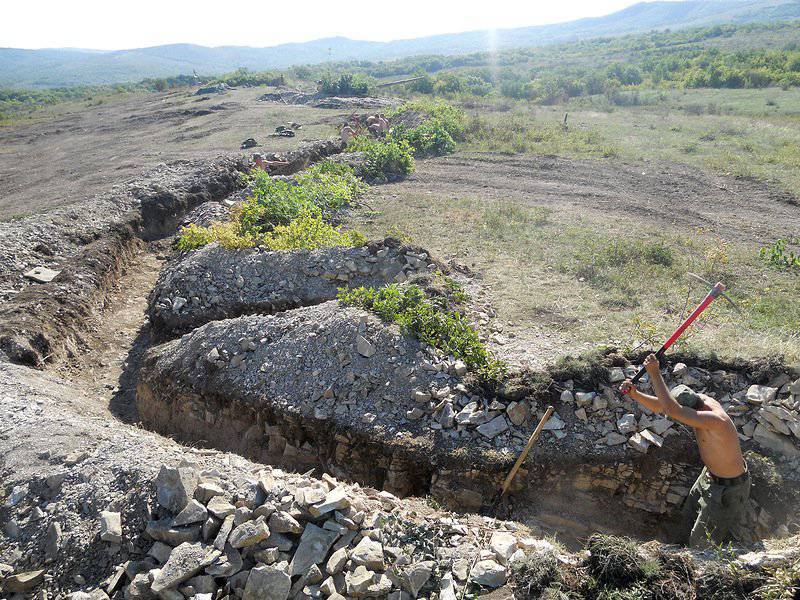 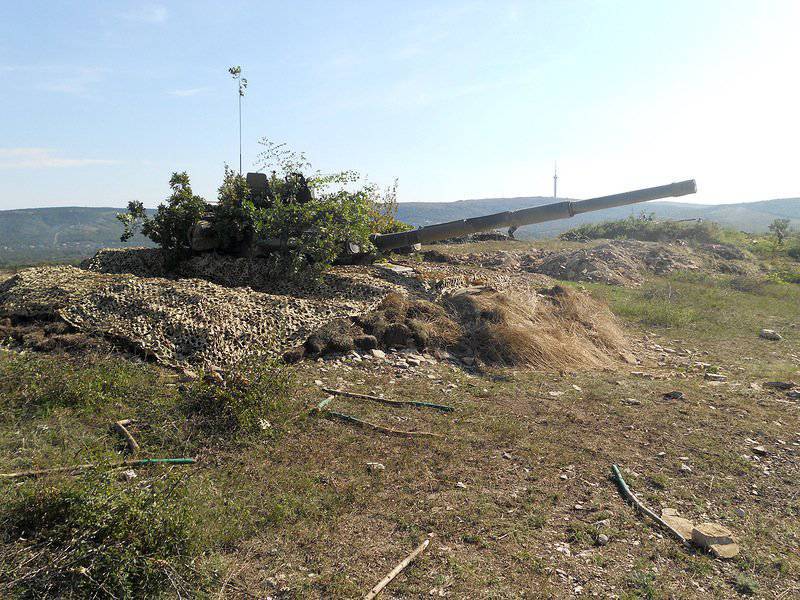 Preparing cars for crossing the lake 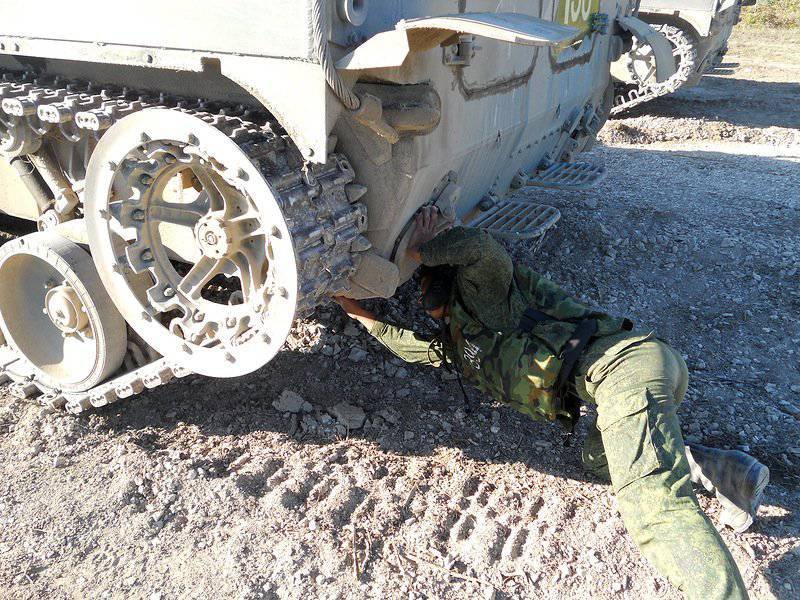 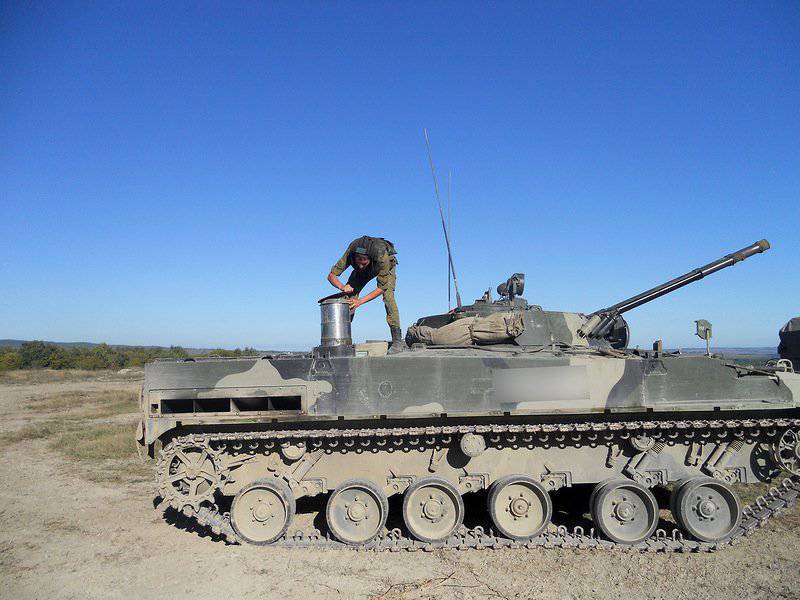 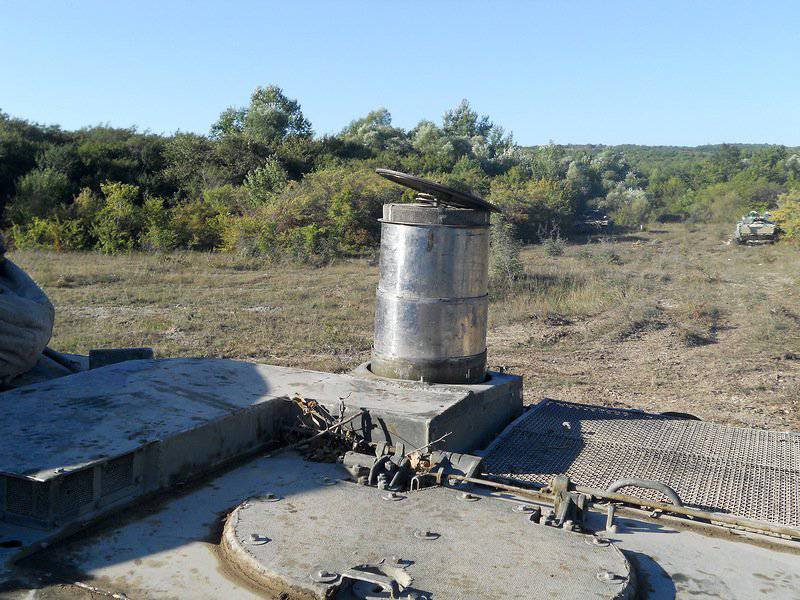 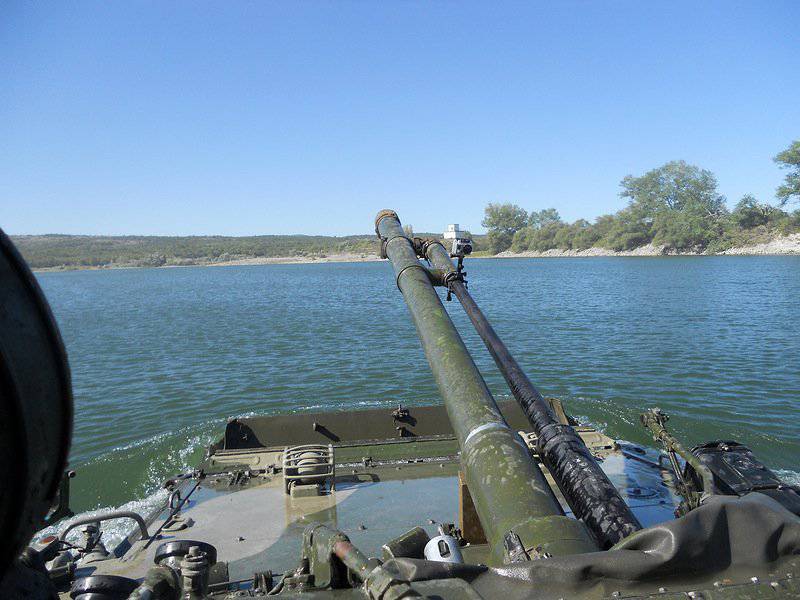 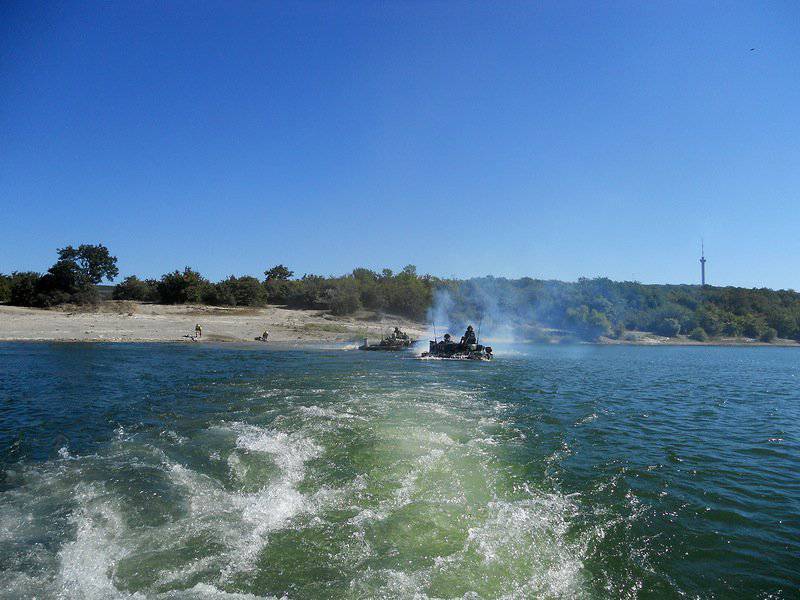 One of the episodes of the teachings 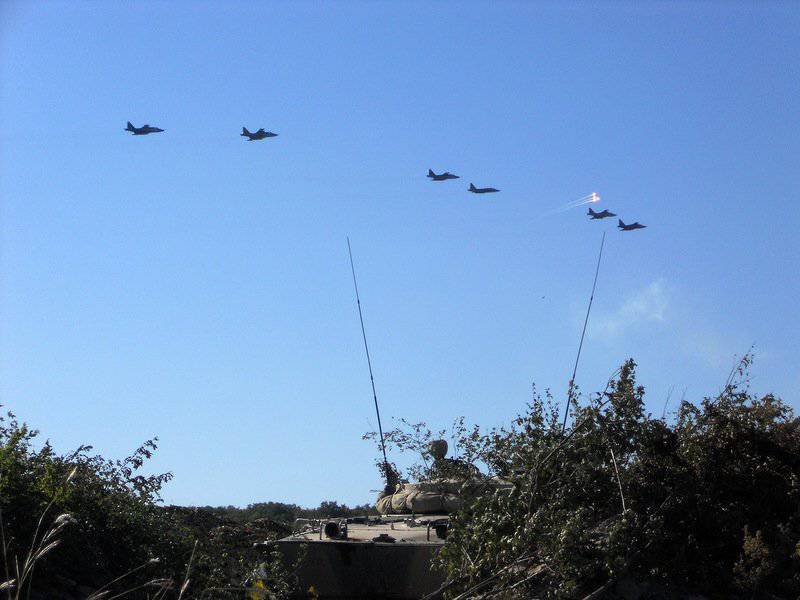 Regarding the non-strategicity of strategic exercises. They say that the troops had to disrupt their permanent deployment, give them an unexpected task, and constantly change the introduction. This is not done for many years. If anyone can recall such teachings for the past 20 years, then please unsubscribe in the comments. Security issues and “how-to-do-nothing” negated such training. If you do not know what will happen at each stage, then there is a great chance that they will open fire at the wrong time and someone will be in the line of fire. Someone crushed during the night march. Someone stumbles, falls into the water and drowns. Losing public opinion now does not forgive. And high command too. You killed a soldier, so hang yourself: "How did you allow this? To deprive of a premium! Dismiss! In court! And a company, and a commander!". Better to be safe.
Equipping the army with computer simulators, where you can simulate battles within a brigade, laser simulators of shooting, will help solve the problem. Now at the landfill in Mulino is building the first training center, equipped with these technologies. In the future, such centers will appear on all landfills. In the meantime, we will have non-strategic strategic exercises.