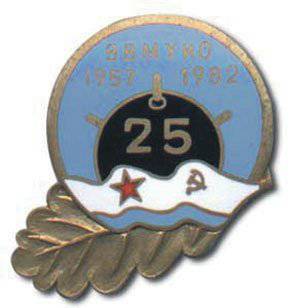 The energy of development of higher education, including military, is borne by innovative universities, emerging on the basis of the oldest universities. These include the Moscow Institute of Physics and Technology (MIPT), which was founded in 1951 for the mobilization of defense science. At the same time with the new trends of war at sea, the Higher Naval School of Weapon Engineers was established.

History These universities reiterate the pattern of returning on a new basis to the age-old traditions of the content of national education, making its way through the militant ignorance of the training administration bodies.

In the post-war period, the tragic lessons of forcing minefields, explosions of ships in non-contact mines, defenselessness from self-guided acoustic torpedoes, weakness of anti-mine and anti-submarine defense of warships and transport ships were still fresh.

Given the urgency of the problems of testing and acceptance, storage and disposal of millions of tons of ammunition, there was an acute need for weapons engineers - highly skilled operators, testers, military technologists at factories, research institutes and design bureaus, specialists for warehouses and arsenals. At the same time, it was thought that the weapon engineer should be a ship officer and perform the functions of the commander of a ship of warfare rank IV.

The basis for the creation of the Higher Naval School of Weapon Engineers (VVMUIO) was the open 1 of October 1948 of the year in the VVMOLU command team. Frunze engineering mine-torpedo department with a training period of five years and six months. He was led by Hero of the Soviet Union, Captain I rank Abram Sverdlov.

The foundation of the WSIS is associated with the name of the People's Commissar of the Navy of the USSR, Admiral fleet Soviet Union Nikolai Kuznetsov. In 1946, at a meeting of designers, he noted the need to use “the latest achievements in the field of science and technology: cybernetics, electronics and atomic energy. Kuznetsov was able to realize these ideas as the head of the naval educational institutions in addressing the organization of training for weapons engineers.

With the reinstatement of Kuznetsov as the Commander-in-Chief of the USSR Navy in 1951, VVMU weapons engineers (like the MIPT) acquired an independent status and transferred to full-scale training of specialists in all types of fleet weapons. Rear Admiral Vladimir Egorov, a prominent specialist in the field of naval artillery, became the head of the school. The school was transferred to the largest building in Leningrad - the Palace of Soviets. In addition to the mine and torpedo, artillery, rocket (rocket) and chemical faculties were housed here. Later the hydrographic faculty was added to them.

The algorithm for training a weapon engineer combined the requirements for a naval officer with scientific and technical specialists to a broad profile specialist. The solution of the task of integrating education, science and production was carried out by the close connection of departments with scientific research institutes, naval directorates and industry, operational provision of documentation, new models of military equipment, and expertise of foreign weapons and technologies.

The main result of the experiment called VVMUIO was the formation of a universal engineer capable of mastering new knowledge, activities, samples of weapons and military equipment.

The navigators, who “introduced into the meridian” of future leaders and scholars, besides coursework company officers, were junior senior commanders who taught to obey, temper pride, and feel the power of power over people. And, according to the precepts of Admiral Stepan Makarov, to be honored with a high rank - a naval officer, "... to be an aristocrat, but to know the work of a simple sailor."

In most of the memories of graduates of the Higher Education and Liberation of International Music Academy, the ability to mobilize useful knowledge in a critical situation is the creation of an intellectual feedback from reality, which can be attributed to the merit of teachers - true patriots of their disciplines who considered it a goal to prepare a specialist to respond to new threats. The reality of such a threat was manifested in the death of October 29 of 1955 of the LC Novorossiysk. The reaction was the study of the key causes of loss of stability of the ship and the mathematical foundations of oscillatory processes.

Among scientists, the giant is the figure of the chief of the mine weapon department, the Stalin Prize laureate Abram Geyro, who opened a wide field of mine weapon development that could change the geopolitical situation and force the countries with a powerful military fleet to capitulate.

The trend of scientific and technological progress turned the mine into a torpedo, and then into a high-precision weapon - a Tomahawk cruise missile - a replacement for intercontinental ballistic missiles (the Trident-2). Yugoslavia and Libya became a victim of "winged torpedoes". However, today the Iranian minefields in the Strait of Hormuz can neutralize the entire potential of the US Navy.

The principles of the holistic training of a weapon engineer consisted in exorbitant pressure, responsibility education and the search for a new one. The density of the undergraduate program “burned out” lazy and weak in spirit, increasing the reliability of a person at the exit.

A special role was given to the selection of graduation projects where the future specialist was looking for a systemic solution of an sometimes exotic task. In the future, overgrown with knowledge and experience, this solution was sometimes turned into a basic model of a weapon model. What happened after 10 years with the author's theme "Mine guidance equipment, designed against submarines going under the ice."

The diploma work as an educational outcome was provided by a system of practices, including a navigator, where future engineers were refining the knowledge of navigation during the actual laying of the Ural spacecraft, production and design, and shipboard. Understanding the history of naval art and tactics of the Navy helped to get rid of hats in areas that are far from specialty.

The high point of VVMUIO and the entire naval education system was the historic mission to create the Strategic Missile Forces. Where, as a result of the fierce competition of educational technologies, the key heights were occupied by weapons engineers. Among them, the Commander-in-Chief of the Strategic Missile Forces and the Minister of Defense of the Russian Federation Marshal of Russia Igor Sergeyev, the heads of the test site and the main 4 Central Research Institute, universities, commanders of units and formations of the Strategic Missile Forces. The post of commander of the Military Space Forces of the Russian Federation was taken by Vladimir Ivanov, a graduate of the Caspian VVMU. Education allowed weapons engineers to occupy positions of responsibility related to a wide range of nuclear charging devices.

A noticeable trace of the engineers of weapons left in the Navy, laying the foundations of naval strategic nuclear forces. They gave impetus to the development of rocket-artillery, mine-sweeping, torpedo and anti-submarine weapons. They became commanders of surface ships and nuclear submarines, heads of central administrations, research institutes and departments of universities, design bureaus and military missions in industry.

Two commanders of the fleet, the governor, the director of the institute of the Russian Academy of Sciences, academicians, doctors and candidates of sciences, professors, associate professors, laureates of Lenin and State prizes came out of the cadets of the school. With a small number of graduates (no more than 1000 people), this fact serves as an indicator of productivity in the quality training of specialists in the integration of classical naval and engineering education.

At the Plenum of the Central Committee of the CPSU 29 in October 1957, Nikita Khrushchev demanded that instead of “old boats and destroyers armed with classical artillery”, build a submarine fleet armed with missiles. The defeat of the unique educational institution began after the appointment of the Chief of the Navy Sergey Gorshkov in 1956 year. By 1960, all the departments of the VVMME were dissolved in four command schools.

Consequences of the closure of VVMUIS the country is reaping to this day. The cause of the death of the submarine "Kursk" was the loss of engineering traditions by torpedoists and the weak technical training of the command of the Navy, which did not receive engineering education. The result of the lack of specialists in the disposal of ammunition is a catastrophe at the arsenal in Ulyanovsk. Without a forecast for the development of weapons systems, gross errors in rocket production and the deployment of naval ships were made.