The last destroyers of the Soviet Union - the project 956

October 1 2012
19
965 project destroyers, Sarych cipher, Sovremenny class destroyer NATO - 3 destroyers of the “Modern” type. The last destroyer of Soviet construction. The ships were built for the Navy of the Soviet Union, the last ships were completed for the Russian Navy. The remaining unfinished ships due to financial problems were sold to the Chinese Navy and completed at the Russian shipyards. 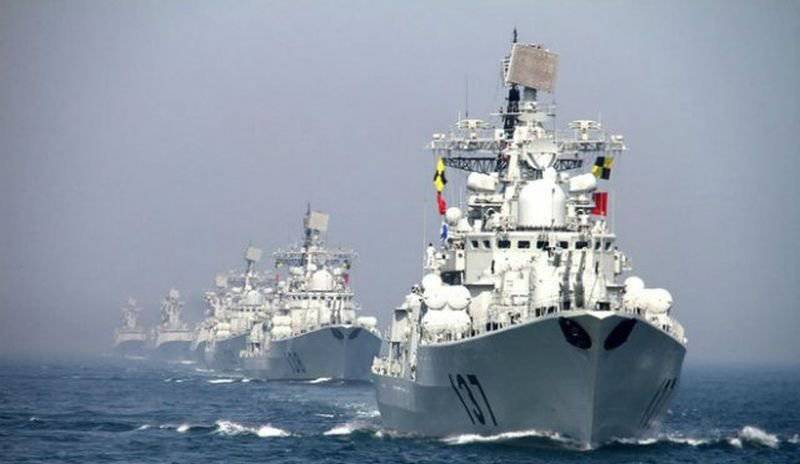 In 1960, the Soviet Union had an acute need for large ships, since the Navy began to actively go to the World Ocean, replenished with middle-class ships and serve in the ocean zone.

In addition, the destroyers with 130mm artillery and the 68-K \ B artcruiser of the projects reached the deadline of operation and did not have modern weapons - the anti-ship missiles. It becomes clear to all that such tasks cannot be performed using only a certain class of ships. Multi-purpose ships, equipped with modern types of artillery and rocket weapons, were required — squadron destroyers were required. 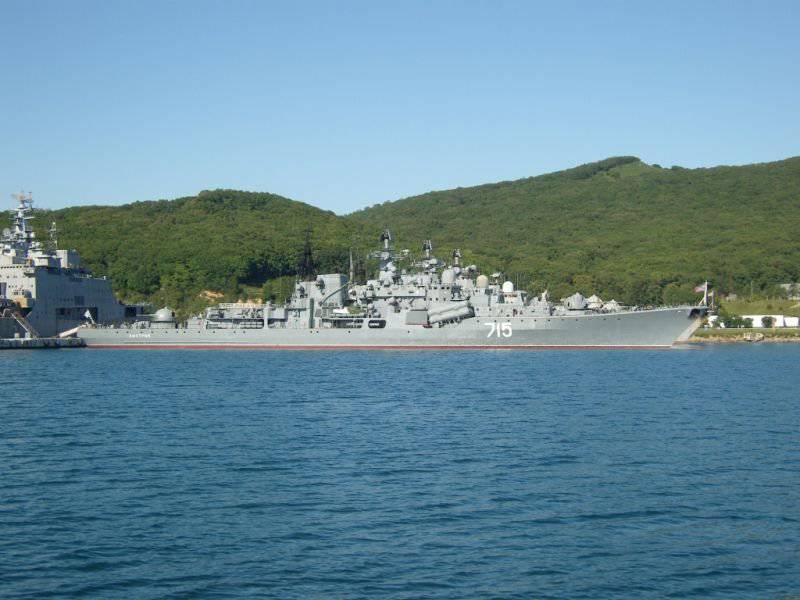 Home stories 956 project destroyers - Resolution of the Council of Ministers of the USSR and the Party Central Committee No. 75-250 of 01.09.1969. In the first task of operational-tactical significance, the new ship was called the fire support ship for the landing squadrons and, additionally, for joint operations with the BNC of the 1155 project. a bunch of EM - BOD was supposed to outperform (theoretically) a pair of EM "Sprewens" (USA).

The pre-sketch project (avanproekt) was commissioned to develop the Leningrad TsKB-53. In the course of development for the ship, more and more new tasks were determined, which required the designers to perform a multivariate project execution. Considered various types of combinations of weapons and power plants. Due to the capacity of the planned shipbuilder (the plant named after A.Zhdanov), the overall dimensions did not exceed 146 meters in length and 17 meters in width. On the basis of works on the advance project, they begin to develop a draft design.

According to the contract number 927 / e / 1017-71 between the Navy and the Central Design Bureau-53, the development of the EM designation under the 956 number and the Sarych cipher begins. A thorough analysis of 13 variants of pre-draft projects with a military-economic assessment is carried out. As a result, the fourth of the presented options was selected with additional refinement of weapons and the amount of ammunition. At the end of 1971, the first presentation of the 956 project of the Navy Group of Companies ended with the continuation of the search for the best option. At the same time, there was information about the start of development of a likely opponent of the multi-purpose EM "Sprewens". This is where the development of the domestic multipurpose ship begins. The ship is renamed EM, and from 1971, it goes through the documents as a destroyer. The second presentation ended with the statement in the course of which the choice fell completely on the tenth of thirteen options:
- availability of a site for the Ka-252 type helicopter;
- Installation of the Uragan air defense missile system;
- launchers with anti-ship missiles Mosquito (8 units);
- AK-130 art installations;
- installation of a steam turbine power plant.

In the final version, instead of the selected power plant, a gas turbine power plant was selected. With all the modifications, the equipment and armament chosen, the displacement of the EM was increased by one thousand tons. The cost of the draft project cost the Soviet Union 165 000 rubles.

The middle of the year is 1973. Designers received a task to perform the technical project. Chief Designer V.Anikiev. All work on the technical project was ready by the end of 1973, although in the future there were various adjustments and clarifications. It turns out that it is impossible to install the planned boilers - they are replaced with steam KVN 98 / 64-PM. Also added a hangar and the possibility of refueling the helicopter. The total cost of the technical project is 205 thousand rubles.

Building an EM project 956
1.11.1973 of the year - the official date of construction of the newest domestic EM project 956. As planned, construction began at the plant named after A.Zhdanov. The working draft has also been developed by TsKB-53 by 1978. The total cost is more than 2 million rubles. For 1981, operational documentation and improvements were prepared for the project of the construction of the first ship (lead). 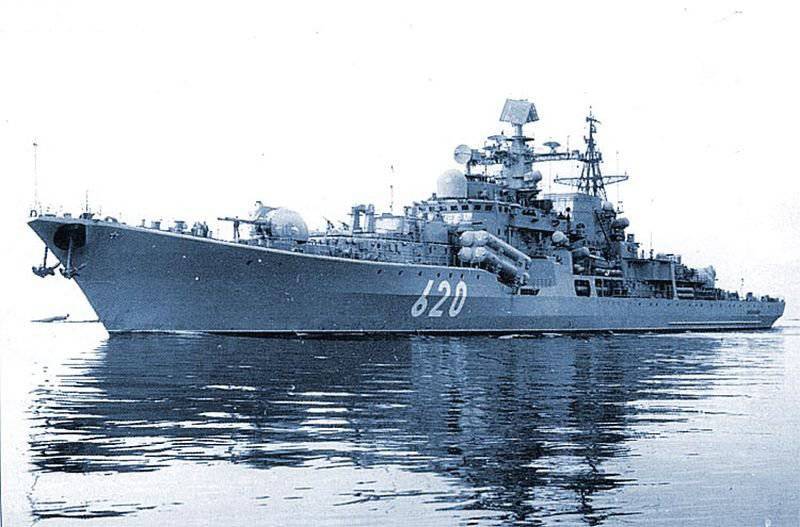 The lead ship begins to be built from the middle of the 1975 of the year - EM "Modern" under the serial number 861. In 1976, the EM series of the 956 project was reduced to 32 ships, in 1988, the series is reduced to 20 units. For all the time it was laid 22 destroyer, of which 17 entered the structure of the Navy of the USSR / Russia. 2 EM completed under the project 956-E for the Navy of China. 3 unfinished ship in 1990's were recycled. Before 1991, the 14 EM of the 956 project arrived at the Soviet Navy. The construction of one destroyer lasted an average 4 of the year. The average price of one destroyer is 90 million rubles at the beginning of the launch of the series and 70 million rubles by the middle of the series.

Device and equipment
The northern design bureau had a distinctive feature in the design of ships: they had an external propaganda effect. That is, by their own appearance, they were supposed to influence the enemy. At that time, the ships were used not only to perform combat missions, but were also an excellent tool for political influence and persuasion. Appearance was brought under the maximum functionality of airborne weapons and equipment. The EM of the 956 project are created along a long-deck construction with the sheer front of the ship. Sedlovatost and optimized hull contours provides nezalevaemost decks and wide firing angles for the AK-130. Decks are placed parallel to the waterline. To give the ship stability, the frames are installed with great collapse. The above-water part of the board is made with double scrapping to reduce the radar visibility.

The ship has 15 bulkheads, 16 compartments and 6 decks. The main body structures are low alloy steel. In places of high stress, steel sheets with increased fluidity are used. Superstructures of the ship consist of fore and aft blocks, and are made of aluminum and magnesium alloys. Riveting mount.

The EM of the 956 project is the only 3-generation destroyers with a power plant of the turbine type. The power plant consists of two KTA GTZA-674 echelon layout (feed / nose) horsepower 50000. To maintain the required speed at various operating modes, KTA has an ACS with a frequency regulator. In the forward part of the engine room there are two boilers with the right turbine, in the aft - two boilers with the left turbine and a shortened propeller shaft.

The first 6 units of the EM project 956 received steam boilers of the type “KVN-98 / 64”, giving 98 000 kilograms of steam. On the seventh and forth, steam boilers of the type KVG-3 were installed, giving 115 000 kilograms of steam. Excess or deficiency for air boilers is regulated by a special turbine or damper. The boilers become the weakest link of the destroyer - very demanding of the water supplied, quickly failed. Additionally, an emergency boiler is installed on the 14 000 kilogram of steam. To provide the ship with electric power, 2 of the steam-turbine generator type AK-18, with a total power of 2500 kW, and 4 diesel generators (reserve) of 600 kW each are installed. The steering unit is an electro-hydraulic machine and a semi-balance steering wheel. Two shafts and two low-noise fixed-pitch screws allowed the EM to reach speeds up to the 33.4 node. Fuel supply 1.7 thousand tons. Travel range from 1300 to 3900 miles.

Operating temperatures inside the case range from 34 to -25 degrees. There are 5 tanks for 50 cubic meters for waste collection. To receive the cargo on the move, the “String” device is installed on each board.

The crew of the ship in peacetime and wartime is respectively 296 and 358 people. To accommodate the crew on board there is an 21 cabin for officers (38 berths) and cabins for the midshipmen on the 48 berths. For sailors of military service there are 16 headquarters for 310 seats. All rooms have radio communication devices. Destroyers have libraries, film installations, gyms and even collapsible pools. The entire ship is provided with a single cable television system. There are an operating room, an ambulatory, an infirmary, an isolator and a sterile room in the medblock. Because of the established weapons and power installations, the aisles with the corridors are narrower than on the BNC of the 1155 project. 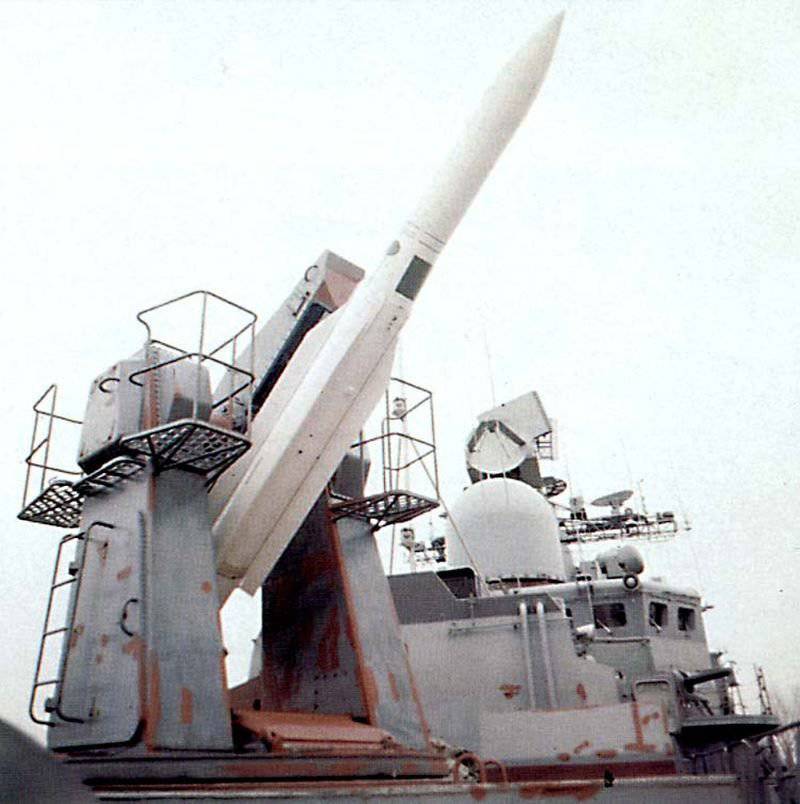 - Arture AK-130. Two twin AK-130 units are installed on board the ship. SU AK-130 - multi-channel MP-184, which includes a dual-band radar, television, laser rangefinder, digital computer, optical device. Installations have an optical device, an ammunition supply complex and interface equipment. The rate of fire to 90 rds / min, the range of destruction to 24 kilometers. Ammunition - 500 ammunition for each barrel (180 of them are ready for combat use). For shooting at coastal objects, a special special post is used. SU allows you to conduct only single-breasted application of artillery systems.
- Artcomplex AK-630M - air defense anti-aircraft complex. Consists of two 30-mm batteries of the AK-630M complex. One battery - two artillery installations with a rotating six-barrel unit and SU “Vympel”. Effective range of up to four kilometers. 4 fire rate 000 rds / min. The ammunition of the art complex - 16 thousands of ammunition. The probability of hitting the missile "Harpoon" - 0.4-1.0.
- SCRK "Mosquito". Anti-ship complex with Moskit missiles. Consists of 2 quad launcher blocks. Ammunition - 8 KR. The range of destruction - 120 kilometers. Speed ​​- up to 3M. The weight of the RC is almost 4 tons, the weight of the warhead is 0.3 tons. SU destroyer conducted a full volley for half a minute. Chance of defeat - 0.94-0.99; 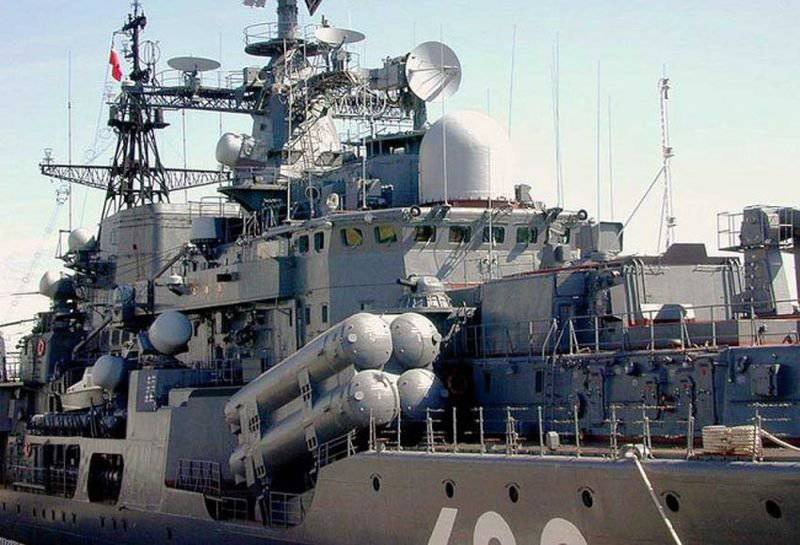 - RBU -1000 - anti-submarine / anti-torpedo weapons. Jet bomb with ammunition 48 RSL. The defeat range is up to one kilometer.
- 2 TA caliber 533mm. anti-submarine weapons. Used torpedoes SET-65 / 53М, USET-80.
- RM-1 / UDM / PM-1-mine armament. For use of mines installed mine rails. Ammunition 22 mines.
- KA-27PL / KA-25PL - aviation armament. To use the helicopter, the ship has a platform (middle of the ship) and a telescopic hangar. The onboard fuel supply allows the helicopter to have two refueling.
- 21-KM - salute guns. Two 45mm salute guns are installed in the bow of the ship (forecastle).