British AS-90 self-propelled guns for the Ukrainian army 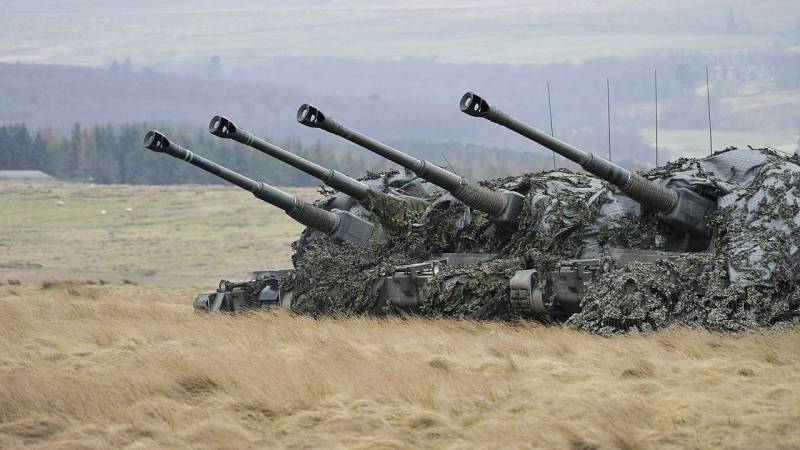 It became known that the UK is preparing a new package of military-technical assistance for Ukraine. Together with other products, it is proposed to transfer AS-90 self-propelled artillery mounts to the Ukrainian army. Such equipment, as expected, will have to strengthen the existing artillery and increase the combat capability of the recipient army. However, it is already clear that such assistance will face a lot of problems and will give only limited results.

According to unofficial data

According to The Times, at the end of March, the UK government held a closed meeting on future military supplies to Ukraine. During the event, they discussed what samples and products could be transferred to the "ally" to make up for the losses of recent weeks and increase the overall combat capability.

An unnamed source of The Times indicates that the Ukrainian army needs long-range artillery systems, and they should be included in the new aid package. In particular, the possibility of transferring a certain number of AS-90 self-propelled artillery mounts from the presence of our own army is being considered. 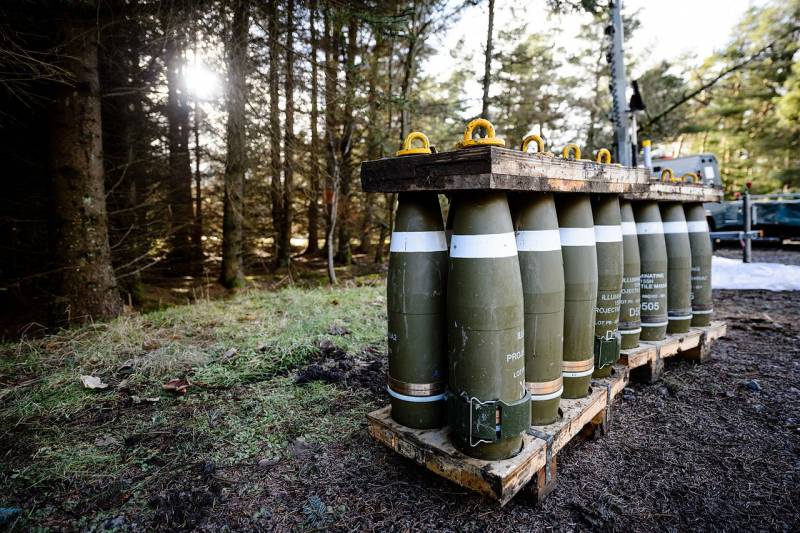 Shells in factory packaging
It is assumed that the supply of self-propelled guns will strengthen the Ukrainian artillery units. At the same time, the British army, having given up its self-propelled guns, should not face serious difficulties: the existing AS-90s are very old and should be replaced in the future. At the same time, potential problems are noted. Thus, the technique is complex, and the preparation of Ukrainian calculations will have to take a lot of time. In addition, London fears that the transfer of self-propelled guns will lead to an escalation of the conflict, which potentially threatens the UK.

Apparently, at the end of March, only the fundamental possibility of transferring the AS-90 was discussed. The number of such equipment, as well as the timing of its preparation and transfer to the Ukrainian army, The Times does not report. It is possible that these issues have not yet been resolved. Either London considered this issue and refused to supply self-propelled guns.

Anyway, since the publication News a week has passed, but Ukraine has not yet received AS-90 products. Information about the transfer of such armored vehicles has already appeared in some foreign media, but it is not confirmed and does not correspond to reality.

The promising ACS AS-90 (Artillery System 1990s) has been created since the mid-eighties by Vickers Shipbuilding and Engineering (now part of BAE Systems). The self-propelled gun was developed on an initiative basis in parallel with the "official" SP70 project - in case it failed. The Vickers forecast turned out to be correct, and in the early nineties, the AS-90 project received official status and support from the Ministry of Defense. 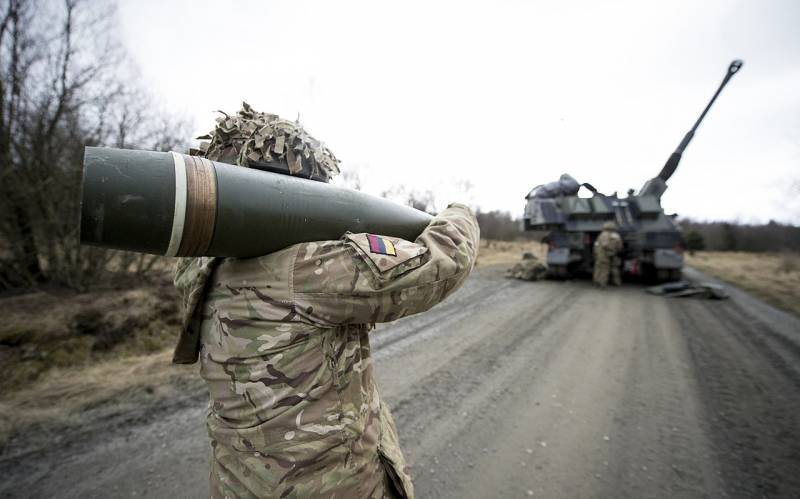 In the late nineties, a deep modernization project for the AS-90 called Braveheart was being developed. It offered a new gun with a longer barrel and improved performance, as well as a new set of electronic means. In terms of the combination of characteristics, such an ACS did not suit the British army. However, a few years later, on the basis of Braveheart, the Krab self-propelled gun was created for the Polish army. She reached the series and is still in service.

The British Ministry of Defense already believes that the AS-90 is obsolete and needs to be replaced. The appearance of a promising self-propelled guns for this was planned for the first half of the twenties, then it was postponed to the middle of the decade. According to current plans, the rearmament of artillery units will take place in 2029-32. At the same time, a new self-propelled gun to replace the existing one has not yet been developed.

The AS-90 is a tracked self-propelled gun of a traditional layout and is based on an armored hull with a full-rotation turret. The hull and turret are welded from armor plates that provide protection against bullets and shrapnel. The 45-ton machine is equipped with a 600 hp diesel engine, which allows it to reach speeds of up to 55 km/h on the highway and overcome various obstacles. 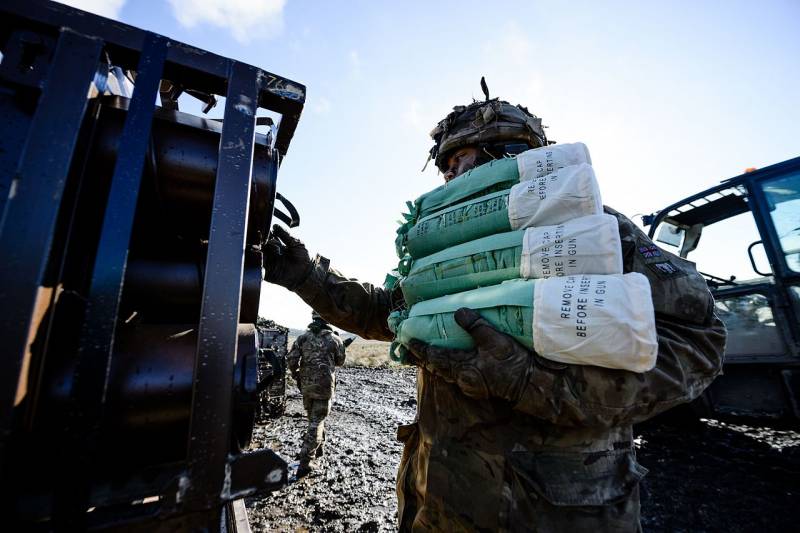 Artilleryman with caps
The main armament of the self-propelled guns is a 155-mm L31 rifled howitzer. It is equipped with a 39 klb barrel with a muzzle brake, an ejector and a piston breech. The design of the tower provides a circular guidance horizontally and elevation angles from -5° to +70°. Drives - electric with backup manual.

The howitzer uses separate loading shots with a propellant charge in the cap. Ammunition - 48 shots. The shutter has a built-in magazine for 18 primers. There are high-explosive "ordinary" and active-rocket projectiles, smoke, incendiary, etc.

Loading is done manually, which affects the rate of fire. It is possible to perform a volley of 3 shots in 10 seconds. Also, for several minutes, the crew can maintain a rate of fire of 6 rds / min. With prolonged firing, the rate does not exceed 2 rds / min.

The howitzer can fire both direct fire and from concealed positions. When using conventional shells, the firing range reaches 24,7 km. An active-rocket projectile flies 30 km. 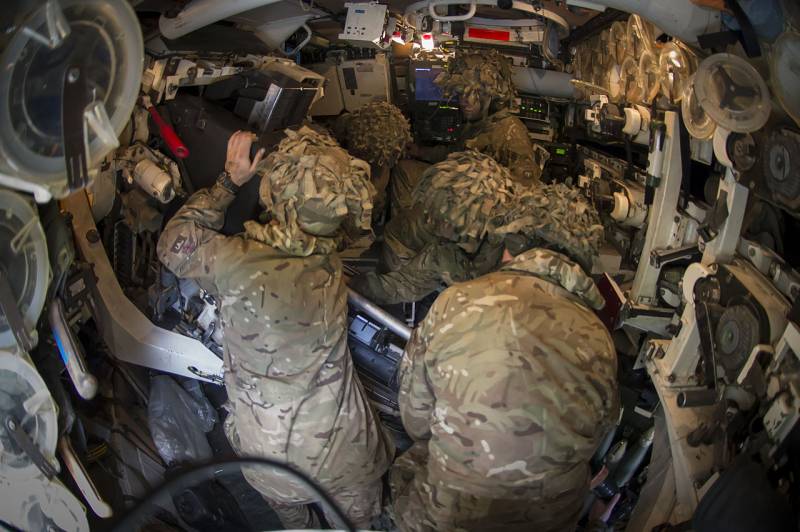 Crew in the fighting compartment. View from the port side
The crew of the combat vehicle consists of five people. This is a driver, commander, gunner and two loaders. This composition of the crew allows you to move between positions and fire using portable ammunition. If necessary, the calculation is increased by 5 people who help with the supply of ammunition from the conveyor or from the ground.

In general, the AS-90 is a typical self-propelled gun of the last years of the Cold War. It shows fairly high performance characteristics, but is inferior to later samples, incl. created almost simultaneously with it. Nevertheless, despite all the limitations, such a technique is quite capable of solving combat missions and hitting distant targets.

Under the current conditions, British self-propelled guns should be of great interest to Ukraine. However, the transfer of such equipment is bound to face a number of difficulties and problems. They can lead to the cancellation of the shipment or limit the real benefit of the new equipment for Ukraine.

First of all, the UK needs to resolve issues of politics and its own defense. The delivery of AS-90s to Ukraine could have a negative impact on the military-political situation in Europe and lead to new risks for London. Is it worth it is the big question. In addition, the benefits of helping Ukraine should outweigh the consequences of reducing its own fleet of self-propelled artillery. 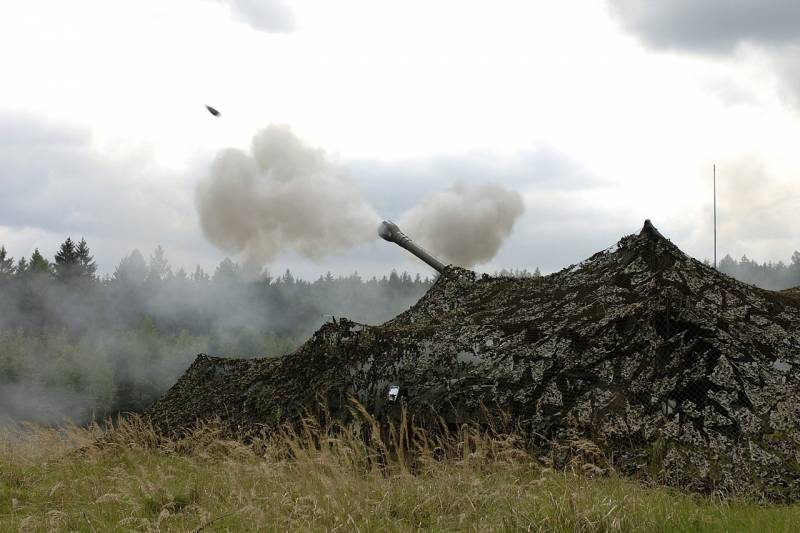 Artillery units on the AS-90 have reportedly faced significant challenges in recent years. The equipment is of considerable age and needs to be maintained in an acceptable condition. At the same time, some of the necessary spare parts and assemblies have already been discontinued, and stocks are coming to an end. This forces one to resort to the "cannibalization" of some machines in favor of others. As a result, at least a third of the park is not ready for operation and needs to be restored.

The preparation of armored vehicles for the transfer of a friendly army must face new technical difficulties. In addition, combat-ready self-propelled guns will have to be transferred - which are barely enough for their own needs.

We will have to resolve the issue of supply of ammunition. The 155 mm L31 howitzer uses British standard rounds, which are not available in Ukraine, but without them, AS-90 self-propelled guns have no combat value. In addition, for effective combat work, shots are required in large quantities. This in a certain way complicates the organization of military-technical assistance.

A separate problem will be the training of crews. Ukrainian artillerymen need to be retrained for foreign-standard equipment, and this must be done with high quality and in the shortest possible time. At the same time, the British army itself is experiencing difficulties in training its crews. Practice shootings are held only a few times a year and with a limited consumption of projectiles. Training of foreign military in such conditions will face difficulties. 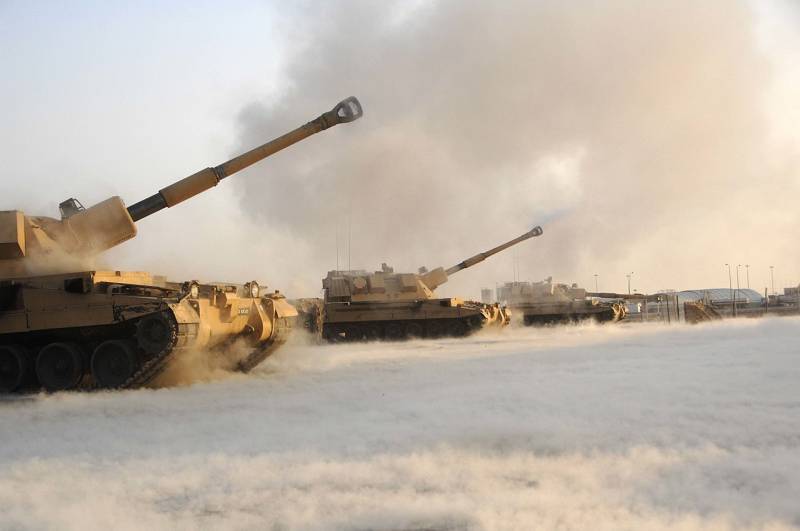 However, the successful solution of all these problems will not actually yield any results. Once on Ukrainian territory, British self-propelled guns will become the target for Russian strikes. The Russian army has all the necessary means for reconnaissance and detection of targets with their subsequent defeat. To date, she has destroyed the bulk of Ukrainian self-propelled artillery, and foreign equipment is waiting for the same fate.

Thus, Great Britain indicated the possibility of helping Ukraine with the supply of armored vehicles, incl. self-propelled artillery. However, the implementation of such proposals will face a host of problems and difficulties, each of which will require time and effort. At the same time, each of these factors can disrupt all plans for the supply of equipment.

Whether the UK will send its self-propelled guns to Ukraine is not yet completely clear. However, it is already clear that such a step does not make much sense. Whether this is understood in London is a big question. Perhaps they have already evaluated such a proposal and made conclusions. What opinion they came to will become clear in the near future.