Libya: not to leave witnesses alive

October 1 2012
43
26 September it became known that the Libyan “revolutionary” by the name of Omran Juma Shaan, who, together with his three friends, also fighters for freedom and democracy, were tortured and tortured for a long time in Bani Walid, died in a French hospital.

The named Libyan city both was and remained an outpost of forces loyal to Colonel Gaddafi. The people of Bani Walid are loyal to the dead Muammar. Should not 20-year-old Shaaban appear near Bani Walid. I would have sat in Misrata and would not stick my nose out. Or you would go to France - Libyan "democrats" are traditionally given compliments there. But no: it was necessary to wander around Libya, to be photographed with Gaddafi’s golden gun. So I jumped. Not even managed to get eight hundred thousand dollars, promised for the capture of Muammar. However, no one was going to pay them. 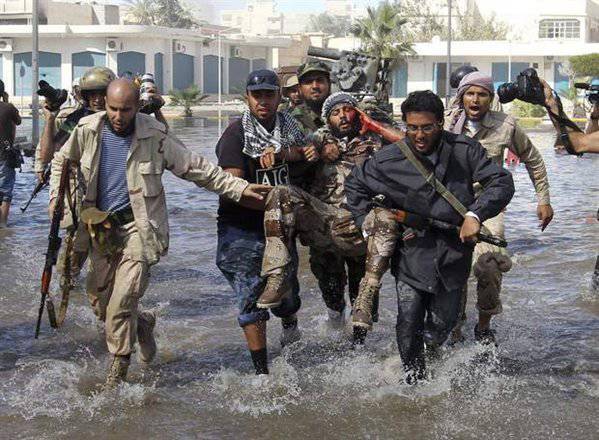 In early September, the interim ruler of Libya, Mohammed Yousef al-Magref, “secured” the liberation of Shaaban and his two friends. As for the third liberator-liberator, little is known about him: whether he is still held hostage, or he hasn’t endured the humane treatment of the jailers.

Shaaban, who showed signs of life, was taken to Paris, where he ordered to live long last Tuesday. Rescuers immediately spread their hands: this, they say, can not cure. Is this why the interim head of Libya got so easy a “revolutionary”? They knew in Bani Walid that they would not last this half-dead for long. And advanced capitalist doctors will not save.

Young Shaaban was not the first in a chain of corpses into which Gadhafi’s killers, one after another, began to turn. Earlier Shaabana under mysterious circumstances died some more participants of the capture and murder of Gaddafi in Sirte.

In Misrata, they grieved for Shaaban: 10.000 people came to the city stadium.

You can file this news so: "In the Libyan city of Misrata, we said goodbye today to one of the participants in the operation to capture Muammar Gaddafi" (Echo of Moscow).

And it is possible commercials:

Omran Jumaa Shaaban was taken to France for treatment, where he died last Tuesday in a Paris hospital. You can imagine what he experienced during the captivity. How many thousands of times did he curse his interest in the drainage pipe, where Gaddafi was trying to hide? How many times did Omran Jumaa Shaaban change his sexual orientation? What delights experienced the hard way? The East, as is known, is a delicate matter.

It should be noted that Omran Juma Shaaban is not the first participant in the seizure, humiliation and subsequent brutal murder of Muammar Gaddafi, who got what he deserved. This avengers are regularly destroyed by the public ”(Segodnya.ru).

The Avengers for Gaddafi are hypothesis Nikolai Starikov: “For the death of Muammar Gaddafi revenge. These avengers are representatives of the tribe of Qadhaf, to which the brutally murdered leader of Libya belonged. They killed the American ambassador. And they got another killer Gaddafi. "

I do not know. Too easy. Rather, the power in Libya, albeit far from strong, is almond with people from Bani Walid, not only because it is weak and temporary, but also because it is interested in the death of the witnesses to the killing of Gaddafi. Maybe she doesn’t want this shameful murder involving torture and humiliation to go into history with all the details, maybe it doesn’t want those in the world who owed 800 thousand US dollars to live in the world.

So what kind of a revolution is it, if Bani Walid decides for Tripoli, and you have to negotiate the extradition of prisoners with the city of caddaphists? And it turns out to agree only because the prisoners are no longer suitable even for hospital patients? How do you, Mister Americans, such a democracy? You, apparently, do not conduct negotiations with terrorists?

The weakness and indecision of the Libyan government confirms the following fact.

September 22 power of Libya made a decision on the dissolution of armed groups in the country. Under the elimination fall all groups whose activities are not regulated by the Government of Libya. In Benghazi, a special headquarters has been established, which will include representatives of the army, the Ministry of Internal Affairs and legal armed groups subordinate to the Ministry of Defense. He will coordinate the disbanding of the armed units. So - mercilessly and unconditionally.

But what is this solution built on?

Militants decided to leave the political arena (temporarily, I suppose) a day after the residents of Benghazi, unhappy with the excessive influence of members of armed groups, attacked the Islamist base from Ansar al-Sharia. Bottom line: 11 dead and 70 injured.

The government, having heard of self-dissolution, decided to earn a political point: to announce the cessation of the activities of armed groups. Dissolution of self-dissolved - truly Solomonic solution.

As for the city of Bani Walid, there, besides a hundred thousand inhabitants, there are many, many weapons, including guns and grenade launchers. Ammo, too, of course, is. And also a lot. Whole warehouses. It is possible that it was the local rocket launchers that killed the ambassador of the USA, Christopher Stevens. The population of the city does not recognize the new government: they do not care that in Libya there is a new anthem, and in schools children continue to study according to the old programs. There is still Jamahiriya, there is the spirit of Gaddafi.

The power in Libya is wandering also because of the collapsing economy, because of which the entire state can collapse. (The Americans only need this). Cyrenaica in Libya claims independence - because of the oil. What the Gaddafi was able to reconcile is lost by the current temporary workers.

According to Yevgeny Satanovsky, the Libyan authorities are completely incapacitated and "do not have a share of the political charisma and organizational abilities that Muammar Gaddafi had."

However, they, apparently, have enough of these organizational abilities for some work.

The version of the destruction of the authorities witnesses the murder of Colonel Gaddafi puts forward Eugene Super, columnist "But": “... If the case goes like this, then not a single witness to the seizure of the colonel will remain alive (if there are any). All this suggests that under the cover of the legend of the revenge of the “Gaddafists”, the witnesses of the incident are methodically removed. ”

So, the witnesses are destroyed, or everyone has already been killed, while the Libyan Provisional Government, meanwhile, declares its “loyalty” to the United States.

Mohammed Yousef Al-Magref at the UN General Assembly in New York apologized personally in front of the US Secretary of State for the attack of militants on the American consulate in Benghazi. Mr. Al-Magref said: “What happened on September 11 in Benghazi does not in any way reflect the wishes and hopes of the Libyan people, or their attitude towards the people of the United States. We are ready to cooperate with the US government to bring to justice those responsible for the death of American citizens in Libya. "

Hillary Clinton, in response, called the Libyan government a loyal partner of the United States and said thanks to al-Magref for assistance in investigating the tragedy.

That's how pathetic was broadcasting from the rostrum of the General Assembly, the interim ruler of Libya: “I stand before you today, before the whole world, to ask for forgiveness for the damage that the despot caused, for the crimes he committed against so many innocent people, for the torture and terrorist attacks to which he many countries. "

One word - "faithful partner." Even almost a friend, comrade and brother.

And the "Arab Spring" in his ardent speech, he approved the.

However, the east indeed is a delicate matter. Al-Magref further behaved strangely, not at all as a “faithful partner.” 29 September it became known: the security authorities of Libya refused to allow the US to allow FBI investigators into the country (recall, brave special agents were afraid to fly to Benghazi, but agreed to conduct an investigation remotely from Tripoli).

Libyan government заявилоthat no foreign investigators will work on the territory of the country, and the government will conduct an investigation on its own.

Forces, he, of course, does not hold.

It is important to know some details. Mohammed al-Magref said that among the participants in the attack on the consulate general were foreigners who came from various places, for example, from Mali and Algeria. The investigation has already concluded that the scandalous film “The Innocence of Muslims” is a false reason, and the attack on the consulate was planned in advance - just “by foreigners who had infiltrated Libya several months ago.”

These incomprehensible “foreigners” suggest that the Libyans are going to announce the non-involvement of the honest Libyan people in the murder of Americans. No, the authorities have not conceived such an outcome of the case, because they secretly sympathize with armed Gaddafists, but because they fear that, like in the case of arrest, Libyans would not break out new pogroms. The power is weak, and Libya is falling apart. There are a lot of weapons in it, left over from Gaddafi. And it periodically shoots - then bullets, then grenades. So the government itself does not feel safe. While the Magref confesses to the White House of love and friendship, but being polite with the inhabitants of the city of Bani Walid and allows bullets to the ambassadors of America and poison them with smoke, he, Magref, will remain alive and healthy on the throne.

By the way, at the UN General Assembly, the only person from Africa found the courage to publicly speak out against the "loyal partner" of the USA, Mr. Al-Magref. It was, of course, one of the few dictators who survived on the planet - 87-year-old Robert Mugabe, ruler of Zimbabwe. This worthy man saidthat the difference between the killings of Gaddafi and Ambassador Stevens is not.

A week ago it became known that a few days after the assassination of Ambassador Stevens, CNN reporters found in Benghazi diary of an American diplomat. On seven pages, the ambassador wrote that extremist movements were gaining strength in Libya and it was becoming unsafe to be here.

It is not safe to be an American at all. Though in Libya, even in Egypt, even in Pakistan, even in Tunisia or Sudan. Even in Australia, they are now protesting against the Americans. Nobody loves them.

Once in Afghanistan, in Soviet times, the CIA was involved in organizing and financing the Al Qaeda prototype. Bin Laden has managed to pretend to be a friend of America. Now Washington is sponsoring and promoting the Arab Spring, as a result of which radical Islamists are coming to power. The White House wonders why Libya is not letting the EFBA members, and Egypt, where Islamist Mursi is ruling and where there were major anti-American protests, Barack Obama even decided not to consider him an ally anymore.

Do not you even meddle in Syria, eh?

No, all the same, Hillary Clinton insists: "Bashar Asad must leave." And al-Qaeda in Syria is right there.

“Leave” is like a spell. They walk with him around the world, destroying, burning, ruining, and they believe that flowers bloom behind.